Methods: Western blot was used to define the ELISA results of serum anti-p53, HRAS, NSG1-IgG and anti-TIF1γ-IgA. The performances of anti-p53, HRAS, NSG1-IgG and anti-TIF1γ-IgA were evaluated by ELISA for the early diagnosis of CC with 601 serum samples of 157 patients with CC at early stage, 144 patients with CC at advanced stage, 130 patients with CBL, and 170 HC, and then the performances of different combinations of four autoantibodies were analyzed for the development of an optimal panel for the early diagnosis of CC.

Conclusions: Serum IgG autoantibodies against p53, HRAS and NSG1, and IgA autoantibody against TIF1γ show the diagnostic value for the patients with CC at early stage, of which anti-TIF1γ-IgA is demonstrated to be a preferable biomarker, and an optimal panel comprised of anti-p53, HRAS-IgG and anti-TIF1γ-IgA might contribute to the further improvement of early diagnosis for CC.

Colon cancer (CC) is a common malignant tumor that seriously endangers human life and health. Globally, the incidence of colon cancer ranks 3rd in males and 2nd in females among all malignancies [1]. Early diagnosis and timely surgical radical resection are of great significance for the prognosis of CC patients. Previous studies have shown that 5-year survival in patients with early CC who undergo surgery could reach as high as 97% [2]. Unfortunately, due to the absence of apparent symptoms at the early stage, most of the patients present in the late stage of the disease, missing the best period for surgery.

As the traditional diagnostic method for colon cancer, fiber endoscopy and pathological tissue biopsies are applied in clinic for early CC detection, however, relatively complex operation, highly technical expertise requirement and uncomfortable invasive experience limit their application in the screening of asymptomatic populations. Therefore, improving the efficiency of early diagnosis of CC is becoming a clinical challenge [3]. Serological biomarkers have been highly recommended in the screening for early CC due to non-invasive, convenient and safe advantages; nevertheless, current conventional tumor antigen markers (Carcinoembryonic Antigen (CEA), CA19-9 and CA724, etc.) meet a different degree of detection sensitivity or specificity problems, which limit their clinical value for diagnosing CC [4]. Therefore, finding new serological markers for the early diagnosis of CC is essential.

Recent advances have demonstrated that autoantibodies against tumor-associated antigen (TAAs) exist in sera of 80% of cancer patients 3-5 years prior to the manifestation of clinical symptoms [5]. Hence, autoantibody detection is expected to dramatically aid in the diagnosis of malignancies at early stage [5-6]. Recently, using an approach based on HuProt array (v3.0; 20240 individual human proteins, provided by the High-throughput Biology Center of Johns Hopkins Medical College, USA), we successfully discovered and validated a total of eight IgG autoantibodies against p53, ETHE1, CTAG1A, C1QTNF1, TEX264, CLDN2, NSG1, and HRas, for lung cancer diagnosis at early stage [7]. In addition, in agreement with the advances of serum IgA autoantibodies for the diagnosis of some malignancies [8-9], we also performed the screening of serum IgA autoantibody biomarkers by HuProt array and found some IgA autoantibodies with good diagnostic value for early lung cancer, of which IgA antibody against TIF1γ was demonstrated the optimal diagnostic performance for the patients with lung cancer at early stage by validation of ELISA assay [10].

157 patients with colon cancer (CC) at early stage (TNM 0/I/II stage), 144 patients with CC at advanced stage (TNM III/IV stage), 130 patients with colon benign lesion (CBL), and 170 healthy controls (HC) were recruited from February 2016 to December 2018 at Fujian Provincial Hospital. All patients strictly met the diagnostic standards recognized by international or professional societies and none of the patients had accepted any treatment for the malignancy; the clinical and pathological data were shown in Table 1. 170 HC participants received health examinations from the physical examination centre of Fujian Provincial Hospital and showed no evidence of disease, including malignancies, CBL, etc., based on the colonoscopy. All CBL and CC patients were confirmed by pathological examination of tissue biopsies under the colonoscopy. Each subject was collected 5 ml peripheral blood before the surgery and the serum was separated at 3000 rpm for 5 min and stored at -80 °C before use. This study was approved by the Institutional Review Board of Fujian Provincial Hospital, and all participants provided written informed consent.

Clinical data for the early CC, CBL and HC groups

Formalin-fixed, paraffin-embedded 3-mm thick sections were deparaffinized and rehydrated, and then the sections were, respectively, incubated with primary antibodies against p53 (Abcam, UK) (1:100), HRAS (Abcam, UK) (1:100), NSG1 (Abcam, UK) (1:200), and TIF1γ (cell signaling technology, USA) (1:1000) for 18 h at 4 °C to carry out the standard IHC staining as described previously [10]. The outcome of IHC staining for 30 pairs of CC tissues and matched paracancerous tissues, randomly selected from 157 cases with CC at early stage, was manually evaluated and scored by two independent certified pathologists. The intensity of staining was graded as: 0 = undetectable, 1+ = weak staining, 2+ = moderate staining and 3+ = strong staining.

200 ng of denatured GST-tagged recombinant proteins, p53 (71 kDa), HRAS (46 kDa), NSG1 (48 kDa), and TIF1γ (150kD) at (expressed by yeast and provided by CDI Laboratories, Inc., USA) and 50 ng of denatured GST protein (26 kDa) were subjected to vertical electrophoresis on 12% SDS-PAGE at 20 mA, respectively. The separated proteins were electrotransferred onto the nitrocellulose membrane and incubated with sera (1:500 dilution for anti-p53, HRAS, NSG1-IgG detection, 1:100 dilution for anti-TIF1γ-IgA detection) or rabbit anti-GST antibody (Cwbiotech, China) (1:2000) at 4 °C overnight and the membranes were incubated with horseradish peroxidase-conjugated anti-human IgG (Cwbiotech, China) (1:5000), and anti-human IgA (Jackson Immuno, USA) (1:5000) to carry out the standard western blot assay as described previously [11]. The immunoreactivity was visualized by chemiluminescence imager (BioRad, USA).

50 ng GST-tagged recombinant proteins, p53, HRAS, NSG1, and TIF1γ were coated onto 96-well plates at 4 °C overnight, respectively, and then the nonspecific binding was blocked by 3% BSA at 37 °C for 1 h. The wells were incubated with serum samples (1:500 dilution for anti-p53, HRAS, NSG1-IgG detection, 1:100 dilution for anti-TIF1γ-IgA detection) at 37 °C to carry out the standard ELISA assay as described previously [10], and immunoreactivity was measured by reading the A450. All assays were performed in duplicate, and the averaged OD value was calculated.

SPSS 22.0 statistical software was used to analyze the experimental data. For individual autoantibodies, cut-offs based on mean+2SD of HC group were used and 95% binomial confidence intervals were calculated for positivity percentage (sensitivity). For a panel of autoantibodies, CC designation was made if each autoantibody level exceeded the mean+2 SD of HC group. Χ2 test was used for the comparison of rates between groups, and Mann-Whitney U-test was used for group comparisons. Graphpad Prism 5 and Medcalc v18.11 were used to draw charts and ROC curves, respectively. P <0.05 was considered a significant difference. 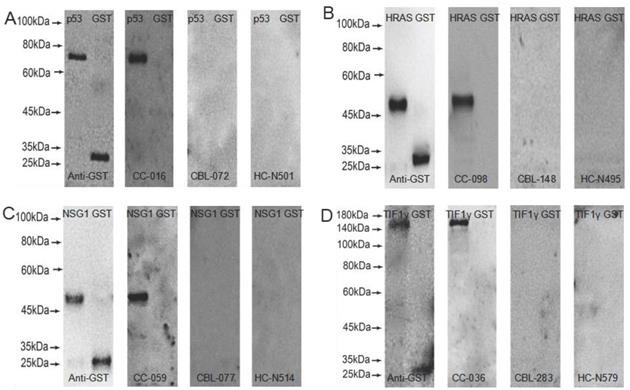 Development of an optimal autoantibody panel

Considering the comprehensive evaluation of the performances among all possible combinations of four autoantibodies, a panel of anti-p53, HRAS-IgG and anti-TIF1γ-IgA showed the highest AUC for the patients with CC at early stage, up to 0.737 (95%CI 0.690-0.781), with 47.1% sensitivity at 92.0% specificity (Table 4). 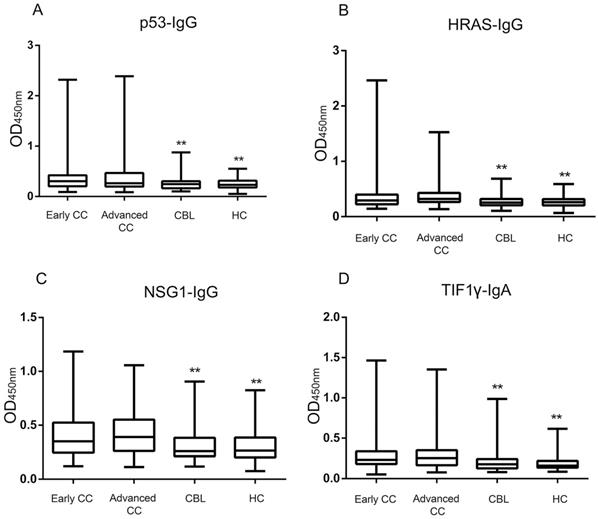 Notes: ** indicate the highest AUC among all possible combinations of four autoantibodies;

An increasing number of evidences have represented that large amounts of autoantibodies could be released into sera due to the trigger of humoral immune responses for TAAs during early tumorigenesis. As compared with the TAAs in sera, serum autoantibodies against TAAs have demonstrated superior sensitivity for the early diagnosis of cancer in asymptomatic patients; additionally, TAAs-associated autoantibodies present high stability and persistence in sera, and are easy to detect [12]. These excellent characteristics make it possible for TAAs-associated autoantibodies to serve as promising serological markers for the diagnosis of early CC [6]. Especially mentioned, all TAAs related with four autoantibodies in this study are presented to be closely related with tumorigenesis. p53, a well-known tumor suppressor gene, is reported to be often mutated and overexpressed in various cancers, including CC [13-15], and responsible for the regulation of cell processes including cell cycle, apoptosis, senescence, and DNA repair [16-17]. HRAS is a member of the ras oncogene family, whose mutations are involved in the occurrence of bladder, thyroid, salivary ductal, epithelial-myoepithelial, and kidney cancer [18-19]. NSG1, an endosomal protein expressed in neuronal cells, is reported to be a transcriptional target of p53 based on the observation that some non-neuronogenous cancer cells can express NSG1 in a p53-dependent manner under the effect of hydrogen peroxide, doxorubicin, UV, and γ-ray. Furthermore, NSG1 overexpression presents the obvious effects on cell proliferation inhibition and cell apoptosis induction [20]. TIF1γ, also known as TRIM33, ECTO, PTC7, and RFG7, is a regulatory factor of the TGF-β/Smad pathway by inhibiting Smad4 [21-22]. Recent existing studies have revealed that TIF1γ could play key role in the process of tumorigenesis by regulation of cell proliferation, differentiation, migration and invasion [23]. By IHC staining, all four TAAs in this study are demonstrated to be highly expressed in tumor tissues of early CC patients at the protein level, which might contribute to the aberrant release of autoantibodies in sera of patients with CC at early stage. Of four TAAs-associated autoantibodies, anti-p53-IgG is reliably detectable in sera of patients with CC [24]; however, the other three autoantibodies, anti-HRAS, NSG1-IgG and TIF1γ-IgA, have not yet been described in the CC diagnosis. 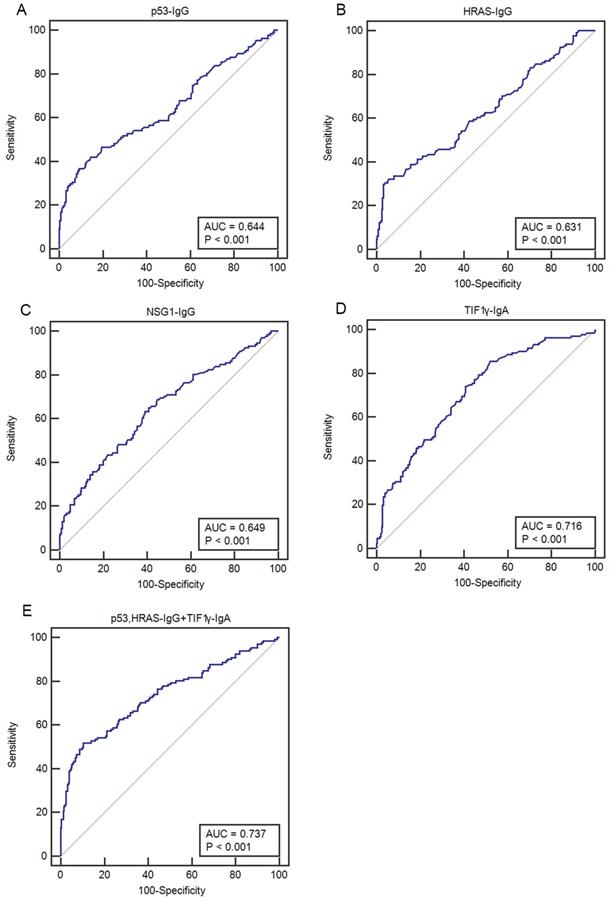 In view of the sensitivity of individual detection of serum anti-p53, HRAS, NSG1-IgG, and anti-TIF1γ-IgA is relatively limited, we evaluated all possible combinations of these four autoantibodies. Encouragingly, the combination comprised of three autoantibodies, anti-p53, HRAS-IgG, and anti-TIF1γ-IgA, was determined to be an optimal panel for the diagnosis of early CC, supported by its potential of improving AUC to 0.737, with up to 47.1% sensitivity at 92.0% specificity for early CC. Finally, to the best of our knowledge, the diagnostic value of this panel of anti-p53, HRAS-IgG, and anti-TIF1γ-IgA for early CC should be further proven by a multi-center research in the future and the further studies would be expected to carry out to excavate more valuable IgG and IgA autoantibodies to enhance the sensitivity and specificity for the diagnosis of early CC, so as to further improve the early diagnostic efficiency and 5-year survival rate of CC.