Background: To maintain the normal pregnancy, suppression of inflammatory signaling pathway is a crucial physiologic response. Dexmedetomidine has been used for labor analgesia or supplement of inadequate regional analgesia during delivery. And it has been reported that dexmedetomidine has an anti-inflammatory effect. In this study, we examined the influence of dexmedetomidine on the expression of cyclooxygenase-2 (COX-2), prostaglandin E2 (PGE2) and inflammatory cytokines in lipopolysaccharide (LPS)-stimulated human amnion-derived WISH cells. In addition, we evaluated the association of mitogen-activated protein kinase (MAPK) and nuclear factor kappa B (NF-κB) pathway in anti-inflammatory effect of dexmedetomidine.

Methods: Human amnion-derived WISH cells were pretreated with various concentrations of dexmedetomidine (0.001-1 µg/ml) for 1 h and after then treated with LPS (1 µg/ml) for 24 h. MTT assay was conducted to evaluate the cytotoxicity. Nitric oxide (NO) production was analyzed using Griess-reaction microassay. RT-PCR was performed for analysis of mRNA expressions of COX-2, PGE2, tumor necrosis factor (TNF)-α and interlukin (IL)-1β. Protein expressions of COX-2, PGE2, p38 and NF-κB were analyzed by western blotting.

Conclusion: We demonstrated that dexmedetomidine pretreatment suppressed the expressions of inflammatory mediators increased by LPS. In addition, this study suggests that anti-inflammatory effect of dexmedetomidine on WISH cells was mediated by the inhibitions of p38 and NF-κB activation.

The endogenous levels of prostaglandins (PGs) in the endometrial decidua of pregnant women are 200-fold lower than that of non-pregnant women [1]. The selective epigenetic silencing of the key inflammatory chemokine genes that attract T cells in the decidual stroma is maintained during normal pregnancy [2]. The suppression of inflammatory signaling pathways is critical for maintaining normal pregnancy. The levels of PGs in the plasma, urine, and amniotic fluid increase before the onset of labor leading to the rupture of the fetal membrane, cervical dilatation, and myometrial contractions [3, 4]. The administration of exogenous PGs or the failure to inhibit PG production can result in spontaneous abortion [5]. Besides PGs, nitric oxide (NO) is one of the factors involved in the maintenance of normal pregnancy. NO is a short-lived free radical generated from L-arginine and preserves the uterine relaxation during pregnancy [6, 7]. Although NO is known as a relaxing factor in the myometrium, it is not clear how NO production is altered by an inflammatory response.

LPS is the most abundant component of the outer membrane of gram-negative bacteria. It is a key stimulator of acute inflammatory responses and triggers the release of various pro-inflammatory cytokines including tumor necrosis factor-alpha (TNF-α), interleukin (IL)-1β, and IL-6 [12-14]. Toll-like receptor 4 (TLR4) is an innate LPS-pattern recognition receptor that is important for a rapid immune response and proper bacterial clearance [15]. During LPS-induced inflammatory response, the binding of LPS to TLR4 leads to the activation of the mitogen-activated protein kinase (MAPK) and nuclear factor kappa B (NF-κB) signaling pathways [16,19]. LPS also enhances the production of the cyclooxygenase‑2 (COX-2) that is essential for the production of PGs [18]. Based on this evidence, we treated WISH cells with LPS to induce an inflammatory response and expected that activation of MAPK and NF-κB may be affected by the LPS-induced inflammatory process.

Dexmedetomidine is a highly selective α-2 adrenoreceptor agonist that has been used for achieving sedation, anxiolysis, and analgesia in intensive care units (ICUs) or during operative procedures. Compared to other sedative drugs, dexmedetomidine has a low risk of respiratory depression [19,20]. Consequently, the use of dexmedetomidine in ICUs and procedural sedation has increased. Previous studies reported that dexmedetomidine has anti-inflammatory effects; dexmedetomidine was shown to decrease the secretion of inflammatory cytokines and consequently suppress inflammatory responses in animal experiments and clinical studies [21,22]. Dexmedetomidine can be administered to pregnant women for labor analgesia when the patient refuses epidural or spinal anesthesia or as a supplement to inadequate epidural analgesia. However, physicians are reluctant to use dexmedetomidine in pregnancy because of the possibility of uteroplacental transfer and the effects on the fetus [23].

A commercially available formulation of dexmedetomidine hydrochloride (KyongBo Pharm, Chungnam, Korea) was used in this study. The formulation was diluted with the culture medium and added to the cultures at concentrations of 0.001, 0.01, 0.1, and 1 μg/mL and incubated for 1 h followed by treatment with the growth medium or 1 μg/mL LPS (Sigma, St. Louis, MO, USA) for 24 h.

To evaluate the effect of pretreatment with dexmedetomidine on the production of NO in LPS-treated WISH cells, the Griess reaction microassay (Cell Signaling Technology) was performed. WISH cells were seeded on 24-well plates at a density of 1 × 104 cells/well. The concentration of NO in the culture supernatant was estimated from the concentration of nitrites (NO2-) that are stable end-products of NO metabolism. WISH cells were pretreated with dexmedetomidine at concentrations ranging between 0.01 and 1 μg/mL for 1 h and subsequently incubated with 1 μg/mL LPS for 24 h. Following incubation, the supernatants were collected and mixed with an equal volume (1:1) of Griess reagent. The samples were incubated at room temperature for 10 min and their absorbance was measured at 540 nm using a microplate reader (Bio-Rad Model 680; Bio-Rad, Hercules, CA, USA).

WISH cells were seeded in 24-well plates at a density of 1 × 105 cells/well and cultured for 24 h at 37 °C in an incubator with an atmosphere of 5% CO2. The cells were subsequently exposed to dexmedetomidine at concentrations ranging between 0.001 and 1 μg/mL for 3 h. Following dexmedetomidine treatment, the MTT [3-(4,5-dimethylthiazol- 2-yl) -2,5-diphenyl tetrazolium bromide; Affymetric, Inc. USB, OH, USA] assay was performed by adding 100 μL MTT solution (5 mg/mL in PBS at pH 7.4) to each well and incubating at 37 °C. The medium was removed after 1 h and 100 μL dimethyl sulfoxide (DMSO; Biosesang, Seongnam, Korea) was added to each well. The plate was gently rotated on an orbital shaker for 15 min to dissolve the precipitate. The absorbance was measured at 540 nm with a microplate reader (Bio-Rad Model 680). All the experiments were performed at least three times.

Data are presented as the mean ± standard deviation (SD). All the experiments were repeated at least three times. The statistical analyses were performed using the SigmaPlot v10 software. P value of < 0.05 was considered to be statistically significant.

Cytotoxicity of LPS and dexmedetomidine pretreatment in WISH cells

Effect of LPS and dexmedetomidine pretreatment on cytotoxicity in WISH cells was measured by MTT assay. Data are presented as mean ± SD. All experiments were repeated three times. DEX: dexmedetomidine. 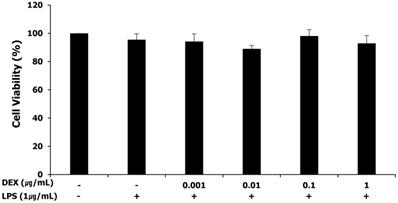 NO production in LPS-treated WISH cells after dexmedetomidine pretreatment

NO production was measured as nitrites by the Griess-reaction microassay. WISH cells basally released nitrites into the culture medium. The release of nitrites was not affected by LPS and pretreatment with dexmedetomidine at all concentrations (Figure 2).

Effect of dexmedetomidine pretreatment on NO production in LPS-treated WISH cells was investigated by the Griess-reaction microassay. Data are presented as mean ± SD. All experiments were repeated three times. DEX: dexmedetomidine. 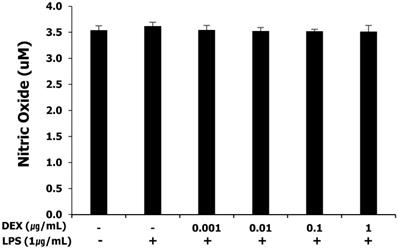 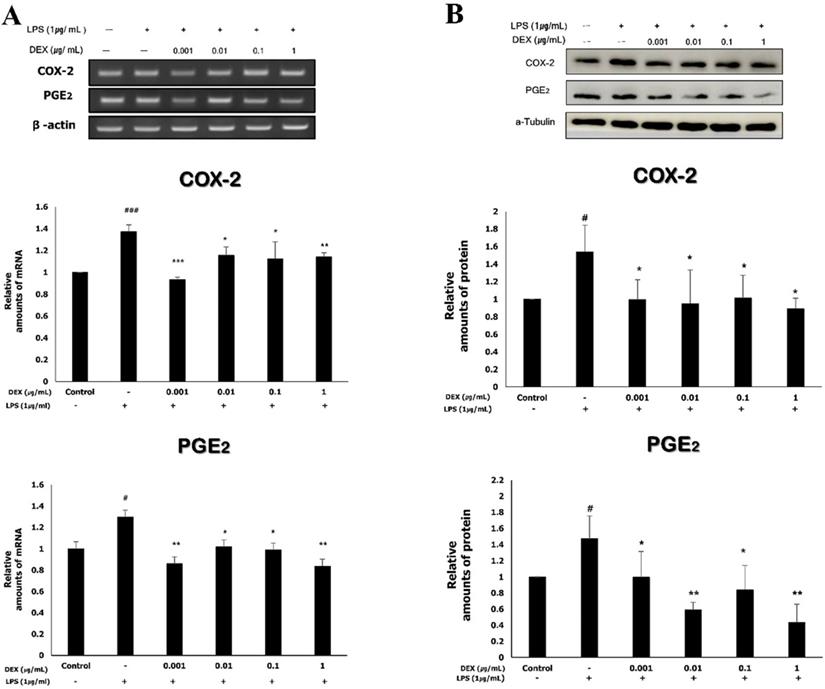 The present study demonstrated that pretreatment with dexmedetomidine attenuates the LPS-induced expression of COX-2, PGE2, and inflammatory cytokines in human amnion-derived WISH cells. To the best of our knowledge, this is the first study to investigate the effect of dexmedetomidine on the inflammatory response using WISH cells. The WISH epithelial cells are a good in vitro model to study the physiological functions of cells in the amnion. At the onset of labor, the levels of pro-inflammatory cytokines and chemokines increase in the epithelial cells of the amnion [24]. WISH cells are the ideal candidate for in vitro studies for investigating the factors that trigger labor and the modulation of PGE2 release by various agonists [25, 26]. 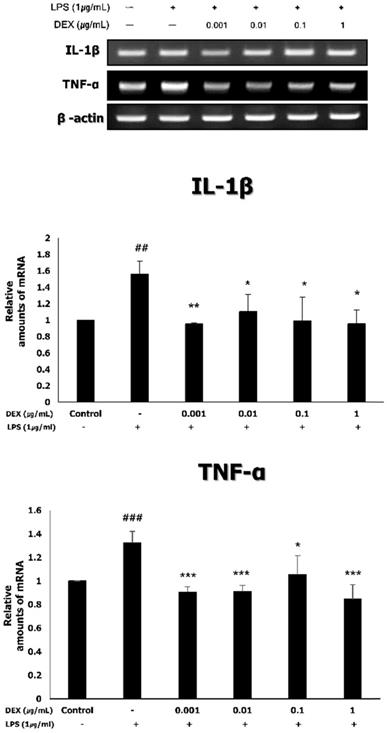 We treated WISH cells with LPS, a component of the cell wall of gram-negative bacteria, to induce the inflammatory response. LPS stimulates the innate immune response and is consequently recognized by LPS-binding protein (LBP) in the serum. The binding of LBP with LPS promotes the transfer to CD14 which separates the LPS and presents it to the TLR4 complex [32,33]. TLRs are a family of innate immune receptors that serve as major sensors of bacterial pathogens in murine and human placenta [34-36]. TLR4 is the primary receptor for transducing the LPS signal in human amniotic epithelial cells [37]. Following the recognition of LPS by TLR4 in the amnion, the downstream signaling cascade is activated and leads to the activation of MAPK and NF-κB, and the induction of pro-inflammatory cytokine gene expression [38,39].

The p38 MAPKs play a major role during inflammatory responses and are rapidly phosphorylated following LPS stimulation. The p38 pathway is a key regulator of the biosynthesis of pro-inflammatory cytokines including IL-1β and TNF-α [40,41]. p38α is the main isoform of p38 MAPKs and partially regulates the production of COX-2 [42]. NF-κB is a principal transcriptional factor involved in inflammatory responses and is translocated from the cytoplasm to the nucleus following activation. In the nucleus, the activated NF-κB binds to the promoter regions of COX-2, IL-1β, and TNF-α genes, and induces their expression [43,44]. It has been established that the expression of the COX-2 gene depends on NF-κB and in turn accelerates the production of PGs that induce cervical ripening and the onset of labor [45]. In our experiments, pretreatment with dexmedetomidine suppressed the LPS-induced expression of phospho-p38 and phospho-NF-κB mRNA. The LPS-induced expression of COX-2, PGE2, and inflammatory cytokines (IL-1β and TNF-α) was attenuated by pretreatment with dexmedetomidine. Therefore, the results of this study imply that pretreatment with dexmedetomidine restricts the LPS-induced expression of COX-2, PGE2, IL-1β, and TNF-α by suppressing the activation of p38 MAPK and NF-kB. 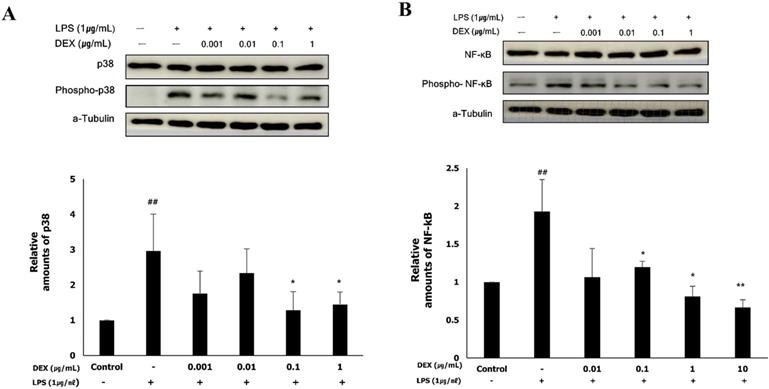 In this study, we used human amnion-derived WISH cells as a model for studying the effect of dexmedetomidine on the expression of inflammatory substances involved in preterm labor. In previous studies, various animal models and human-tissue models were used to examine the effect of inflammation on preterm labor. Despite significant differences in reproductive biology to humans, animal models such as nonhuman primates, sheep, and mice have been useful to study preterm labor [52-54]. Some studies used human amnion epithelial cells separated from the term placenta delivered by elective cesarean section to analyze the inflammatory effects of various agents on amnion [55,56].