Department of Neonatology, The Affiliated Huaian No.1 People's Hospital of Nanjing Medical University; the Pediatric Diagnosis and Treatment Respiratory Key Laboratory of Huai'an, Huai'an 223300, China.
#These authors contributed equally to this work as first authors.

Sex-specific differences in the severity of bronchopulmonary dysplasia (BPD) are due to different susceptibility to hyperoxic lung injury, but the mechanism is unclear. In this study, neonatal male and female mouse pups (C57BL/6J) were exposed to hyperoxia and lung tissues were excised on postnatal day 7 for histological analysis and tandem mass tags proteomic analysis. We found that the lung sections from the male mice following postnatal hyperoxia exposure had increased alveolar simplification, significant aberrant pulmonary vascularization and arrest in angiogenesis compared with females. Comparison of differentially expressed proteins revealed 377 proteins unique to female and 425 unique to male as well as 750 proteins in both male and female. Bioinformatics analysis suggested that several differentially expressed proteins could contribute to the differences in sex-specific susceptibility to hyperoxic lung injury. Our results may help identify sex-specific biomarkers and therapeutic targets of BPD.

Bronchopulmonary dysplasia (BPD) affects about 40% of neonates born before 28 weeks globally [1]. BPD is mainly caused by maternal eclampsia and ventilation and is characterized by alveolar and microvascular injury and pulmonary hypertension [2]. Despite improved perinatal care, the incidence of BPD is still high [3]. Therefore, better understanding of molecular mechanisms of BPD is important for the prevention and treatment of BPD.

Sexual dimorphism has been observed in such respiratory diseases as BPD, asthma, chronic obstructive pulmonary disease, pulmonary hypertension, lung cancer and pulmonary fibrosis [4-9]. The male has higher risk of BPD in premature neonates [10]. Variations among male and female premature newborns in the progression and outcome of BPD are intimately linked to physiological, hormonal and structural differences [11]. Moreover, increased expression of cytochrome p450 may contribute to improved outcomes in female mice [12]. A recent study showed that miR-30a was implicated in sexual dimorphism in BPD [13].

Proteomics is a promising approach for clinical and diagnostic applications by mapping proteomes from cells, tissues, and organisms for the discovery of new disease biomarkers [14]. Label-free liquid chromatography-mass spectrometry (LC-MS/MS) has been applied to reveal the pathogenesis of BPD [15]. Tandem mass tags (TMTs) have been applied in gel-free proteomic approach [16]. In this study, we employed TMTs approach to compare lung proteomic profiles of neonatal mice of different sex exposed to hyperoxia.

Thirty-two mouse pups (16 males and 16 females) within 6 h of birth were randomly assigned to two groups for the exposure to room air (21% O2) and hyperoxia (FiO2 ≥ 95%) for 7 days, respectively. Hyperoxia exposure was performed in Plexiglas chambers allowing continuous monitoring and constant oxygen content (95-100% oxygen). The details of the establishment of BPD model were described previously [17]. At the end, all mice were anesthetized by sodium pentobarbital, sacrificed and the lungs were excised.

The chest cavity was opened and the heart was inflated with phosphate buffered saline until the lungs turned white. The left and right upper lungs were kept at -80°C immediately. The rest of the lungs were fixed at 4°C with 4% paraformaldehyde and embedded in paraffin. The tissue was cut into sections (5 μm) and stained with haematoxylin-eosin. Radial alveolar counts (RAC) were evaluated as described previously [17]. Fifteen randomly chosen fields were observed with a 10× objective of a microscope in a blinded fashion.

Protein extraction and peptide digestion were performed as described previously [18]. Briefly, lung tissues were lysed in RIPA lysis buffer (Keygen Biotech), and the proteins in lysates were concentrated and digested with Trypsin Gold (Promega) for 16 h at 37°C. The digested peptides were desalted with C18 cartridge and dried by vacuum. The peptides were then labeled with TMT6/10plex™ Isobaric Label Reagent (Thermofisher) following the manufacturer's instructions. The labeled peptides were desalted using peptide desalting spin columns (ThermoFisher, 89852).

To confirm the differentially expressed proteins identified by LC-MS/MS, we focused on FABP4 (fatty-acid-binding protein 4) and CXCL4 (Chemokine C-X-C motif ligand 4). Lungs were homogenized in PBS (pH 7.4) and centrifuged at 10,000×g to remove insoluble debris. The levels of FABP4 and CXCL4 in lung tissues were detected by ELISA kit (Thermo Fisher Scientific, Shanghai, China) according to the manufacturer's instructions.

No animals in hyperoxia exposed group or control group died during the experiment. Newborn mouse pups were weighed on PND7, and mice showed significant weight loss (p < 0.01) after exposure to 95% O2 for 7 days compared to room air controls (Fig. 1A). However, body weights were not different for hyperoxia-male and female mice on PND7 (p > 0.05). Moreover, lung weight/body weight (LW/BW) ratio increased in both male and female neonatal pups with no difference (Fig. 1B). RAC was measured to assess postnatal alveolarization. On PND7, no significant difference was observed in RAC of male and female pups kept in room air, but RAC was significantly different in male mice and female mice exposed to hyperoxia (Fig. 1C). H&E staining showed typical alveolar simplification, decreased alveolar surface area and mild interstitial thickening after hyperoxia exposure, especially in male neonatal mice (Fig. 1D-G).

GO annotation of all the differentially expressed proteins. 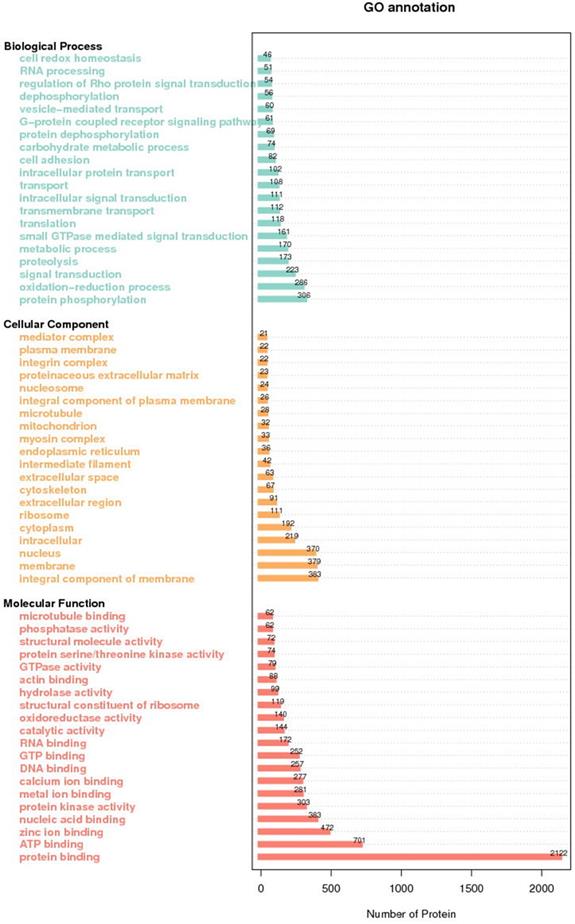 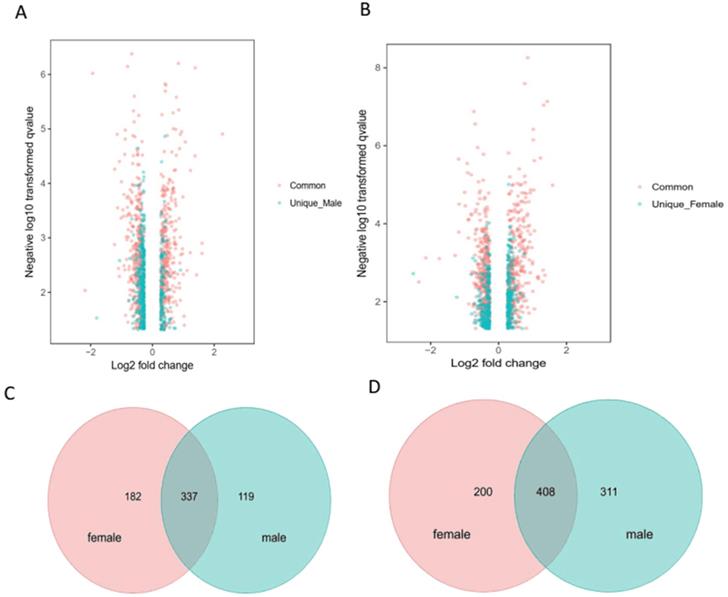 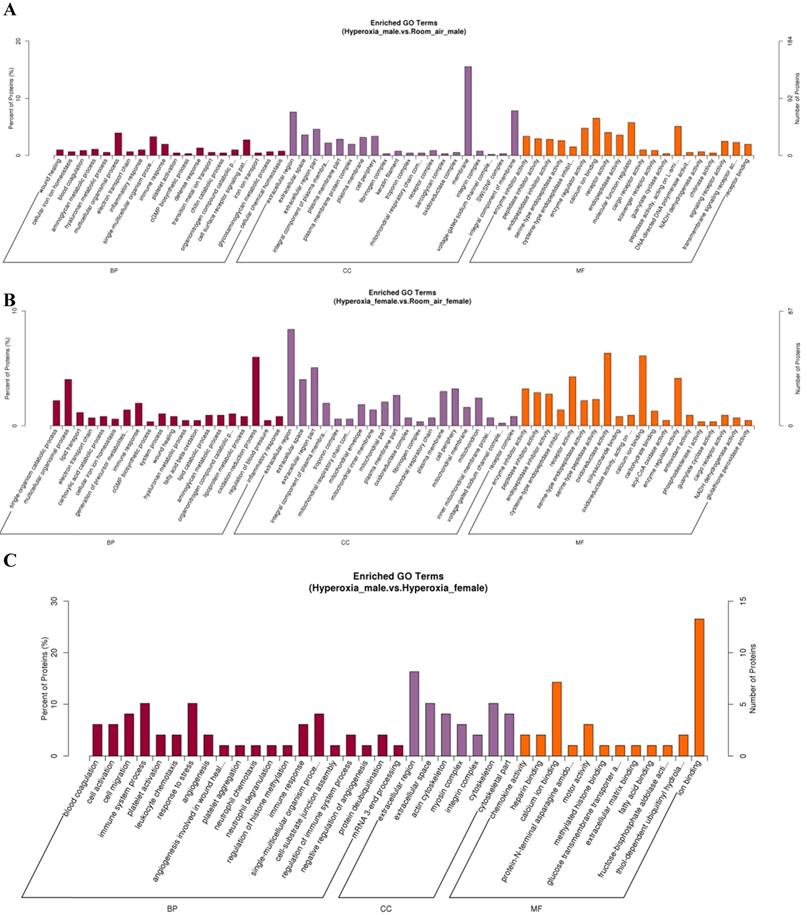 FABP4 is proposed as an adipokine produced in adipocytes, macrophages and endothelial cell, and is involved in the regulation of macrophages and airway inflammation [20]. FABP4 deficient mice were protected from atherosclerosis [21]. FABP4 participated in leucocyte infiltration into the airway [22]. Moreover, serum levels of FABP4 increased in many diseases including bronchopulmonary dysplasia [23]. Furthermore, serum FABP4 levels in female COPD patients increased significantly [24]. In our study, FABP4 was downregulated in male mice after hyperoxia exposure, which partially explains why neonatal male mice are more susceptible to hyperoxia-mediated lung injury. Chemokine C-X-C motif ligand 4 (CXCL4) is a pleiotropic chemokine involved in blood coagulation, angiogenesis, tumor and immune system regulation [25,26]. In our study, CXCL4 was exclusively upregulated in hyperoxia exposed neonatal male mice. CXCL4 regulates the differentiation of monocytes by inducing a specific macrophage phenotype termed “M4”. M4 macrophages are a subgroup of macrophages that express high levels of proinflammatory factors such as TNF-α and IL-6 [27]. IL-6 and TNF-α are known to be involved in sex specific hyperoxic lung injury [28]. 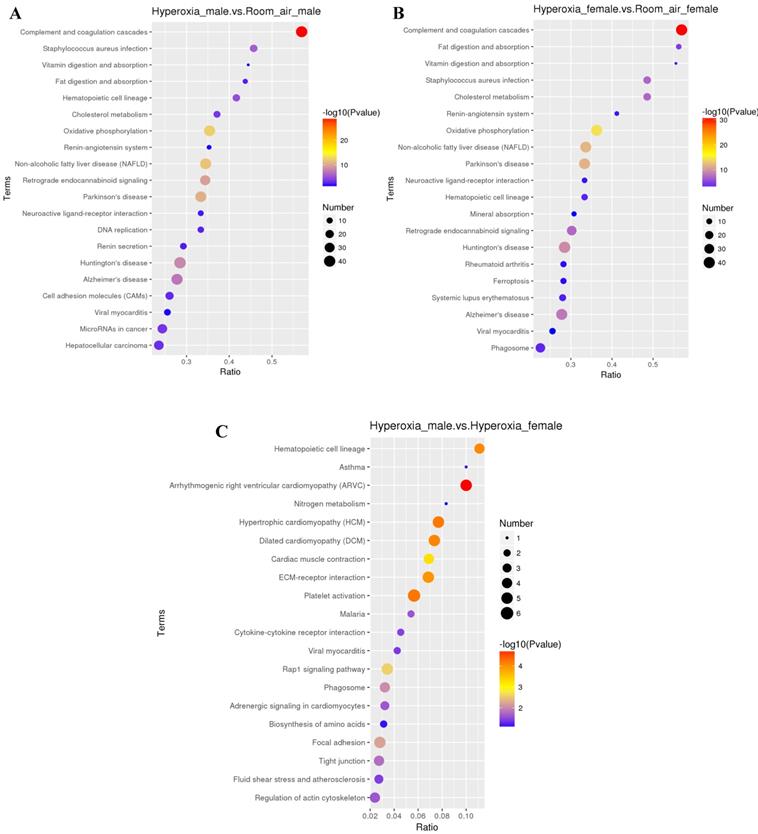 Pathway analysis showed sex specific differences in biological processes. Similar dysregulation in protein homeostasis and PI3K-Akt signaling pathway have been described in hyperoxic lung injury [29, 30]. Our findings are similar to the study performed in autopsy lung samples of preterm neonates on cell-cycle regulation, immune-cell regulation and sonic hedgehog signaling as differentially regulated in babies with BPD [31]. Notably, p53 pathway was upregulated in male mice while oxidative phosphorylation was downregulated in females. These data may represent ongoing apoptosis and oxidative stress in male mice, which may contribute to impaired lung development.

We also identified differentially expressed proteins common to both sexes. Calsequestrin-1 (CASQ1) is an acidic protein which binds Ca2+ with moderate affinity but high capacity [32,33]. We found that CASQ1 was downregulated in both male and female mice. Dainese et al. showed that the incidence of mortality in CASQ1-null mice during exposure to both halothane and heat was significantly greater in males than in females [34]. The difference in the susceptibility of CASQ1-null mice could reside in their different abilities to modulate oxidative stress [33]. The overproduction of reactive oxygen species could cause damages to lung epithelial cells [35].

Sex-specific differences in the severity of bronchopulmonary dysplasia were due to different susceptibility to hyperoxic lung injury, but the mechanism is unclear. To our knowledge, this is the first report on pulmonary proteomics in mice exposed to hyperoxia. Our results show sex specific modulation of protein expression and biological processes. Comprehensive analysis of proteomic profiling provides new insights into sex specific differences in the pathogenesis of hyperoxia induced lung injury.

This work was supported by grants from the National Natural Science Foundation of China (81801495) and the Pediatric Diagnosis and Treatment Respiratory Key Laboratory of Huai'an (HAP201607).