The effect of combined Epidural-general Anesthesia on Hemodynamic Instability during Pheochromocytoma and Paraganglioma Surgery: A multicenter retrospective cohort study

Objectives: The purpose of this study was to compare the effects of combined epidural-general anesthesia with those of general anesthesia alone on hemodynamic instability (intraoperative hypotension and hypertensive crisis) during pheochromocytoma and sympathetic paraganglioma surgery.

Conclusions: The combined epidural-general anesthesia was not effective in attenuating hypertensive responses, but could have exacerbated intraoperative hypotension. These findings should be taken into account before selecting the anesthetic technique in pheochromocytoma and sympathetic paraganglioma surgery.

Pheochromocytomas and sympathetic paragangliomas (PPGLs) are chromaffin cell tumors that produce, store, and secrete catecholamines [1]. The most common symptoms of these two tumors include hypertension, headache, palpitation, and diaphoresis, all of which are caused by catecholamine excess [2]. Although the incidence of these tumors is only 0.04-0.57 cases in 100,000 person-years [3], a diagnosis of PPGL is clinically significant. Without treatment, these tumors can lead to lethal complications, but with proper treatment, over 90% of cases are curable [4].

Surgical resection is the treatment of choice for PPGLs [4,5]. Recent advances in diagnostic tools, pharmacological management, and surgical and anesthetic techniques have dramatically improved the surgical outcomes of PPGLs [4,6]. However, surgical procedures for these catecholamine-secreting tumors are frequently accompanied by hemodynamic instability, which is divided into two sequential phases based on the ligation of the tumor: the hypertensive phase before tumor ligation and the hypotensive phase after tumor ligation [7]. The hypertensive crisis has been reported to occur in 51%-85% of PPGL surgeries [8-10]. This crisis is caused by excessive catecholamine release during endotracheal intubation, peritoneal insufflation with CO2, and tumor manipulation [11,12]. Conversely, intraoperative hypotension is known to occur in 44%-77% of PPGL surgeries [9,13]. The hypotensive event frequently occurs after tumor resection, and it is caused by intravascular volume depletion, abrupt withdrawal of catecholamine after tumor removal, and chronic downregulation of α and β adrenergic receptors [5,13,14]. Either symptom can lead to perioperative morbidity and mortality.

The combined epidural-general anesthesia technique (GE) has been widely used in PPGL resection. This technique has been reported to facilitate hemodynamic stability before tumor isolation and reduce pain and complications after surgery [6,15]. However, the sympathectomy-mediated cardiovascular depression associated with an epidural block may exacerbate the intraoperative hypotension and lead to hemodynamic collapse.

Selection of anesthetic agents and techniques was made entirely by the attending anesthesiologists. In patients who underwent GE techniques, the epidural catheter was inserted into the lower thoracic epidural space (T8-12) according to the surgical incision site prior to general anesthesia induction. To provide adequate analgesia during surgery, local anesthetics (0.2% ropivacaine or 0.2% chirocaine) and supplemental opioid (3 mg of morphine sulfate or 50 mcg of fentanyl) were epidurally administered, and intravenous remifentanil infusion was occasionally added. The administration of the epidural loading dose was completed within 30 minutes after anesthesia induction, and no epidural medication was administered during the main surgical procedure. In patients undergoing GA techniques, intravenous opioid administration (remifentanil infusion or fentanyl bolus) was used for analgesia during induction and maintenance of anesthesia.

Intraoperative hypotension and hypertensive crisis were defined before data collection and analysis. Intraoperative hypotension was defined as a mean intra-arterial blood pressure < 60 mmHg or a systolic intra-arterial blood pressure (SBP) reduction > 30% immediately before induction of anesthesia (SBPb) during the operation. Hypertensive crisis was defined by an SBP > 200 mmHg or an increase of > 30% in the SBPb during the operation.

Of the 119 patient records retrieved, 15 were excluded for the following reasons: duplication, three cases; patient age under 18 years, three cases; co-operative surgery, four cases; procedures without general anesthesia, one case; and missing values, four cases (Figure 1). Of the 104 patients included in the final sample, 53 (51.0%) underwent surgery with the GE technique, while the remaining 51 patients (49.0%) underwent surgery with the GA technique. The two groups were comparable in terms of preoperative patient demographics, tumor characteristics, and intraoperative variables. In addition, the two groups did not differ in terms of preoperative hemodynamic parameters (Table 1).

Preoperative patient demographics, tumor characteristics, and intraoperative variables in the groups stratified according to the presence of hypotension after PPGL resection are summarized in Table 2. Of all 104 patients included in this study, intraoperative hypotension occurred in 80 (76.9%) patients. There were significant differences in the baseline BP and anesthetic technique between the two groups.

Preoperative patient demographics, tumor characteristics, and intraoperative variables of the groups stratified according to the occurrence of hypertensive crisis during PPGL resection are summarized in Table 2; hypertensive crises occurred in 57 (54.8%) patients. There were significant differences in age, HU value on unenhanced CT, and tumor diameter between the two groups.

Study flow chart. Of the 119 patients' records retrieved, 15 were excluded for the following reasons: 3 due to duplication, 3 due to patients' age under 18 years old, 4 due to patients underwent co-operative surgery, 1 due to procedures without general anesthesia, and 4 due to missing values. Electronic medical record (EMR). 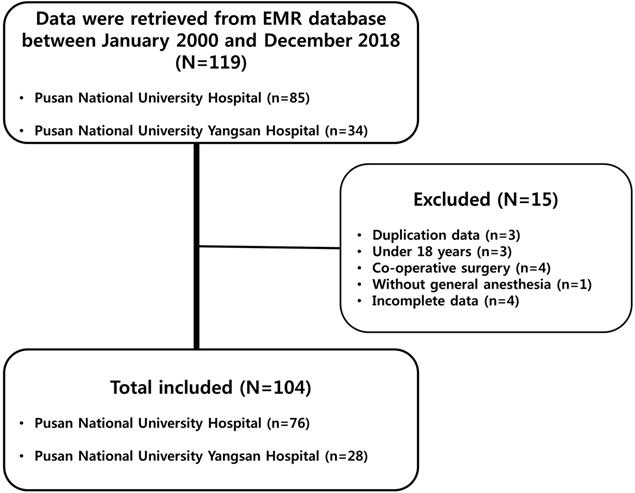 Patient demographics, tumor characteristics, and intraoperative variables according to the occurrence of intraoperative hypotension and hypertensive crisis

The known risk factors for hemodynamic instability during PPGL surgery are increased preoperative urinary catecholamine levels, larger tumor size, and absence of the α-blocker premedication [1,8,13,16]. Previous studies have demonstrated the usefulness of the HU value on unenhanced CT as a diagnostic tool for PPGLs [17]. However, to date, no studies have been conducted on the associations between intraoperative hemodynamic instability during PPGLs surgery and HU value on CT scans. In the present study, an increased HU value on unenhanced CT was found to be associated with the occurrence of both intraoperative hypotension and hypertensive crisis during surgical resection of PPGL. The underlying mechanism of this association is elucidative; however, several studies showed that the increased urinary MN or normetanephrine significantly associated with an increased CT attenuation in PPGLs [18,19].

In the present study, a high MBPb was found to be associated with the occurrence of intraoperative hypotension, but not with hypertensive crisis during surgery. Before the resection of PPGLs, blood pressure should be optimized whenever possible, since uncontrolled preoperative hypertension in PPGL patients is known to increase the risk of perioperative complications [20]. PPGLs can induce and exacerbate arterial stiffness, myocardial hypertrophy and fibrosis, and these cardiovascular remodeling have been reported to be associated with high blood pressure [21-24]. These hypertension-associated morphofunctional changes impair the ability of blood pressure regulation in stressful situations [25,26], which is thought to contribute to the development of intraoperative hypotension during PPGL resection. According to the current recommendations based on recent research, preoperative blood pressure control for PPGL patients is strict; blood pressure should be below 130/85 mmHg (MBP 100 mmHg) in the seated position, while SBP should exceed 90 mmHg in the standing position [5]. In the present study, the cut-off value of MBPb to predict intraoperative hypotension was 93.7 mmHg, which is consistent with the aforementioned recommendation.

In the present study, the GE technique was found to be associated with the occurrence of intraoperative hypotension during PPGL surgery. Epidural analgesia is frequently used in combination with general anesthesia in PPGL surgery for the attenuation of intraoperative hemodynamic response and postoperative pain control. Luo et al. [6] demonstrated that, as compared to the GA technique for PPGL resection, the GE technique has a vasodilator-sparing effect by reducing systemic vascular resistance before tumor removal. Furthermore, Li et al. [15] reported that although the GE technique failed to reduce the occurrence of intraoperative hemodynamic fluctuations, it effectively reduced postoperative complications in patients undergoing open surgery for pheochromocytoma. Our results suggest that the GE technique was not effective in preventing hypertensive crisis during PPGL surgery, but it may have exacerbated intraoperative hypotension. This may be due to the fact that the epidural block was not sufficient to inhibit the catecholamine surge during tumor manipulation but exaggerated the sympathectomy and vasodilatory effects after tumor ligation [2,5,27].

Tumor manipulation is the most powerful factor to induce a catecholamine surge during PPGL surgery [12,14,28]. Other risk factors previously found to be potentially associated with hypertensive crises include increased preoperative catecholamine level, larger tumor size, and absence of α-blocker premedication [1,5,8,16]. However, in the present study, these factors were not found to be associated with hypertensive crisis during PPGL surgery. This controversial outcome may be due to the most powerful factor, surgical manipulation of PPGL, masking the effects of other factors on hypertensive crisis. The surgeon's skill and competence levels are expected to have a significant impact on minimizing tumor manipulation; however, we could not evaluate the impact of this factor, which is a limitation of the present study.

The present study has several other limitations. First, the intraoperative hemodynamic data used in the present study were extracted from electronic anesthetic records. Since these measurements are recorded every 5 minutes, the accuracy of the hemodynamic parameters could have been compromised. Second, due to the low prevalence rate of PPGLs, the recruitment period was over 18 years, and the development of surgical and anesthetic skills may have produced a bias. Finally, due to the low frequency of complications, we could not analyze the correlation between intraoperative hemodynamic instability and the patient's clinical outcome.