The prognostic value of HGF-c-MET signaling pathway in Gastric Cancer: a study based on TCGA and GEO databases

Gastric cancer is a heterogeneous tumor that underlying molecular mechanisms are largely unclear. This study aimed to elucidate the expression level of HGF-c-MET in gastric cancer patients and to investigate the prognostic and diagnostic value of HGF-c-MET. In silico analysis of the TCGA and GEO database found that HGF and c-MET mRNA expression are significantly higher in gastric cancer tissues than those in peritumor tissues. Both higher mRNA expression of HGF and c-MET were associated with a poorer prognosis. c-MET expression was modulated by methylation in the promoter regions. HGF was positively correlated with CD8+ T cell, CD4+ T cell, macrophage, neutrophil and dendritic cell. Furthermore, functional enrichment analysis and protein-protein interaction networks further shown that HGF-c-MET and related proteins mainly participated in growth factor receptor binding, protein tyrosine kinase activity and signaling receptor binding. Finally, outcome of GSEA analysis showed 13 shared KEGG pathways enriched in high expressed group of HGF and c-MET.

The gene, which encoded hepatocyte growth factor (HGF, also known as scatter factor), was located on chromosome 7, and have been composed of 17 introns and 18 exons [11], HGF was a pleiotropic cytokine initially synthesized and secreted as an inactive precursor (pro-HGF), and then converted into an active 90 kDa heterodimer composed of an α chain and a β chain. The α chain, which existed in mature HGF, possessed an N-terminal hairpin loop and four kringle domains (K1-K4), while the β chain contained a serine protease-like domain [13]. HGF owned two c-MET binding sites, a high affinity site in the N-terminal and first kringle domains and a low-affinity site in the serine protease homology region [14]. The c-MET was encoded by the proto-oncogene MET and synthesized as a 170 kDa single chain precursor protein (pro-c-MET), which followed by processing to the mature form by post-translational modifications. The mature c-MET had an extracellular α-subunit and a single-pass transmembrane β-subunit, which formed a disulfide-linked heterodimer. The β-subunit not only formed an extracellular ligand-binding domain, but also formed part of the intracellular region, which is responsible for kinase activity and regulation of effector signaling. All of them guaranteed c-MET to serve as a receptor tyrosine kinase (RTK) [15].

The raw and processed data were acquired from The Cancer Genome Atlas (TCGA) in January 2016. The mRNA expression data and clinical information were downloaded and the following samples were excluded: (1) “0” gene expression values and (2) incomplete survival information and pathological characteristics. These processes were performed in R, using “RTCGA Toolbox” R packages, besides, the differential mRNA expression level of HGF and c-MET between gastric cancer tissues and normal tissues were obtained from the TCGA and GEO database (GSE27342) and were analyzed via the UALCAN web tool (http://ualcan.path.uab.edu/) [16].

The representative immunohistochemistry images of HGF and c-MET in gastric cancer tissues of the same patient (ID: 2196) were downloaded from the Human Protein Atlas (HPA) (http://www.proteinatlas.org/) [17].

Identifying the related factors interacted with HGF and MET

The STRING analysis tool was applied to identify the interacting factors using HGF and c-MET as the query and homo sapiens were chosen as organism (https://string-db.org/), furthermore, the relationship between HGF/MET and related factors were evaluated using spearman correlation analysis, finally, the seven related factors included HGF/MET were uploaded into Database for Annotation, Visualization, and Integrated Discovery (DAVID) web tool (https://david.ncifcrf.gov/home.jsp) [20], Go function enrichment analysis and Kyoto Encyclopedia of Genes and Genomes (KEGG) pathway enrichment were performed. P value <0.05 was set as the cutoff criteria.

Methylation status of HGF and MET

The mRNA expression and methylation status of promoter of HGF and MET were analyzed using the MethHC web tool (http://methhc.mbc.nctu.edu.tw/php/index.php) [21].

The relationship between HGF/MET and immunocytes

The Tumor Immune Estimation Resource (TIMER) web tool (https://cistrome.shinyapps.io/timer/) was used to investigate the correlation between HGF/MET and major immunocytes [22].

GSEA (http://software.broadinstitute.org/gsea/index.jsp) was utilized to explore biological function of HGF/MET genes [23]. Annotated gene sets c2.cp.kegg.v5.2.symbols.gmt was selected as the reference gene sets. The expression level of HGF/MET were chosen as a phenotype label. The false defection rate q value <0.05 and normalized enrichment score (NSE) >1 were selected to sort the pathways enriched in each phenotype.

We defined 1.09 and 4.22 as the cutoff value of HGF and MET for high and low expression according to the analysis of X-tile software based on their relationship with overall survival, respectively. Univariate Cox regression analysis was investigated to identify independent prognostic variables based on HGF level, MET level and other clinical characteristics, including age, gender, AJCC Stage, T classification and lymph node metastasis. P < 0.05 was considered as the cutoff p value to select the analyzed factors from the univariate analysis data to perform the multivariate model. A forward stepwise Cox regression model was chosen to select independent prognostic factors. The nomogram was constructed using the data of HGF, MET, Age, AJCC Stage and the package of rms in R version. The predictive accuracy of the nomogram was checked by concordance index (C-index) and assessed by calibration comparing nomogram-predicted with observed Kaplan-Meier estimates of survival probability, the C-index was positively related with the prognostic prediction. Differences between groups were compared by unpaired Student's t-test, Mann-Whitney u-test or one-way analysis of variance (ANOVA). Data were described as mean and standard error of the mean (SEM). All statistical analyses were executed using statistical programming language R for windows (cran.r-project.org). Two-tailed P-value less than 0.05 was set as statistically significance.

HGF and c-MET expression were up-regulated in gastric cancer

To analyze the protein expression of HGF and c-MET in gastric cancer, we searched The Human Protein Atlas (HPA) database and found that HGF and c-MET are highly expressed in the cytoplasm and plasma lemma of the gastric cancer cells belonged to the same patients (the images derived from the Human Protein Atlas (HPA) (http://www.protein atlas.org/)) (Figure 1A). Next step, the public cancer database (TCGA and GEO) were utilized to analyze the HGF and c-MET mRNA expression in peritumor and tumor tissues of gastric cancer patients, and the HGF and MET were both high-expressed in tumor tissues rather than those in peritumor ones (HGF: TCGA: P <0.01 and GSE27342: P <0.001; MET: TCGA: P <0.0001 and GSE27342: P <0.001; Figure 1B-E). Furthermore, gastric cancer samples with HGF and MET expression data across all patient characteristics were investigated from TCGA database, as shown in Figure 1F-K, the mRNA expression of HGF and MET were elevated obviously in highest AJCC stages, tumor grades and lymph node metastasis when compared with those in normal tissues (HGF: AJCC stage 4: P <0.001, tumor grade 3: P <0.0001, lymph node metastasis 3: P <0.0001; MET: AJCC stage 3: P <0.0001, tumor grade 3: P <0.0001, lymph node metastasis 3: P <0.05).

Gene alteration analysis of HGF and c-MET by cBioportal 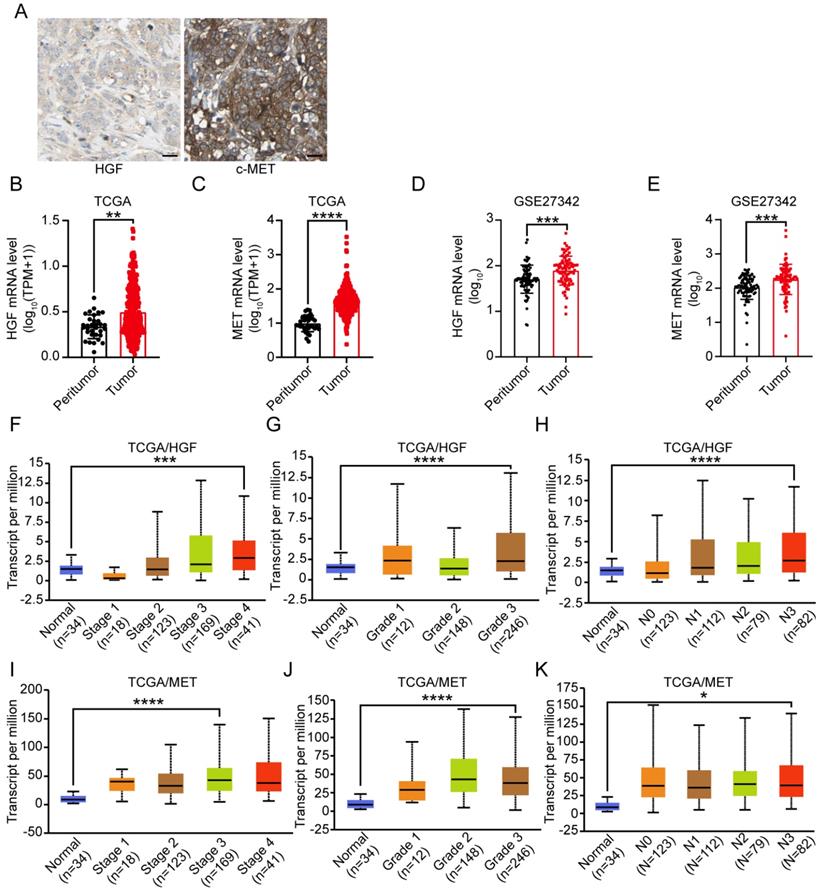 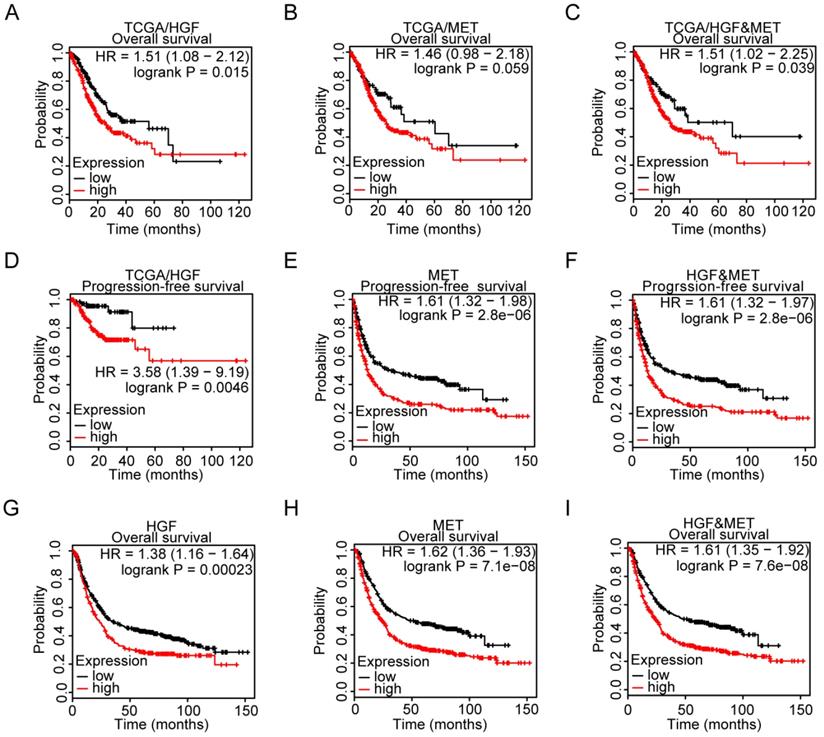 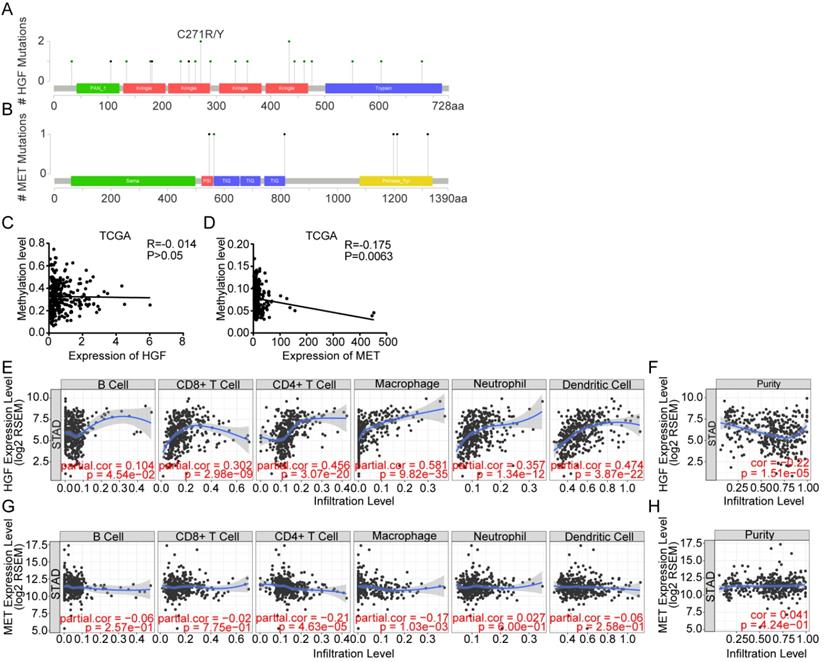 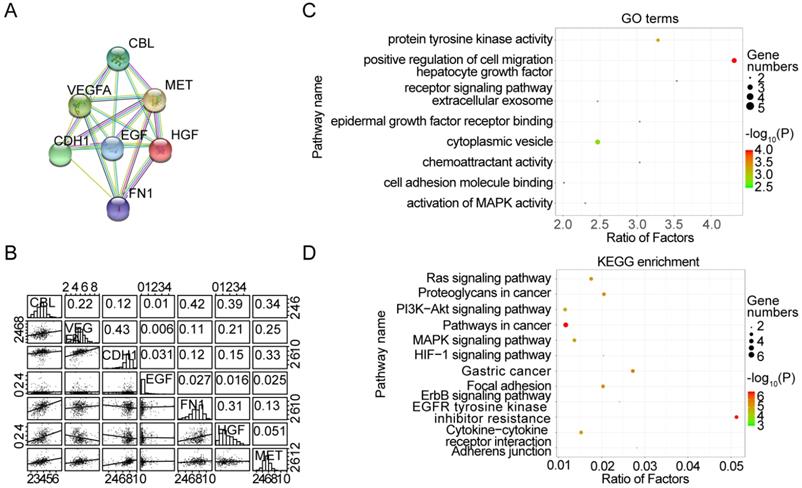 We further investigated the prognostic value of HGF and c-MET via using the TCGA database. The univariate analysis revealed that HGF and c-MET high mRNA expression correlated significantly with a poor overall survival (HGF: hazard ratio [HR]: 1.744; 95% confidence interval [CI]: 1.187-2.564; P =0.005; c-MET: hazard ratio [HR]: 2.020; 95% confidence interval [CI]: 1.089-3.746; P =0.026). Other clinical pathologic variable factors correlated with poor survival included advanced AJCC stage, advanced lymph node metastasis, higher T stage, and older age (Figure 5B), moreover, the results of multivariate analysis shown that HGF remain independently associated with overall survival, with a HR of 1.525 (95% CI: 1.024-2.272, P =0.038), along with c-MET, age, AJCC stage, T classification and lymph node metastasis (Figure 5C). To generate a more accurate predictive model, the independent prognostic risk factors in gastric cancer dataset based on TCGA database were utilized to establish a prognostic nomogram. The C-index for overall survival prediction of the formulated nomogram was 0.643 (95% CI: 0.591-0.695; P <0.0001), as shown in Figure 5D, the nomogram which constructed based on selected risk factors with hazard ratios could predict the probability of survival through adding up the scores identified on the points scale for every risk factor, and the total score projected to the bottom scale indicated the probability of 3- and 5- year survival. The calibration plot for the probability of 3- and 5- year survival fitted well between the prediction by nomogram and actual observation (Figure 5E & F). 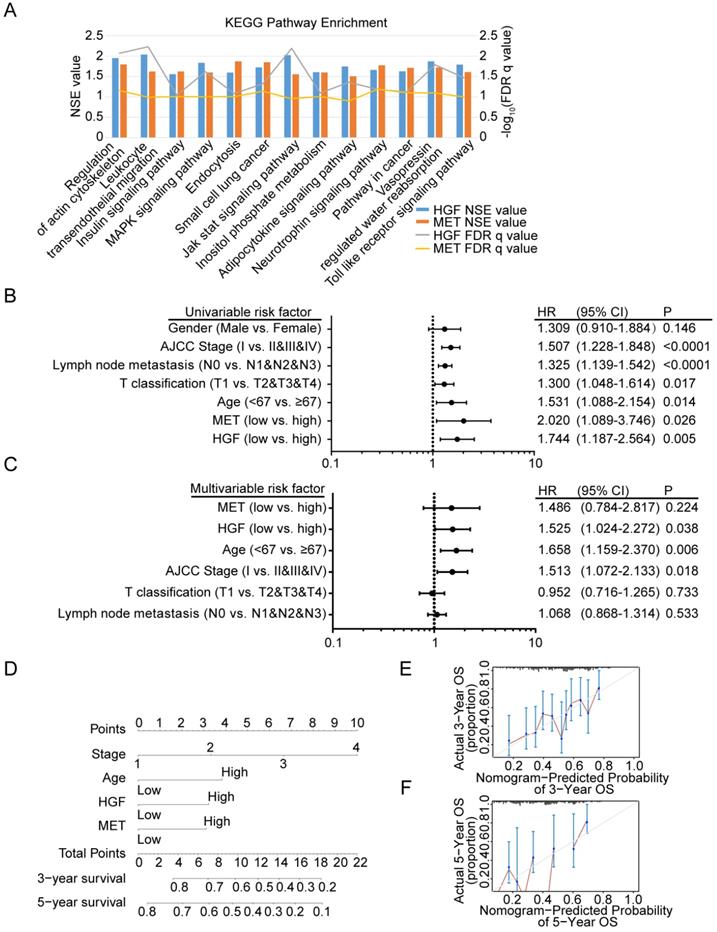 Our study focused on the integrative analyses of HGF and c-MET, and there was consistency between HGF and c-MET in terms of survival prediction, KEGG pathway enrichments and expression level in gastric cancer tissues and peritumor ones.

The correlation between infiltrated immune cells and HGF/c-MET in gastric cancer was analyzed, and results indicated that HGF are positively correlated with CD8+ T cell, CD4+ T cell, macrophage, neutrophil and dendritic cells, which mean that HGF might serve as an immune-positive stimulus via promoting the recruitment of dendritic cells, T lymphocytes, macrophage and neutrophil. Studies found that HGF itself could control the migration of T lymphocytes, induce the expansion of all blood cell type precursors, counteract the anti-inflammatory function of TGF-β, and have a defensive role against inflammation and fibrosis [26]. While the c-MET itself could be seen as a tumor-associated antigen (TAA) by CD8 cytotoxic T cells and this function activated immune system against cancer cells that c-MET high expressed [27]. Considering the function of HGF-c-MET in angiogenesis formation, and the fact that pro-angiogenetic signals were immunosuppressive, many scholars hypothesized there is a direct link between HGF-c-MET induced angiogenesis, its signals, and the immune suppression of the tumor microenvironment in HGF-c-MET positive tumors [26].

Overexpression of HGF mRNA and/or protein, MET mRNA and c-MET protein have been recorded in 20-30%, and 40-70% samples of gastric cancer patients, respectively [14, 28], which were higher than the proportion of gastric cancer dataset based on TCGA database. Among the Chinese gastric cancer patients, 6% of c-MET genes were amplified and 13% of proteins were overexpressed [15]. The c-MET inhibitor, such as Su11274, monotherapy or combined with irinotecan have achieved positive outcomes, other c-MET inhibitor, such as KRC-408, KRC-00715, Simm 530 and multitargeted kinase inhibitor T-1840383 effectively suppressed the proliferation of gastric cancer cells and growth of tumor xenograft [15], besides, a multinational phase 2 study shown the monoclonal antibody which binds the MET-ligand HGF (Rilotumumab) combined with epirubicin, cisplatin, and capecitabine (ECX) could make benefit for MET-positive advanced oesophagogastric cancer patients [29]. Thus, the HGF-c-MET signaling pathway is an emerging and very interesting druggable target in gastric cancer, and the gate of molecularly stratified drug development in gastric cancer have opened, the development of medicine and technology might provide new opportunity for the precision treatment of gastric cancer.

28. Zhao J, Zhang X, Xin Y. Up-regulated expression of Ezrin and c-Met proteins are related to the metastasis and prognosis of gastric carcinomas. Histology and histopathology. 2011;26:1111-20