Background/Aim: Pancreatic adenocarcinoma is a highly malignant tumor. Synergistic combinations of anticancer agents for the effective treatment of pancreatic cancer patients are urgently needed. Here, we investigated the combined effect of celecoxib (CEL) and salirasib (SAL) on pancreatic cancer cells.

Methods: Cell viability and apoptosis were measured by the trypan blue assay, three-dimensional cultures, propidium iodide staining, and caspase-3 assay. NF-κB activation and the protein levels of Akt, pAkt, and Bcl-2 were determined by the luciferase reporter assay and western blot.

Results: Co-treatment with CEL and SAL had stronger effects on decreasing cell viability and inducing apoptosis in Panc-1 cells as compared with each agent individually. This combination strongly inhibited NF-κB activity and reduced pAkt and Bcl-2 levels in Panc-1 cells.

Conclusion: SAL in combination with CEL may represent a new approach for effective inhibition of pancreatic cancer.

Pancreatic adenocarcinoma is a highly aggressive cancer that was estimated to cause more than 45000 deaths in the United States in 2019 [1]. Pancreatic cancer arises from the morphologically and genetically distinct defined precursor lesions through a step-wise accumulation of genetic alterations. In the majority of the patients diagnosed with pancreatic cancer, symptoms do not develop until they are either unresectable or metastatic, rendering it difficult to cure [2, 3]. Despite all advances in cancer treatment, it is still the fourth most frequent tumor-related cause of death in the Western world [1, 2]. The 5-year survival rate for pancreatic cancer is less than 5%, and conventional treatment approaches, such as surgery, radiation, chemotherapy, or combinations thereof, have had little impact on the course of this aggressive neoplasm. A median survival of <6 months has remained unchanged for the last three decades [3, 4, 5]. Almost all patients with pancreatic cancer develop metastases resulting in death because of the debilitating metabolic effects of its unrestrained growth. The low survival rate of patients indicates an increased need for novel anticancer agents and effective combination therapies for the treatment of pancreatic cancer.

Ras is a family of genes involved in regulating cell proliferation, differentiation, adhesion and apoptosis. It has been reported that KRAS mutations occur in more than 90% of pancreatic cancers [6]. This mutation results in constitutive activation of the protein, which no longer requires a ligand for activation [7]. S-trans, trans-farnesylthiosalicylic acid (FTS; also known as Salirasib [SAL]; Fig. 1), a synthetic Ras inhibitor, SAL acts as a functional Ras antagonist in cells that affects Ras-membrane interactions by dislodging the protein from its anchorage domains, which facilitates its degradation and thus reduces the cellular active Ras content [8, 9]. SAL has been shown to inhibit the growth of H-Ras-, K-Ras-, and N-Ras-transformed rodent fibroblasts in vitro and inhibit the anchorage-independent growth of several cancer cell lines [10, 11, 12, 13].

Structures of SAL and CEL.

The number of viable cells after each treatment was determined using a hemocytometer under a light microscope (Nikon Optiphot, Tokyo, Japan). Cell viability was determined by the trypan blue exclusion assay, which was performed by mixing 80 µL of cell suspension with 20 µL of 0.04 g/mL trypan blue solution for 2 min. Blue cells were counted as dead cells, whereas undyed cells were counted as live cells.

Assessment of apoptotic cells by morphology and activation of caspase-3

Panc-1 cells were mixed with Matrigel (Collaborative Research, Bedford, MA, USA) on ice at a density of 0.5 × 105 cells/mL. Matrigel containing Panc-1 cells was placed in a 12-well plate (1 mL/well) and incubated at 37 °C for 2 h to allow the Matrigel to solidify. Subsequently, DMEM was added to each well on top of the gel. The cells were incubated for 24 h and then treated with CEL or SAL alone or in combination once every other day. On day 10, the 3D cultures were examined under a microscope (Nikon Optiphot, Tokyo, Japan) for the formation of tissue-like structures.

Analysis of synergy was performed using CompuSyn software. The combination index (CI)-fraction affected (CI-Fa) curve demonstrates the relationship between the CI value and the effective level of a certain biological indicator. If CI < 1, then the compounds are thought to have synergistic effects. If CI > 1 or = 1, then the compounds are thought to be antagonistic or additive, respectively. Analysis of variance (ANOVA) with the Tukey-Kramer test was used to compare results among different experimental groups. 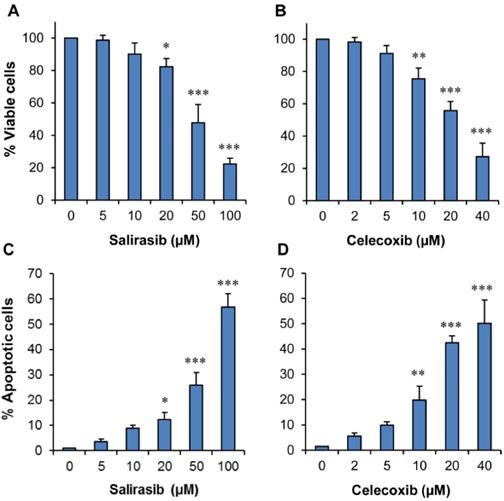 The effects of SAL or CEL on pancreatic cancer cell viability and apoptosis were examined using pancreatic cancer Panc-1 cells. In these experiments, Panc-1 cells were treated with SAL or CEL for 72 h, and the viable cell number following treatment was determined by the trypan blue exclusion assay. As shown in Figure 2A&B, treatment of the cells with SAL (5-100 µM) or CEL (2-40 µM) resulted in a concentration-dependent decrease in the number of viable cells. Moreover, SAL or CEL dose-dependently induced apoptosis in Panc-1 cells (Figure 2C&D).

Combinations of SAL and CEL at different ratios were found to more potently inhibit Panc-1 cell viability than either agent individually (Figure 3A). Statistical analysis based on an isobologram showed that SAL and CEL in combination synergistically decreased the viability of Panc-1 cells (Figure 3B). The CI for the combination of SAL and CEL at 5 µM + 2 µM, respectively, was calculated as 0.64, that at 10 µM + 5 µM was 0.59, and that at 20 µM + 10 µM was 0.71, indicating a synergistic effect between SAL and CEL.

Effects of combinations of SAL and CEL at different ratios on Panc-1 cell growth. Panc-1 cells were seeded in cell culture dishes with DMEM, incubated for 24 h, and then treated with SAL (5, 10, and 20 µM) and CEL (2, 5, and 10 µM) alone or in combination for 72 h. The viable cell number was determined by the trypan blue exclusion assay. Statistical analysis for synergy was performed using CompuSyn software. (A) Number of viable cells. (B) left, dose-fraction affected (Dose-Fa); right, combination index-fraction affected (CI-Fa). Data are expressed as the mean ± SD from three separate experiments. 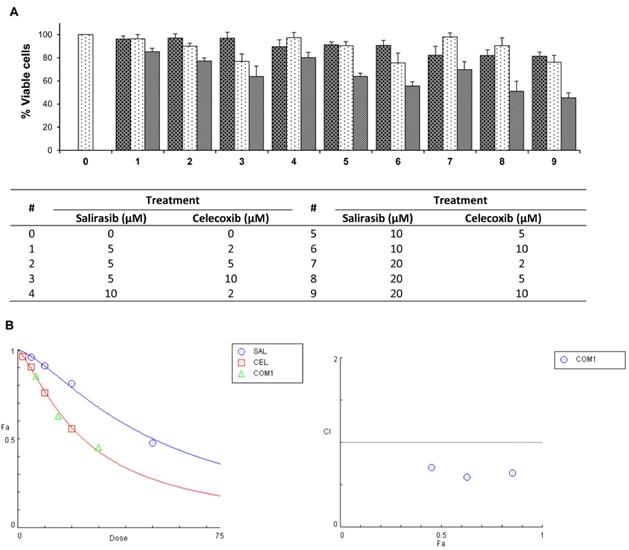 Effect of SAL and/or CEL on Panc-1 cells in 3D cultures. Panc-1 cells were seeded in Matrigel in a 12-well plate (1 mL/well) and treated with SAL and/or CEL once every other day for 10 days. Representative micrographs of Panc-1 3D cell cultures of control cells (A), SAL-treated (B), CEL-treated (C), and combination-treated (D) groups are shown. Data are expressed as the mean ± SD from three separate experiments. aP<0.001 vs. treatment with SAL or CEL alone. 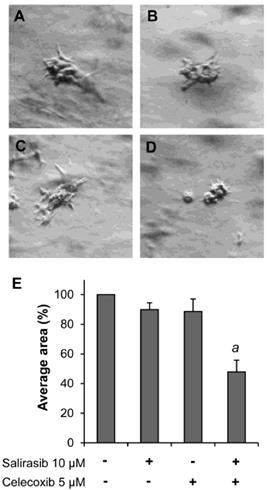 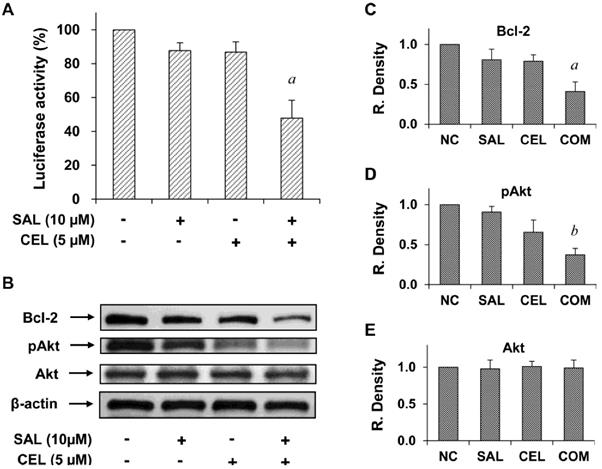 In the present study, we demonstrated that SAL in combination with CEL synergistically decreased the viability of pancreatic cancer Panc-1 cells. This drug combination was found to have more potent effect on inducing apoptosis in Panc-1 cells than either drug used individually. To the best of our knowledge, this is the first study indicating strong combined effects of SAL and CEL on viability and apoptosis in human pancreatic cancer cells.

The inhibitory effect of SAL and CEL alone or in combination on Panc-1 cells in 3D cultures was investigated in the present study. Compared to conventional 2D monolayer cell cultures, the 3D culture system mimics the structural architecture and differentiation ability of the tumor tissues. It is well known that cell-cell and cell-matrix interactions within the 3D microenvironment are important for the physiological function and response of cancer cells to anticancer agents [21, 22]. In the present study, we found that Panc-1 cells formed 3D tissue-like morphology in Matrigel which contained an extra cellular matrix. Treatment of Panc-1 cells with SAL and CEL in combination had a stronger inhibitory effect than either drug alone on the formation of tissue-like morphology in 3D cultures.

Ras signaling is a major junction of various signaling pathways. For this reason, Ras and its effectors serve as important targets for therapeutic intervention in pancreatic cancer [23]. SAL is a synthetic Ras inhibitor that affects Ras-membrane interactions and has been shown to effectively inhibit the growth of human cancer cells [10, 11, 12, 13]. In the present study, we found that SAL dose-dependently decreased the viability and stimulated apoptosis of pancreatic cancer Panc-1 cells as well as inhibited the formation and growth of tumor tissue-like structures in 3D cell cultures. It was previously shown that KRAS activates NF-κB, which is crucial for cell survival and tumorigenesis [24, 25]. Here, we found that SAL inhibited NF-κB, as determined by the luciferase reporter assay. Moreover, SAL decreased the level of NF-κB downstream of the anti-apoptotic protein Bcl-2. SAL in combination with CEL had a more potent effect on inhibiting NF-κB activity and decreasing the Bcl-2 level than either drug used individually. These results indicated that inhibition of the NF-κB signaling pathway may play a role in the inhibitory effect of SAL and CEL in pancreatic cancer cells.

CEL, a selective COX-2 inhibitor, has been shown previously to inhibit the growth of human pancreatic cancer cell lines [26, 27]. A previous study demonstrated that CEL inhibited angiogenesis, tumor growth, and metastasis in pancreatic xenograft tumors [28]. In a study using a COX-2-overexpressing mouse model, CEL was shown to inhibit pancreatic cancer formation [29]. Here, we found that CEL dose-dependently decreased viability and stimulated apoptosis in Panc-1 cells as well as inhibited NF-κB activation and decreased the level of NF-κB downstream of the anti-apoptotic protein Bcl-2. The NF-κB signaling pathway has been shown to play an important role in pancreatic cancer development, metastasis, and chemoresistance [30, 31, 32]; furthermore, this pathway is considered as a novel target in pancreatic cancer [33]. Our results demonstrated that CEL in combination with SAL potently inhibited NF-κB activity. The mechanisms for the regulation of NF-κB activity by the combination of SAL and CEL are not clear. KRAS has been shown to activate NF-κB [24, 34]. SAL is a RAS inhibitor and the inhibitory effect of SAL on NF-κB activation found in the present study may be mediated by inhibition of RAS activity. The COX-2 enzyme catalyzes the production of prostaglandin (PGE2) which can activate NF-κB [27]. CEL inhibits COX-2 and decreases the production of PGE2 leading to suppression of NF-κB activation. SAL and CEL target different pathways involved in the regulation of NF-κB and the combination of these two drugs resulted in potent suppression of NF-κB. Our studies suggest that simultaneous inhibition of the RAS pathway and the COX-2/PGE2 axis may represent an effective strategy for suppression of NF-κB activity. The effective inhibition of NF-κB pathway by the combination of SAL and CEL was further confirmed by a strong decrease in the level of Bcl-2 which is an anti-apoptotic protein and a downstream target of NF-κB. In addition, our study revealed that pAkt levels were decreased by CEL and strongly decreased by co-treatment with CEL and SAL. It has been well documented that PTEN/Akt signaling is one of the major players in cancer biology and affects a wide range of cancer cell behaviors, including cell viability, senescence, proliferation, migration, and invasion, by regulating the activities of various transcription factors and signaling molecules [35]. Suitable combinations that target multiple signaling pathways may increase the effectiveness of anticancer agents in pancreatic cancer. SAL and CEL strongly inhibited NF-κB and Akt in pancreatic cancer cells. Therefore, the combination of these two drugs may be an effective approach for inhibiting pancreatic cancer.

35. Garrett JT, Chakrabarty A, Arteaga CL. Will PI3K pathway inhibitors be effective as single agents in patients with cancer?. Oncotarget. 2011;2:1314-21