Long non-coding RNA GAS5 expression in patients with Down syndrome

Trisomy 21, also known as Down Syndrome (DS), is the most common chromosome abnormality and causes intellectual disability. Long non-coding RNA (lncRNA) growth arrest-specific 5 (GAS5), whose differential expression has recently been reported in patients with Klinefelter syndrome, has been addressed to play a role in the development of inflammatory and autoimmune diseases, vascular endothelial cells apoptosis and atherosclerosis, all being common features in patients with DS. Therefore, the aim of this study was to assess the lncRNA GAS5 expression profile in DS patients and in controls. lncRNA GAS5 levels were evaluated by qRT-PCR assay in 23 patients with DS and 23 age-matched controls. A significant lncRNA GAS5 down-regulation was observed in patients with DS by RT-PCR analysis, The RNA sequencing experiments confirmed the qRT-PCR data. LncRNA GAS5 down-expression may play a role in the development of some typical features of the patients with DS and, particularly, in inflammatory and autoimmune diseases.

Down Syndrome (DS), caused by a trisomy of chromosome 21, is a common genetic disorder (1:600-700 newborns). The simple trisomy is due to an abnormal chromosome separation at the first or second meiotic division leading to a doubled chromosome 21 in the reproductive cells (in the oocytes for the 95% of cases). The transfer of a chromosome fragment to another (usually between chromosomes 14 and 21, 21 and 22) results in translocation trisomy and occurs in about 5-6% of patients with DS [1]. The trisomy leads to a developmental disorder causing intellectual disability, early onset of Alzheimer's disease, cardiovascular defects, nutritional diseases (overweight, obesity, hypercholesterolemia and deficiencies of vitamins and minerals)[2], dysfunction of the muscle-skeletal and gastrointestinal systems, abnormal immune function, endocrine disruption of the hypothalamic-pituitary-thyroid axis, and the appearance of various phenotypic features such as upslanted palpebral fissures, flat nose and short stature[3] . The expression of chromosome 21 genes is dynamic and complex [4]. Furthermore, genes mapping on the other chromosomes have been suggested to play a role in DS phenotype [5]. The molecular mechanisms underlying the variability in DS phenotype have not been clearly understood yet. Growth arrest-specific 5 (GAS5) gene, mapping on 1q25.1 chromosomal band, encodes for a long non-coding RNA (lncRNA) that is involved in the modulation of gene expression targeting many different downstream miRNAs. lncRNA GAS5 was initially identified as a tumor suppressor gene [6]. Recently, it has been shown to be over expressed in patients with Klinefelter syndrome[7]. Furthermore, recent evidence suggests that lncRNA GAS5 plays a role in autoimmune disorders [8], widely recognized as important DS comorbidities. To the best of our knowledge, no study evaluated the lncRNA GAS5 expression profile in patients with DS. Therefore, the aim of this study was to assess lncRNA GAS5 expression in fibroblasts from DS subjects, compared to those of fibroblasts from Normal Controls (NC) subjects by qRT-PCR. Furthermore, preliminary data on a study of the transcriptome in peripheral blood mononuclear cells (PBMCs) of subjects with DS have been included.

Samples for qRT-PCR and RNA sequencing

Table with data on patients and controls involved in qRT-PCR experiments.

Table with data on patients and controls involved in RNA sequencing experiments. 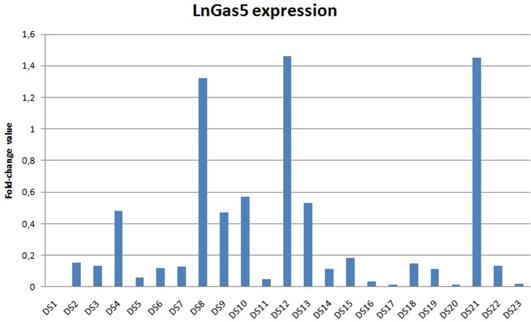 RNA-Sequencing was performed by Genomix4Life srl (Baronissi (SA), Italy). RNA concentration in each sample was assayed with a ND-1000 spectrophotometer (NanoDrop) and its quality assessed with the TapeStation 4200 (Agilent Technologies). Indexed libraries were prepared from 1 µg/ea purified RNA with TruSeq Stranded Total RNA (Illumina) Library Prep Kit according to the manufacturer's instructions. Libraries were quantified using the Agilent 2100 Bioanalyzer (Agilent Technologies) and pooled such that each index-tagged sample was present in equimolar amounts, with final concentration of the pooled samples of 2 nM. The pooled samples were subject to cluster generation and sequencing using an Illumina NextSeq 500 System (Illumina) in a 2x75 paired-end format. The raw sequence files generated (.fastq files) underwent quality control analysis using FastQC (https://www.bioinformatics.babraham.ac.uk/projects/fastqc/). Bioinformatics analysis were performed by Genomix4Life Srl (Baronissi, SA, Italy). The quality checked reads were trimmed with cutadapt v.1.10 and then aligned to the human genome (hg38 assembly) using STAR v.2.5.2 [10], with standard parameters. Differentially expressed mRNAs were identified using DESeq2 v.1.12 [11]. The sequencing data are available upon request. As partial data of a larger research project not yet completed.

We found a decreased lncRNA GAS5 levels in 22 out of 23 patients with DS; 15 DS showed values lower than 10% compared to the relative control (Figure 1). The distribution of the expression values was found to be not normal (p<0.01) and inferential statistical analysis revealed a significant difference between the two groups: DS vs. controls (p<0.001). No significant statistical difference was found in two groups according to gender and age (p>0.05). RNA sequencing (RNA-Seq) data obtained from 6 DS patients and 5 NC showed how lncRNA GAS5 is down-regulated in the patients with DS respect to the controls (Figure 2).

LncRNA GAS5 has been reported to play a role in inflammatory and autoimmune disorders, apoptosis and glucocorticoid (GC) actions [8,12]. In fact, one of the mechanisms by which lncRNA GAS5 could be involved in the development of autoimmune disorders may be its influence on the glucocorticoid receptor (GCR) function. Accordingly, this non coding RNA is capable of direct interaction with the DNA binding domain of the GCR [13]. Altered lncRNA GAS5 expression in patients with rheumatoid arthritis, systemic lupus erythematosus, osteoarthritis and inflammatory bowel disease has been described, both up-regulation and down-regulation mechanisms have been highlighted, these mechanisms directly affect the GCR that are involved in this type of pathology [8]. All this is consistent with the possible involvement of lncRNA GAS5 in the pathogenesis of inflammatory and autoimmune diseases, more frequently occurring in patients with DS.

Patients with DS are at risk of metabolic disorders and endothelial dysfunction [14]. LncRNA GAS5 over-expression triggers vascular endothelial cells apoptosis after lipoperoxidation. Both human and animal models show higher levels of lncRNA GAS5 in plaques of atherosclerosis compared to healthy vessels. Therefore, its expression may likely be involved in atherogenesis and may represent an interesting target for the treatment of atherosclerosis [15]. Other important experimental data is that LncRNA GAS5 expression seems to be involved in vasculopathy-related processes, thus representing a target for atherosclerosis-related treatments [16]. The role of lncRNA GAS5 in atherogenesis in DS patients deserves elucidation but we cannot exclude that lncRNA GAS5 dysregulation may play a role, furthermore it could also be assumed that the same mechanism may affect early dementia in DS patients. Finally, ovarian reserve is reduced in patients with DS [14]. LncRNA GAS5 seems to be involved the induction of cell apoptosis [12,17] and, therefore, might trigger ovarian cell apoptosis. The possible role of lncRNA GAS5 over-expression in the pathogenesis of reduced ovarian reserve in patients with DS may need to be further explored.

Various studies have shown that lncRNA GAS5 also plays a role in the brain, in fact lncRNA GAS5 can effectively inhibit the proliferation, migration and invasion of glioma cells and promote cell apoptosis through targeting GSTM3 expression [18]. Moreover a study highlights that silencing GAS5 may inhibit neuronal apoptosis and improve neurological function in ischemic stroke, which contributes to better understanding of the pathologies of ischemic stroke and development of novel therapeutic options for this disease [19]. If lncRNA GAS5 was down-expressed in the brain of DS subjects during embryonic development, it could influence normal brain development, for example by acting on the apoptotic mechanisms that are necessary for the same embryonic development. 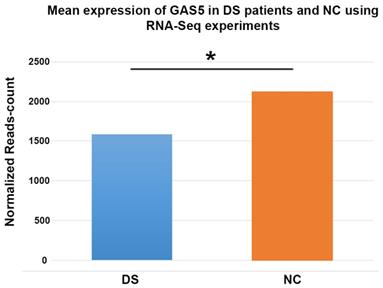 This study was supported by a fund from the Italian Ministry of Health “Ricerca Corrente” (RC n. 2751604).