Guava extracts purified from leaf and bark have many bio-active molecules with anti-cancer activities. In addition, lycopene-rich extracts obtained from red guava fruit can induce apoptosis in estrogen receptor-positive breast cancers. Triple-negative breast cancer (TNBC) lacks estrogen receptors, progesterone receptors and human epidermal growth factor receptor 2 (HER2) and, therefore, hormone therapy and targeted therapy are not used in the clinic. The purpose of this study was to determine whether red guava fruit extracts can affect the proliferation of TNBC cells. In this study, cell viability was determined by using the MTT assay. Apoptosis and necrosis were analyzed using flow cytometry. Cleaved caspase-3 and PARP were analyzed by western blotting. We found that red guava extracts can, through caspase-3 activation and PARP cleavage signaling, induce apoptotic and necrotic death in TNBC cells. Our results thus show the therapeutic benefit of red guava extracts as a potential cancer treatment for TNBC in combination with doxorubicin or targeted therapy.

Breast cancer is the second major cause of death among cancers that are generally diagnosed in women [9,10]. Breast cancer commonly has invasive characteristics and a high rate of metastasis, which result in high morbidity and mortality [11,12]. Currently, chemotherapy, hormone therapy and targeted therapy are the most common breast cancer treatments [13,14]. About 15-20% of breast cancer occurrences are triple-negative breast cancer (TNBC) [15]. TNBC lacks estrogen receptors (ERs), progesterone receptors (PRs) and epidermal growth factor receptor 2 (HER2), and, therefore, chemotherapy, hormone therapy and targeted therapy are not useful for TNBC treatment [16-18]. Thus the development of a method for treating TNBC is important.

Some studies have suggested that guava extracts, most of which were purified from guava leaves or guava bark, are potential materials for breast cancer treatment [5,19,20]. Guava extracts are suggested to have estrogen-like activity, and, therefore, guava extracts are useful for treating ER-positive breast cancer cells, such as MCF-7 cells [19]. Although aqueous extracts of guava fruit may not display effective anti-cancer activity [21], lycopene-rich extracts from red guava fruit can induce apoptosis-like cell death among ER-positive breast cancer cells [22]. Thus different guava species have different bioactive components that result in different activities. However, whether lycopene or other bioactive molecules from red guava fruit have anti-cancer activities on TNBC cells remains to be studied.

Doxorubicin, a DNA topoisomerase II inhibitor, has been used as a chemical therapy for cancers, including breast cancer [23,24]. However, doxorubicin is not effective for TNBC treatment. Other agents may be used to enhance doxorubicin-induced anti-cancer activity on TNBC [25]. Tarceva (Erlotinib) and Iressa (Gefitinib), both of which are EGFR inhibitors, are used as targeted therapy for breast and other cancers [26,27]. Because EGFR is frequently overexpressed in TNBC, but up to now EGFR inhibitors are not useful drugs for TNBC treatment. To enhance the anti-cancer activity of tarceva and iressa on TNBC, combination therapy is required [28,29]. In this study, we show that extracts from red guava fruit can promote anti-cancer activities in iressa-, tarceva- and doxorubicin-treated TNBC.

The human mammary epithelial cell line MCF-10A and human TNBC cell lines MDA-MB-231 and MDA-MB-468 were purchased from American Type Culture Collection. These cells were maintained in a humidified atmosphere containing 5% CO2 at 37ºC and cultured in Dulbecco's modified Eagle's medium plus F12 (DMEM/F12 = 1:1) supplemented with 10% fetal bovine serum, penicillin (100 U OR IU OR UI/mL) and streptomycin (100 µg/mL; all from Sigma). In addition, insulin (10 µg/mL; Sigma) was used for MCF-10A cells.

Guava extracts were prepared as described [1]. Briefly, extracts from the mature stage of the red guava fruit were used in this study. The fruits were cut and seed sections removed before the flesh was ground with a pure juice machine (NationalMJ-C85N) to prepare a crude juice without extra water. The crude juice was centrifuged at 4,000 × g (BECKMAN COULTER Allegra X-15®) for 30 min, and the supernatant was collected (total extract). The lower molecular weight (≤ 30 kDa) extracts (LMW extracts) were obtained from total guava extracts centrifuged at 4ºC, 4000 × g for 30 min in an Amicon Ultra Filter. Finally, total extracts and LMW extracts were filtered with a 0.22-μm filter and stored at -80ºC until use. The protein concentration of total extracts and LMW extracts was ~1.8 g/ml.

Cell viability was determined with the MTT assay kit. Cells were cultured in 96-well plates (6 × 103 cells/well). After the indicated treatments, control and experimental cells were incubated for 3 h at 37ºC with components from the MTT assay kit. The absorbance of the reactive product was measured at 570 nm by using a Multiskan™ FC Microplate Photometer (Molecular Devices, Sunnyvale, CA, USA). Cell viability is indicated as a percentage corresponding to (A570 experimental group)/(A570 control group) × 100.

Cell cycle analysis was conducted using fluorescence‑activated cell sorting. Cells from control and experimental groups were washed with phosphate-buffered saline (PBS) and fixed with 70% ethanol at 4ºC for 1 h. The fixed cells were washed with PBS for 5 min and then treated with 1 ml PI solution containing 50 μg/ml PI, 100 μg/ml RNase A and 0.1% Triton X‑100 for 30 min at 37ºC. The cells were then washed with PBS and analyzed by flow cytometry (Partec CyFlow® SL; SysmexPartec GmbH, Görlitz, Germany). The resulting data were analyzed with CellQuest software (Becton-Dickinson).

Apoptosis and necrosis were determined by annexin V-FITC/PI staining. Briefly, control and experimental cells were collected and washed with cold PBS buffer. Cells were resuspended in 100 µL Annexin V/PI buffer and then treated with 5 µL of annexin V-FITC and 1 µL of PI for 15 min in the dark (at room temperature). Viable, apoptotic (annexin V+) and necrotic (PI+/ annexin V-) cells were analyzed by flow cytometry and quantified with CellQuest software.

The cells were treated with RIPA buffer (EMD Millipore, Billerica, MA, USA) and centrifuged (16,000 × g at 4ºC) for 20 min, and then cellular proteins were collected from the supernatant layer. Protein concentrations were determined with a Bradford protein assay kit (Bio-Rad, Hercules, CA, USA). Equal quantities (20 μg) of protein were loaded onto an SDS-polyacrylamide gel and separated by electrophoresis. The proteins were transferred from the gel to PVDF membranes (EMD Millipore). The membranes were blocked with 5% non-fat milk solution for 2 h at room temperature and were then washed with TBST buffer three times. The membranes were further incubated with primary antibodies at 4°C overnight. After being washed with TBST three times, the membranes were incubated with secondary antibodies for 1 h at room temperature. Finally, the membranes were treated with Western Lightning® Plus-ECL (Perkin Elmer, EU, USA), and immunolabeled proteins were observed using a Luminescence Image Analysis System (LAS-4000, FUJIFILM Electronic Materials Taiwan Co., Ltd., Tainan).

Data were collected from three independent experiments and are indicated as the mean ± SD. Means were analyzed with the t-test method by using Microsoft Excel (http://microsoft-excel-2010.updatestar.com/zh-tw). A P-value < 0.05 was considered statistically significant. *P < 0.05, **P < 0.01.

Determination of red guava extract effects on cell viability. (A) Human mammary epithelial cells (MCF-10A) were treated with no guava extract (control), 10% total extract (extracts) or 10% LMW extracts (MW ≤ 30kDa) for 72h at 37ºC. (B) TNBC cells (MDA-MB-231 and MDA-MB-468) were treated with no guava extract, 10% total extract or 10% LMW extract as in A. The 72-h cell viability was measured by MTT analysis. Values are expressed as the mean ± standard deviation from three independent experiments. *P < 0.05. 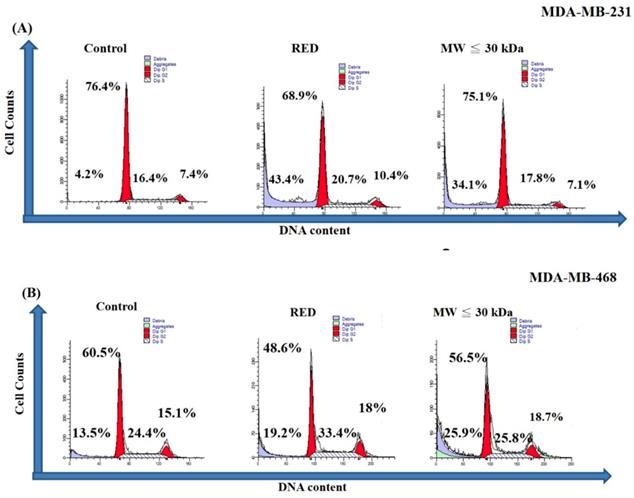 PARP and caspase-3 activity were assessed in TNBC cells treated with total extract and LMW extract. Based on western blotting, cleavage of PARP was increased in MDA-MB-231 and MDA-MB-468 cells treated with both extract types (Fig. 4). Caspase-3 is the upstream signal of PARP, and, therefore, caspase-3 activation was also analyzed. Cleavage of caspase-3 was increased in the total extract and LMW extract groups (Fig. 4). These data suggested that extracts from red guava fruit activate the caspase-3/PARP signaling pathway to induce cytotoxicity in TNBC cells.

Apoptotic and necrotic cell death analysis in TNBC cells treated with red guava extracts. (A) MDA-MB231 and (B) MDA-MB-468 cells were treated with no guava extract (control), 10% total extract (RED) or 10% LMW extracts (MW ≤ 30kDa). After a treatment period of 72 h, the cells were stained with annexin V-FITC and PI and analyzed using flow cytometry. 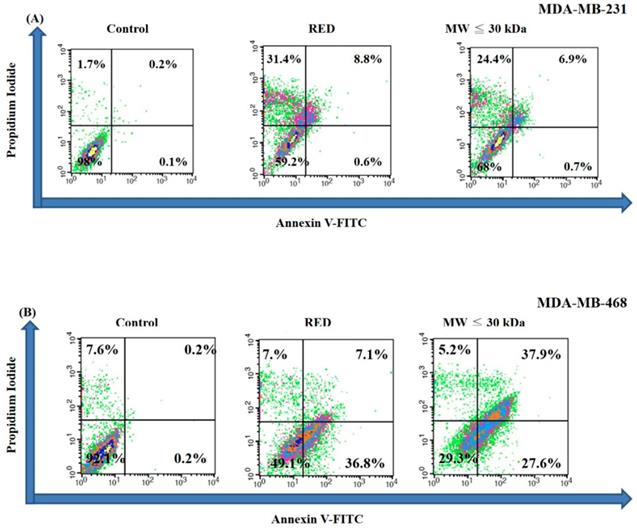 PARP, cleaved PARP and cleaved caspase-3 analysis in TNBC cells treated with red guava extracts. The protein levels of PARP, cleaved PARP and cleaved caspase-3 were assayed by western blotting. Cells were treated with no guava extract (control), 10% total extract (RED) or 10% LMW extract (MW ≤ 30kDa). Proteins were analyzed after 72 h of treatment. The protein levels of tubulin and actin were used as loading controls. 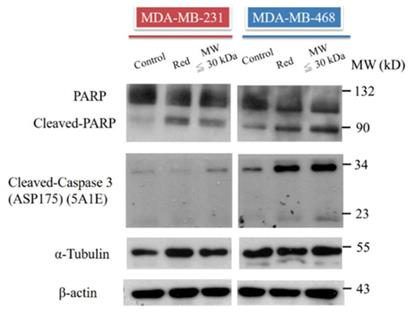 A previous study showed that extracts purified from guava fruit do not have anti-cancer activity in breast cancer cells [21]. However, extracts obtained from lycopene-rich red guava fruit can inhibit ER-positive breast cancer growth [22]. Here we also found that extracts purified from red guava fruit can inhibit TNBC growth, with LMW extracts and total extracts having similar cytotoxic effects on these cells. Lycopene is <30 kDa, and thus the LMW extracts in this study likely contained lycopene molecules. Previous studies have demonstrated that lycopene has anti-cancer activities [32-34]. Based on the experimental results from our study and previous studies, we believe that lycopene is one of the important molecules in red guava fruit with respect to anti-cancer effects on TNBC cells.

In support of another possible signaling pathway, combination treatment with EGFR inhibitors and PI3K/AKT inhibitors has a synergistic effect on TNBC [29]. Recently, a study reported that guava extracts can activate PI3K and AKT [36]. In our analysis, red guava extracts enhanced the cytotoxicity of EGFR inhibitors (tarceva and iressa) in TNBC cells. Therefore, we suggest that the PI3K/AKT pathway may play an important role in TNBC treatment.

2. Ravi K, Divyashree P. Psidium guajava: A review on its potential as an adjunct in treating periodontal disease. Pharmacogn Rev. 2014;8:96-100