Mesenchymal stem cells (MSCs) have been widely reported to be associated with angiogenesis, including dental stem cells [4, 8, 9]. Periodontal ligament stem cells (PDLSCs) are a class of odontogenic MSCs residing in periodontal ligament with functions of self-renewal, multi-directional differentiation potential and cellular regulation [10]. Recent study reported that PDLSCs had an ability of angiogenic promotion [4, 9], whereas the underlying mechanism of PDLSCs on angiogenesis under inflammatory micro-environment needed to be uncovered.

Paracrine is an important mode of intercellular communication, which is achieved by secreting soluble factors, protein complex and packaged mediators [11, 12]. Exosomes, a type of packaged mediators probably containing functional proteins, functionally transfers to other cells through such an emerging novel paracrine pathway [12, 13]. Numerous evidences showed that MSCs, as well as dental stem cells, could regulate function of endothelial cells via exosome-mediated signaling [14, 15]. Various biological factors were involved in angiogenic regulation [16]. However, the vascular endothelial growth factor (VEGF) was commonly regarded as the most potent agent participating in modulation of vascular endothelium [17]. Furthermore, VEGF was reported to be a major stimulant in the process of coupling between osteogenesis and angiogenesis [18, 19].

Numerous micro-RNAs (miRNAs) were investigated to play significant roles in dental tissues [20]. MiR-17, an inhibitor of VEGF, is a crucial microRNA associated with bone remodeling and angiogenesis [21-24]. Our previous study demonstrated that miR-17 regulated periodontal tissue regeneration via PDLSCs-mediated pathway in chronic periodontitis [21, 22, 24]. Therefore, current work was assumed to explore whether PDLSCs can regulate angiogenesis via exosome-mediated VEGF communication under inflammatory environment of periodontitis.

In current study, enhanced vascularization was found in periodontal ligament, as well as gingiva, derived from chronic periodontitis. PDLSCs cultured in inflammatory condition expressed more VEGFA and promoted tube formation of human umbilical vein endothelial cells (HUVECs). Additionally, blocking of exosomes secretion suppressed the tube formation, and inflammation inhibited expression of miR-17-5p while improved the VEGFA expression in exosomes. All the observations suggested that PDLSCs, under inflammatory condition of periodontitis, regulated angiogenesis through exosome-mediated transportation of VEGFA targeted by miR-17-5p, which uncovered a novel mechanism of aberrant vascularization in periodontal ligaments of periodontitis and proposed a therapeutic target for periodontitis.

Twenty adult female Sprague-Dawley rats (200.4±25.3g) were purchased from the Laboratory Animal Research Centre of the Fourth Military Medical University. Periodontitis was induced by injection of Escherichia Coli LPS (10 μL, 1 mg/mL) at the mediolateral of the left mandibular first molar, while the control group received 10 μL of saline. This administration was repeated every other day until 30 days. All the procedures were approved by Animal Care Committee of the Fourth Military Medical University, following the NIH Guide for the Care and Use of Laboratory Animals.

The micro-CT system (L-sp, GE, USA) was applied to scan the mandible samples with a source voltage of 80 kV, current of 500 mA and isotropic resolution of 14.97 mm. Three-dimensional images of the periodontal defects were reconstructed by the supporting software of micro-CT.

Frozen sections of periodontal tissues were prepared for immunofluorescent staining. The gingiva and periodontal ligament were tested by immunofluorescence against CD31 (ab119339) and VEGF (ab46154) (Abcam, USA) 30 days after induction of periodontitis. Sections were stained using primary antibodies at 4℃ overnight. The nuclei were then stained using DAPI at 37℃ for 30 min after incubation with secondary antibodies of Alexa Fluor 488 and Alexa Fluor 594.

Impacted premolars of patients were collected at the School of Stomatology, Fourth Military Medical University, whose teeth were extracted because of orthodontic purposes or periodontitis. All the procedures of human samples were approved by the Institutional Review Board for Human Subjects Research of Fourth Military Medical University (IRB-REV-2016021). All the patients signed informed consent to this study.

Periodontal ligaments derived from normal and periodontitis donors were separated from the middle of root surfaces, then were cut into small pieces (about 1 mm3) and digested using collagenase type I (3 mg/mL), dispase (4 mg/mL) (Sigma Aldrich, USA) for 15 min. Single-cell suspensions (2×103 cells) were seeded and cultured in α-MEM (Gibco, USA) with 10% FBS (Gibco), streptomycin (100 IU/ml; Gibco) and penicillin (100 μg/ml; Gibco) with an environment of 37℃ and humidified 5% CO2. PDLSCs were cultured in basic medium until reaching 80% confluence, then were induced by osteogenic condition medium for 28 days or adipogenic condition medium for 14 days. Alizarin Red and Oil O Red were used for staining of mineralized nodules or lipid droplets. The 2nd-5th passages of PDLSCs were used for each experiment.

PDLSCs were cultured with vesicle-free medium and serum. The residual cells were removed from harvested conditioned medium by centrifuging for 10 min at 500 g. Next, the apoptotic bodies and debris were removed by centrifugation of the supernatant for 30 min at 16,000 g. A following ultracentrifugation for 70 min at 150,000 g (Beckman Optima XPN-100, USA) was conducted to collect exosomes. The exosomes were stored at 80℃ in PBS for further research.

The isolated exosomes were suspended and dyed using Phosphotungstic Acid (PTA). The morphology of exsomes was observed and captured by transmission electron microscopy (Tecnai G2, USA).

Matrigel (BD Biosciences, USA) and a 24-well transwell plate (Corning, NY) were used for tube formation assay. 2×104 HUVECs per well were seeded in matrigel-coated 24-well plate, and indirectly co-cultured with 1×104 PDLSCs or 50 μg/mL exosomes for 5 h at 37℃. After incubation, tube formation was determined under optical microscope (Leica, Germany). The network structures of tube formation were measured using Image J software.

Transfection of miRNA mimics and inhibitor

All the data were displayed using mean ± SEM and were analyzed by Student's t test or one-way ANOVA for comparison of two or multiple groups with SPSS software v11.0 (SPSS, USA). P<0.05 was considered as statistically significant. 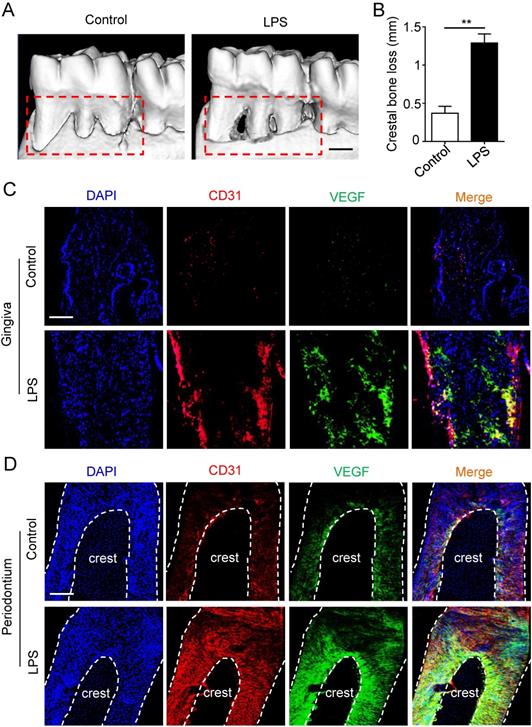 The 14 days-treatment was used for further study because of its better effect on pro-angiogenesis compared to the 7 days-treatment. To explore whether inflammation influenced the exosomes secretion, PDLSCs were treated with inflammatory factors. Scanning electron microscope (SEM) showed that the quantity of exosomes was increased in inflammation group compared to control group (Fig. 3A). In addition, expressions of exosomes specific markers (TSG101, CD63) were higher in inflammation group than that in control group (Fig. 3B). The aforementioned data suggested that inflammation promoted exosomes secretion of PDLSCs. Furthermore, HUVECs treated with exosomes derived from inflamed PDLSCs exhibited better tube formation than control group (Fig. 3C-E). However, knocking- down exosomes of PDLSCs using GW4869 resulted in declined tube formation of HUVECs (Fig. 4A-C) and angiogenic markers (CD31, VEGFA) expression (Fig. 4D). Taken together, all these results indicated that PDLSCs promoted angiogenesis of HUVECs via exosome-mediated pathway under inflammatory micro-environment. 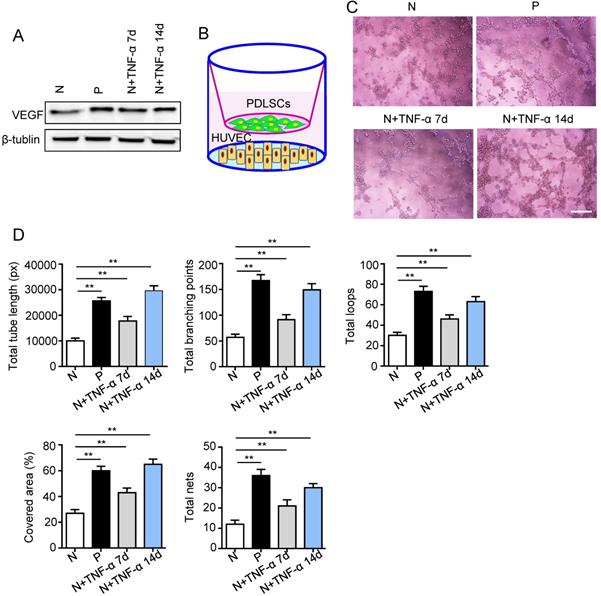 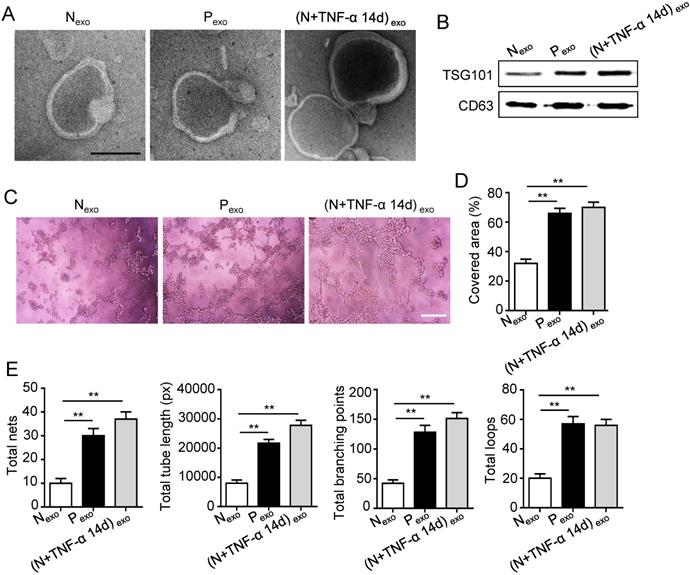 In order to clarify whether exosomes transported VEGFA to HUVECs, proteins were analyzed by western blot. The VEGFA expression was much higher in exosomes derived from inflamed PDLSCs than control group (Fig. 5A). In addition, HUVECs also showed higher VEGFA expression when treated with exosomes derived from inflamed PDLSCs compared to normal PDLSCs (Fig. 5B), suggesting that PDLSCs transported VEGFA to HUVECs via exosomes secretion under inflammation.

Previous studies reported that miR-17 was related to angiogenesis and VEGF was a target of miR-17. To further identify the alteration of miR-17 and its effect on VEGF expression under inflammatory micro-environment, the gain and loss experiment was conducted through transfecting mimics and inhibitor of miR-17-5p into PDLSCs respectively (transfection efficiency see Fig. S2). The data showed that miR-17-5p was inhibited under inflammatory condition (Fig. 5C), but its alteration did not affect the secretion of exosomes (Fig. S3). Additionally, silence of miR-17-5p did not affect the expression of VEGFA mRNA (Fig. 5D) but significantly improved VEGFA protein expression (Fig. 5E), suggesting that miR-17-5p regulated VEGFA at post-transcriptional level. Luciferase reporter test showed that overexpression of miR-17-5p largely reduced the luciferase activity of VEGFA 3'-UTR, whereas knocking-down of miR-17 increased the reporter luciferase activity (Fig. 5F), confirming that VEGFA was a target of miR-17-5p. Furthermore, compared to control group, the VEGFA expression significantly decreased in exosomes derived from PDLSCs transfected by miR-17-5p mimics (Fig. 6A), meanwhile the tube formation of HUVECs was correspondingly declined (Fig. 6B-D). Taken together, all these data indicated that inflammation relieved the VEGFA suppression by inhibiting miR-17-5p of PDLSCs, and improved VEGFA transferring via exosomes secretion to facilitate angiogenesis of HUVECs (Fig. 6E).

Effect of PDLSCs on angiogenesis when exosome-mediated pathway was blocked under inflammatory condition. Exosomes were blocked by GW4869. Tube formation of HUVECs (A) was observed under microscope, then total tube length, total branching points, total loops, covered area and total nets (B-C) were analyzed using Image J, and VEGF and CD31 of HUVECs (D) were detected by western blot after co-culturing with PDLSCs. Scale bar = 200 μm. **p<0.01. One-way analysis of variance (ANOVA). 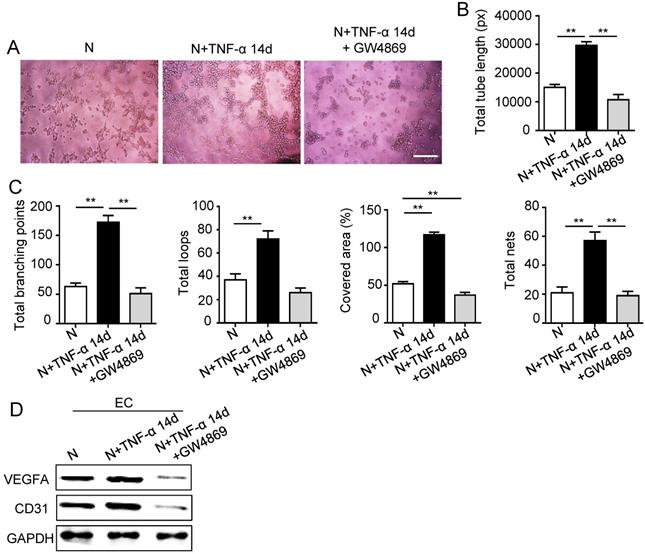 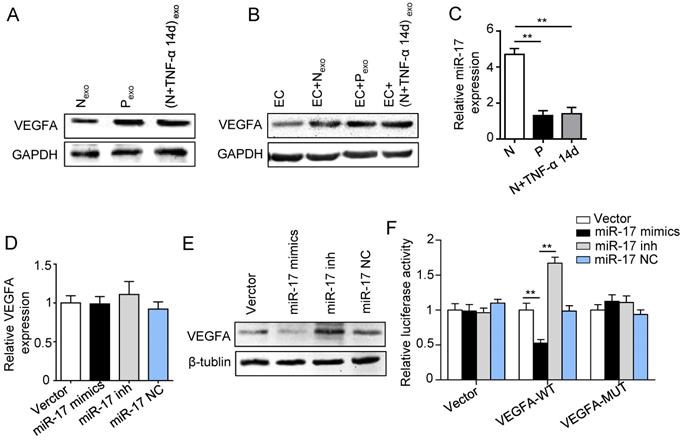 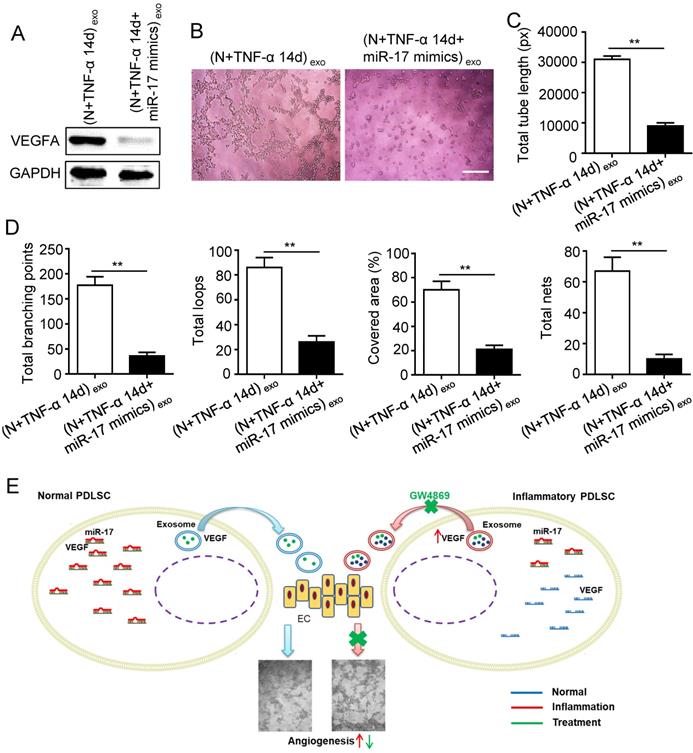 PDLSCs are a type of dental stem cells residing in periodontal ligaments, which participate in regulation of periodontal tissues regeneration [26]. Apart from feature of osteogenic capacity, PDLSCs has been investigated to modulate angiogenesis of ECs [4, 9]. An indirect communication, such as paracrine, might be the crucial pathway involved in the mechanism, because PDLSCs and ECs could not directly interact with each other physiologically. Therefore, a transwell indirect co-culture system was employed to mimic cell-to-cell communication. Functions of PDLSCs are affected by inflammatory environment resulted from periodontitis, such as proliferative capacity, osteogenic potential and regulatory ability [27-29]. In our study, VEGFA, the vascular specific marker, was up-regulated in PDLSCs derived from periodontitis, suggesting that inflammation might affect the pro-angiogenesis of PDLSCs. Furthermore, we found that the pro-angiogenic ability of PDLSCs was improved under inflammatory condition with a time-dependent manner, which corresponded to the results of gradually enhanced vascularization in periodontitis [3, 5]. Thus, we confirmed that inflammatory micro-environment in periodontitis might be the key regulator on pro-angiogenesis of PDLSCs, and inflamed PDLSCs regulated HUVECs via paracrine dependent pathway.

Exosomes is a carrier to transport active factors intercellularly, such as functional protein and small RNA[13]. In current study, expression of VEGFA was increased in exosomes derived from inflamed PDLSCs, suggesting the important role of exosome-VEGFA in angionenic regulation. However, the up-stream signaling regulating VEGFA expression under inflammation remains elusive. MicroRNAs have been widely investigated to regulate vascularization through various signaling [33, 34]. MiR-17, a potential inhibitor of VEGF, has been reported to be associated with periodontal regeneration [21, 22, 24] and tissue angiogenesis [23]. Nevertheless, the role of miR-17 on pro-angiogenesis of PDSLCs in periodontitis remains unknown. We found that miR-17-5p was decreased under inflammation with a time-dependent manner, indicating a significant role of miR-17 in periodontitis. Additionally, the fact of miR-17-5p targeting on VEGFA was verified. Moreover, overexpression of miR-17-5p in inflamed PDLSCs resulted in decreased exosome-VEGFA and declined tube formation. Meanwhile, the effect of miR-17-5p on exosomes secretion was eliminated, confirming that the reduction of exosome-VEGFA credited to VEGFA suppression but not exosomes inhibition triggered by miR-17-5p. In addition, in our study, exosomes secretion and miR-17-5p/VEGFA signaling were both affected by inflammatory micro-environment, suggesting that up-regulation of exosomes secretion and VEGFA expression might synergistically contribute to increased vascularization of periodontal ligaments in periodontitis.

All the aforementioned data suggested that vascularization of periodontal ligaments was up-regulated in periodontitis, which might credit to the fact that PDLSCs regulated angiogenesis of HUVECs via exosome-mediated transfer of VEGFA targeted by miR-17-5p.