Introduction: This study was designed to assess the effect of repetitive exposure to intravenous anesthetic agents on the immunity in mice.

Materials and Methods: The mice were divided into six groups: three intravenous anesthetic agents groups (dexmedetomidine, midazolam and propofol groups), and three corresponding control groups (CD, CM, and CP groups). The intravenous injections were administered once per day for 5 days. The immunity of mice was checked after the last intravenous injection. Histopathology and immunochemistry of liver and kidneys were evaluated. Cytokine levels in the blood was also checked. vs. evaluated with cytokine levels in the blood.

Conclusion: Repetitive exposure to dexmedetomidine and propofol reduced the expression of CD4+ T cells but did not induce any significant liver or kidney injuries.

Sedation is widely performed in clinical situations to facilitate diagnostic and therapeutic procedures. The most commonly used intravenous anesthetic agents for sedation are dexmedetomidine, midazolam, and propofol. The action of sedation is expressed via α2-adrenergic receptors for dexmedetomidine and γ-aminobutyric acid (GABA) receptors for midazolam and propofol (1-4). Both α2-adrenergic receptors (5, 6) and GABA receptors (7-9) modulate neurotransmitters and influence the immune system (10, 11). Repeated sedation for a short time is sometimes performed on the basis of patient status— for example, pediatric patients. Depending on the intravenous anesthetic agents used, different immunity patterns would be expected. However, this topic has not yet been investigated.

The data used to support the findings of the study are available from the corresponding author (Seong-Hyop Kim, yshkim75@daum.net) upon request.

Six-week-old male BALB/c mice (weight 20 g) were used for the experiment. The animals were quarantined for 2 weeks to confirm that they were pathogen-free. The mice were divided into six groups: three intravenous anesthetic agents groups (dexmedetomidine, midazolam, and propofol groups) and three corresponding control groups (CD group for dexmedetomidine, CM for midazolam, and CP for propofol).

The mice were placed in a clean dry cage without bedding before anesthesia, to avoid ingestion or inhalation during the procedure. The mice were maintained in room air at 25°C throughout the procedure to prevent hypothermia. Dexmedetomidine (0.4 mg/kg; Dexmedine inj., Hana Pharm, Seoul, Korea) midazolam (50 mg/kg Vascam inj.; Hana Pharm), propofol (26 mg/kg Anepol inj.; Hana Pharm) and normal saline for the corresponding control groups were intravenously injected through the tail vein (12-14). One milliliter was administered to animals in all groups. The mice were laid in the supine position in a V-shaped trough. The hypnotic response was confirmed by loss of the righting reflex (LORR). The LORR was defined as the inability of the mice to right themselves. The induction time from injection of the study drug to LORR was recorded. When the mice righted themselves after LORR, they were laid in the supine position again. Recovery of the righting reflex was defined as the ability of the mice to right themselves twice within 60 s. LORR duration was defined as the time interval between loss and recovery of the righting response. The sedated mice were carefully observed to check for any complications. A radiant heating lamp was applied to maintain body temperature during the procedure. The intravenous injections were administered once per day for 5 days. All procedures were performed by the same investigator at the same time. Respiration rate was observed during all procedures. Body temperature was monitored with a rectal thermometer and maintained above 36°C. The mice were euthanized by cervical dislocation immediately after the last intravenous injection. Immune cells undergoing apoptosis in the blood were checked by flow cytometry to evaluate the immunity. Histopathology and immunochemistry of the liver and kidney were also performed. We checked blood cytokine levels by enzyme-linked immunosorbent assay (ELISA).

After excising the spleen, the diaphragm was incised and the heart exposed. Blood samples were obtained from heart punctures using heparin-coated 2 ml syringes and collected in 1.5 ml Eppendorf tubes (Sigma Aldrich, St. Louis, MO, USA). The whole blood was centrifuged at 3,000 rpm for 5 min to separate the serum. The serum samples were isolated and saved in another 1.5 ml tube at -20°C to check the cytokine levels. The remaining blood was diluted in phosphate-buffered saline (PBS) to prevent coagulation, and PBMCs were separated from the remaining blood by Ficoll density-gradient centrifugation at 2,400 rpm for 20 min at room temperature. The PBMCs were washed in PBS and aliquoted into two 5 ml round-bottom tubes. They were then washed in fluorescence-activated cell sorting (FACS) buffer.

Tissue preparation for histopathology and immunohistochemistry

The order of the procedures for histopathology and immunohistochemistry was as follows: 1) tissue preparation, 2) fixation, 3) dehydration, 4) embedding, and 5) staining.

The liver and kidneys were obtained from the mice and fixed overnight at 25°C in a 4% paraformaldehyde solution (Biosesang, Seoul, Korea). The fixed liver was cut through the caudate and left lateral lobes. The fixed kidneys were transected. The dissected organs underwent tissue processing using a tissue processor (TP1020®; Leica Biosystems, Lincolnshire, IL, USA). The dissected organs were dehydrated through a series of graded ethanol baths to displace water and then infiltrated with wax. The organs were embedded in paraffin using an embedding center (EG1150®; Leica Biosystems). Tissue sections were cut to 4-μm thickness using a microtome (Leica Biosystems) and mounted on poly-l-lysine coated microscopic slides (Mutokagaku, Tokyo, Japan).

Toll-like receptor-4 (TLR4) is a transmembrane protein, and its activation leads to an intracellular signaling pathway and production of inflammatory cytokines, responsible for activating the innate immune system. Therefore, TLR4 was used to check the immunity in the tissues. The slides were deparaffinized and rehydrated. To avoid non-specific binding of antibody, the slices were incubated in blocking solution (Vector Laboratories, Burlingame, CA, USA) for 1 h and reacted with TLR4 rabbit polyclonal antibody (Abcam, Cambridge, UK) at a 1:100 dilution overnight at 4°C. The slides were then washed in PBS, and the sections were incubated for 1 h with biotinylated secondary goat anti-rabbit IgG (Abcam). After the incubation, the ABC Reagent (Vector Laboratories) was applied to react with the biotinylated antibody for 1 h at 25°C and attached with 3,3`-diaminobenzidine reagent (Vector Laboratories). The slides were stained with hematoxylin as a counterstain, dehydrated and cover-slipped using mounting medium (Vector Laboratories). Images were obtained under a microscope (Nikon, Tokyo, Japan). TLR4 intensity was quantified using Image J software (NIH, Bethesda, MD, USA).

“Resource equation method” was used to determine sample size because it was impossible to assume the effect size or no previous published studies for power analysis. With the formula for the resource equation method (E = Total number of animals - Total number of groups, any sample size, which keeps E between 10 and 20, should be considered to be adequate.), total number of animals between 12 and 22 for an intravenous anesthetic agent (between 36 and 66 for the three intravenous anesthetic agent including the corresponding control group) was adequate for sample size determination. Differences between groups were analyzed with the Mann-Whitney U test using GraphPad Prism software (ver. 5.01; GraphPad Software, La Jolla, CA, USA). Data are presented as means ± standard deviation [median (25-75%)]. A p-value < 0.05 was considered significant.

A total of 36 mice were used for the experiments and evenly allocated to the six groups. No complications occurred. 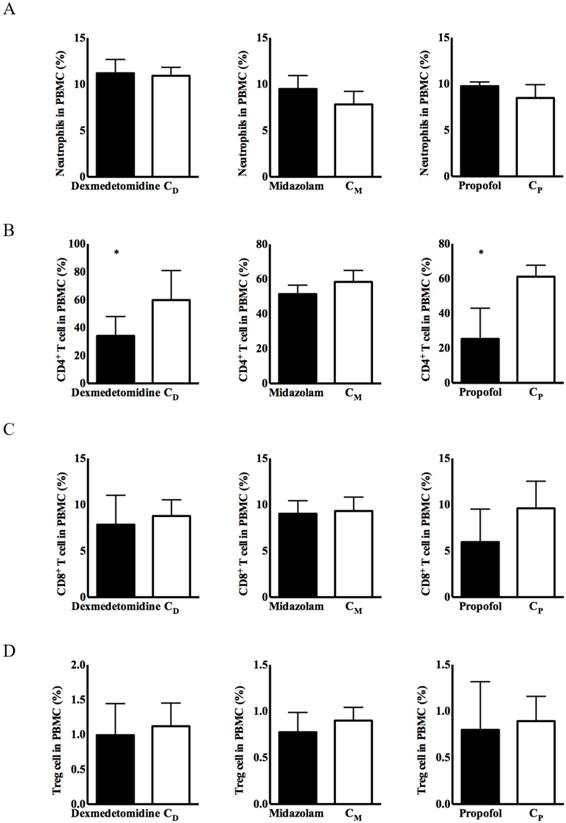 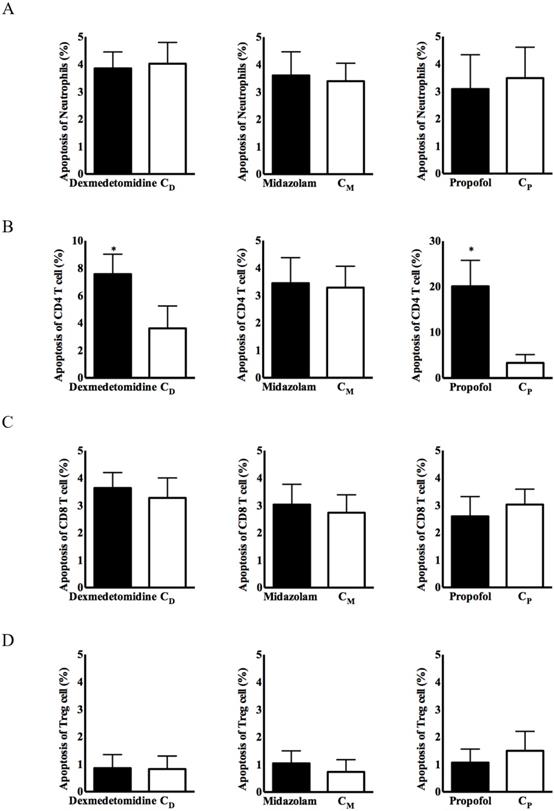 The histopathological findings in the liver and kidneys did not reveal any differences in the three intravenous anesthetic groups versus their corresponding control groups (Figure 3).

The cytokine levels were not different in any of the three intravenous anesthetic groups and the corresponding control groups (Table 2).

This study showed that repetitive exposure to dexmedetomidine and propofol reduced the expression of CD4+ T cells in the serum, and the intensity of TLR4 expression in the liver and kidneys, with increased apoptosis in PBMCs. However, repetitive exposure to the three intravenous anesthetic agents did not result in any liver or kidney injuries with increasing cytokine levels.

The significant differences in induction time and duration of LORR among the three intravenous anesthetic agents in the present study could be explained by their different pharmacokinetic and pharmacodynamic properties. Direct comparison among the three intravenous anesthetic agents was impossible. Therefore, we determined the maximal doses for sedation based on literature studies and compared them with the corresponding control groups (15-18). If a more objective surrogate for pharmacodynamics than LORR, such as electroencephalograph-based devices, was applied with the various doses of intravenous anesthetic agents used in the present study, a dose-response relationship could be derived and could give more information about immunity.

The present study showed different expression patterns of immune cells among intravenous anesthetic agents, suggesting that the agents have unique effects on the immunity. Repetitive exposure to dexmedetomidine and propofol reduced the expression of CD4+ T cells with increased apoptosis of PBMCs, indicating an immunosuppressive effect or protective effect against injury. This finding was supported by the lower expression of TLR4 in the liver and kidneys. However, no differences in cytokines were seen. Therefore, functional data for viable immune cells in the present study would be helpful. Wang et al. (19) reported that dexmedetomidine attenuated CD4+ T cells and restrained the phosphorylation of nuclear factor kappa-light-chain-enhancer of activated B cells (NF-κB), participating in the regulation of cytokine secretion in mice with hepatitis. Many studies have demonstrated that dexmedetomidine has a protective effect against injury through TLR4, with or without a reduction in cytokine levels (20-24). Propofol had a similar effect on immune cells and TLR4 expression. Although propofol increased the expression of immune cells compared with inhaled anesthetic agents, it significantly increased the apoptosis of lipopolysaccharide-treated mononuclear cells and lymphocytes (25-27). Many studies have supported a protective effect of propofol against injury through TLR4 (28-32). The difference in results between propofol and midazolam in the present study was remarkable, although both are GABAergic drugs. Sedation from intravenous anesthetic agents can indirectly modulate the immunity, and intravenous anesthetic agents can directly affect the immunity. GABAergic drugs, including propofol and midazolam, are reported to have immune modulating effects (33). However, Yuki et al. (34) reported that propofol suppresses T cell proliferation, whereas midazolam does not. Midazolam also has a protective effect against injury; however, this is not due to direct modulation of immune cells, but rather a direct effect on target cells (35).

The protective effect of intravenous anesthetic agents with a short duration on the liver and kidneys would be associated with non-specific histopathologic findings (36-38).

Only CD4+ T cells among the immune cells in the present study were affected by dexmedetomidine and propofol, in association with time elapsed. The immune response usually occurs following particular steps. The innate immune response, including of neutrophils, protects against injury (40). The maximal activity of neutrophils occurs 1-3 days after an injury. Signals from the innate immune response activate the acquired immune response. The maximal activity of T cells occurs 5 days after injury. Most studies investigated the immunity within 5 days after a single injection of an intravenous anesthetic agent under specific conditions (39-42). However, the immunity in the present study was checked 5 days after daily, repeated administration of the intravenous anesthetic agents. Therefore, the results of the present study would be different from previous reports. Moreover, we did not induce any injury before repetitive administration.

In conclusion, intravenous anesthetic agents for sedation should be chosen based on their pharmacokinetic and pharmacodynamic properties. Repetitive exposure to all three intravenous anesthetic agents in this study had no effect on liver and kidney injury, although dexmedetomidine and propofol reduced the expression of CD4+ T cells, and the intensity of TLR4 in liver and kidney with increased apoptosis in PBMCs.