Colorectal cancer (CRC) is one of the most common cancers in Han Chinese and is characterized by low rates of early diagnosis and poor survival rates. Angiopoietin-2 (Ang2), an endothelial tyrosine kinase, is involved in CRC progression, but little is known about the association between single nucleotide polymorphisms (SNPs) and diagnosis or prognosis of CRC. This study reports on the association between 5 SNPs of the Angpt2 gene (rs2442598, rs734701, rs1823375, 11137037, and rs12674822) and CRC susceptibility as well as clinical outcomes in 379 patients with CRC and in 1,043 cancer-free healthy controls. Carriers of the CG allele at rs1823375 and those with the GT+TT allele of the variant rs12674822 were at greater risk of CRC than their respective wild-type counterparts. Moreover, carriers of the GT or GT+TT allele in rs12674822 were significantly more likely to have tumor involvement in both the colon and rectum compared with wild-type (GG) carriers, while 5-year progression-free survival was also significantly worse in those carrying the GT+TT allele in rs12674822 compared with wild-type carriers. Our study is the first to describe correlations between Angpt2 polymorphisms and CRC development and progression in people of Chinese Han ethnicity.

Epidemiologic evidence demonstrates a rapid increase in the incidence of CRC in China since the mid-2000s, which has been attributed to changes in lifestyle and dietary behaviors, including an increasingly sedentary lifestyle, a Westernized diet and increasing alcohol consumption [1, 2]. Colonoscopy is considered to be the gold standard for CRC investigation [3], with proven efficacy in CRC prevention [4-6]. However, the ultimate efficacy of CRC screening programs depends upon the technique and technology of colonoscopy for accurately detecting colorectal neoplasia and CRC prevention; the protective effect of this procedure is severely compromised by evidence showing a wide variability in endoscopist performance in terms of adenoma detection rate, a proxy for the accuracy of the endoscopist [7]. Thus, the clinical impact of colonoscopy remains uncertain.

Moreover, current diagnostic methods for CRC detection are limited by various features such as the risk of tearing or perforation (i.e., colonoscopy, flexible sigmoidoscopy), or the failure to the failure to detect most polyps and some cancers (i.e., fecal blood tests) and by the fact that CRC is largely asymptomatic until it progresses to the advanced stages [8]. Diagnosing cytogenetic alterations could serve as more accurate noninvasive biomarker detection methods that provide diagnostic, prognostic and predictive CRC molecular markers in blood and stool [8]. CRC is associated with single nucleotide polymorphisms (SNPs) in gene loci, so analyses of the correlation between clinical status and SNP genotyping data can serve as a strategy for improving the diagnosis of CRC, predicting the risk of developing CRC and personalized treatment protocols [9-11]. SNPs in angiopoietin-2 (Angpt2) have been investigated for their association with lung and breast cancers [12, 13]. Angpt2 is localized to the human chromosome band 8p23.1 and supports endothelial cell homeostasis in terms of its angiogenic function [14, 15]. Wang and colleagues observed a significant positive correlation between levels of connective tissue growth factor (CTGF) and Angpt2 expression and similarly between CTGF and Angpt2 mRNA expression, as well as a significant association between high levels of Angpt2 expression and both clinical stage and metastasis in patients with osteosarcoma [16]. In another investigation, two SNPs in Angpt2 (rs1868554 and rs2442598) were significantly associated with acute lung injury in clinical stage II [13], while another study reported an association between five Angpt2 variants (s2442598, rs734701, rs1823375, rs11137037 and rs1267482) and associated with the risk of developing rheumatoid arthritis [17]. So far, no studies have searched for correlations between Angpt2 gene polymorphisms and CRC susceptibility amongst Han Chinese. We therefore performed a case-control study to evaluate the possible involvement of SNPs in the Angpt2 gene and CRC susceptibility in a cohort of Han Chinese patients diagnosed with CRC.

We collected blood specimens from 379 patients (cases) diagnosed with CRC in Dongyang People's Hospital between January 1, 2014 and August 31, 2018. A total of 1,043 healthy subjects without any history of cancer were also enrolled into the study and served as the control group. All study participants provided written informed consent for the study, which was approved by the Ethics Committee of Dongyang People's Hospital and the hospital's Institutional Review Board. Clinicopathologic characteristics were determined for all patients based on their medical records and all study participants completed a standardized questionnaire that acquired detailed clinical data on age, sex, smoking history and levels of alcohol consumption. Whole blood samples (3 mL) were collected from all study participants and stored at -80°C for subsequent DNA extraction.

Cox proportional hazards regression modeling evaluated the effects of Angpt2 genotyping results on the probability of recurrence or overall survival (OS) in multivariate analysis that adjusted for age. OS, including 5-year survival rate or probability of recurrence by the end of the study (August, 2018), was analyzed using Kaplan-Meier and univariate and multivariate Cox regression modeling. All data were analyzed using Statistical Analytic System software (v. 9.1, 2005; SAS Institute, Cary, NC, USA).

Next, Angpt2 genotypes in patients with CRC were investigated to clarify the risk of Angpt2 polymorphisms as according to clinical TNM stage, tumor site and pathologic grade. For this cohort, our initial analysis of the SNP rs12674822 revealed a significant correlation between rs12674822 variants (GG vs GT and GT+TT, respectively) and tumor sites (OR: 1.867, 95% CI: 1.101-3.168; OR: 1.746, 95% CI: 1.055-2.889, respectively; p < 0.05 for both comparisons) (Table 3). No significant findings were observed between other Angpt2 genotypes and clinicopathologic status (data not shown). In addition, no significant patterns of linkage disequilibrium were observed in any of the Angpt2 genotypes analyzed from CRC patients (data not shown).

The Mann-Whitney U-test or Fisher's exact test was used to compare values between controls and patients with colorectal cancer. * p < 0.05 was considered to be statistically significant.

Angpt2 is known to be involved in CRC progression and survival [20]. We used Kaplan-Meier survival analysis to demonstrate the correlation of Angpt2 polymorphisms with OS and progression-free survival (PFS) (Fig. 1). Interestingly, CRC patients carrying GT+TT at rs12674822 had lower five-year OS (p = 0.672) and significantly worse PFS (p = 0.041), compared to those with the GG genotype. This finding suggests that presence of the Angpt2 polymorphism at rs12674822 could serve as a genetic marker for PFS in Han Chinese patients with CRC.

The odds ratios (ORs) and their associated 95% confidence intervals (CIs) were estimated by logistic regression analysis. The adjusted odds ratios (AORs) with their associated 95% CIs were estimated by multiple logistic regression analysis that controlled for smoking, alcohol consumption and age. * p < 0.05 was considered to be statistically significant. 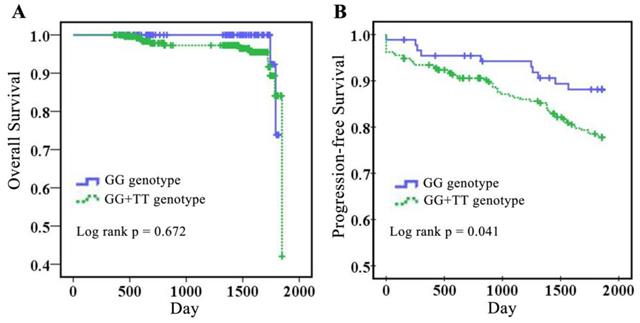 As with vascular endothelial growth factor (VEGF), the role of Angpt2 has been characterized as being pro-angiogenic or pro-inflammatory in cancer progression [21-24]. However, there are few reports regarding Angpt2 polymorphisms in various types of cancers. An American study that evaluated genetic associations between 17 candidate genes, including Angpt2, and the development of lymphedema following treatment for breast cancer concluded that Ang2 rs1823375 has no significant involvement in lymphangiogenesis or angiogenesis [18]. Previous studies have reported that Angpt2 gene polymorphisms are associated with sleep-disordered breathing [25] and lung injury syndrome [13, 26, 27], indicating that Angpt2 could be a biomarker for lung disease. Another study, in an African American cohort, has reported that two SNPs in Angpt2 (rs1868554 and rs2442598) are significantly associated with acute lung injury pathogenesis and susceptibility [13]. Our recent study also demonstrated that the Angpt2 rs11137037 polymorphism was associated with a high risk of clinical-stage lung cancer in people of Han Chinese ethnicity [28]. A recent study has revealed that Angpt2 polymorphisms were associated with patients with resected colorectal liver metastases [29]. In this study, we extended our numbers of patients and controls from our previous study [30-32]. Our results reveal that smoking and alcohol consumption are significant risk factors for CRC (Table 1; p < 0.05 for both comparisons). Specifically, Angpt2 rs1823375 and rs12674822 polymorphisms were associated with a higher susceptibility for CRC, in analyses controlling for smoking and alcohol consumption.

A systematic review has demonstrated that tumor-infiltrating lymphocytes have prognostic and predictive significance in colon, rectal and metastatic CRC [33]. Our results indicate that the GT and GT+TT variants of the SNP rs12674822 are significantly correlated with tumor site (i.e., the rectum). Our linkage disequilibrium analysis of all Angpt2 SNPs revealed no specific results (Supplementary Figure S1). The highest risk genotypes were rs734701 TC and rs2442598 AT (r2 = 0.66) (data not shown). Linkage disequilibrium between Angpt2 rs1823375 CG and Angpt2 rs12674822 GT (r2 = 0.12) had no such association, suggesting that it requires further analysis in other CRC cohorts.

In this study, we found that Angpt2 rs12674822 GT+TT were significantly related to PFS in CRC patients. SNP rs12674822 is located in the intron of Angpt2 and MCPH1, which each induce endothelial cell apoptosis and cell cycle arrest, respectively [34-36]. We propose that rs12674822 may increase Angpt2 mRNA expression by affecting tumor-derived endothelial cell apoptosis in CRC. Further investigations are needed to elucidate this aspect.

Limitations of this study include common issues such as the small sample size. Further studies with larger patient populations should explore the association between Ang2 and CRC susceptibility. Second, our study was restricted to a single Han Chinese cohort, which calls for further analyses of different Han Chinese cohorts, especially with regard to Western-style dietary consumption. Third, KRAS and BRAF mutation data were unavailable for the CRC cohort, which might be due to the fact that such examinations are expensive in China and that the diagnostic procedure there are complicated by long waiting times between clinic appointments and expenses relating to time off work, as well as the diagnostic procedures themselves.