The loss of pancreatic β-cells is a cause of diabetes. Therefore, replacement of pancreatic β-cells is a logical strategy for the treatment of diabetes, and the generation of insulin-producing cells (IPCs) from stem cells has been widely investigated as an alternative source for pancreatic β-cells. Here, we isolated stem cells from human urine and investigated their differentiation potential into IPCs. We checked the expression of surface stem cell markers and stem cell transcription factors, and found that the isolated human urine-derived stem cells (hUDSCs) expressed the stem cell markers CD44, CD90, CD105 and stage-specific embryonic antigen (SSEA)-4. In addition, these cells expressed octamer binding transcription factor (Oct)4 and vimentin. hUDSCs could differentiate into adipocytes and osteocytes, as evidenced by Oil-red O staining and Alizarin Red S-staining of differentiated cells, respectively. When we directly differentiated hUDSCs into IPCs, the differentiated cells expressed mRNA for pancreatic transcription factors such as neurogenin (Ngn)3 and pancreatic and duodenal homeobox (Pdx)1. Differentiated IPCs expressed insulin and glucagon mRNA and protein, and these IPCs also secreted insulin in response to glucose stimulation. In conclusion, we found that hUDSCs can be directly differentiated into IPCs, which secrete insulin in response to glucose.

Human stem cells have been of growing interest for in vitro models, disease modeling, and cell-based therapy. As there are significant differences between animal and human physiology, a translation to human biology is sometimes inadequate. Therefore, human stem cells are attractive for better models of human disease and drug reactions than animal models. In addition, stem cells have potential for tissue repair and regeneration.

Diabetes mellitus (DM) is a chronic metabolic disorder characterized by a relative or absolute deficiency in circulating insulin levels, resulting in high blood sugar levels over a prolonged period [1-3]. Pancreatic β-cell loss is known to be a major cause of both type 1 and type 2 diabetes [4]. Therefore, restoration of insulin-producing β-cells would be a logical strategy for the treatment of both forms of diabetes. Insulin therapy has been used to treat diabetes, but it can have side effects such as hypoglycemic episodes. Islet transplantation is an effective therapy for treating severe type 1 diabetes [5], but there are limitations due to a lack of donors of islet sources [6]. In this regard, differentiated insulin-producing cells (IPCs) using human stem cells are an attractive source of alternative pancreatic islets for transplantation [7]. In addition, a consistent source of differentiated β-cells from human stem cells would provide a unique and valuable drug discovery platform for diabetes, and could also replace for in vitro or in vivo model systems [8, 9].

Human urine-derived stem cells (hUDSCs) have advantages, including the easy and inexpensive isolation procedure [10]. They can also differentiate into various types of cells, such as adipocytes, osteocytes, chondrocytes, myocytes, and neurons [11-13]. However, the differentiation of hUDSCs into IPCs has not been investigated. Therefore, in this study, we isolated hUDSCs according to a previous report, and their potential for use as stem cells was confirmed in accordance with existing reports [12, 14]. Finally, we confirmed that isolated hUDSCs are capable of differentiating into insulin-producing β-cells and suitable for use in the treatment of diabetes.

The protocol for the collection of urine samples from healthy donors and the isolation of stem cells from urine was reviewed and approved by the Public Institutional Review Board designated by the Ministry of Health and Welfare, Korea (P01-201507-31-002).

To isolate stem cells from urine, fresh urine samples (average amount of 50 ml per sample, four subjects) were immediately transferred to the laboratory under sterile conditions at 4°C. Each sample was centrifuged at 500 × g for 5 minutes and the cell pellets were gently resuspended in sterile phosphate buffer saline (PBS) solution. After the cell suspension was centrifuged at 500 × g for 5 minutes, the cell pellets were resuspended in 3 ml of medium composed of 1:1 mixture of DMEM/F12 (ThermoFisher Scientific, MA, USA) and keratinocyte serum free medium (KSFM, ThermoFisher Scientific), containing 5% fetal bovine serum (FBS; ThermoFisher Scientific) and 1% penicillin/streptomycin (Welgene, Deagu, Korea). The cells were seeded (1×104 cells/well) to 24-well plates (Falcon, USA), and incubated at 37°C in a 5% CO2 and air humidified incubator (Heraeus HeraCell 150, Thermo). Culture medium was changed every two days until the cells formed colonies. Each colony was transferred to individual wells of 24-well plate and cultured. The cells were split when they reached 70-80% confluency.

To check the expression of stem cell markers on the surface, the cells at passage 3 were harvested and fixed with 70 % EtOH overnight at 4°C. After washing twice with PBS, cells (5×105 cells) were stained with antibodies against FITC fluorescence-conjugated anti-CD31, anti-CD34, anti-CD44, anti-CD90, anti-CD105, or anti-SSEA-4 antibodies (BD Pharmingen, USA) for 1 h at room temperature. Cells were washed twice with PBS and analyzed on a BD LSR II Flow Cytometer (BD Biosciences, USA).

hUDSCs or hADSCs were cultured on coverslips, washed with PBS and fixed with 4% paraformaldehyde (Biosesang, Korea) for 10 minutes at room temperature. Following fixation, the cells were washed with PBS and then blocked with PBS, containing 1% bovine serum albumin (BSA) and 0.1% Triton X-100, for 30 minutes at room temperature, and incubated overnight with anti-vimentin, anti-E-cadherin, or anti-oct4 (Santa Cruz Biotechnology, Inc., USA) antibodies in a humidified chamber at 4°C. The cells were then incubated with fluorescein-conjugated secondary antibodies (Life technology, USA) and 4',6-diamidino-2-phenylindole (DAPI) (Sigma-Aldrich, MO, USA) for 1 h, in the dark, at room temperature. Following this, the coverslips were mounted with fluorescence mounting medium (DAKO, CA, USA) and cell images were observed under a confocal microscope (Zeiss, Germany).

After 15 days of IPC differentiation, cells were washed twice with PBS. The cell clusters were incubated with 0.2% glucose Krebs (KRB) buffer for 1 h at 37°C to synchronize. Thereafter, the clusters were incubated with KRB buffer, containing 3 or 20 mM glucose for 1 h at 37°C. The supernatants were collected and diluted 10-fold, and released insulin was measured using an enzyme-linked immunosorbent assay (ELISA) kit, according to the manufacturer's protocol (ALPCO, USA). Insulin content was normalized to protein levels, which was determined using a Pierce BCA Protein Assay kit (ThermoFisher Scientific).

qRT-PCR was followed the methods of Cha et al.[15], briefly, total RNA was extracted from the cells using RNAiso Plus (Takara Bio Inc., Japan) and cDNA was prepared using the PrimeScript™ cDNA synthesis kit (Takara Bio Inc., Japan) according to the manufacturer's instructions. cDNA samples were analyzed by the SYBR® Premix Ex Taq™, ROX plus (Takara Bio Inc.) on Bio-Rad cyclers (USA). Gene expression was normalized to the endogenous housekeeping control gene, cyclophillin. Relative expression was calculated for each gene using the ΔΔCT (where CT is the threshold cycle) method. The primer sequences used are listed in Table 1.

On day 15 of IPCs differentiation, clusters were washed with PBS and fixed using 4% paraformaldehyde in PBS at 4°C overnight. The fixed clusters were washed with PBS, then blocked with PBS, containing 1% BSA and 0.2% Triton X-100, for 1 h at room temperature, and incubated overnight with anti-Pdx1 (Millipore, Germany), anti-insulin (Abcam, UK), anti-glucagon (Cell signaling, USA), and anti-c-peptide (R&D systems, USA) at 4°C overnight. Clusters were then stained with a fluorescence-conjugated secondary antibody (Life Technologies, Carlsbad, CA) for 2 h at room temperature, the nucleus was stained with DAPI (5 μg/ml) for 10 min, mounted with VECTASHIELD (Vector Laboratories, USA), and observed under a confocal microscope (Zeiss, Germany). To evaluate PDX-1, insulin, glucagon and c-peptide, 8~15 clusters were imaged from three independent experiments. Image J program (https://imagej.nih.gov/ij/) was used to quantify the fluorescence intensity.

Statistical analysis was carried out by one-way ANOVA with Bonferroni analysis. Data are presented as means ± SEM. Values of p<0.05 were considered significant.

Isolation and characterization of hUDSCs

The hUDSCs isolation procedure is summarized in Figure 1A. The cells obtained from the urine samples were cultured and the adherent cells on the plate as a colony were transferred to a 6-well plate. Several different colonies were observed 5 days after initial seeding (Figure 1B). When the colony dissociated and was cultured for several passages, one of the selected clones, hUDSC001.01 showed an elongated morphology (Figure 1C). When we examined whether these cells were contaminated with mycoplasma by PCR, we confirmed that the cells were not contaminated with mycoplasma (Figure 1D).

To examine the expression of stem cell surface markers in hUDSCs, we performed fluorescence-activated cell sorter (FACS) analysis after staining hUDSCs with antibodies against CD44, CD90, CD105, or SSEA-4. The cells obtained from urine were positive for mesenchymal stem cell antigens, such as CD44, CD90, and CD105. We found that more than 95% of the cells expressed CD44, and almost all the cells expressed CD90, and CD105, and SSEA-4, but not the endothelial (CD31, CD34) markers (Figure 2A). We next examined the protein expression of selected pluripotent markers in hUDSCs by immunocytochemistry. The protein expression for vimentin and Oct4 was detected, but E-cadherin was not expressed in hUDSCs. In contrast, human adipose-derived stem cells (hADSCs), which were used as a positive control, expressed vimentin only (Figure 2B).

Differentiation of hUDSCs to adipocytes and osteocytes 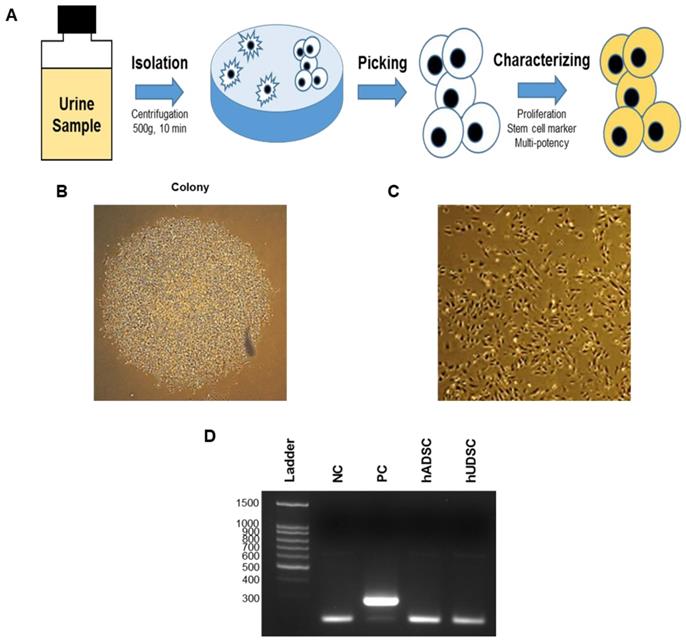 Characterization of hUDSCs for mesenchymal and stem cell markers. (A) The expression of CD31, CD34, CD44, CD90, CD105, and SSEA-4 was assessed by FACS analysis. (B) The expression of E-cadherin and OCT4 was analyzed by immunocytochemistry. hADSCs were used as a positive control. Magnification: 200×. 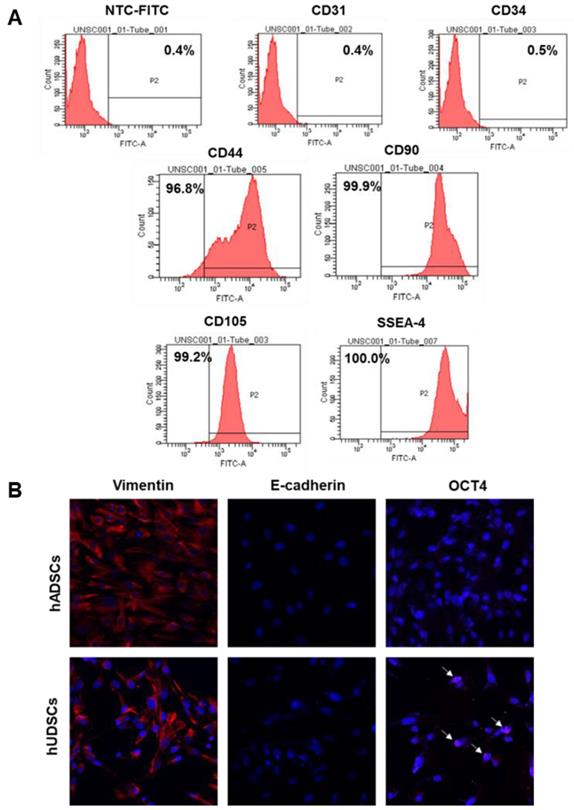 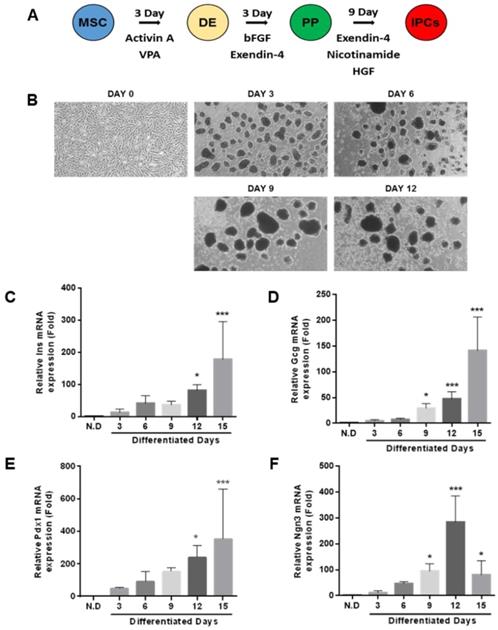 Differentiation of hUDSCs into IPCs

Differentiation IPCs from hUDSCs secreted insulin in response to glucose levels. (A) Differentiated IPC clusters were fixed and stained with anti-INS (green), anti-PDX1 (red), anti-C-PEP (peptide) (Red) or anti-GCG (red) antibodies and observed by confocal microscopy. Blue indicates DAPI (nuclear) staining. Scale bar indicates 50 µm. (B) Insulin secretion from differentiated IPCs in the presence of 3 mM and 20 mM glucose was analyzed by as described in “Materials and Methods”. n=3, ***p<0.005. 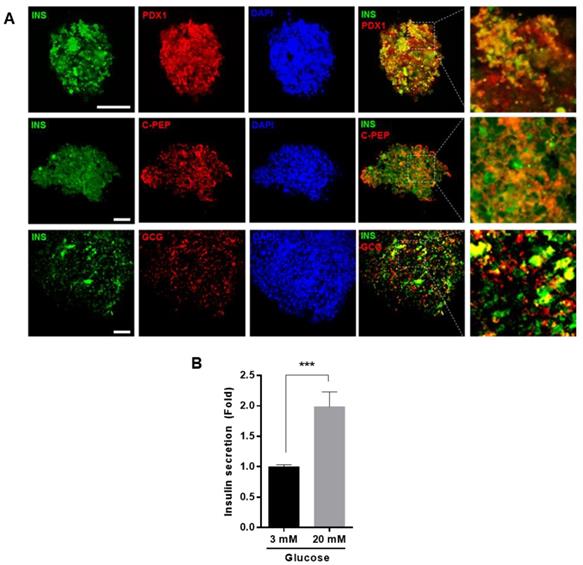 Type 1 diabetes results from absolute insulin deficiency due to autoimmune-mediated destruction of pancreatic β-cells [17]. Therefore, daily insulin injections are required for the survival for type 1 diabetic patients. However, exogenous insulin injections cannot tightly regulate insulin levels as endogenous β-cells do in response to physiological changes in blood glucose levels. Therefore, islet transplantation is considered to be an appropriate therapeutic strategy for the treatment of type 1 diabetes; however, the lack of islet donors is a limitation for this therapy. As an alternative source to solve this limitation, differentiated islet-like cells from stem cells, including mesenchymal stem cells, embryonic stem cells, and induced pluripotent stem cells, have been investigated [18, 19].

Mesenchymal stem cells are found in a number of tissues, and may have the ability to trans-differentiate into multiple cell types including adipocytes, osteocytes, myocytes neuronal cells, and islets-like cells [20]. Therefore, the mesenchymal stem cells can be obtained from adipose tissue, bone marrow, muscle, and so on. However, the isolation of stem cells from most tissues requires invasive procedures [21-26].

Several stem cell markers, Oct4, sex determining region Y-box2 (Sox)2, Rex1, and Nanog, are needed to maintain self-renewal and the undifferentiated state of stem cells [30-33]. Oct4 was found in oocytes, mouse embryos and germ cells, as well in embryonic stem cells, but not in the differentiated cells [34]. Vimentin is also a kind of stem cell marker, particularly expressed in mesenchymal stem cells. The expression of Oct4 and vimentin was also detected in hUDSCs in our study, whereas the Oct4 was not detected in hADSCs. These results suggest that hUDSCs display pluripotent stem cell markers and might have differentiation potential.

We demonstrated that the isolated hUDSCs expressed the mesenchymal stem cell markers and can be directly differentiated into IPCs. The differentiated IPCs expressed pancreatic transcription factors, insulin and glucagon. In addition, these IPCs secrete insulin in response to glucose. Although further investigations are needed, our results suggest that hUDSCs might be useful source for cell therapy in type 1 diabetes.

3. Docherty K. Growth and development of the islets of Langerhans: implications for the treatment of diabetes mellitus. Curr Opin Pharmacol. 2001;1(6):641-650