Spinal cord injury (SCI) can cause loss of mobility in the limbs, and no drugs, surgical procedures, or rehabilitation strategies provide a complete cure. Exercise capacity is thought to be associated with the causes of many diseases. However, no studies to date have assessed whether congenital exercise ability is related to the recovery of spinal cord injury. High congenital exercise ability (HE) and low congenital exercise ability (LE) mice were artificially bred from the same founder ICR mice. The HE and LE groups still exhibited differences in exercise ability after 13 generations of breeding. Histological staining and immunohistochemistry staining indicated no significant differences between the HE and LE groups on recovery of the spinal cord. In contrast, after SCI, the HE group exhibited better mobility in gait analysis and longer endurance times in the exhaustive swimming test than the LE group. In addition, after SCI, the HE group also exhibited less atrophy than the LE group, and no inflammatory cells appeared. In conclusion, we found that high congenital exercise ability may reduce the rate of muscle atrophy. This result can be applied to sports science and rehabilitation science as a reference for preventive medicine research.

The Ministry of Health and Welfare of Taiwan estimates that at least 23,000 individuals with spinal cord injury (SCI) reside in Taiwan, and approximately 2500 new spinal cord injuries occur annually [1]. The social cost of each patient's lifetime is about TWD 25 million. The most common causes of SCI are traffic accidents, followed by falls, sports accidents and violence. Many animal models, included contusion, compression, dislocation, transection, ischemic, excitotoxic, photochemical and electrolytic models, have been used to study SCI, depending on the aims of the researchers [2]. Spinal cord transection is performed after laminectomy to induce complete or targeted interruption of the spinal cord. Complete and incomplete transections result in differences in plasticity in the spinal cord, and incomplete transection reduces the physical harm to the cord and physical separation [3]. The marked atrophic response of the affected muscles that is seemingly with incomplete SCI.

SCI causes many pathophysiological changes and has long-term effects on the body [4-6]. SCI involves both primary and secondary injury mechanisms. The main mechanism of primary injury is related to the initial mechanical damage. The secondary mechanisms of injury occur after the initial traumatic event and cause tissue destruction during the first few hours after the injury. These secondary mechanisms include ischemia, axonal degeneration, vascular dysfunction, and oxidative stress [7]. In addition to the local effects on the spinal cord, SCI also affects the functions of skeletal muscle. Previous studies have reported that a lack of physical activity and the loss of communication between the central nervous system and skeletal muscle due to SCI rapidly reduces skeletal muscle mass [8]. SCI patients are at higher risk of developing systemic metabolic disorder, suggesting that the reduction of muscle mass may result in part from systemic metabolic disorder [9, 10]. Following SCI, muscle exhibits markedly increased fatigability and altered rates of contraction and relaxation [11]. Furthermore, the histopathological changes of muscle also include fiber-type transformation, connective tissues changes and vasculation [8]. The status of muscle and locomotion can be assessed to evaluate spinal cord injury and treatment efficacy.

Outbred rodents such as Sprague-Dawley rats and ICR mice are widely used in sport science [12-14]. The congenital capacity of animals can be artificially bred to produce stable inherited lines for basic studies with different purposes. Koch et al. divided a founder population into high and low exercise capacity mice by using a treadmill running protocol and further found that the endurance capacity of the high-capacity mice was 1.7 times greater than that of low-capacity mice after 6 generations of breeding [15]. In our previous study, we found that the same batch of ICR mice exhibited great variety in exercise performance. By exhaustive swimming exercise test, we divided the mice into high and low congenital exercise ability groups. After 13 generations of breeding, the mice still exhibited differences in exercise ability in the exhaustive swimming exercise test.

Male outbred ICR mice were purchased from BioLASCO (Control group) (A Charles River Licensee Corp., Yi-Lan, Taiwan). High- and low-congenital exercise ability mice (the HE group and the LE group, respectively) were artificially bred to produce stable inherited lines in the laboratory of Prof. Chi-Chang Huang. For example, the average swimming exhaustion time of the HE group (thirteenth generation) was 97.18 ± 27.97 minutes, while that of the LE group was 2.25 ± 0.30 minutes. All animals were maintained at room temperature (23 ± 2°C) and 55 ± 10% humidity and fed a standard laboratory diet (#. 5001; PMI Nutrition International, Brentwood, MO, USA) with distilled water ad libitum.

All procedures described in this study were conducted under the approval of the Institutional Animal Care and Use Committee (IACUC) of National Taiwan Sport University after review of the animal study protocols, and the ethics committee of IACUC approved this study (IACUC-10626). All procedures were performed under anesthesia by isoflurane. We made incision along the midline of each 8-week-old male ICR mouse and exposed the dorsal surface of the spinal column from approximately T9 to T10. We performed a laminectomy followed by a left lateral hemi-section with a scalpel and cut the cord, resulting in a moderate injury to the spinal cord. The sham operation consisted of a laminectomy alone. The fascia and skin were sutured closed, and the animals were allowed to recover on a heating pad at 37.8°C. Postoperative treatment consisted of saline (1.0 ml administered subcutaneously) for rehydration. The animals were returned to the preoperative housing conditions, where they began eating and drinking within 3 h of surgery. The mice were assessed with gait analysis and the exhaustive swimming exercise test at day 20 before being euthanasia by 95% CO2 asphyxiation at day 21 post SCI. The mice were weighed and the spinal cord and muscle were collected for further analysis. The detailed experimental procedure is illustrated in Fig. 1. 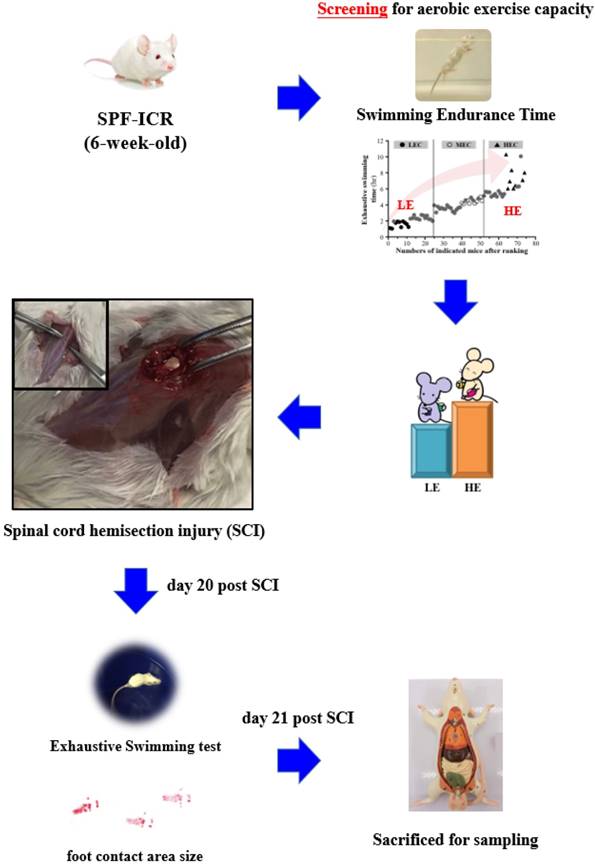 Gait analysis was performed on a Noldus Catwalk XT (Noldus, Wageningen, The Netherlands). A compliant run met the run criteria: a maximum run duration of 15 s, with a maximum speed variation of 65%. We rejected data in which the animal changed speed or stopped before completing three full gait cycles. Hind limb width and step size were further analyzed.

The exhaustive swimming exercise test was performed before and after SCI. A weight equivalent to 5% of body weight in the form of lead fish sinkers was attached to the root of the mouse tail. The tank was maintained at 27°C during the swimming process, and the endurance of each mouse was measured as swimming time, recorded from the beginning of the test to exhaustion, which was defined as uncoordinated movements and failure to return to the surface within 7s. The time of floating, struggling and making necessary movements was assessed until possible drowning and exhaustion.

Spinal cord and muscle tissue were fixed in 10% neutral buffered formalin for one day, dehydrated, embedded in paraffin, cut into 4μm sections, and stained with hematoxylin and eosin (H&E) for histological examination.

The 4-μm formalin-fixed, paraffin-embedded colorectal sections were subjected to deparaffinization, and the slides were submerged in 10 mM citrate buffer (pH 6.0) until boiling for antigen retrieval. Hydration was carried out prior to quenching of endogenous peroxidase activity (3% H2O2 in methanol for 10 min). The sections were incubated overnight with the primary anti-glial fibrillary acidic protein (#ab7260, Abcam, MA, United States) diluted at 1:200. The slides were subsequently treated with PictureTM HRP Polymer conjugate at room temperature for 20 min. HRP localization was visualized using a Liquid DAB+ Substrate Chromogen System (#K3468, Dako, CA, United States).

3.1. The HE group and LE group exhibited differences in congenital exercise ability as compared with the control group

To confirm the phenotype of the congenital exercise ability, all mice performed the exhaustive swimming exercise test with 5% body-weight loading before SCI. The average exhaustive swimming time of the HE group was 3152 ± 60.5 seconds, while that of the LE group was only 114 ± 3.4 seconds. For comparison, the average exhaustive swimming time of the control group was 1301 ± 443.4 seconds (Fig. 2A). Additionally, body weight was not significantly different among these three groups (Fig. 2B). The results indicated that the congenital exercise ability could be artificially bred to produce stable inherited lines.

Stable inherited lines of mice exhibited differences in congenital exercise ability. (A) exhaustive swimming time and (B) terminal body weight of the control, HE and LE group. Data are expressed as the mean ± SD and were analyzed by two-way ANOVA followed by Turkey's post hoc test. *p < 0.05, n = 7.

3.2. HE group still exhibited higher exercise ability than the LE group after SCI

3.3. Congenital exercise ability may not affect recovery of the spinal cord

3.4. HE group exhibited less severity of muscle atrophy than did the LE group after SCI

HE group still exhibited higher exercise ability compared with the LE group after SCI. (A) exhaustive swimming time (B) foot contact area size by gait analysis. (C) Muscle weight and (D) terminal body weight of the control, HE and LE group. Data are expressed as the mean ± SD and were analyzed by two-way ANOVA followed by Turkey's post hoc test. *p < 0.05, n = 5. 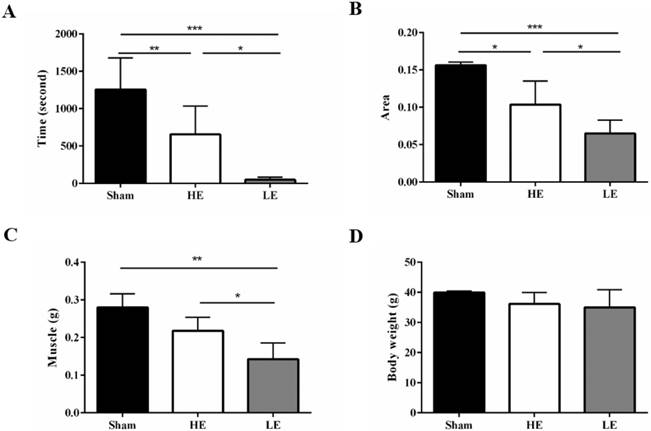 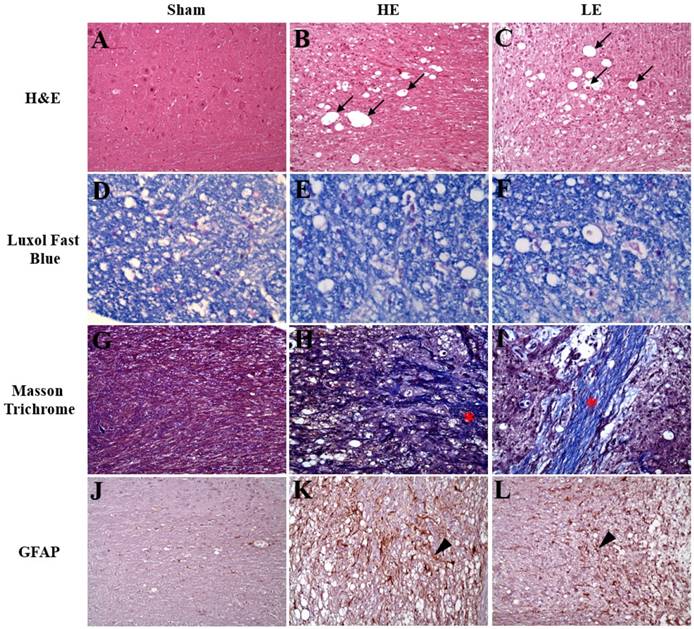 In the present study, we bred differences in congenital exercise ability from founder ICR mice selected by exhaustive swimming exercise test. Even after SCI, performance on gait analysis and the exhaustive swimming exercise test was better in the HE group than in the LE group. However, no studies have assessed the effects of congenital exercise ability on spinal cord injury. The results are divided into two parts, namely, spinal cord and muscle, for discussion.

Previous studies have shown that SCI can cause nerve damage and systemic inflammation. Numerous studies have also shown that exercise can help SCI patients to recover [19-21]. Yan Sun et al. indicated that exercise can ameliorate SCI damage through NF-κB signaling pathways [22]. Several studies have also indicated that inhibition of inflammation can improve axonal regeneration [23, 24]. In the present study, as the evidence is not clear yet in regards to the direct relationship between congenital exercise ability and inflammation, fibrosis, or demyelination. Conversely, exercise intervention after SCI may play an important role in spinal cord recovery.

In the present study, we found that after SCI, the muscle weight of the HE group was greater than that of the LE group. In our previous study, we found no differences in muscle weight between the HE and LE groups without SCI [25]. These results indicated that congenital exercise ability may influence the pathology of SCI in muscle tissue. Indeed, our H&E and Masson Trichrome staining results indicated reduced muscle atrophy and fibrosis of the HE group as compared with those of the LE group. A previous study has reported that increasing the uptake of glucose and fatty acids by muscle cells and enhancing the metabolism of glucose and lipids can increase the skeletal muscle mass and strength and enhance the endurance of the body [26]. In our previous study, high exercise capacity mice exhibited greater glucose tolerance and maintained better homeostasis than low and medium exercise capacity mice, indicating better glucose utilization in the high exercise capacity mice [25]. Based on this evidence and the fact that the mice were bred from the same founder mice, better glucose utilization may contribute to amelioration of muscle atrophy.

This work was supported by a grant from the Ministry of Science and Technology (MOST) of Taiwan (grant No. MOST 107-2410-H-179-006-MY3 to Prof. Chi-Chang Huang) and financial support from an institutional grant to Dr. Tai (grant No. TCRD-TPE-107-43; Taipei Tzu Chi Hospital, Buddhist Tzu Chi Medical Foundation). The authors are grateful to Dr. Chien-Chao Chiu and graduate students at the Sport Nutrition Laboratory, National Taiwan Sport University, for their technical assistance in conducting the animal experiments.