Background: Mesenchymal stem cells (MSCs) have been investigated as a new treatment option for various diseases in recent years. However, the role of placenta-derived MSCs in children with asthma remains unclear. We assessed the effect of placenta-derived MSCs on T cell immune responses and cytokine IL-5 levels according to cultures in children with and without asthma.

Study design: We enrolled children with and without asthma and recorded asthma symptom scores in the asthma group. Blood samples from children were collected to isolate peripheral blood mononuclear cells (PBMCs) and determine the total IgE level. The PBMCs were cultured in vitro with or without MSCs after stimulation with human anti-CD3 and anti-CD28 antibodies (0.5 μg/mL) to evaluate the effect of placenta-derived MSCs. Flow cytometry was performed to detect the activation and proliferation of CD4+ and CD8+ T cells. Pre- and post-culture IL-5 levels were measured in all samples.

Conclusions: Placenta-derived MSCs exerted an anti-IL-5 effect and reduced the IL-5 level in culture in different subgroups of children with asthma.

Asthma is a common respiratory tract disease that manifests as an allergic and inflammatory process in children. Although several factors related to asthma are understood, its precise cause remains unknown. The complex relationships among genetic, environmental, pharmacological, and immunological factors in this disease still require further investigation [1]. Asthma is relatively common, and the pathophysiology of asthma is characterized by injury, inflammation, and eventually the remodeling of airways [2]. For a long time, asthma was regarded as a chronic type 2 T helper (Th2) cell-driven disease with eosinophilic airway inflammation [3]. Eosinophils develop from hematopoietic CD34+ progenitor cells, and interleukin (IL)-5 is a key cytokine involved in the differentiation, proliferation, and survival of eosinophils [4]. IL-5 is mostly secreted by allergen-reactive T cells, mast cells, and eosinophils [5]. A study reported that CD34+/IL-5+ cells could be found in patients with asthma [4]. Notably, IL-5 plays a crucial role in asthma. In recent years, stem cell transplantation has been evaluated as a disease therapy. Hematopoietic stem cell transplantation is a life-saving treatment for severe combined immunodeficiency even when an HLA-identical donor is not available [6]. Tan et al. [7] reported that placenta-derived mesenchymal stem cells (MSCs) and methylprednisolone exerted a significant effect on the recovery of neurological function with neuroprotective effects in an animal model. MSCs can undergo proliferation and multiple differentiations, possess strong potential for tissue regeneration, and exert anti-inflammatory and immunomodulatory effects [2,8,9,10,11]. MSCs in bone marrow can differentiate into cells that constitute multiple nonhematopoietic organs [8]. Many studies have examined the use of stem cell therapy in various diseases such as acute lung injury [12], acute pancreatitis [13], and hepatic failure [14]. In allergic rhinitis in adults, bone marrow-derived MSCs and induced pluripotent stem cell-derived MSCs (iPSC-MSCs) significantly suppress Th2 cells, promote regulatory T (Treg) cell responses, and inhibit lymphocyte proliferation in peripheral blood mononuclear cells (PBMCs) [15]. However, Desai et al. [16] reported that MSCs presented allergens to CD4+ T cells, thus causing an increase in the production of inflammatory cytokines and the proliferation of lymphocytes in allergic rhinitis in adults. Nevertheless, no study has focused on the therapeutic effects of MSCs on asthma in children. Intravenous MSCs transplantation in murine asthma models improved the pathological features of asthma, some of which include decreased collagen deposition and inflammatory infiltration around the airway [9,17,18,19], blunt airway hyper-responsiveness [19,20,21], improved pulmonary histological scores [17,22,23], and remodeling prevention [24,25,26]. MSCs and serelaxin exerted a synergistic effect to prevent airway fibrosis in an experimental model of chronic allergic airway disease [27]. In a cat model of asthma, MSC-treated animals exhibited decreased airway inflammation with significantly lower bronchial wall thickening scores and lung attenuation on computed tomography images 8 months after the study [24]. MSC-treated asthmatic cats also exhibited significantly decreased airway inflammation, parenchymal changes, airway hyper-responsiveness, and airway remodeling [25]. Repeated administration of allogeneic adipose-derived MSCs exerted a delayed effect in preventing airway remodeling in asthmatic cats [25].

Conventionally, glucocorticoids and bronchodilators are used for the treatment of asthma. However, some children whose asthma cannot be easily controlled with the use of glucocorticoids may require alternative treatment. Promising therapeutic methods that showed favorable outcomes in animal models of asthma should be converted into clinical practice in humans. However, the exact mechanism of function of placenta-derived MSCs in children remains unclear and requires further evaluation. This study evaluated the effect of placenta-derived MSCs on the activation and proliferation of CD4+ T cells and CD8+ T cells in children with and without asthma. In addition, we evaluated the mechanisms through which MSCs exerted an anti-IL-5 effect and attempted to understand the potential of MSC therapy in children with asthma.

In this study, we enrolled children who had been diagnosed with asthma and children without asthma. Inclusion criteria for the asthma group were based on the Global Initiative for Asthma guidelines [26]. Children who had acute asthma exacerbation and did not use steroids within 1 week before the study were included in the asthma group. Children without asthma were included in the nonasthma group. Children who had parasitic infections or hepatic disorders were excluded. This study was approved by the Institutional Review Board of Taipei Medical University and was conducted in accordance with the Declaration of Helsinki. After obtaining parental written informed consent, we collected a 5-mL sample of peripheral blood and recorded children's age and sex. We enrolled 68 children (28 girls and 40 boys), 45 and 23 of whom were included in the asthma and nonasthma groups, respectively. The sex ratio was 0.67:1 (18 girls and 27 boys) and 0.77:1 (10 girls and 13 boys) in the asthma and nonasthma groups, respectively. At the time of the study, all children were between the ages of 2 and 12 years, with a mean age of 6 years (6.00 ± 0.26). The average ages of children in the asthma and nonasthma groups were 5.88 years (5.88 ± 0.32) and 6.25 years (6.25 ± 0.44), respectively. No statistically significant intergroup age difference was observed (P = 0.50). The demographics of the children are listed in Table 1.

We used density gradient centrifugation (Histopaque; Sigma Aldrich, St. Louis, MO, USA) to isolate PBMCs from heparinized venous blood. Initially, we depleted plasma through centrifugation (400 × g for 20 min). Residual blood cells were mixed with an equal volume of RPMI 1640 medium. Subsequently, Histopaque was added to the bottom of the centrifuge tube. The blood-RPMI 1640 mixture (the volume ratio of cells to Histopaque was 2:1) was slowly layered on the Histopaque solution. Next, the centrifuge tube was centrifuged at 400 × g at 20 °C for 30 min. By using a sterile pipette, we transferred the mononuclear cell layer to a second centrifuge tube. The cells were washed and collected after adding a 2-fold excess of Hanks' Balanced Salt Solution, and then the PBMCs were prepared for cell culture.

We isolated placenta-derived MSCs from the choriodecidual membrane of human placentas [29]. The choriodecidual tissues donated by women who had undergone cesarean sections were digested using SMEM medium supplemented with 0.5 mg/mL protease, 0.5 mg/mL collagenase B, and 1 mg/mL DNase I at 4 °C overnight and filtered through a 100-μm nylon membrane. After centrifugation, cells were collected and subsequently resuspended in culture medium (MCDB201 supplemented with 1% insulin transferrin selenium, 10 ng/mL epidermal growth factor, and 1% penicillin/streptomycin). Next, the cells were plated in culture dishes coated with human collagen type IV. The adherent cells were kept in the culture medium; every 3 or 4 days, the medium was changed and the nonadherent cells were removed. Cells that were demonstrated to be placenta-derived MSCs were cultured in a serum-free medium, which displayed fibroblast-like morphology after attachment with a positive expression for CD29, CD44, CD73, CD90 and negative expression for CD14, CD34, CD45, and HLA-DR. In vitro assays of these cells showed positive signals for adipogenic, chondrogenic, and osteogenic differentiation when stained with Alcian Blue, Alizarin Red S, and Oil Red O, respectively [29].

In vitro culture of PBMCs with or without MSCs

The presence of the surface marker CD25 was detected in cultured cells to evaluate cell activation. These cells were stained with the fluorescent anti-CD25 antibody for 30 min at 4 °C and fixed in 1% paraformaldehyde. In addition, to evaluate cell proliferation, cells were stained with 5-µM carboxyfluorescein succinimidyl ester (CFSE) in phosphate-buffered saline (PBS) at room temperature for 5 min and then washed with 10 volumes of media with 10% PBS for 5 min before culturing. After culturing, all cells were examined for the presence of surface antigens by using flow cytometry. 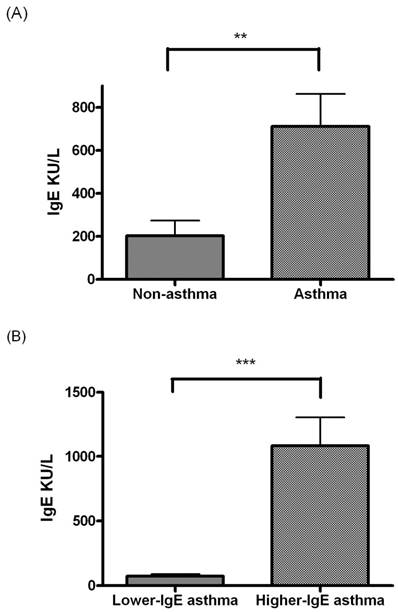 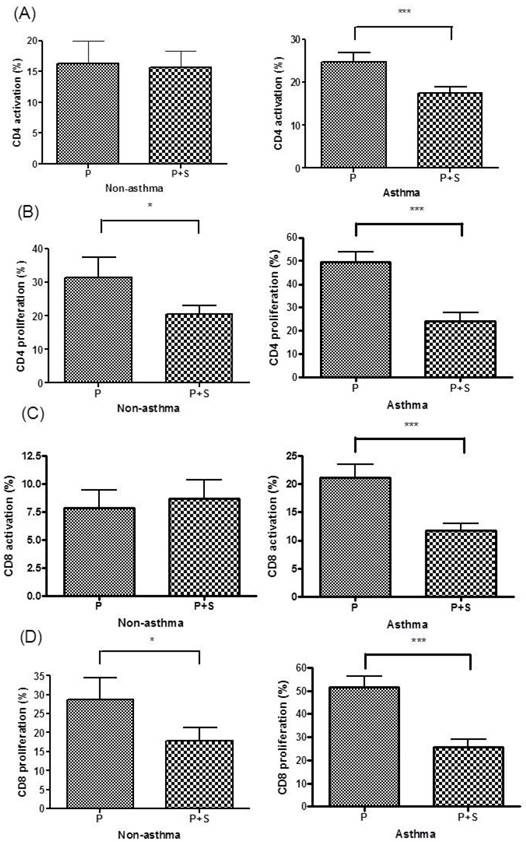 Clinical severity in children with asthma 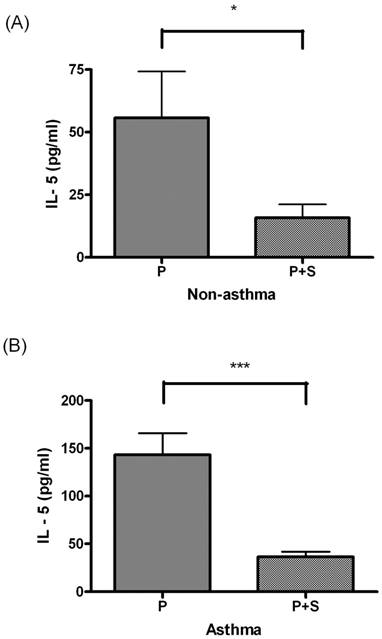 Several studies have examined the mechanisms of MSCs in animal models, but none have focused on children with asthma. In murine models of asthma, MSCs were shown to be immunomodulatory and normalize the balance of type 1 T helper (Th1) cells and Th2 cells [19,21,23]. The administration of MSCs in the murine models of asthma changes the phenotype of T lymphocytes from Th2 to Th1 cells [18,21]. MSC therapy reduced airway eosinophilia in rodent models, regardless of the source of MSCs or the method of administration [17,18,19,22,24]. Notably, the percentage of eosinophils was observed to decrease to its normal level several months after MSC treatment in cat models [25].

Murine studies have reported reductions in inflammatory cells and inflammatory mediators, such as tumor necrosis factor-α and IL-6, in both bronchoalveolar lavage fluid and serum after MSC transplantation [9]. MSCs may also promote immune tolerance through the proliferation of Treg cells and the secretion of regulatory cytokines such as IL-10 in asthmatic mice [19,23]. Transforming growth factor-beta (TGF-β) is a type of cytokine that causes airway inflammation and airway remodeling [30,31], and MSCs can suppress TGF-β by inhibiting alveolar macrophage polarization through the TGF-β signaling pathway [32]. The overexpression of p-Akt was suppressed in the lung tissues of asthmatic rats after MSC transplantation [9]. MSCs can prevent inflammatory infiltration around the airway deposition of collagen and airway remodeling in a rat model of chronic asthma by disrupting the PI3K/AKT signaling pathway [9]. In a small number of adult patients with allergy-induced asthma, MSCs significantly reduced the interferon-γ level and increased the IL-10 level [33].

Nonetheless, our study was performed on a small number of children and only focused on IL-5. Despite this limitation, the results revealed significant differences after MSC coculture. We will conduct further studies in the future to evaluate a range of Th2-associated cytokines (e.g., IL-4 and IL-13) and also test current concepts regarding the addition of MSCs with different T cell subsets, such as Th9 (e.g., IL-9), and regulatory T cells (e.g., IL-10, TGFβ, and FoxP3). Our study observed that placenta-derived MSCs undoubtedly exerted an anti-IL-5 effect in culture, and can therefore be considered a potential treatment for asthma.

This work was supported by Taipei Medical University (TMU106-AE1-B01).