The organ preservation paradigm has changed following the development of new ways to preserve organs. The use of machine perfusion to preserve organs appears to have several advantages compared with conventional static cold storage. For liver transplants, the temperature control provided by machine perfusion improves organ preservation. In this experimental study, we measured the effects of different temperatures on mitochondrial bioenergetics during the reperfusion phase. An experimental model of ex-vivo liver transplantation was developed in Wistar rats (Rattus norvegicus). After total hepatectomy, cold static preservation occurred at 4ºC and reperfusion was performed at 37ºC and 32ºC using a Langendorff system. We measured parameters associated with mitochondrial bioenergetics in the livers. Compared with the livers that underwent normothermic reperfusion, mild hypothermia during reperfusion caused significant increases in the mitochondrial membrane potential, the adenosine triphosphate content, and mitochondrial respiration, and a significant reduction in the lag phase (all P < 0.001). Mild hypothermia during reperfusion reduced the effect of ischemia-reperfusion injury on mitochondrial activity in liver tissue and promoted an increase in bioenergetic availability compared with normothermic reperfusion.

The lack of available organs is the principal limitation associated with liver transplantation. To increase the quantity of donor organs, marginal organs have been used, including those from elderly donors and patients with hepatic steatosis, those that have experienced prolonged cold ischemia, and those obtained after cardiac death [1, 2]. The use of these poor-quality organs affects the clinical outcomes of liver transplantation, which has led to the development of new ways to preserve organs [3, 4]. Ex-vivo machine perfusion of the liver is an alternative to conventional static cold storage, but there is no agreement about the most beneficial temperature [5, 6]. Another issue that requires resolution is whether or not these liver preservation methods can be combined [7].

The process of cold and warm ischemia followed by a reperfusion period is specific to liver transplantation, and is the primary cause of cellular damage [11]. Ischemia-reperfusion (I/R) injury compromises mitochondrial function and bioenergetics, particularly during reperfusion when the readmission of oxygen increases the production of reactive oxygen species [12, 13]. We aimed to investigate mitochondrial function and cellular bioenergetics at different temperatures in an experimental model of ex-vivo liver transplantation, with a particular focus on the reperfusion phase.

The materials and methods used in this study have been described in detail previously [13].

Twelve-week-old male Wistar rats (Rattus norvegicus) weighing 320-350 g were purchased from Charles River (Charles River, Lyon, France). Upon arrival, the animals acclimatized for 1 week, and they were housed in an environment comprising controlled temperature and humidity and 12-h light-dark cycles, and given unlimited access to standard rodent food and acidified water. The study's protocol was approved by the Animal Ethics Committee at the University of Coimbra's Faculty of Medicine (ORBEA 150 2016/04112016, April 11, 2016). All of the studies were conducted in accordance with the principles and procedures in the EU (1986/609/EEC and 2010/63/EU), Federation of European Laboratory Animal Science Associations, and Animal Research: Reporting of In Vivo Experiments (ARRIVE) guidelines, and they were approved by the Animal Care Committee at the Center for Neurosciences and Cell Biology, University of Coimbra. We also applied the principles of the ARRIVE guidelines to data management and interpretation, and we minimized the number of animals used and their suffering.

Except when noted, all of the chemicals and reagents were purchased from Sigma-Aldrich Corporation (St. Louis, MO, USA). All of the reagents and chemicals used were of the highest commercially available purity.

The surgical procedures were performed under anesthesia induced by ketamine (50 mg/kg) and chlorpromazine (50 mg/kg), provided by the same operator. A median laparotomy was performed, and the liver was mobilized by dividing the hepatic ligaments. The experimental model of ex-vivo liver transplantation comprised the introduction of a cannula into the portal vein and hepatic perfusion with an organ preservation solution (Celsior®) at 4ºC for 10 min. Then, we performed a total hepatectomy while keeping the cannula inside the portal vein. Adequate inflows and outflows were confirmed. Cold static preservation at 4ºC was performed over 12 h. Reperfusion was performed using a Langendorff system at 32ºC or 37ºC for 1 h with a mixture comprising 50% Plasma-Lyte 148 and 50% Krebs solution at pH 7.2 that was supplemented with oxygen by a pressurized membrane oxygenator (pO2, 400-500 mm Hg) [14] (Fig. 1).

Schematic representation of reperfusion under hypothermic and normothermic conditions. Biopsies were taken at the end of the reperfusion time (A). The control group is not represented. Ten animals were analyzed per group. 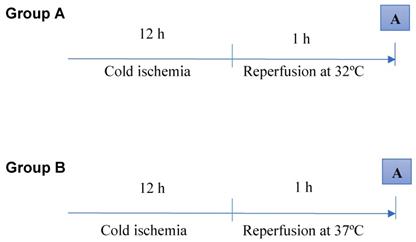 The mitochondria were isolated in a homogenization medium comprising 250 mM sucrose, 10 mM 4-(2-hydroxyethyl)-1-piperazineethanesulfonic acid (HEPES) (pH 7.4), 0.5 mM ethylene glycol-bis(β-aminoethyl ether)-N,N,N′,N′-tetraacetic acid (EGTA), and 0.1% fat-free bovine serum albumin (BSA) [15, 16]. After homogenization of the minced blood-free hepatic tissue, the homogenates were centrifuged at 800 g for 10 min at 4°C. The supernatants were spun at 10 000 g for 10 min at 4°C to pellet the mitochondria that were then resuspended in a final washing medium from which EGTA and BSA were omitted, and it was adjusted to pH 7.4. The protein content was determined using the biuret method calibrated with BSA.

The mitochondrial membrane potential was estimated using an ion-selective electrode to measure the distribution of tetraphenylphosphonium (TPP+). The voltage response of the TPP+ electrode to log (TPP+) was linear with a slope of 59 ± 1, and it conformed to the Nernst equation. The mitochondria (1 mg) were suspended in standard medium (1 mL), comprising 130 mM sucrose, 50 mM potassium chloride, 5 mM magnesium chloride, 5 mM monopotassium phosphate, 50 mM EDTA, 5 mM HEPES (pH 7.4), and 2 µM rotenone, supplemented with 3 µL TPP+. A matrix volume of 1.1 µL/mg protein was assumed. The reactions were carried out at 25°C in a temperature-controlled chamber surrounded by a water jacket with magnetic stirring. The membrane potential (mV), depolarization (mV), lag phase (s), and repolarization (mV) were measured, and the readings were recorded in triplicate.

The oxygen consumption of the isolated mitochondria was determined using a Clark-type polarographic oxygen electrode (Oxygraph; Hansatech Instruments Ltd., King's Lynn, Norfolk, United Kingdom) [17]. Mitochondria (1 mg) were suspended in the standard medium (1.4 mL) with constant stirring at 25°C, as described previously. The mitochondria were energized with succinate (5 mM) and state 3 respiration was induced by adding adenosine diphosphate (ADP) (200 nmol). Oxygen consumption was also measured in the presence of 1 µM carbonyl cyanide-p-trifluoromethoxyphenylhydrazone. State 3 respiration and the respiratory control ratio were calculated according to Chance and Williams [18].

The continuous variables are presented as the means and standard errors of the means, unless otherwise specified. The normality of the data distributions was confirmed using the Kolmogorov-Smirnov and Shapiro-Wilk tests when indicated. Between-group comparisons were performed using Student's t-test, and differences among three or more groups were analyzed using a one-way analysis of variance for post hoc multiple comparisons. The statistical analyses were performed using IBM®SPSS® software, version 22.0 (IBM Corporation, Armonk, NY, USA). A value of P < 0.05 was considered statistically significant.

Reperfusion under hypothermic conditions was performed to evaluate its effects on mitochondrial function and bioenergetics. In this study, the cold ischemia (12 h) and reperfusion (1 h) times were maintained. Reperfusion occurred at 32°C in group A and at 37°C in group B. 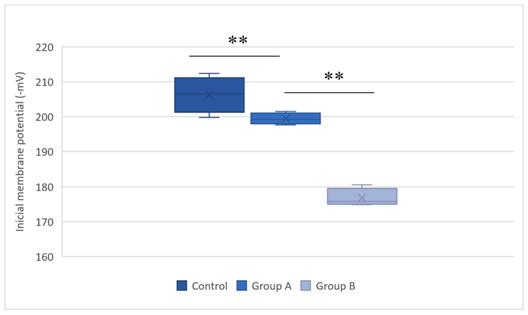 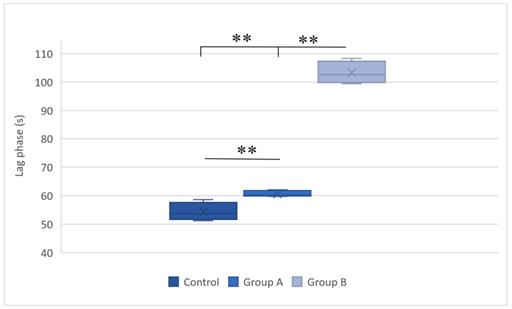 The mitochondrial respiration measurements evaluated oxygen consumption after respiration was induced with succinate. Figures 4 and 5 summarize the results. 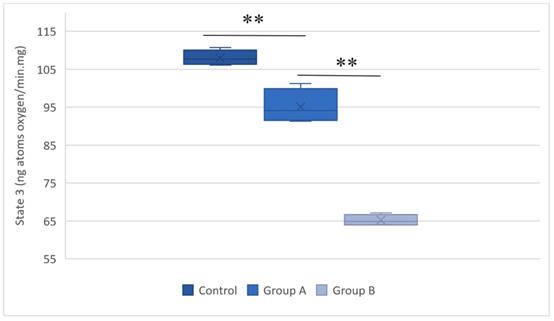 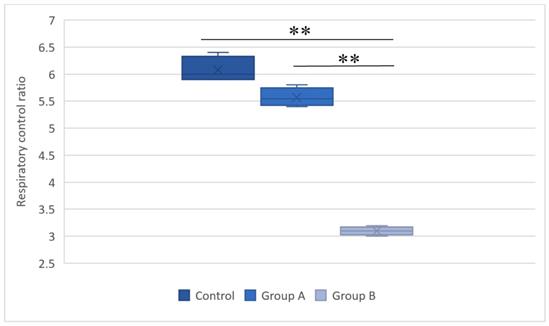 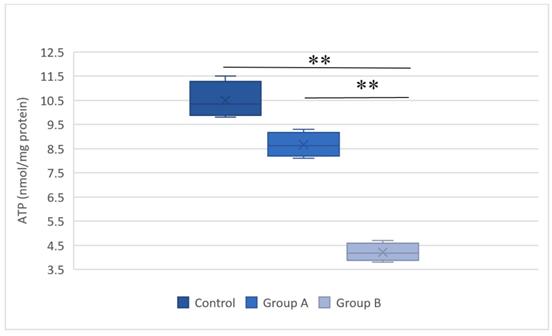 Hematoxylin and eosin (H&E)-stained sections of hepatic tissue from the hypothermic reperfusion group. The hepatic sinusoids do not show endothelial injury, and the hepatocytes contained normal intracellular organelles and nuclei, with no signs of apoptotic or necrosis (A: H&E 40×; B: H&E 400×).

Hematoxylin and eosin (H&E)-stained sections of hepatic tissue from the normothermic reperfusion group. The hepatic parenchyma architecture is preserved without lesions. There is moderate-to-severe disassociation of the hepatocytes. The hepatocytes contain normal nuclei and organelles, with no signs of necrosis or apoptosis (A: H&E 40×; B: H&E 400×).

Animal models of hepatic transplantation are fundamental tools that have enhanced our understanding of the biological and immunological mechanisms involved in transplantation, and, thus, they have helped to answer some clinically relevant questions.

The mouse is the most commonly used animal, and several mouse models have been developed [20]. In 1973, Lee et al. reported the first orthotopic liver transplantation in the rat, which consisted of performing an extracorporeal shunt between the portal and jugular vein at the recipient and posterior anastomosis of the implant to the hepatic vein, the portal vein and the recipient's aorta [21]. This very complex technique was abandoned, and 18 years later, following the development of vascular microsurgery techniques, Qian et al. developed a complex animal model of orthotopic liver transplantation. However, the investigations based on this model are very limited, because it requires a high level of microsurgical expertise and specific technical conditions. In addition, the high mortality rate caused by disruptions to hepatocellular function has limited the use of this animal model [22, 23].

Oscar Langendorff evaluated physiological and pathophysiological events within ex-vivo heart tissue, and, consequently, other animal models were developed that enabled ex-vivo evaluations of the liver, with an emphasis on I/R studies [24-26]. Previous ex-vivo liver transplantation studies are invaluable, because they have paved the way for the physiological and pathophysiological studies that are essential for the development of new ways to preserve the liver using dynamic preservation machines. These studies contribute to the development of dynamic preservation has altered the ways in which organs are perfused, preserved, and transported [5, 8, 27-30].

Functional evaluations of mitochondrial activity in rodents have demonstrated that, like human beings, I/R clearly affects mitochondrial function, which has implications for bioenergetics, and translates into lower energy production efficiency [32, 33]. This ATP deficiency is sufficient to trigger changes in cellular metabolism; therefore, I/R injury in liver transplants interferes with the cellular bioenergetic balance.

Bigelow et al. introduced the concept of hypothermia to clinical practice in the early 1950s, and they demonstrated its neuroprotective effect during cardiac surgery [34]. The benefits of hypothermia include the preservation of hepatic metabolism, and reductions in the inflammatory response and apoptosis during ischemia [35]. Recent experimental studies have shown that mild hypothermia at 32-34°C exerts a protective effect against warm I/R injury, but the mechanisms underlying this effect remain unclear [36]. Azoulay et al. studied patients who underwent complex liver surgery as a consequence of central hepatic tumors involving the inferior vena cava or the confluence of the hepatic veins with the vena cava, and they demonstrated the protective effect of hypothermic in-situ hepatic perfusion compared with total vascular exclusion for >60 min. This study's findings showed that patients who underwent hypothermic perfusion had a better I/R-induced injury tolerance, which translated into improved postoperative liver and kidney function and reduced morbidity [37].

One of the main limitations regarding the use of hypothermia in clinical practice is the potential for coagulopathy. This seems to be associated with platelet dysfunction and damage to the enzymes in the coagulation cascade [40]. The risk of bleeding and the subsequent need for transfusions increase by approximately 20% for each degree Celsius decline in the core temperature. Hypothermia reduces the metabolic rate by 8% for each degree Celsius decline [41], which, for this study, would imply a 34% reduction in metabolic activity. In humans, the only clinical applications of hypothermia that have led to improved outcomes are extra-hospital cardiac arrest and neonatal asphyxia [42, 43]. To integrate the concept of hypothermic reperfusion into clinical practice and apply it to hepatic transplantation, further functional and technical studies will be necessary.

2. Flores A, Asrani SK. The donor risk index: A decade of experience. Liver transplantation: official publication of the American Association for the Study of Liver Diseases and the International Liver Transplantation Society. 2017;23:1216-25

18. Chance B, Williams GR. Respiratory enzymes in oxidative phosphorylation. VI. The effects of adenosine diphosphate on azide-treated mitochondria. The Journal of biological chemistry. 1956;221:477-89