The aim of the present study was to investigate whether the pharmacokinetic profile of orally administered CBZ was altered in rats by concurrent treatments with semi-solid RACOL® and HINE E-gel®, which are semi-solid enteral nutrients marketed in Japan.

CBZ was purchased from Wako Pure Chemical Ind. (Osaka, Japan). Liquid and semi-solid RACOL® and HINE E-gel® were obtained from Otsuka Pharmaceutical Co., Ltd. (Tokyo, Japan). All other reagents were of commercial or analytical grade, requiring no further purification.

Male Sprague-Dawley rats, aged 7 weeks, were obtained from Japan SLC, Inc. (Hamamatsu, Japan). Rats were acclimatized for at least 2 days before being assigned to their experimental groups, and were housed in a clean room maintained at 23 ± 2°C with a relative humidity of 55 ± 10% and 12-h light/dark cycle. They were allowed free access to a regular animal diet and tap water. The left jugular vein of rats was cannulated with polyethylene tubing (Natsume Seisakusyo Co., Ltd., Tokyo, Japan) under anesthesia, and the tube was then externalized to the interscapular area. Rats were fasted overnight following surgery. CBZ was orally administered at a dosage of 75 mg/kg and volume of 2.5 mL/kg. Each semi-solid enteral nutrient at a dosage of 2.5 kcal/kg was orally administered to rats immediately after CBZ dosing. Liquid and semi-solid formulations are both marketed in Japan for RACOL®, and thus liquid RACOL® (2.5 kcal/kg) was orally administered to control rats under the same conditions as the semi-solid preparations. Serial blood samples were obtained from the left jugular vein 2, 5, 15, and 30 min, and 1, 2, 3, and 5 hr after the oral administration of CBZ and were replaced with an equal volume of saline. In order to maintain patency, a small volume of heparinized saline was used to fill the cannula after the collection of each blood sample. Heparinized saline was removed just before the collection of the next blood sample. Collected blood was centrifuged at 3,000 g for 10 min to obtain serum samples. The experimental protocols and animal care methods used in the present study were approved by the Animal Experiment Committee at Osaka Ohtani University.

Fifty microliters of 50 μg/mL phenacetin, an internal standard, 50 μL of 0.1 M sodium hydroxide, and 750 μL of ethyl acetate were added to a 100-μL serum sample. The mixture was then vortexed and centrifuged at 5,000 g for 5 min. The organic layer was decanted into new tubes and evaporated using a centrifugal concentrator for dryness. The residues were resolved in 200 μL of the mobile phase and 50 μL was injected into the HPLC system (Shimadzu, Kyoto, Japan). The mobile phase consisted of 15 mM potassium phosphate buffer (pH 4.0) and acetonitrile (v/v: 66:34), and the flow rate was set at 1.0 mL/min. Absorbance of the eluent was monitored at 220 nm. The value of the area under the curve (AUC0→5h) was calculated by the linear trapezoidal method.

Data were expressed as means ± S.D. Comparisons among groups were made using an analysis of variance (ANOVA) followed by Tukey's test. Differences with a p-value of 0.05 or less were considered to be significant.

Pharmacokinetics of CBZ after its oral administration

Serum concentration-time courses of CBZ after its oral administration to rats. Serum concentrations of CBZ were measured after its oral administration (75 mg/kg). Results are shown as the means ± SD of four rats per group. Open circle: the liquid RACOL® group; Closed circle: the semi-solid RACOL® group; Closed triangle: the HINE E-gel® group. 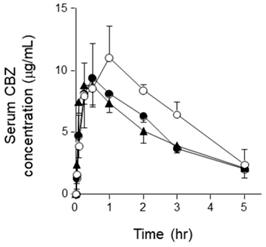 AUC0→5h values of CBZ after its oral administration. The values of AUC0→5h were calculated by the linear trapezoidal method. Results are shown as the means ± SD of four samples per group. *: Significantly different from the mean value of the liquid RACOL® group. 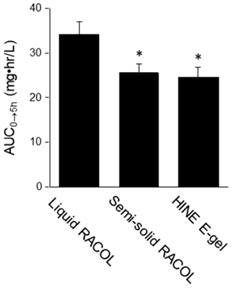 In conclusion, we herein demonstrated using rats that a pharmacokinetic interaction may occur between CBZ and semi-solid enteral nutrients, such as semi-solid RACOL® and HINE E-gel®. Our results will contribute to promoting appropriate nutritional management in pharmacotherapy.