Aims: To determine the extent of DNA methylation of parvalbumin gene (PVALB) promoter in major depressive disorder (MDD) patients with and without suicide attempt in comparison with healthy controls.

Methods: The extracted DNA from dried blood spots of MDD patients (n = 92) including non-suicidal MDD and suicidal-MDD subgroups (n = 45 and n = 47, respectively) and age-matched control subjects (n = 95) was used for DNA methylation analysis at four CpG sites in the promoter sequence of PVALB by pyrosequencing.

Results: The PVALB methylation was significantly increased at CpG2 and decreased at CpG4 in the MDD group compared to the control group, while there was no difference between non-suicidal MDD and suicidal-MDD subgroups. A significant inverse correlation of severity of MDD was indicated only for CpG4.

Conclusion: This study provides the first evidence of abnormalities of PVALB promoter methylation in MDD and its correlation with MDD severity indicating a role for epigenetics in this psychiatric disorder.

Major depressive disorder (MDD) is a severe neuropsychiatric disorder which is a common public health issue for people worldwide. The World Health Organization (WHO) has reported that 300 million people worldwide suffer from MDD [1]. Around 800,000 people die from suicide every year [1]. Several studies have reported that psychiatric disorders, especially MDD, have been strongly linked to suicide [2-6]. Moreover, patients with MDD have an almost 20-fold greater prevalence of suicide attempt than other patients hospitalized with no history of MDD [7].

Recently, the etiology of MDD and suicide remains unclear. Nevertheless, there is strong evidence for neurobiological deficits in the pathophysiology in MDD and suicide. Abnormalities of major neurotransmitter systems (serotonin, catecholamine, γ-aminobutyric acid (GABA) and glutamate) have been widely reported in both MDD patients [8,9] and suicidal subjects [10,11]. Epigenetic mechanisms, which can be modified by environmental factors, may play an important role in MDD pathology by genetic alterations in response to susceptibility or development to diseases [12-14]. DNA methylation is the most widely studied epigenetic factor, for which the main mechanism is an addition of a methyl group at the cytosine 5' position in cytosine-phosphate-guanine dinucleotide (CpG) sites [14,15]. DNA methylation occurring in or near promoter regions influences, and generally represses, gene transcription. Therefore, DNA methylation is a key mechanism that may contribute to the changes in gene expression seen in psychiatric disorders. Chen et al. have recently reviewed the evidence for the involvement of DNA methylation in depression, demonstrating particularly how brain-derived neurotrophic factor (BDNF) and solute carrier family 6 member 4 (SLC6A4) genes are implicated and that changes in methylation in several other genes emerging from whole-genome methylation studies have been reported [13].

GABA is the most important and abundant inhibitory neurotransmitter in the central nervous system. Recently, psychiatric disorders have been linked with abnormalities of GABAergic neurotransmission in schizophrenia, bipolar disorder and MDD. In MDD, there have been multiple reports of altered GABA content in plasma, cerebrospinal fluid (CSF) and brains of depressed patients as well as changes in GABA-related gene and protein expression [9,16-18]. Moreover, altered mRNA GABAA receptor subunit expression was found in postmortem frontal cortex in depressed suicide victims [19]. Postmortem microarray studies in a cohort of suicides reported that GABA-related gene expression was altered in suicides both with and without depression in prefrontal cortex [20], limbic system [21] and also global brain [22]. Moreover, an association of depression with GABA-related genes indicated by differences in gene expression between suicides with and without depression has been reported [20-22]. These findings indicate that GABAergic neurotransmission is likely to be dysregulated in depression and suicide.

GABAergic interneurons can be subdivided into three types based on the expression of the calcium-binding proteins calbindin, calretinin and parvalbumin (PV) [23]. Specific deficits of PV-immunoreactive cells are found in the brain in both schizophrenia and its animal models, and recently an increase of PV gene (PVALB) promoter methylation has been recently reported in hippocampal tissue from both schizophrenia [24] and its sub-chronic phencyclidine rat model [25]. Further evidence implicating PVALB promoter hypermethylation in psychosis comes from the study of methamphetamine-induced psychosis subjects [26]. While frontal cortical PV protein or PVALB expression are not reportedly changed in MDD [27-29], deficits of PVALB expression in anterior cingulate cortex have been observed [30]. Thus, as there are reported changes in genes and proteins related to GABAergic neurotransmission in MDD, the present study hypothesized that DNA methylation of PVALB may be abnormal in this disorder. This study examined DNA methylation within the promoter sequence of PVALB in MDD patients both with and without a history of attempted suicide. Exploration of the relationship between DNA methylation in the PVALB promoter with symptom severity of MDD was a secondary objective of this study.

The subject groups collected for this study comprised 100 unmedicated MDD patients and 100 age- and sex-matched control subjects (18-65 years old). MDD patients were diagnosed by a researcher psychiatrist in Clinical Psychiatry, Maharaj Nakorn Chiang Mai Hospital, Thailand based on criteria in the Diagnostic and Statistical Manual of Mental Disorders, fifth edition (DSM-5). Exclusion criteria for patients included a previous history of schizophrenia, bipolar disorder, or drug abuse. The subjects in the MDD group were divided into two subgroups of non-suicidal MDD and suicidal-MDD groups based on their suicide attempt history determined by the psychiatrist according to the Mini International Neuropsychiatric Interview (M.I.N.I.) (Thai version 5.0.0 - Revised 2007). The 17 Item Hamilton Depression Rating Scale Thai version (HAMD-7) was used for assessing severity of depression. The control subjects completed the Thai Mental Health Indicator (TMHI-66) for evaluation of mental health. Volunteers with previous history of schizophrenia, mood disorder, anxiety, or drug addiction and abnormal mental health were excluded from this study.

The experimental procedures of this study were approved by the Naresuan University Institutional Review Board, Thailand and the Research Ethics Committee, Faculty of Medicine, Chiang Mai University, Thailand. Informed consent forms were obtained from the participants involved.

The PCR reaction included 1x PyroMark PCR Master Mix, 1x CoralLoad Concentrate (only for the reaction of PVALB), 0.2 µM of forward and reverse primers, RNase-free water and 1 ng bisulfite-converted DNA template in 25 µl PCR final volume. The PCR amplification was conducted with initial PCR activation step at 95°C for 15 min, 45 cycles of denaturation at 94°C for 30 s, annealing at 56°C (for PVALB) / 50°C (for LINE-1) for 30 s and extension at 72°C for 30 s, and final extension step at 72°C for 10 min. A quality of PCR product was checked by agarose gel analysis with ethidium staining prior to Pyrosequencing analysis (Figure 2A-2B). Then, ten microliter of PCR product was immobilized with Streptavidin SepharoseTM High Performance (GE Healthcare) and purified using the PyroMark Q24 Vacuum workstation following the manufacturer's instructions (QIAGEN). The samples then underwent pyrosequencing to determine methylation using the PyroMark Q24 system according to the instructions from the manufacturer (QIAGEN). The percentage methylation at each CpG site in a pyrogram was calculated by Pyromark® Q24 2.0.6.20 software (QIAGEN). All results which were labelled as “check” or “failed” were repeated from the PCR amplification step. All samples that failed to provide reliable results after replication were rejected. 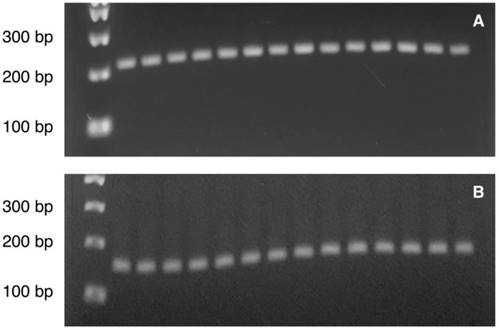 Comparison of DNA methylation (%) of the four consecutive CpG sites in PVALB promoter between control and MDD groups. Scatter dot plots of each groups are horizontally lined with the median value. * p < 0.05. MDD: Major depressive disorder. 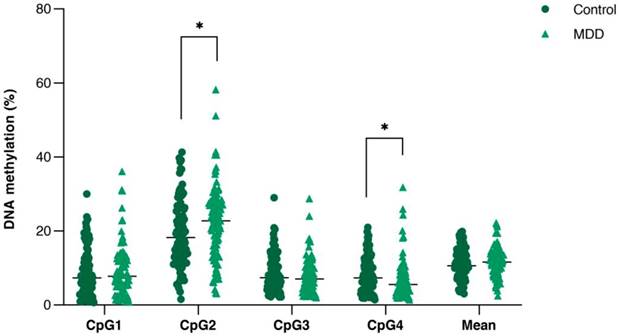 Demographic data and clinical characteristics of control and MDD groups, and non-suicidal MDD and suicidal-MDD subgroups.

Data are represented as mean ± SD or number (n).

Comparison of DNA methylation (%) of the four consecutive CpG sites in PVALB promoter between non-suicidal MDD and suicidal-MDD groups. Scatter dot plots of each groups are horizontally lined with the median value. MDD: Major depressive disorder. 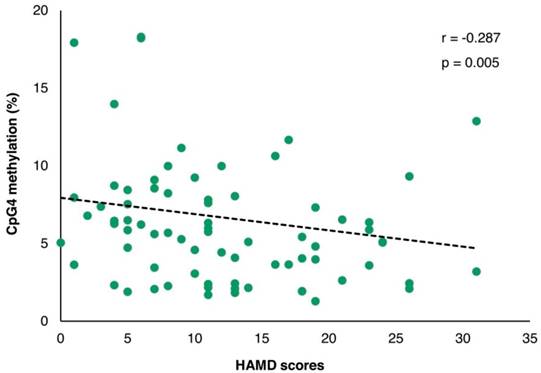 The present study has assessed DNA methylation at the same CpG sites of the PVALB promoter as previous studies in humans [24,26], and (for CpG2) the equivalent sequence in rats [25]. Interestingly, the finding of elevated DNA methylation at CpG2 was also previously observed associated with schizophrenia [24] and methamphetamine dependence, especially methamphetamine-induced psychosis [26], in humans, and at the equivalent site in brain tissue from rats receiving phencyclidine [25]. While the previous consistent findings indicate that hypermethylation of PVALB at CpG2 might be generally associated with psychotic illness and animal model of schizophrenia, these results suggest that this epigenetic change may extend to other psychiatric disorders, in this case MDD.

The decrease in methylation at CpG4 associated with MDD is in contrast to the increase at this site in post-mortem hippocampus in schizophrenia subjects [24], while no significant difference was identified in methamphetamine-induced psychosis subjects [26]. The validity of this finding is supported by the highly significant inverse correlation of CpG4 methylation with the severity of depression indicated by HAMD-17 scores, an independent effect of age or sex. Reanalysis of the data excluding outlying subjects gave essentially the same result (data not shown).

However, the direct relationship between DNA methylation and gene expression of PVALB is unknown, although the findings described above in schizophrenia and its animal model show both increased methylation and reduced expression of PVALB. In contrast, previous studies in postmortem brain in MDD have demonstrated no changes of PVALB gene expression or neuronal immunoreactivity in most brain regions studied [27-29,33], other than the anterior cingulate [30]. These findings imply that the PVALB methylation profiles might influence the pathology of MDD in specific brain regions. To support this hypothesis, hypermethylation of the PVALB promoter has been identified specifically in only hippocampus, but not prefrontal cortex, in schizophrenia [24].

One important but inevitable limitation of this study is that the PVALB promoter methylation was determined in DNA derived from peripheral blood samples. While studies in post-mortem tissue from psychiatric patients have been undertaken [24], DNA methylation is most often investigated in blood samples, while there is evidence from previous studies of concordant changes in methylation between blood and brain [36]. We have also observed increased PVALB methylation in blood samples similar to reported changes in brain tissue in schizophrenia (Reynolds et al., unpublished data). There have been other findings of DNA methylation from blood samples of patients with MDD. Changes in methylation profiles of specific genes such as zinc finger and BTB domain containing 20 (ZBTBT20) [37], BDNF [38-42] and nuclear receptor subfamily 3, group C, member 1 (NR3C1) [43] have been reported. We do not know the direction of causality in these findings, i.e. whether the changes in PVALB methylation are a contributor to, or a consequence of, MDD and, for CpG4, depressive symptom severity. While some of these findings may also be confounded by drug treatment, we can exclude this influence this influence in the current study using unmedicated subjects.

We are very grateful to all subjects for participation, the staff of Clinical Psychiatry, Maharaj Nakorn Chiang Mai Hospital, Thailand and the graduate students of Department of Anatomy, Faculty of Medical Science, Naresuan University, Thailand, for data and blood collections as well as Biomolecular Sciences Research Centre, Sheffield Hallam University, UK for facility support. This work was financially supported by the Naresuan University Research Fund and the funding from commission higher education by Naresuan University, and partially supported by Chiang Mai University. B Thaweethee-Sukjai was financially supported the Thailand Research Fund through the Royal Golden Jubilee Ph.D Program (Grant No. PHD/0297/2552) and the British Council through the Newton Fund: PhD Placement grant for scholars 2015/16.

20. Klempan TA, Sequeira A, Canetti L. et al. Altered expression of genes involved in ATP biosynthesis and GABAergic neurotransmission in the ventral prefrontal cortex of suicides with and without major depression. Mol. Psychiatry. 2009;14:175-89

21. Sequeira A, Klempan T, Canetti L. et al. Patterns of gene expression in the limbic system of suicides with and without major depression. Mol. Psychiatry. 2007;12:640-55

33. Zhang ZJ, Reynolds GP. A selective decrease in the relative density of parvalbumin-immunoreactive neurons in the hippocampus in schizophrenia. Schizophr. Res. 2002;55:1-10