Introduction: Macrolides, linezolid, imipenem-cilastatin, fluoroquinolones, penicillin combinations, and ceftriaxone are known to be associated with Torsades de pointes/QT prolongation (TdP/QTP). Other antibiotics may also lead to TdP/QTP, but no study has systemically compared TdP/QTP associations for many available antibiotics.

Objectives: The objective of this study was to evaluate the association between TdP/QTP and many available antibiotics using the FDA Adverse Event Report System (FAERS).

Methods: FAERS reports from January 1, 2015 to December 31, 2017 were analyzed. The Medical Dictionary for Regulatory Activities (MedDRA) was used to identify TdP/QTP cases. We calculated the Reporting Odds Ratios (RORs) and corresponding 95% confidence intervals (95%CI) for the association between antibiotics and TdP/QTP. An association was considered to be statistically significant when the lower limit of the 95%CI was greater than 1.0.

Conclusion: This study confirms prior evidence for TdP/QTP associations with macrolides, linezolid, imipenem-cilastatin, fluoroquinolones, penicillin combinations, and ceftriaxone. This study also identifies a new association between amikacin and TdP/QTP.

Drug-induced QT interval prolongation (QTP) is able to cause Torsades de pointes (TdP), a potentially fatal ventricular arrhythmia [1]. The risk of TdP/QTP must be considered when selecting antibiotic therapy. In 2010, a study evaluated the risks of TdP with antibiotics using the United States FDA Adverse Event Reporting System (FAERS) and identified macrolides, fluoroquinolones, and linezolid as TdP agents [2]. Macrolides and fluoroquinolones are known to cause QTP via blockade of the rapidly activating delayed rectifier potassium channel (hERG/IKr channel) [3-7]. Linezolid has been associated with TdP [2]; however, a double-blind placebo-controlled four-way crossover study with 40 healthy subjects found that linezolid had no effect on the QT interval itself [8]. An observational cohort study of 1,270 patients indicated that beta-lactamase inhibitors were associated with QTP [9]. Ceftriaxone, when used with lansoprazole, was significantly associated with QTP in a study of FAERS and electronic health records [10]. A case report stated that imipenem-cilastatin and piperacillin-tazobactam caused hypokalemia leading to TdP in a patient [11].

In this study, we investigated FAERS to analyze the association between TdP/QTP and common antibiotic agents, including macrolides, fluoroquinolones, oxazolidinones, penicillins, carbapenems, cephalosporins, aminoglycosides, metronidazole, and glycopeptide antibiotics.

FAERS is a publicly available database, which is composed of adverse event reports that were submitted to United States Food and Drug Administration (FDA) [12]. FAERS data contain drug information (drug name, active ingredient, route of administration, the drug's reported role in the event) and reaction information. Each report has a primary suspected drug with one or more adverse drug reactions (ADR) and may include other drugs taken by the patient.

Each antibiotic was identified in FAERS by generic and brand names listed in the Drugs@FDA Database [13]. Drugs with a reported role coded as “PS” (Primary Suspect Drug) or “SS” (Secondary Suspect Drug) were evaluated for inclusion [14]. Antibiotics with less than three TdP/QTP reports were excluded from data analysis [15].

A disproportionality analysis was conducted by computing Reporting Odds Ratios (ROR) and corresponding 95% confidence intervals (95%CI) for the association between TdP/QTP and each antibiotic class or individual antibiotic [17]. ROR was calculated as the ratio of the odds of reporting TdP/QTP versus all other ADRs for a given drug, compared with these reporting odds for all other drugs present in FAERS [17]. An association was considered to be statistically significant if the lower limit of 95%CI was above 1.0 [17]. An adjusted ROR was calculated after removing reports of potentially confounding antiarrhythmic drugs from the data analysis. These drugs include amiodarone, azimilide, disopyramide, dofetilide, flecainide, ibutilide, mexiletine, propafenone, propranolol, quinidine, and sotalol. Data analysis was performed using Microsoft Access 2016, Microsoft Excel 2016 (Microsoft Corporation, Redmond, WA), and JMP Pro 13.2.1 (SAS Institute, Cary, NC).

After applying inclusion and exclusion criteria and removing duplicate reports, FAERS contained 2,042,801 reports from January 1, 2015 to December 31, 2017. There were 3,960 TdP/QTP reports from the study period, which were included in the data analysis. Females accounted for 60% of TdP/QTP reports. TdP/QTP patients had a median age (IQR, interquartile range) of 55 (34) years.

Amikacin was associated with a total of seven TdP/QTP reports. In these reports, amikacin was the secondary suspect drug of TdP/QTP, while the primary suspect drugs were bedaquiline, clofazimine, linezolid, and ciprofloxacin.

Piperacillin-tazobactam was associated with a total of seventeen TdP/QTP reports. In these reports, three reports had Clostridium difficile colitis and seven reports had electrolyte abnormalities. 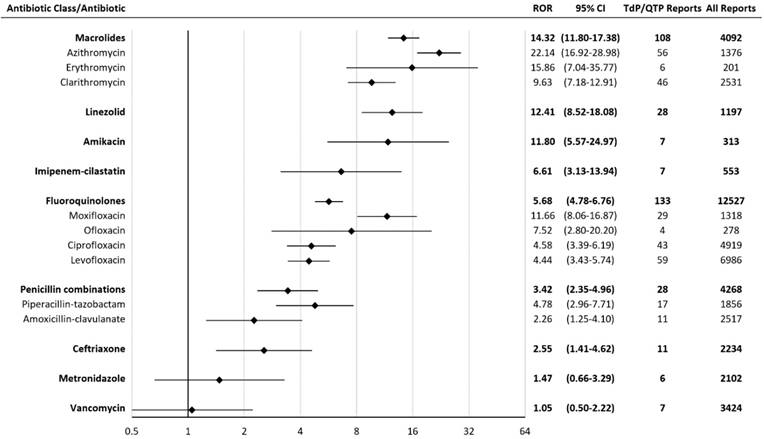 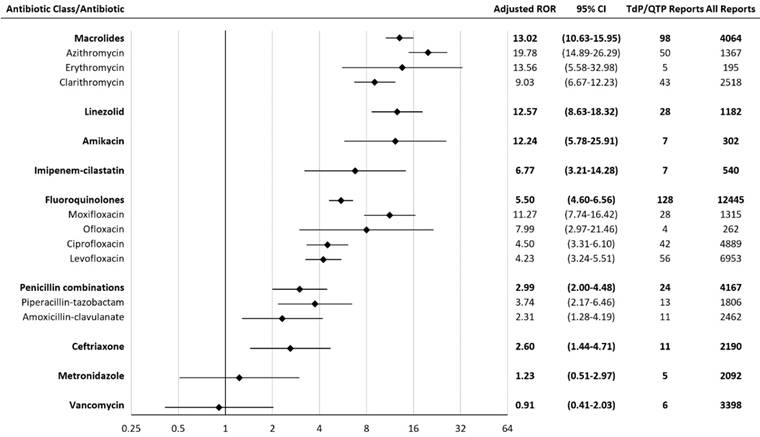 Our study found a significantly higher ROR for TdP/QTP as compared to all other adverse events for these antibiotics, which were (ROR from highest to lowest) azithromycin, erythromycin, linezolid, amikacin, moxifloxacin, clarithromycin, ofloxacin, imipenem-cilastatin, piperacillin-tazobactam, ciprofloxacin, levofloxacin, ceftriaxone, and amoxicillin-clavulanate. An FAERS study published in 2010 indicated significant TdP associations (from strongest to weakest) with moxifloxacin, levofloxacin, erythromycin, ciprofloxacin, gatifloxacin, clarithromycin, azithromycin, and linezolid [2]. Both studies showed TdP associations with macrolides, fluoroquinolones, and linezolid. The 2010 FAERS study only included TdP in their data analysis while our study included not only TdP but also QTP. Since QTP is a precursor of TdP, including QTP increases sensitivity of signal detection. The 2010 FAERS study included drugs administered through all routes, including topical routes, which may have limited systemic absorption and are less likely to cause TdP. Our study only included drugs administered in oral, subcutaneous, intramuscular, intravenous, and parenteral routes and excluded other routes of administration, such as topical routes. Therefore, TdP/QTP events in our study are more likely to be caused by a drug than those in the 2010 FAERS study [2].

Our study confirmed previously known TdP/QTP associations with macrolides, linezolid, imipenem-cilastatin, fluoroquinolones, penicillin combinations, and ceftriaxone [2,9-11]. Penicillin combinations have a high incidence of diarrhea, and diarrhea may lead to electrolyte abnormalities, which are significant risk factors for TdP/QTP. In our study, out of seventeen piperacillin-tazobactam TdP/QTP reports, three reports had Clostridium difficile colitis and seven reports had electrolyte abnormalities. Amikacin was found to be associated with TdP/QTP in our study, which was not reported in the literature. However, amikacin was the secondary suspect drug in all TdP/QTP reports, while the primary suspect drugs were known to be associated with TdP/QTP. Amikacin might play a role in TdP/QTP but the causal relationship is not warranted.

A causal relationship between a drug and an ADR cannot be determined by FAERS. Significant bias may occur because of the spontaneous and voluntary reporting of ADRs. Media attention for a particular ADR might affect the reporting behaviors. The association between a drug and an ADR is confounded by comorbid diseases and concomitant drugs. For example, concomitant QT-prolonging drugs, such as ondansetron, antidepressants, antipsychotics, methadone, arsenic, and azole antifungals, are confounders when studying the associations between TdP/QTP and antibiotics. Diarrhea is also a potential confounder because diarrhea may lead to electrolyte abnormalities, which may cause TdP/QTP. Antibiotics, such as penicillin combinations and fluoroquinolones, cause diarrhea in many patients. The higher TdP/QTP ROR for penicillin combinations might be due to their ability of causing diarrhea. The higher TdP/QTP ROR for fluoroquinolones might be due to a combination of their ability of causing diarrhea and their blockade of hERG/IKr channel.

This study confirms prior evidence for significant TdP/QTP associations with macrolides, linezolid, imipenem-cilastatin, fluoroquinolones, penicillin combinations, and ceftriaxone. This study also discovers a new association between amikacin and TdP/QTP. Results obtained from FAERS should be interpreted with caution in the context of data limitations. Antibiotic stewardship is needed to prevent TdP/QTP and to improve health outcomes.

No funding was sought for this research study. Dr. Frei was supported, in part, by a NIH Clinical and Translational Science Award (National Center for Advancing Translational Sciences, UL1 TR001120, UL1 TR002645, and TL1 TR002647) while the study was being conducted. The funding sources had no role in the design and conduct of the study; collection, management, analysis, and interpretation of the data; preparation, review, or approval of the manuscript; and decision to submit the manuscript for publication. The views expressed in this article are those of the authors and do not necessarily represent the views of the Department of Veterans Affairs, the National Institutes of Health, or the authors' affiliated institutions.