Suppressive Effects of Aspirin for Postthoracotomy Pleural Adhesion in Rats

Background: Postoperative adhesion is one of major concerns at re-thoracotomy. Aspirin has both the anti-platelet and anti-inflammatory effects, and decreases several cytokines production.

Objective: We investigated that aspirin could reduce postoperative adhesion formation in a rat model.

Conclusions: Aspirin could reduce postoperative pleural adhesion by inhibiting the expression of PDGF.

Pleural adhesions, which are often caused by a prior thoracotomy, can make identification of anatomical structures complicated at re-thoracotomy. Re-thoracotomy in a patient with pleural adhesions has several risks of blood loss, pleural injury, and prolonged operative times, and also increases the risk of postoperative complications [1]. Recent reports have shown that surgical resection for metachronous second primary lung cancers improve prognosis [2, 3]. Repeat metastasectomy is also recommended to improve the survival in patients with metachronous pulmonary metastasis from colorectal carcinoma [4]. Patients who underwent prior pulmonary resections showed evidence of adhesions during 54% of video-assisted thoracoscopic surgery (VATS) and 100% of thoracotomies [5]. As such, we sometimes have opportunities to perform pulmonary resections at the time of re-thoracotomy. However, the method for preventing pleural adhesions after thoracotomy remains unclear.

Some anti-adhesion materials are reportedly used in the field of thoracic surgery [6-8]. Previous reports have shown that non-steroidal anti-inflammatory drugs (NSAIDs) or corticosteroids reduced adhesion formation because of their anti-inflammation effects [9-11]. Aspirin, another NSAIDs, may reduce adhesions by inhibiting platelet activation through cyclooxygenase (COX) blockade. Platelets release several inflammatory cytokines and activate inflammatory cells, such as neutrophils and macrophages at the sites of injury [12]. These effects are known to play an important role in wound healing. Postoperative adhesions are formed by a local inflammatory response as part of the wound healing process [13]. We hypothesised that aspirin could reduce post-thoracotomy adhesion formation by inhibiting platelet activation.

The purposes of this study were to examine whether daily oral administration of aspirin could reduce the pleural adhesions caused by thoracotomy and to investigate how aspirin affect the histological changes that occur during the period of pleural adhesion formation.

All animal experiments were conducted with the approval of, and in accordance with the guidelines of the Committee for Animal Research at Kyoto Prefectural University of Medicine (approval number: M27-435, M28-435).

Animals were randomly divided into two groups after the first operation, the aspirin group (n=8) and the control group (n=8). Aspirin was suspended in a 0.3% carboxymethylcellulose solution. The aspirin solution was adjusted to a concentration of 16.5 mg/ml. 2ml of the aspirin solution (100 mg/kg/day) was administrated orally to rats in the aspirin group, and the same volume of distilled water was administered to rats in the control group. The animals underwent re-thoracotomy, and the adhesion lengths were evaluated 14 days after the initial operation (Fig 1A).

Experimental design: (A) Sprague-Dawley rats underwent thoracotomy and cauterisation to the visceral pleura to induce adhesion. They were randomly allocated to the aspirin group (n=8) or the control group (n=8), and received aspirin or distilled water, respectively. After 14 days, re-thoracotomy was performed, and the adhesion length was measured. (B) Animals underwent the same surgical procedure to cause adhesion and were administered with aspirin or distilled water, respectively (n=12, each group). On days 1, 3, 7 and 14 after the procedure, the samples (n=3, each day) were extracted, and were analysed for histological examination. 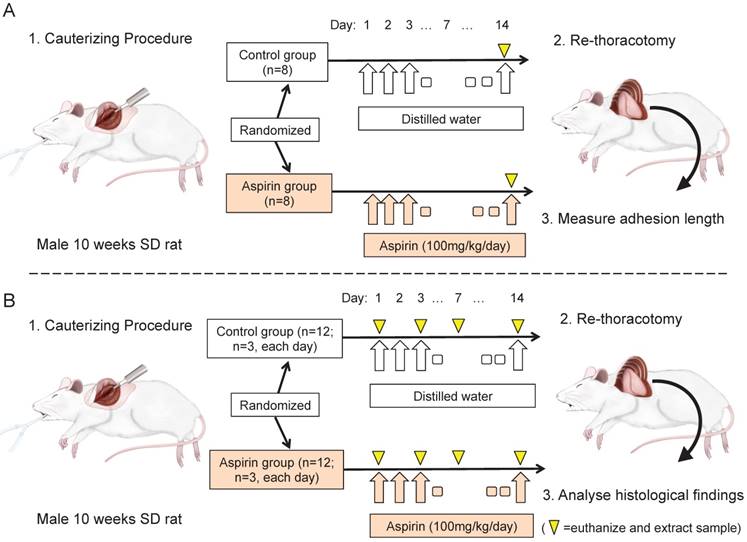 Another series of the experiment was performed to histological examination of the adhesion formation sequentially. Rats were undergone the same surgical procedure to make adhesions and was administered aspirin or distilled water (n=12, each group). The animals were euthanized by the administration of pentobarbital and the chest wall samples were extracted on days 1, 3, 7, and 14 (n=3, each day, Fig 1B).

Anaesthesia was induced by inhalation of isoflurane (WAKENYAKU CO., Kyoto, Japan) and was maintained with an intraperitoneal injection of pentobarbital (35 mg/kg, WAKENYAKU CO.). A 16-gauge angiocatheter was inserted into the trachea, and the animals were mechanically ventilated at 3 ml×30 breaths /min with a positive end-expiratory pressure of 2 cmH2O.

We extirpated the entire samples of the left lung adhering to the chest wall from the second to the seventh intercostal spaces after redo-thoracotomy. The length of the pleural adhesions was measured at the caudal side using a digital calliper in blinded fashion (Fig 2B).

Surgical technique: (A) Left lateral thoracotomy through the 4th Intercostal space and cauterisation of the visceral pleura were performed (arrow). The intercostal incision length and cauterising length are 20 mm and 10 mm, respectively. (B) After the study period, the whole left lung and chest wall with 2-7th ribs were extirpated. The length of adhesion (asterisk) between the lung and chest wall was measured with a digital calliper.

Evaluation of the histology of adhesion formation

Expressions of the cytokine staining were divided into four intensity grades (no staining, mild staining, moderate staining, and intense staining) in the adhesion region and along the border of the normal lung as previously reported [14]. The intensity grade was judged using the majority samples of the grade in each immunohistochemical stainings.

Statistical analysis was performed using JMP software (version 12.2; SAS Institute Inc., Cary, NC, USA). All data were analysed with the Mann- Whitney's U test. Two-way ANOVA was used for the comparisons of two groups among each day. A p-value <0.05 was considered statistically significant. The results were described as the mean ± standard deviation.

One sample in the control group was excluded because of rat death in the administration period from an unknown cause. Two samples in the aspirin group were excluded because of total absence of the pleural adhesions. The adhesion length was significantly shorter in the aspirin group (n=6) than that in the control group (n=7) (8.7±2.0 mm vs. 11.2±1.0 mm, respectively; p=0.024) (Fig 4).

Histology of the adhesion formation

Macroscopically, fibrin clots and blood piles surrounded the injured section on day 1 after the procedure, and no adhesion was observed. On day 3, loose adhesions easily dissected were observed between the injured lung and the chest wall. On day 7, adhesions completed along the line of the thoracotomy incision and were firmly formed on day 14.

During the adhesion formation process, the time course of macroscopic and histological findings of the aspirin group was morphologically similar to that of the control group. Inflammatory cells emerged and fibrin and blood clots were piled from day 1. On day 3, the fibrin clot shrunk and the inflammatory cells migrated. Fibroblasts appeared in this period as with the control group. The adhesion had completed on day 7 and had formed densely with fibroblasts and vessels increasingly on day 14 (Fig 5I-L).

Immunohistochemical evaluation of the adhesion site

The time course of recruited inflammatory cells and cytokines in the adhesion site of the lung is shown in Table 1 and Figure 6A-X. 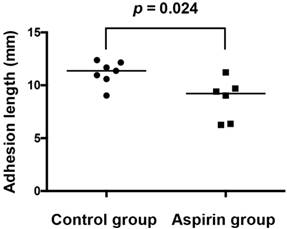 Histological findings around the procedure site of the lung (original magnification ×40; A-D, ×400; E, ×200; F-H): In the control group, on day 1, the fibrin clots and red blood cells are piled (A, E). On day 3, the fibroblast (arrow) appear in the border between the procedure site and normal pulmonary parenchyma of the lung border (B, F). On day 7, the adhesion between the chest wall and the lung is formed entirely (C, G). On day 14, the fibroblasts are increased in number and the adhesion became dense (D, H). In aspirin group, these findings were morphologically similar the control group (×400; I, ×200; J-L). 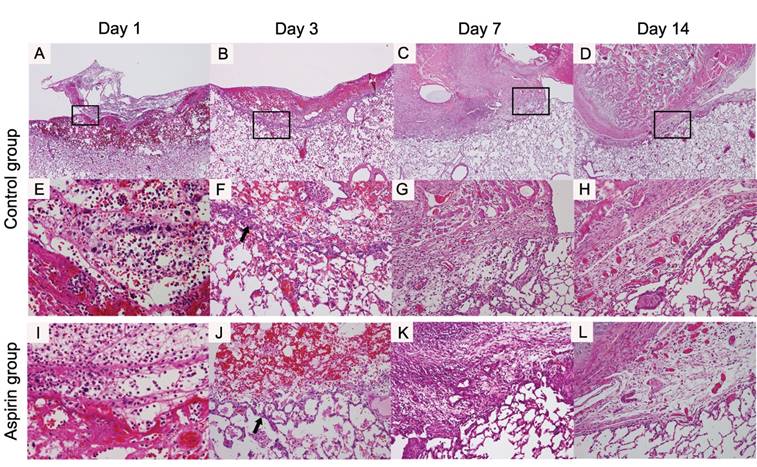 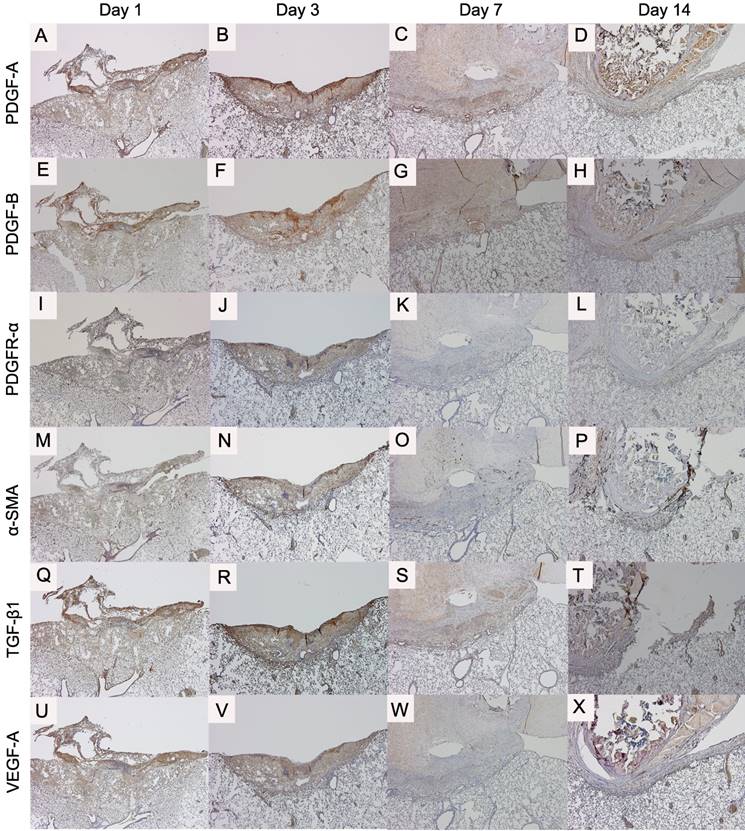 Through our experiments, we demonstrated the immunohistochemical expression of PDGFs and that an increasing number of macrophages expressed PDGFs on days 1 and 3. To the best of our knowledge, PDGF has never before been reported to associate with adhesion formation. We showed that PDGFs potentially affected pleural adhesion formation in the early phase. PDGF is released by platelets and secreted by activated macrophages at the site of injury during the wound healing process [19]. We showed that PDGFs were expressed on the inflammatory cells during the adhesion process.

We showed that pleural adhesions were formed during the wound healing process. Cytokines PDGF-A, PDGF-B, PDGFR-α, TGF-β1, and VEGF-A were expressed on day 1 after the procedure, and the expression of most of these cytokines peaked on day 3. These results are compatible with those of previous studies reporting that these cytokines function mainly in the early phases of wound healing [20-22]. These cytokines were shown to be relevant to pleural adhesion formation in the early phase.

PDGF expression and the number of macrophages expressing PDGFs decreased in the aspirin group compared with that in the control the group. Moreover, the number of fibroblasts expressing α-SMA decreased in the aspirin group. Hence, aspirin could inhibit PDGF secretion, inhibit macrophage activation, and inhibit fibroblast recruitment. Aspirin exhibits anti-inflammatory effects and inhibits platelet activation by blocking the production of thromboxane A2 [23]. These interactions could supress the production of several cytokines, including PDGFs, thus preventing the congregation of inflammatory cells. Aspirin also directly inhibits macrophage activation [24, 25]. Our observations might be explained by these mechanisms. 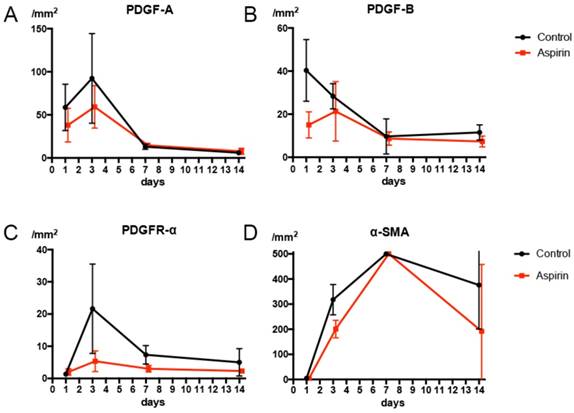 TGF-β1 is known to be increased in sites of adhesion [26]. Similar to PDGFs, TGF-β1 is abundant in the platelet-rich plasma [20]. Acetylsalicylic acid inhibits cell proliferation through TGF-β expression [27]. However, in this study, we observed no difference in TGF-β expressions between the aspirin and control groups.

VEGF are released in the early phase of postoperative adhesions development [28]. Because VEGFs are not abundant in platelet-rich plasma, aspirin might not be highly effective in reducing VEGF. This may be why, with respect to VEGF expression, we observed no difference between the aspirin and control groups.

This study has two limitations. First, we set the period for adhesion formation to 14 days, because platelets begin to secrete activating factors during the early phases after injury [22]. In a previous report, mesothelial cells began to emerge at 3-5 days after injury to the pleural surface [29], and the adhesions were formed by day 7 after pleurodesis [18]. In our study, most dynamic cytokine interactions were observed on days 1 and 3 after the surgical procedure. The pleural adhesions were already present by the 7th day and showed histopathological changes up to 14 days after pleurodesis. Our results showed that aspirin could suppress pleural adhesion formation in the early phase; however, these effects were not observed in the chronic phase of adhesion development (beyond 14 days). Second, we administrated high-dose aspirin to rats. The dose-threshold for aspirin in rats has not been sufficiently investigated. Previous reports in small animals showed that high-dose aspirin inhibited alveolar COX-1 and -2 [30] or arterial thrombosis [31]. We selected high-dose aspirin to inhibit pleural adhesions formation in a rat model; however, the effect of low-dose aspirin was not investigated.

The authors would like to thank Editage (www.editage.jp) for English language editing.

This work was supported by Japan Society for the Promotion of Science (JSPS) KAKENHI, Grant Number J15K11943.

16. Tanaka A, Abe T, Matsuura A. Prevention of postoperative intrapleural adhesion of the thoracotomy incision by a bioresorbable membrane in the rat adhesion model. Annals of thoracic and cardiovascular surgery: official journal of the Association of Thoracic and Cardiovascular Surgeons of Asia. 2000;6:151-60