Epithelial-mesenchymal transition (EMT), which involves the dramatic reorganization of the cytoskeleton, is a crucial initiating step in tumor invasion and metastasis. Protein 4.1B is a membrane-cytoskeleton cross-linker that plays an important role in tumor progression and metastasis; however, the functional roles of 4.1B in melanoma remain unclear. In this study, we aimed to investigate the effect and underlying mechanism of 4.1B on melanoma cells. Our results demonstrated that 4.1B expression was downregulated in murine B16 and B16-F10 melanoma cell lines. Ectopic 4.1B expression significantly inhibited the migration of melanoma cells and pulmonary metastasis. We further investigated the possible mechanism underlying the effect of 4.1B on EMT. The results showed that ectopic 4.1B expression altered the expression of representative EMT markers (E-cadherin, vimentin and N-cadherin), and inhibited the expression of three important transcription factors (Slug, Snail, and Twist) related to EMT in melanoma cells. Moreover, the expression of integrin α5, β3 and matrix metalloproteinase 9 (MMP-9), which is known to regulate cell adhesion, migration and invasion, were suppressed. In conclusion, our data indicate that 4.1B is an important regulator during EMT progression in melanoma cells, which may present a potential target for the prevention and treatment of melanoma.

Melanoma is the most lethal skin cancer, and it's incidence has increased at a rate of approximately 3-5% each year (1, 2). Innumerable therapeutic strategies have been designed to treat melanoma, however, no current treatments are able to substantially extended patient survival time (3, 4). Recently, the immunotherapy against melanoma have been gradually developed with the elucidation of the role of immune checkpoint molecules in tumor, such as anti-CTLA4 and anti-PD1 agents, nevertheless, many melanoma patients which treated with these agents do not have an objective response (5). The high mortality rate of melanoma is reported to be closely related to tumor metastasis, thus, dissecting the molecular mechanisms underlying melanoma invasion and metastasis is urgent for developing novel and more effective therapeutic approaches for this malignancy.

Growing evidences have demonstrated that epithelial-mesenchymal transition (EMT) promotes melanoma cell invasion and metastasis and involves the reorganization of the cytoskeleton (6). During EMT, proteins that interact with the cytoskeleton such as epithelial cadherin (E-cadherin) are downregulated and the expression of mesenchyme markers, including vimentin and neural cadherin (N-cadherin) are upregulated (7-8). Moreover, in the last stage of EMT, the basement membrane and extracellular matrix (ECM) are degraded by the increased expression of proteases (9), such as the matrix metalloproteinases (MMPs).

Protein 4.1B is one member of membrane cytoskeleton protein 4.1 family (10). Protein 4.1B located under the cell membrane connecting the plasma membrane and the cytoskeleton and participates in the organization of the cytoskeleton (11). Consequently, protein 4.1B is regarded as a functional adaptor molecule plays important roles in cell morphology, cell-cell adhesion, and cell migration. More and more studies indicated a tumor suppressor DAL-1, which deleted in adenocarcinoma of the lung, was proved to be a paralogue of 4.1B (EPB41L3) (12), and the important function of 4.1B in cancer progression is suggested by its frequent loss in a number of cancer (13-17). Moreover, it was demonstrated that protein 4.1B associates with cell motility and adhesion contribute to the process of cancer metastasis by binding various cell adhesion molecules, such as CD44, TSLC-1, Caspr and Caspr2 (18-19). And, our previous study has proved the absent expression of 4.1B in murine melanoma cells (20). However, studies on the biological effects of 4.1B on melanoma cells and the corresponding underlying mechanisms are still lacking. In this study, we aimed to investigate the effect of 4.1B on melanoma cells and EMT. Our results showed that the expression of 4.1B was downregulated in melanoma cells. Furthermore, our findings implicated 4.1B as an EMT/metastasis suppressor.

The mouse melanoma cell lines B16 and B16-F10, as well as mouse embryonic fibroblasts (MEFs), were obtained from the Shanghai Cell Bank of the Chinese Academy of Sciences (SCAS; Shanghai, China). B16 is the primary cell line and the B16-F1 cell line was produced from the mouse model of pulmonary metastasis with intravenous injection of B16 cells, eventually, the B16-F10 cell line was selected repeatedly ten times. Cells were cultured in Dulbecco's modified eagle's medium (DMEM) (Gibco, Grand Island, NY, USA) supplemented with 10% fetal bovine serum (FBS), 1% glutamine, and 1% penicillin-streptomycin at 37°C with 5% CO2.

The plasmid pEGFP-N1-4.1B, containing the full-length 4.1B coding region, was constructed by our laboratory. The plasmid sequence was verified by the Suzhou Genewiz Biological Technology Co., Ltd (Suzhou, China). The control vector pEGFP-N1 was purchased from Invitrogen (Carlsbad, CA, USA). 5×105 cells/well were seeded in a 6-well plate and cultured for 20 h until they reached 70-90% confluence, then the cells were transfected with 3.5 μg/well of plasmid along with 12 μl/well Lipofectamine 2000 Transfection Reagent (Invitrogen Life Technologies, Carlsbad, CA, USA) .

A nick was made by scraping the middle of the cells with a sterilized tip, when the cells reached 80% confluence in 6-well plate, and photomicrographs were taken after 24 h. The wound widths in the microscopic images were measured by Image J (National Institutes of Health, Bethesda, MD, USA). This experiment performed in culture media without FBS.

Five- to six-week-old female C57BL/6 mice were purchased from Vital River (Beijing, China). Mice were bred under specific pathogen-free conditions, provided sterilized food and water, and housed in a barrier facility with a 12-h light/dark cycle. Mice were randomly divided into three groups, which were pEGFP-N1, pEGFP-N1-4.1B, or control B16. 1×106 cells along with 200 μl phosphate-buffered saline (PBS) were injected into the subcutaneous right forelimb armpit of each mouse to establish the subcutaneous tumor model. The length and width of the tumor were gauged with vernier caliper every two days and the volume of the tumor was calculated as follows: V = 0.5 × a × b2, where a is the length and b is the width). On day 14, mice were sacrificed and tumors were carefully taken out. The tumors weight was recorded and tumor growth inhibition rates (IRs) were calculated as follows: IR = (1 - Average tumor weight of experimental group/Average tumor weight of control group) × 100%. To establish the pulmonary metastasis model, a total of 2×105 cells along with 200 μl PBS were injected into each mouse via tail vein. On day 14, mice were sacrificed, and the pulmonary melanoma nodules were measured.

Proteins were extracted from MEF, B16, and B16-F10 cells using RIPA lysis buffer containing protease inhibitors (LEYBOLD Cable, Beijing, China). The protein concentration was measured with a BCA kit (LEYBOLD Cable). A total of 20 μg proteins were loaded in each lane and then were carried out with 10% sodium dodecyl sulfate (SDS)-polyacrylamide gel electrophoresis and electroblotting. And then the proteins were blocked with 5% nonfat milk at room temperature for 2 h and then incubated with primary antibodies overnight at 4°C. The antibodies used were as follows: anti-4.1B from the New York Blood Center (New York, NY, USA) and anti-EGFP, anti-E-cadherin, anti-vimentin, anti-N-cadherin, antib-MMP2, anti-MMP9, anti-integrin α5 and anti-integrin β3 and anti-GAPDH from Bogoo Biotechnology (Shanghai, China). Subsequently, the blots were incubated with horseradish peroxidase (HRP)-conjugated secondary antibody (Bogoo Biotechnology) diluted (1:4000) in blocking buffer for 1 h at room temperature. Proteins were visualized using an electrochemiluminescence (ECL) detection system (Thermo Fisher Scientific, Rockford, IL, USA).

4.1B expression is downregulated in melanoma cell lines

As cell migration is considered a critical step in metastasis, a wound-healing assay was used to examine the effect of protein 4.1B expression on cell migration in vitro. We observed that the edges of wounds in B16 (Figure 2A) and B16-F10 (Figure 2B) cells transfected with 4.1B were markedly closer than those in control cells. 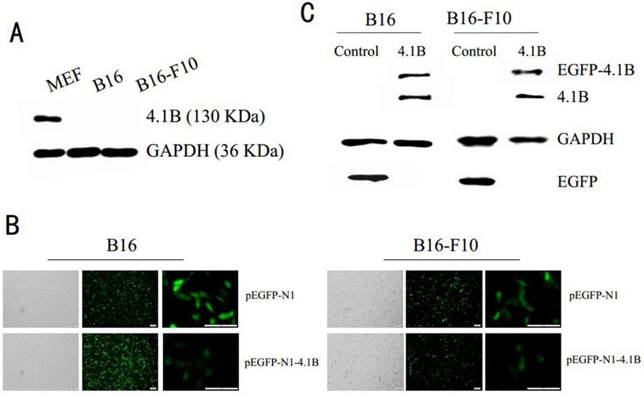 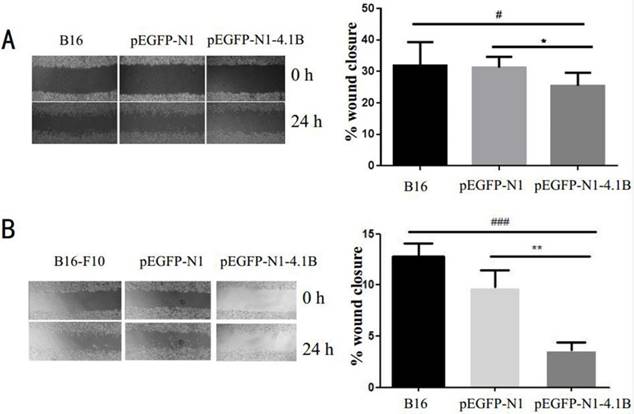 Protein 4.1B attenuates melanoma cell growth and metastasis in vivo. B16, B16-pEGFP-N1 and B16-pEGFP-N1-4.1B cells were used to inoculate the right forelimb by subcutaneous injection. B16-F10-pEGFP-N1 and B16-F10-pEGFP-N1-4.1B cells were injected into the tail vein. Tumor volume (A), tumor weight (B), tumor inhibition rate (C), number of lung nodules (E). (D) Representative images of the tumors in each group. 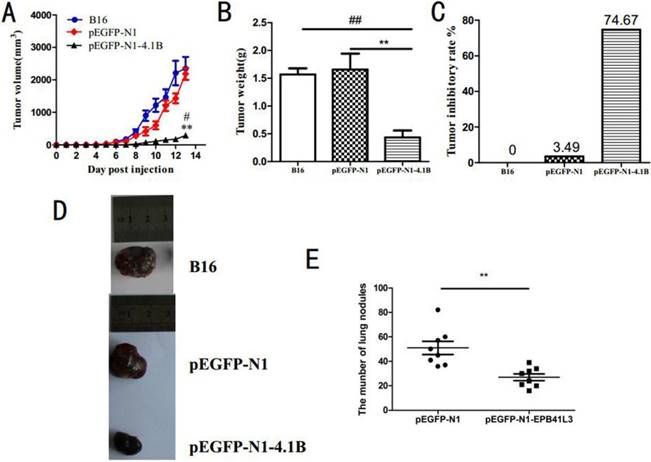 In addition, a model of pulmonary metastasis was established through the tail vein injection of pEGFP-N1-4.1B or pEGFP-N1 B16-F10 cells into mice. All mice were sacrificed 14 days after injection. As shown in Figure 3E, more metastatic nodules were found in the lungs of the mice injected with pEGFP-N1-4.1B-transfected cells than in the lungs of those injected with pEGFP-N1-transfected cells. This suggests that protein 4.1B inhibits the pulmonary metastasis of melanoma. Combined with the above findings, we conclude that protein 4.1B suppresses melanoma tumor growth and metastasis.

4.1B overexpression alters the expression of EMT markers in B16 and B16-F10 cells

Protein 4.1B alters the expression of integrins and matrix metalloproteinases in B16 and B16-F10 cells 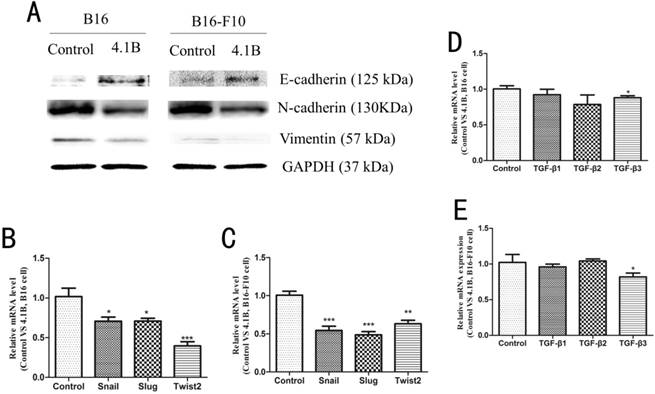 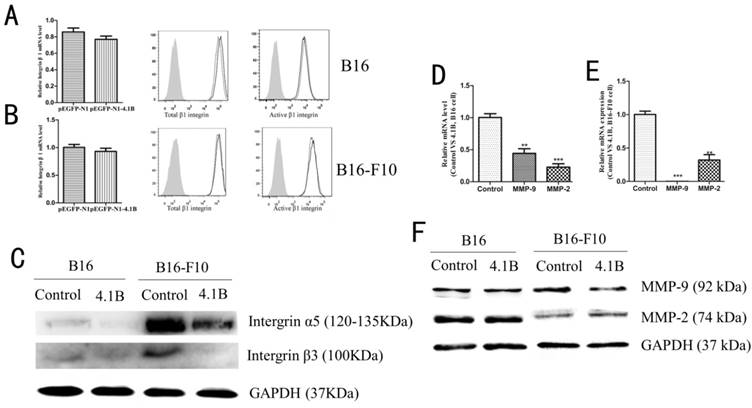 As an important component of the membrane-associated cytoskeleton, protein 4.1B was originally identified in cell-cell junctions. The SABD and FERM domains of 4.1B lead this protein to function as a scaffold by binding to the cell membrane and connecting to the cytoskeleton (21). This specific structure is essential for the maintenance of cell polarity and cell-cell adhesions. Moreover, 4.1B was originally considered a tumor suppressor gene based on its frequent downregulation in several cancers, including cervical cancer, laryngeal squamous cell carcinoma, and breast cancer (22, 23). These findings are in agreement with our primary result that 4.1B expression was absent in melanoma cell lines. Thus, based on this result, we speculate that 4.1B may inhibit the progression of melanoma. As expected, ectopic 4.1B inhibited the cell growth and the metastatic capacity of melanoma cell lines in vivo and in vitro. These results suggest that 4.1B acts as an anti-oncoprotein by suppressing the progression of melanoma.

Upon the progression of EMT, the ECM is remodelled and cell-ECM interactions are changed. Integrins are the transmembrane heterodimeric extracellular matrix receptors that provide the linkage between the ECM proteins and intracellular skeleton proteins. During the progress of EMT, the cells interact with a different ECM, thus, the expressions of some epithelial integrins are suppressed, but the others are activated. It has been proved that increased integrin β1, β3 and α5 expression during EMT increases cell adhesion to fibronectin, which is also upregulated and promotes cell invasion and migration in melanoma cell (28, 29). Moreover, changes of the integrins expression trigger the increased expression of proteases during EMT, such as MMP2 and MMP9, thus promoting ECM proteins degradation and the cells invasion (30). Here, we found that ectopic expression of 4.1B suppressed the expression of integrin α5, β3 and MMP-9, however, no effect on integrin β1 and MMP2. Together those results suggest that protein 4.1B suppresses tumor metastasis by regulating epithelial-mesenchymal transition progression in melanoma cells.

According to EMT-based studies, more and more evidence has indicated that multiple signaling pathways are involved in the progress of EMT, including the Wnt, Notch, TGF-β, fibroblast growth factor pathways and epidermal growth factor (31). Among these, TGF-β signal plays a predominant role in the induction of EMT. TGF-β regulates the expression of three important EMT-related transcription factors (Snail, ZEB1/2, and Twist) through initiating Smad signaling (32). And then Snail indirectly effects on other transcription factors, such as Sp-1 and Ets-1, which are considered to be partially responsible for the activation of MMP-9 (33). In this study, we found that the expression of TGFβ3 was significantly downregulated at the mRNA level in melanoma cells transfected with 4.1B. This suggests that protein 4.1B suppresses the progression of EMT in melanoma cells, probably through the TGF-β signaling pathway.

In conclusion, this is the first report demonstrating that the overexpression of 4.1B inhibits cell proliferation, migration, and EMT in melanoma cells. Thus, 4.1B may represent a novel molecular target for the prevention and treatment of melanoma.