Methods: We conducted an ambispective cohort study including 225 post-surgical CRCLM patients between May 2007 and July 2012 and performed a follow-up investigation of survival in July 2017.

Conclusions: Compared with EGA, GA may provide a better survival outcome for CRCLM patients. The benefits of anaesthetic techniques in oncological surgery are most likely related to certain cancer types.

Colorectal carcinoma (CRC) remains one of the most common malignancies in China and ranks as the third most prevalent cancer worldwide.[1,2] Approximately half of CRC patients develop liver metastases (LMs), and 90% will die from this cancer.[3,4] Surgical resection of colorectal carcinoma liver metastases (CRCLMs) has been proven to be the only potentially curative therapy with a 5-year survival rate of up to 50%.[5-8] Many factors could affect the prognosis for overall survival, including microscopic status of the resected margin, number of metastases, a positive resection margin, extra-liver metastasis, degree of differentiation, depth of wall invasion, positive lymph node metastasis, and interval between the CRC operation and detection of CRCLMs.[9,10] In addition to these prognostic or predictive factors, the anaesthesia techniques applied in the procedure, which have profound implications for the prognosis of the procedure, are often neglected to a certain extent.

Epidural anaesthesia (EA) has been reported to preserve the perioperative immune response and to further affect cancer recurrence and metastasis in patients and in animals.[11] In addition, combined general-epidural anaesthesia (EGA) is frequently applied in major thoracic or abdominal surgery, which may provide stable haemodynamics and less medication or can even reduce cancer recurrence and prolong cancer-free survival in different kinds of procedures, although some studies have shown no significant improvement in survival compared to that with general anaesthesia (GA).[12-16] The mechanical basis underlying this phenomenon might be related to the effects of the anaesthetic technique or of specific anaesthetic drugs on immunology and cancer cell biology.[17] However, current publications often have limited sample sizes and other factor variations. Comprehensive studies are needed to provide further evidence that the combination of EA and GA might be related to improve overall survival.

There is no global consensus on the better choice of anaesthesia techniques related to operations for CRCLM after surgery, as studies in this field are scarce.[11] Withal, the choice of optimal anaesthesia techniques for complex operations and diseases has long been neglected. Previous studies and meta-analyses revealed that EGA might be associated with an improvement in the prognosis of patients with operable prostate cancer. Regarding the prognosis of colorectal cancer, no obvious improvement of EGA was detected compared to GA.[18] This result, although coming from the analysis of heterogeneous data, suggests that the applicability and priority of EGA or GA might be related to survival outcome. Thus, in considering the complexity of the disease and the benefits to patients, it is necessary to evaluate the priority of anaesthesia techniques for surgical resection of CRCLMs.

In this study, we compared the effects of EGA with those of GA on survival associated with CRCLM after surgery. We aimed to explore the advantages and disadvantages of EGA, compared to those of GA and based on this particular type of surgery, and to provide clinicians with further evidence for better decisions regarding the choice of anaesthesia techniques, via a large hospital-based ambispective cohort in China.

This ambispective cohort study was approved by the Ethics Committee of the Eastern Hepatobiliary Surgical Hospital of China (EHBHKY2012-002-028). Written informed consent was obtained from participants or their surrogates before enrolment. After the primary study design and hypothesis proposal, we reviewed the data of patients with CRCLMs after surgery between May 2007 and July 2012 from hospital medical records of the Eastern Hepatobiliary Surgery Hospital, Shanghai, China. Then, we conducted a follow-up investigation of treatment outcomes until July 2017. Patients were enrolled in this cohort if (1) they had been diagnosed with CRCLM after surgery; (2) the pathological classification of original colorectal cancer was moderately or highly differentiated tubular adenocarcinoma, Dukes' stages B-C; (3) the patients had received treatment by hepatic metastasis resection with R0 excision;[19] (4) the anaesthesia method was GA or EGA; (5) lesions were located in the liver with no lymphovascular invasion; and (6) there was no severe systemic disease and metastases in other organs before hepatic resection. Patients were excluded if (1) they did not receive recommended postoperative medications or chemoradiotherapy or (2) if death occurred because of accidents or diseases in other systems not related to the primary carcinoma and surgery.

All patients received standardized radical hepatic metastasis resection using either GA alone or EGA. The anaesthesia type was chosen in overall consideration of the patients' general conditions as well as by the anaesthesiologist's decision. GA was induced as combined intravenous-inhalant anaesthesia, and the choice of hypnotic or sedative anaesthetic drugs, analgesics and muscle relaxants were at the discretion of the attending anaesthesiologists; such medications included propofol, sevoflurane, dexmedetomidine, fentanyl, remifentanil, sufentanil, and atracurium. Pre-operative medication and postoperative analgesia were allowed and accepted. EGA was induced as a standard technique: Patients received epidural catheterization at thoracic 7-10 interspaces before anaesthesia induction. A test dose of 2% lidocaine was injected. After induction of anaesthesia, a bolus of 7-10 ml 0.75% ropivacaine was administered via a thoracicepidural catheterand followed by a continuous epidural infusion of 0.2% ropivacaine at a rate of 6 ml per hour. We stopped the epidural infusion and removed the epidural catheter at the end of the operation. The mean arterial pressure (MAP) was maintained from 55 to 65 mmHg during anaesthesia. All operations and anaesthesia occurred at least five years before we started the current study.

Data were collected through clinical charts from surgeons' offices and institutional databases, and some survival data were accessed through doctors' follow-up investigations based on registry numbers as necessary and if accessible. Medication or chemotherapy in the regimen after surgery was examined, information on adverse events was recorded, and data on each patient's time of death were collected as well as the cause of death. If no effective postoperative data were available, the subjects were effectively removed from the analysis.

Data are described using descriptive statistics (mean/standard deviation or median/range for continuous variables; absolute number/frequency distribution for categorical variables). To adjust for confounding between cohorts, we performed a chi-squared test and Student's t-test or Wilcoxon- Mann-Whitney test for categorical variables and continuous variables. Survival was compared using Kaplan-Meier survival curves and log-rank tests. Next, we used a proportional hazards regression model (PROC PHREG) to compare the hazard ratio and 95% confidence interval (CI) for survival between the two cohorts. The significance level was set at P<0.05. All statistical analyses were performed using SPSS (version 22.0, College Station, TX). 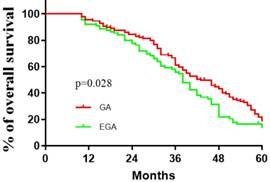 In a retrospective analysis of patients undergoing surgical treatments for breast cancer and prostate cancer, Gottschalk et al. and Biki et al. reported that EGA was associated with a longer recurrence-free survival.[20,21] Similar results were demonstrated in patients with melanoma and prostate cancer, for which EGA was associated with a lower risk of recurrence.[22,23] However, some other studies reported contrasting results showing that EGA cannot provide better outcomes in cancer patients.[21,24-26] A meta-analysis on this topic showed that EGA might be associated with an improvement in the prognosis of patients with operable prostate cancer, and no significant improvement in colorectal cancer was found.[18] These studies suggest that the potential benefits of EGA may depend on the tumour type, which may be related to the different pathologies and metastases. Thus, large-scale clinical studies involving different cancer types are needed to investigate the potential influence of the anaesthetic technique used during surgery on cancer-related outcomes.

This study was based on a chart review of medical records, with a sample size of 225, and reflected the survival of patients following CRCLM resection in a real-world population in China. Our results suggested that EGA use seems to provide no benefit with respect to the rate of overall survival in CRCLM patients. For GA patients, the survival seems slightly longer than that of EGA patients. In contrast with the results obtained by Gottschalk et al. showing that EGA might improve the outcomes of elderly individuals undergoing colorectal cancer surgery, it seemed that patients older than 60 years in our study did not benefit from EGA treatment. It is possible that EGA might influence the cancer-related outcomes of patients through different mechanisms and that only a subgroup of patients with certain constraints may benefit from it.

Previous studies concluded that the possible mechanism of EGA in cancer-related survival might be complicated and comprehensive, including haemodynamic factors and the stress and immune responses, as epidural use during surgery could decrease the need for opioid use, preventing pain and decreasing the activation of inflammatory factors, thus promoting tumour surveillance.[27] The elevated NK cell activity of the immune system induced by lidocaine epidural infusion also greatly benefits elderly patients undergoing colorectal cancer surgery. However, our study provides a diverse outcome showing that EGA probably does not perform well or may even be worse than GA treatment with respect to the survival of post-surgical CRCLM patients. Possible causes may include the following: First, EGA is an invasive operation; for patients with advanced cancer, such as CRCLMs, the trauma from epidural treatment may be greater than its potential immune benefits. Second, the benefits of EGA are limited to specific tumour types and special populations and thus are not universally applicable. Third, although the baseline characteristics of the two different groups were compared and deemed largely similar, anaesthesiologists may still choose to use a combined epidural technique for patients with special situations or high risks for haemodynamic stability intraoperatively and better analgesia postoperatively. Considering this fact, it is more appropriate to conclude that EGA use does not provide obvious long-term survival benefits for CRCLM patients treated by resection.

This analysis has several limitations or factors that are unavoidable. First, epidural use in GA has waned due to the progression of GA techniques and the potential hazards of invasive techniques. Patients using EGA are often under special conditions or have high risks. Second, we could not determine whether the epidural use in each subject was sufficient or up to standard. Similarly, we could not determine whether other surgical or anaesthesia techniques were performed using standard criteria. More importantly, unrecorded patient characteristics that influenced the risk of mortality may have influenced the anaesthetic management. Since surgical outcomes may be affected by multiple factors and tumour types, conclusions on the benefits of EGA should be drawn with caution, as certain anaesthesia techniques may not have a remarkable effect on the postoperative survival of cancer patients. More prospective studies, including randomized controlled trials and retrospective studies with a large scale, are needed. In addition, since we compared only the outcomes of general survival between patients with the two anaesthesia techniques, more studies are needed to further investigate other short-term or long-term outcomes, such as blood transfusion and ICU length of stay, to provide a better reference for clinicians.

This study was supported by a grant from the National Natural Science Foundation of China: (NSFC, No.81371511) and Shanghai Municipal Commission of Health and Family Planning Funding for Key Developing Disciplines (2015ZB0101).

13. Kaneda K, Takeuchi J, Yakushiji T. et al. [A case of anesthesia for a patient with a huge pheochromocytoma accompanying difficulty in hemodynamics control]. Masui the Japanese Journal of Anesthesiology. 2006;55:900-3