Imbalance of erythropoiesis and iron metabolism in patients with thalassemia

Aim: This study aimed to evaluate the imbalance of erythropoiesis and iron metabolism in patients with thalassemia.

The combination of ineffective erythropoiesis and peripheral hemolysis leads to anemia, hypoxia and increased erythropoietin (EPO) production [5, 6]. In β-thalassemias, ineffective erythropoiesis induces the release of growth differentiating factor 15 (GDF15), twisted gastrulation protein homolog 1 (TWSG1), hypoxia-inducible factor and erythroferrone (ERFE), which inhibits hepcidin [5]. The expansion of the erythroid compartment leads to the overexpression of GDF15, which inhibits the expression of hepcidin, ultimately leading to iron overload [7]. A soluble form of the transferrin receptor (sTfR) is an erythropoiesis biomarker and is associated with overall morbidity in patients with NTDT [8].

Hence, thalassemias involve the perturbation of the balance between erythropoiesis and iron metabolism. The nature of the 'erythropoiesis-hepcidin- iron storage' axis may differ across different thalassemia types [9], and this axis is poorly understood in patients with NTDT, particularly in Southern China, where HbH disease is often associated with high morbidity.

The levels of erythropoietic biomarkers (GDF15, EPO and sTfR) and iron overload biomarkers [hepcidin, serum ferritin (SF), liver iron concentration (LIC) and cardiac T2*] were compared in patients with different types of thalassemia, as well as between patients and healthy controls, and several correlations were analyzed to shed light on the relationship between erythropoietic activity and iron metabolism in patients with thalassemia.

This cross-sectional study included 192 patients with NTDT and 94 patients with TDT who were diagnosed based on conventional clinical and hematologic criteria [1, 10]. The patients were enrolled between June 2013 and December 2016 in the Department of Hematology at the First Affiliated Hospital of Guangxi Medical University. In addition, 101 healthy volunteers were recruited from the medical examination center of the same hospital. All patients or their parents (if minors) provided written informed consent. This study was approved by the Medical Ethics Committee of the First Affiliated Hospital of Guangxi Medical University.

Interviews were conducted with patients to obtain the following clinical data: age, gender, age at the time of anemia diagnosis, blood transfusion history and previous chelation therapy. Transfusional iron intake mg Fe/kg/day was calculated according to the following formula:

Characteristics and clinical parameters of patients with thalassemia and normal controls

Hepcidin suppression and iron overload in patients with thalassemia

Indices of erythropoietic activity and iron overload in patients with thalassemia and normal controls (median, range) 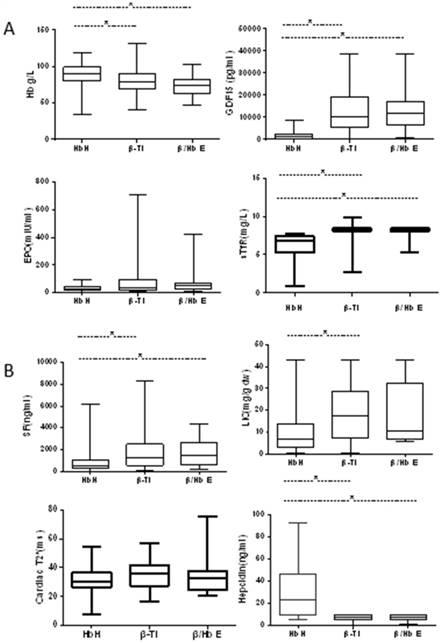 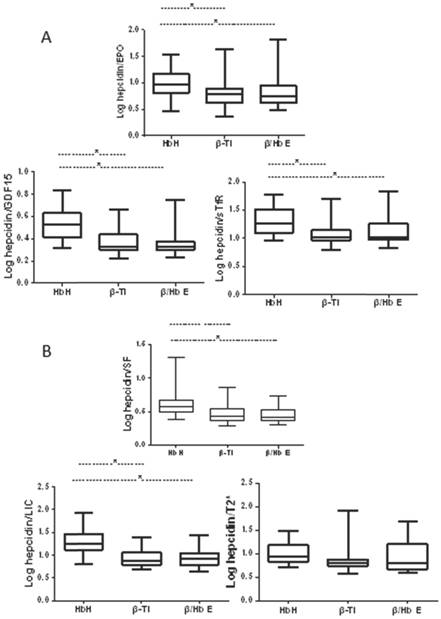 Comparison of Indices of erythropoietic activity and LIC iron overload of NTDT patients according to requirement for transfusion (median, range)

The hemoglobin levels of TDT patients in our study are lower than those pre-transfusion hemoglobin of the TDT guidelines. In China, TDT and NTDT patients were poorly-chelated and modestly transfused, our previous published paper has already proved that TDT patients in China are poorly-chelated and have a high burden of iron overload, 6 years old TDT patient was tested cardiac iron overload[11]. The above data indicated that due to insufficient blood and limited resources in the health insurance system, TDT and NTDT patients enrolled showed low hemoglobin levels and heavier iron load, which pose challenges to optimum care.

The levels of sTfR were found to be higher in patients with thalassemia patients compared to those in controls, but no significant differences were found between patients with TDT or NTDT. However, significantly higher levels of sTfR were observed in patients with β-thalassemia intermedia than in patients with HbH disease. In the presence of normal or elevated SF levels, sTfR levels reflect bone marrow erythropoietic activity [3]. Moreover, sTfR has shown impressive diagnostic accuracy in predicting risk of extramedullary hematopoiesis and clinical severity score [8, 27], age at first diagnosis and risk of therapeutic intervention and iron overload in patients with NTDT [28]. Consistent with the results of the present study, a previous study suggested greater erythropoietic activity in children with TDT than in children with β-thalassemia intermedia [28]. As in developing countries, our previous study reported that the TDT patients are more poorly-chelated, have a high burden of iron overload, and myocardial siderosis occurred in younger patients than in the other study. This was partly due to the lack of specific knowledge of the disease, shortages of blood, lower pre transfusion Hb levels and the limited availability of chelators [11].

Reduced ratios of hepcidin with SF, LIC and cardiac T2 values were observed, indicating the inappropriate suppression of hepcidin synthesis. This hepcidin suppression, together with elevated sTfR and GDF15 levels, and reduced ratios of hepcidin with the erythropoiesis index suggested that, compared with controls, the hepcidin levels in thalassemia were also more sensitive to down-regulation by ineffective erythropoiesis, indicating a greater extent of ineffective erythropoiesis and signaling a need for a higher iron demand. Ultimately this leads to increased iron absorption and recycling, in agreement with studies on erythrocyte membrane defects and thalassemia traits [33].

Erythropoiesis and iron metabolism balance out with each other to match iron supply with globin synthesis, which is essential for normal production of red blood cells [33]. Hepcidin is the master regulator of systemic iron homeostasis: it facilitates iron balance by controlling intestinal iron absorption and recycling [32]. An increase in iron stores, transferrin saturation and inflammation trigger a homeostatic increase in liver hepcidin expression [34]. Conversely, hepcidin expression is suppressed in the event of iron deficiency or increased erythroid activity due to physiological erythropoiesis or pathological, ineffective erythropoiesis [6]. The specific metabolic steps of how erythropoiesis causes hepcidin suppression remains unclear.

The present study found that patients with thalassemia showed lower hepcidin levels but higher EPO levels compared with controls, raising the possibility that EPO regulates hepcidin levels. It is likely that other factors are also important in this regulation because human and animal studies have shown that anemia alone, even when EPO levels are elevated, is insufficient to suppress hepcidin levels [35-37]. GDF15 may help mediate the interaction between EPO and hepcidin. A negative correlation was observed between GFD15 and hepcidin in patients with thalassemia, which was consistent with the findings of a previous study [38]. Thus, it is possible that GDF15 over-expression inhibits hepcidin expression, contributing to iron overload in patients with thalassemia. Further studies are needed to examine this hypothesis, especially because a study in GDF15-knockout mice showed no reduction in hepatic hepcidin expression during increased erythropoietic activity [39].

The present study found that, like GDF15 levels, sTfR levels were correlated negatively with hepcidin levels in patients with hemoglobin E/β-thalassemia and TDT. This may shed light on the relationships between sTfR and hepcidin, which, to date, are poorly understood. The negative correlation in the present study was consistent with the idea that hepcidin suppression leads to higher iron demand and therefore to increased ineffective erythropoiesis. This finding was also consistent with the suggestion that the ratio of hepcidin or ferritin level to sTfR level may be useful for monitoring patients with thalassemia with respect to erythropoietic activity and the risk of iron overload[33]. Further studies are needed to clarify the contribution of sTfR to the regulation of hepcidin.

Another regulator of hepcidin expression that may help explain the present findings is the protein hormone, erythroferrone (ERFE), which participates in an EPO-induced pathway that suppresses the expression of hepcidin, twisted gastrulation protein 1 and GDF15[40]. Ablation of ERFE in an animal model of thalassemia restores hepatic hepcidin expression to wild-type levels [41]. ERFE may be responsible for the iron-loading phenotype observed in ineffective erythropoiesis and for regulation of iron absorption during periods of stress-induced erythropoiesis.

Limitations of the study

The limitations of this study were as follows: (1) it was a single-center study with a relatively small sample size, (2) MRI scans could not be performed in all cases and (3) TDT patients were transfused differently and not all patients received chelation therapy. Although the evaluation and biomarker correlations in these patients was a snapshot at a defined time point in their disease, we suggest that the data obtained justifies the implementation of a larger multicenter trial in the future.

This study was supported by research grants from the National Natural Science Foundation of China (grant no. 81260090 and 81460025), the Guangxi Natural Science Foundation (grant no. 1598011-1), and the Guangxi key laboratory of thalassemia research (grant no.16-380-34). The authors thank all participants involved in this study. The authors would like to thank Dr. Dev Sooranna, Imperial College London, for editing the manuscript.

24. Adela R, Banerjee SK. GDF-15 as a Target and Biomarker for Diabetes and Cardiovascular Diseases: A Translational Prospective. Journal of diabetes research. 2015;2015:490842

27. Ricchi P, Ammirabile M, Costantini S. et al. A useful relationship between the presence of extramedullary erythropoeisis and the level of the soluble form of the transferrin receptor in a large cohort of adult patients with thalassemia intermedia: a prospective study. Ann Hematol. 2012;91:905-9