Introduction: Most chronic hepatitis B (CHB) patients in China are primitively treated with a combination of lamivudine (LAM) and adefovir dipivoxil (ADV). Although antiviral resistance can be avoided with this combination therapy, using it can have harmful side effects related to ADV, specifically kidney and bone injury. This study was designed to compare viral suppression and kidney safety when switching LAM and ADV combination therapy de novo to entecavir (ETV) monotherapy in patients with CHB and compensated hepatic cirrhosis.

Materials and methods: In total, 360 CHB and compensated liver cirrhosis patients who received treatment of LAM and ADV combination therapy for more than 1 year were included in this study. One hundred and eighty patients continued combination therapy to serve as a control group and the other 180 patients were switched to ETV monotherapy to serve as the experimental group. The total course of therapy was 3 years. Laboratory studies were done every 3 months to measure liver and kidney function. Studies included glomerular filtration rate (eGFR), HBV-DNA, urine β2-microglobulin (β2-M) and retinol binding protein (RBP).

In this study, 273 patients with CHB and 87 patients with HBV infection and compensated hepatic cirrhosis from the First Affiliated Hospital of Zhejiang Medical University (Hangzhou, China) between June 2011 to June 2013 were enrolled. Pathology was confirmed based on medical history, physical examination, laboratory findings, ultrasound and radiological signs of cirrhosis. Patients with CHB and compensated hepatic cirrhosis were diagnosed according to the guideline of prevention and treatment for chronic hepatitis B (2010 version) proposed by the Chinese Medical Association Chinese Society of Hepatology and Chinese Society of Infectious Diseases.[11] All patients were adults ages 18 to 65 years and received de novo therapy of LAM and ADV for more than 1 year. Patients coinfected by hepatitis C-like virus, hepatitis delta virus or human immunodeficiency virus (HIV) were not included. Patients with HCC, alcoholic liver cirrhosis, autoimmune hepatitis, decompensated liver cirrhosis, hepatorenal syndrome, hepatic encephalopathy, spontaneous bacterial peritonitis, or other diseases such as cardiopathy, nephrosis, and cerebropathy were not included. Patients with an estimated glomerular filtration rate (eGFR) ≤ 60 ml/min/1.73 m2 were also excluded from this study. Informed consent was obtained from all patients and they understood all aspects of the experiment. The agreement was received by the Ethics Committee of the First Affiliated Hospital of Zhejiang University.

The project was carried out as a prospective case-control study. Of the 360 patients enrolled, 180 patients continued LAM and ADV combination therapy as the control group. The other 180 patients were switched to ETV monotherapy as the experimental group. Patients were randomly assigned to a group. Baseline data from both groups were compared to confirm comparability. The experimental group patients received 0.5 mg of ETV daily, and the control group patients received 100 mg of LAM and 10 mg of ADV daily.

Continuous variables were presented as the means ± SD and compared between the groups using Student's t test. Serum HBV DNA levels were compared after conversion to a logarithmic scale. Proportions were presented as percentages (%), and rate comparisons were performed using the χ2 test. The cumulative incidence of urine β2-M and RBP abnormalities were calculated using the Kaplan-Meier method, and group data were calculated using the log rank test. Statistical analyses were performed using SPSS version 16.0 (SPSS, Chicago, IL, USA). P values less than 0.05 were considered significant. 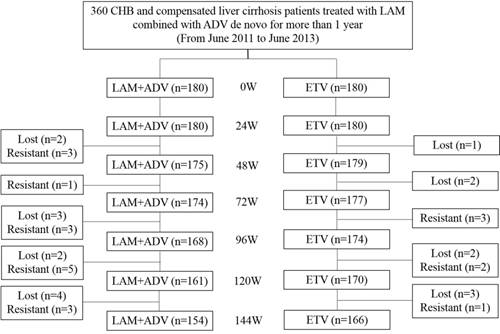 Dynamic change in the creatinine and estimated glomerular filtration rate (eGFR) values in the group that continued to receive LAM plus ADV combined treatment and the group that switched to ETV monotherapy.

LAM was the first anti-HBV drug in China. Because of its convenience, definitive curative effect, and limited side effects, it has become the mainstay treatment of HBV infection.[1, 12] The disadvantage of LAM is its high incidence of drug resistance with long-term treatment. Based on the literature, initial LAM antiviral treatment for CHB patients has YMDD gene resistance rates of 23%, 46%, 55%, 65% and 71% after the first, second, third, fourth, and fifth years of use, respectively.[13] One oral prodrug of adefovir is ADV, which is an analogue of adenosine monophosphate. Intracellularly, adefovir is metabolized to adefovir diphosphate, which inhibits HBV-DNA polymerase.[14] Due to the lack of cross resistance between ADV and LAM, telbivudine (LdT) or ETV, ADV combination therapy is widely used in LAM, LdT, and ETV salvage therapy after resistance develops or initial combination therapy fails.[15, 16] However, in patients with CHB long-term treatment with ADV can potentially cause renal impairment and hypophosphatemia. In Tanaka M's study, of the 292 patients treated with ADV combined with LAM, 9.6% patients developed kidney injury during a therapy duration of 64.3 mo.[17] Our results showed that during each of the three years of treatment for the control group, creatinine was elevated by at least 50 μmol/L compared to baseline in 1.12%, 4.00%, and 5.32% of patients, respectively. Decreases in eGFR by more than 30% of baseline occurred in 4.49%, 9.14%, and 14.79% of patients in years 1, 2 and 3, respectively. On the other hand, the experimental group had stable creatinine and eGFR levels.

Current evidence has indicated that in CHB patients, treatment with ADV increases the risk of renal dysfunction, but the mechanism remains unclear.[18, 19] It may be related to drug accumulation in the proximal tubules after long-term use of ADV. Such drug accumulation may induce reabsorption of microproteins (β2-M and RBP), glucose, amino acids, calcium, and phosphorus. Regular laboratory testing of serum or urine are important for early detection of and risk assessment for renal impairment because this condition is still reversible after prophylactic or therapeutic intervention.[20, 21] In our present study, in the 13 patients with urine β2-M and /or RBP abnormalities, urine RBP and β2-M increased gradually while eGFR decreased. Our results strongly suggest that if urine RBP or β2-M abnormalities are detected in CHB patients, LAM plus ADV therapy should immediately be switched to ETV monotherapy.

NA-resistance pathways (rtM204I/V, rtN236T and rtA181T/V) have now been characterized. The rtM204V/I pathway is responsible for resistance to the L-nucleosides, which include LAM, LdT and ETV, while the rtN236T pathway is responsible for ADV and TDF resistance.[22, 23] Because LAM and ETV resistance is accomplished via the same pathway, some might worry that switching therapy from LAM combined with ADV to ETV monotherapy will increase resistance. Our study showed a rate of viral genetic mutations in the group that switched to ETV to be higher than the group that continued to receive LAM combined with ADV. Of the 180 patients who continued to receive LAM and ADV combination treatment, 1.69% (3/178), 4.00% (7/175), and 8.88% (15/169) had genetic mutations in the first, second, and third year, respectively. On the other hand, only 0% (0/179), 1.68% (3/177), and 3.49% (6/172) of the 180 patients who received ETV monotherapy had genetic mutations consequently on the year 1, 2, and 3.

In conclusion, it is safe and effective to switch LAM and ADV combination therapy to ETV monotherapy when treating patients with CHB and compensated liver cirrhosis. Switching therapy for patients with CHB and compensated liver cirrhosis who have received LAM plus ADV therapy for more than 1 year to ETV monotherapy can improve the virological response as well as reduce ADV-associated renal impairment during long-term treatment. As a result, replacement should be considered as soon as possible.

This study was approved by the Ethics Committee of the First Affiliated Hospital of Zhejiang University.