Background and Objectives: Colorectal cancer is one of the most common cancers and the leading cause of cancer-related death worldwide. The impact of the primary tumor location on the prognosis of patients with colorectal cancer has long been a concern, but studies have led to conflicting conclusions.

Methods: In total, 465 colorectal cancer patients who received radical surgery were reviewed in this study. Enrolled patients were divided into two groups according to the tumor location. Disease-free survival (DFS) and overall survival (OS) were analyzed via the Kaplan-Meier method. A Cox regression model was employed to evaluate the independent prognostic factors for DFS and OS.

There are various embryological and biological differences between left-sided colorectal cancer (LCC) and right-sided colorectal cancer (RCC) [9]. RCC occurs in the cecum, ascending colon, and proximal two-thirds of the transverse colon, which arise from the embryonic midgut and receive blood perfusion from the superior mesentery artery, whereas LCC occurs in the distal one-third of the transverse colon, descending colon, sigmoid colon and rectum, which arise from the embryonic hindgut and are perfused by the inferior mesentery artery [10]. Studies have revealed that there are different pathologies and genomic patterns between LCC and RCC [11, 12]. However, the potential influence of these differences on prognosis has not been validated. Recently, studies have demonstrated that RCC presents a significantly worse prognosis than LCC in patients with stage IV disease [13]. Nonetheless, it remains unknown whether the primary tumor location affects the outcome for patients with stage I-III disease, particularly after radical surgery.

In this study, patients with colorectal cancer who underwent primary tumor radical resection were retrospectively reviewed to evaluate and compare the prognosis and survival factors for patients with stage I-III RCC and LCC after radical surgery.

Consecutive patients diagnosed with colorectal cancer at the authors' hospital from Jan. 2011 to May 2014 were retrospectively reviewed. The inclusion and exclusion criteria are presented as a flow diagram in Figure I. The eligibility criteria were as follows: received radical surgery for colorectal cancer; PS≤2; had no serious dysfunction of major organs (e.g., heart failure or uremia); had an appropriate course of chemotherapy (Patients with stage I or low-risk stage II disease did not require adjuvant therapy. Patients with high-risk stage II and stage III disease should receive chemotherapy for at least 4-6 courses). Patients who received radiotherapy or without complete follow-up data were excluded.

Enrolled patients were divided into two groups according to the location of the primary tumor: left-sided and right-sided colorectal cancer groups. The clinicopathologic characteristics of the patients in the two groups were balanced according to gender, age at diagnosis, and pathological diagnosis after surgery, including pathologic type, subtype, histological type, TNM classification (according to the 8th edition of the American Joint Committee on Cancer (AJCC) TNM staging system), and tumor grade.

The correlation between clinical pathological characteristics and tumor location (RCC vs LCC) according to the various cancer stages was calculated with Student's t-test for continuous variables or a chi-square test for categorical data. DFS and OS were analyzed using the Kaplan-Meier survival method. The Cox proportional hazards model was used for univariate and multivariate analyses to identify the independent prognostic factors for DFS and OS. Statistical analyses were carried out with SPSS 22.0 software. A p value of less than 0.05 was considered to be statistically significant, and robust estimates of the standard error were used in all regression analyses. 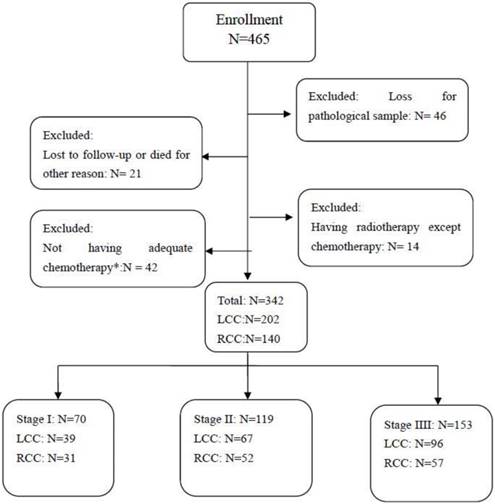 All the patients underwent radical resection via either traditional surgery or laparoscopic colectomy. Patients with stage I and low-risk stage II disease did not receive adjuvant therapy after surgery. Patients with high-risk stage II disease, defined as those with poor prognostic features, and stage III disease, were treated with adjuvant chemotherapy comprising an infusion of fluorouracil (5-FU), leucovorin (LV), and oxaliplatin (FOLFOX) (n=69, 20.2%) or oral capecitabine and an infusion of oxaliplatin (Xelox) (n=173, 50.6%). Overall, 87 (45.6%) patients received 4 cycles chemotherapy, and 104 (54.4%) patients received 4-8 cycles chemotherapy.

Patients in stage I, II and III between the RCC and LCC groups were well balanced with regard to gender, age, tumor grade, subtype, histological type, T-stage, N-stage, chemotherapy regimen and chemotherapy cycle. The characteristics of patients with stage I disease are shown in Table 1. Overall, 55.7% (n=39) and 44.3% (n=31) of the patients were in the LCC and RCC arms, respectively. The DFS and OS of stage I patients are presented in Figure 2, with no significant differences observed between the two arms.

Disease-free Survival (A) and Overall Survival (B) of Patients with Left- and Right sided Colorectal Cancer in Stage I.

Disease-free Survival (A) and Overall Survival (B) of Patients with Left- and Right sided Colorectal Cancer in Stage II.

Disease-free Survival (A) and Overall Survival (B) of Patients with Left- and Right sided Colorectal Cancer in Stage III.

The impact of primary tumor location on the prognosis of patients with colorectal cancer has long been a concern [14-16], but studies have reported conflicting conclusions [17]. A recent meta-analysis that included 15 studies demonstrated that patients with right-sided colon cancer had inferior OS (HR=1.14) compared with those with left-sided colon cancer [18]. Karim et al. [16] analyzed data from 6365 patients and found no difference in long-term survival between RCC and LCC patients. Warschkow et al. [12] noted that patients with LCC had a higher risk of mortality than those with RCC across all stages.

The univariate and multivariate analyses performed in our study indicated that gender and tumor grade were progression factors in OS, and TNM stage was associated with DFS and OS. Similarly, Valentine et al. [21] and Warschkow et al. [12] indicated that age, marital status and TNM stage were associated with survival. The specific mechanism underlying the different prognoses between RCC and LCC is still unclear, although studies have stated that LCC and RCC are two distinct diseases [12, 22].

Recent genetic studies have revealed distinguishable genomic patterns between LCC and RCC, including differences in microsatellite instability (MSI), chromosome instability (CIN), and CpG island methylator phenotype (CIMP) [23, 24]. Accumulating evidence has demonstrated that MSI is an independent predictor of survival and is predominantly seen in right-sided colon cancer, while MSI-H is suggested to contribute to RCC carcinogenesis [25, 26]. CIN results from abnormal structure or number of chromosomes, which leads to a series of genetic changes. Accordingly, CIN contributes to approximately 75% of LCC and 30% of RCC [22, 27]. CIMP has also been suggested to contribute to RCC carcinogenesis and has been found to be an independent risk factor for poor prognosis in colorectal cancer patients [28, 29]. Certainly, more sophisticated molecular classifications are needed to reveal the progression differences between patients with LCC and RCC.

One limitation of the current study is that the study is retrospective in design. Another is that the study includes only patients from a single institution, and thus, the number of patients enrolled may be not sufficient. Moreover, the follow-up duration of the study may be not sufficiently long. The confounding factors of various treatments related to outcome could not be fully evaluated. Therefore, further research with a large population is needed to evaluate the relationship between tumor location and prognosis for patients with colorectal cancer. In addition, more genetic studies are needed to further investigate the mechanism underlying the progression differences between LCC and RCC.

Availability of data and material

The datasets used and/or analyzed during the current study are available from the corresponding author on reasonable request.

XC and DG acquired and analyzed the data and drafted the manuscript. MC made contributions to patient follow-up. All authors read and approved the final manuscript.

All procedures performed in studies involving human participants were in accordance with the ethical standards of the institutional and/or national research committee and with the 1964 Helsinki declaration and its later amendments or comparable ethical standards. This study was approved by the Regional Ethics Committee of the First Affiliated Hospital of Wenzhou Medical University.

Written, informed consent was obtained from each patient prior to publication.

The authors declare that they have no conflict of interest

Dr. Congying Xie is a professor who has engaged in tumor research for more than 10 years. She obtained her medical degree in 2012. Her current research interests are in esophageal cancer, colorectal cancer and lung cancer. She was invited to give a speech at the IASLC 18th world conference on lung cancer (WCLC) in 2017.