A number of biomaterials have been developed, some of which already enjoy widespread clinic use. We have devised a new honeycomb tricalcium phosphate (TCP) containing through-and-through holes of various diameters to control cartilage and bone formation. However, the way in which the geometric structure of the honeycomb TCP controls cartilage and bone tissue formation separately remains unknown. In addition, an association has been reported between bone formation and angiogenesis. Therefore, in the present study, we investigated the relationship between angiogenesis and various hole diameters in our honeycomb TCP over time in a rat ectopic hard tissue formation model. Honeycomb TCPs with hole diameters of 75, 300, and 500 μm were implanted into rat femoral muscle. Next, ectopic hard tissue formation in the holes of the honeycomb TCP was assessed histologically at postoperative weeks 1, 2, and 3, and CD34 immunostaining was performed to evaluate angiogenesis. The results showed that cartilage formation accompanied by thin and poor blood vessel formation, bone marrow-like tissue with a branching network of vessels, and vigorous bone formation with thick linear blood vessels occurred in the TCPs with 75-μm, 300-μm, and 500-μm hole diameters, respectively. These results indicated that the geometrical structure of the honeycomb TCP affected cartilage and bone tissue formation separately owing to the induced angiogenesis and altered oxygen partial pressure within the holes.

In recent years, the progression of regenerative medicine has led to the development of various materials. During this process, stem cells, growth factors, and the extracellular matrix (ECM) constitute the elements needed for cell growth and differentiation1-5. In addition, it has recently come to be believed that trophic resources (e.g., vessels) and dynamic elements (e.g., mechanical stress) play an important role in cell growth and differentiation6,7. Mesenchymal or induced pluripotent stem cells are often used as the stem cell element, and bone morphogenetic protein-2 (BMP-2), among others, is widely used as a growth factor. Furthermore, in research focusing on the ECM, artificial biomaterials composed of various materials have been researched and developed to reproduce the extracellular microenvironment and induce tissue formation and cell growth and differentiation8-12.

In recent years, angiogenesis has been found to be important for appropriate bone formation as it supplies cells, oxygen, nutrients, and cytokines to osteoblast progenitor cells; thus, bone formation is thought to occur in conjunction with angiogenesis.18.

A total of 14 4-week-old healthy male Wister rats were used in this experiment. All experiments were performed in accordance with Okayama University's Policy on the Care and Use of the Laboratory Animals and approved by the Animal Care and Use Committee. All surgical procedures were performed under general anesthesia in a pain-free state.

Honeycomb TCP was pressed in a cylindrical mold with a depth of 5 mm containing through-and-through holes with diameters of 75 μm (75TCP), 300 μm (300TCP), and 500 μm (500TCP). Each TCP was calcinated by heating to 1200 °C (Fig. 1). Details of TCP manufacturing method have been described previously16.

For histological observations, the implanted TCPs were removed after 1, 2, and 3 weeks and fixed in neutral buffered formalin. Next, the specimens were decalcified in 10% ethylenediaminetetraacetic acid for 2 weeks and then embedded in paraffin. Finally, sections were stained with hematoxylin-eosin (HE) and observed histologically.

In the present study, rabbit polyclonal anti-CD34 antibody (Abcam, Tokyo, Japan) was used as a vascular endothelial marker. CD34 is a cell-surface glycoprotein known to have the ability to differentiate into all blood and endothelial cells. For that reason, the presence of CD34 was investigated.

The honeycomb TCP structure used in this experiment. 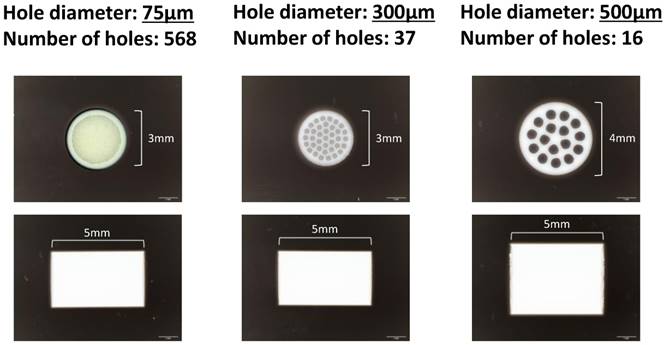 CD34 immunostaining was carried out as follows. The sections were deparaffinized in a series of xylene solutions for 15 min and then rehydrated in graded ethanol solutions. Endogenous peroxidase activity was blocked by incubating the sections in 0.3% H2O2 in methanol for 30 min. Antigen retrieval was performed in 0.01 mol/l citrate buffer (pH 6.0) for 1 min. After incubation with normal serum, the sections were incubated overnight with primary antibodies at 4 °C. Tagging of primary antibodies was achieved by the subsequent application of anti-rabbit IgG (ABC kit; Vector Laboratories, Inc., Burlingame, CA, USA). Immunoreactivity was visualized using a diaminobenzidine (DAB)/H2O2 solution (Histofine DAB substrate; Nichirei, Tokyo, Japan), and slides were counterstained with Mayer's HE (Merck KGaA, Darmstadt, Germany).

To quantify the hard tissue area, hard tissue formation was measured in five areas chosen from randomly selected regions in HE-stained specimens (200× magnification, n=4) using Image J software (NIH, Bethesda, MD, USA). In each field, we measured the total area of bone or cartilage formation in TCP holes and the area of TCP holes and we calculated the ratio of area of bone or cartilage area in TCP holes to determine the average of the 5 fields. The obtained average value was compared in each group, the rate of bone formation and cartilage formation were compared for different pore size. To evaluate angiogenesis in the TCP holes of various diameters, vessel number counts per a TCP hole, vessels area measurements in TCP holes in a manner similar to that of the hard tissue, and average vessel thicknesses were evaluated in a TCP hole.

Histological findings in 75TCP over time

At 1 week, cell penetration was seen at the entrance of the 75TCP holes, and small blood vessels were observed penetrating into the pores (Fig. 2a). At 2 weeks, fibrous connective tissue was observed to be filling the holes to the center; however, no hard tissue formation was seen (Fig. 2b). At 3 weeks, chondrogenesis which was positive of Toluidine blue staining was observed to be filling the TCP holes, and angiogenesis was poor compared with that seen at 2 weeks (Fig. 2c).

Histological findings in 300TCP over time

Histological findings in 500TCP over time

At 1 week, in 500TCP holes, as in the case of 300TCP, infiltration of fibrous connective tissue and cells was observed in about one-third of the area from the entrance of the TCP holes. In the vicinity of the entrance, island-shaped cartilage tissue and cartilage formation attached to the walls of the TCP were observed; woven bone formation was also observed in the part following the cartilage matrix which was Toluidine blue staining positive. Moreover, thick straight blood vessel invasion compared with 300TCP was observed (Fig. 2g). At 2 weeks, the proliferation of fibrous connective tissue and the invasion of thick linear blood vessels were observed around the central part of the TCP, and bone formation was found around the thick blood vessels (Fig. 2h). At 3 weeks, 500TCP showed a similar pattern of bone formation as 300TCP. In addition, numerous newly cancellous bone tissues were found; however, no bone marrow-like tissues were found in the area surrounded by these bone tissues (Fig. 2i). 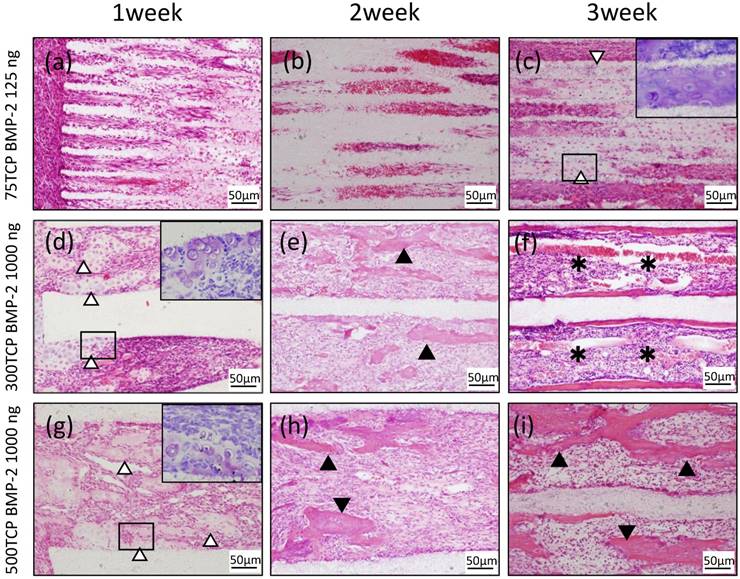 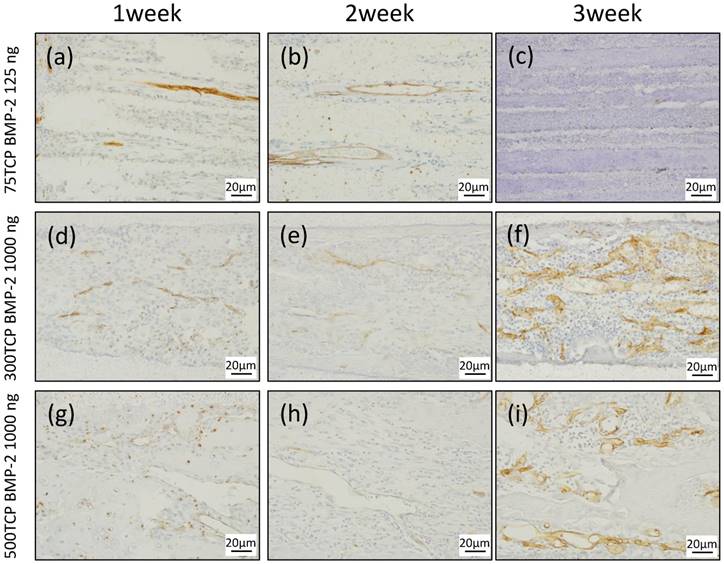 We investigated the dynamics of blood vessels entering the TCP over time using CD34 immunostaining.

At 1 week, multiple vascular invasions were observed in the vicinity of the 300TCP hole entrances (Fig. 3d). At 2 weeks, vascular invasion was observed around the central part, along with a branching network of blood vessel formation (Fig. 3e). At 3 weeks, blood vessels similar to sinusoidal vessels were observed in the bone marrow-like structures formed within the TCP holes (Fig. 3f).

At 1 week, a thick formation of vascular invasion was observed in the vicinity of the 500TCP hole entrances (Fig. 3g). At 2 weeks, a plurality of thick rectilinear blood vessels penetrating into the central part of the TCP holes was observed (Fig. 3h), and at 3 weeks, a pattern of blood vessel invasion similar to that at 2 weeks was seen (Fig. 3i).

Quantitative examination of hard tissue and vessels. formation in TCP 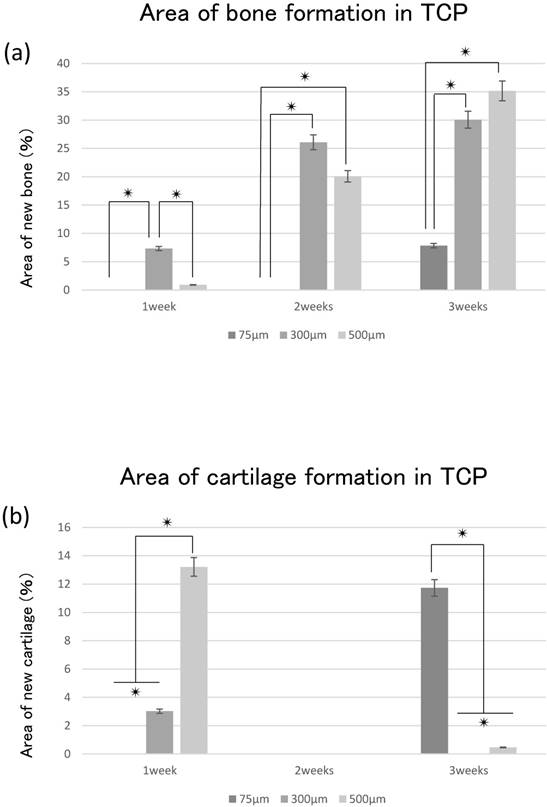 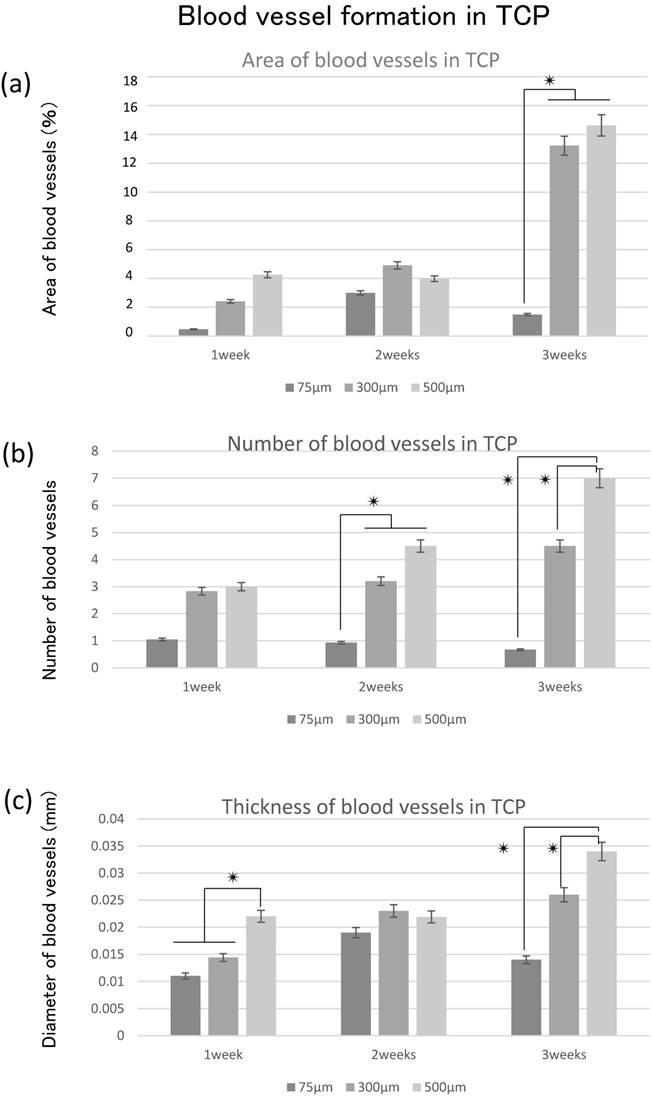 Stem cells, scaffolds, and growth factors are important for tissue regeneration, and normal tissue regeneration does not occur when any of these elements are missing1-5. Among these elements, artificial biomaterials (scaffolds) provide the environment for cell growth and differentiation. In addition, ideal artificial biomaterials must have an affinity for living tissue, a structure that cells are likely to invade, and tissue solubility19.

As a result of CD34 immunostaining, the formation of vascular lumens penetrating the TCP holes was observed in 300TCP and 500TCP. Blood vessel formation is important for not only tissue regeneration, but also bone tissue formation20,21. The results of the present experiment also suggested that angiogenesis exerts a substantial influence on bone tissue formation. The invasive blood vessel formation pattern in 300TCP was different from that in 500TCP, which showed the same linear angiogenesis. The reason for this was thought to be the geometric structure of TCP, which influenced the shape of the invasive blood vessels and affected bone formation. Therefore, the results of the present study suggest that the formation of invasive blood vessels was controlled by the pore size of the honeycomb TCP. In addition, the differences in hard tissues formation were thought to be the result of differences in oxygen partial pressure caused by differences in the shape of blood vessels influenced by the geometrical structure of the TCP. Bassett et al.22 reported that when mesenchymal stem cells were cultured under various conditions, the precursor cells differentiated into osteoblasts when cultured under high oxygen partial pressure, and into chondrocytes otherwise. The differentiation of the precursor cells was therefore considered to be determined by the environment in which the progenitor cells were placed, particularly in terms of oxygen partial pressure. It has long been known that bone marrow is in a hypoxic environment, and changes in oxygen concentration have been shown to affect the hematopoietic mechanism23,24.

In the present study, 500TCP induced vigorous osteogenesis with linear thick blood vessel invasion and 300TCP induced bone marrow formation with fine reticulated vessel invasion, respectively. On the other hand, cartilage formation with narrow blood vessel invasion was observed in 75TCP. Therefore, cartilage, bone marrow, and bone formation occurred in relation to angiogenesis in the TCP holes (in the order of 75TCP, 300TCP, 500TCP), that is, in accordance with decreased oxygen partial pressure. These findings suggest that controlling blood vessel invasion into TCP structures may control the pattern of hard tissue formation. The geometrical structure of the TCP holes with various pore sizes reflected the oxygen partial pressure of the bone, bone marrow, and cartilage tissue environments in the living body, and it appears that these kinds of environments were reproduced by the honeycomb TCP. By changing the pore sizes of the honeycomb TCP, it was possible to reproduce the optimal environment for the desired regeneration of hard tissue.

Our results indicated that angiogenesis decreased at 3 weeks in 75TCP. Chondromodulin produced from chondrocytes contributes to normal cartilage formation by blocking blood vessel invasion25. Therefore, chondromodulin secreted from the cartilage tissue filling the holes in 75TCP inhibited angiogenesis and preserved cartilage tissue in 75TCP. In addition, since BMP-2 has been reported to be involved in cell aggregation and angiogenesis26,27, if the concentration of BMP-2 is low, so is the capacity for bone formation induced by angiogenesis. Therefore, 75TCP with a low concentration of BMP-2 is advantageous for cartilage formation.

The authors declare that they have no conflict of interest.

22. Bassett C, Herrmann I. Influence of oxygen concentration and mechanical factors on differentiation of connective tissues in vitro. Nature. 1961;190:460-461