Conclusions: Our study suggests possible roles of differentially expressed miRNAs in the pathogenesis of middle ear cholesteatoma. Targeting on these miRNAs may provide a new strategy for cholesteatoma therapy in the future.

Middle ear cholesteatoma is a benign keratinizing and hyper-proliferative squamous epithelial lesion that is locally destructive and frequently recurrent. It is usually associated with chronic otitis media, which gradually expands and results in destruction of nearby bony structures, causing conductive hearing loss, facial nerve paralysis, postauricular subperiosteal abscess, labyrinthine fistulae, bacterial labyrinthitis and intracranial complications such as meningitis, sigmoid sinus thrombophlebitis, extradural abscess, and brain abscess and so on. Middle ear cholesteatoma has been estimated to affect about 9.2 per 100,000 populations a year in Europe [1], and the recurrence after surgical removal is common. Consequently, there is an urgent necessity for developing non-surgical treatment alternatives, based on the molecular mechanisms. Unfortunately, to date, the exact cellular and molecular mechanisms underlying the pathogenesis in middle ear cholesteatoma still have not been thoroughly elucidated.

MicroRNA (miRNA) is a short non-coding RNA molecule that functions in post-transcriptional regulation of gene expression. They can initiate the protein translational repression by binding to their targeted messenger RNAs (mRNAs) at the 3'-untranslated regions. Recently, more and more researchers are paying attentions to miRNA expression profiling studies since miRNAs participate in a variety of cellular pathways, including cell proliferation, differentiation, apoptosis and so on [2]. So far, the abnormal expression of miRNAs have been discovered in the etiopathogenesis of various inflammatory proliferative diseases and neoplastic diseases, such as psoriasis [3], rheumatoid arthritis [4], dermatitis [5], nasopharyngeal carcinoma [6], tongue squamous cell carcinoma [7], and so on.

It has been hypothesized that the inflammatory process and cell cytokines and mediators released in this process contribute to the etiopathogenesis of middle ear cholesteatoma. Cytokines secreted in the inflammatory response may promote the aggressive growth of cholesteatoma keratinocytes and bone resorption through activating some biochemical signaling pathways, such as phosphatidylinositol 3-kinase (PI3K)- protein kinase B (Akt) and mitogen-activated protein kinase (MAPK) signaling pathways [8]. Recently, some miRNAs have been demonstrated to act crucial biological functions in the hyper-proliferation of cholesteatoma keratinocytes, such as miRNA-21 [9] and miRNA-802 [10]. For example, miRNA-21 suppresses phosphatase and tensin homologue (PTEN) and programmed cell death 4 (PDCD4) translation and leads to cholesteatoma keratinocyte hyper-proliferation [9]. Nevertheless, there is a lack of miRNAs expression profiling analysis in acquired middle ear cholesteatoma.

In this study, we compared the miRNA expression profiling between acquired middle ear cholesteatoma and normal skin (from incision either endaural or postauricular) by miRNA microarray technology, and validated selected miRNAs using quantitative real-time polymerase chain reaction (qRT-PCR), aiming to identify several novel miRNAs which may be involved in the etiopathogenesis of middle ear cholesteatoma.

Acquired middle ear cholesteatoma tissue specimens were collected from 20 patients who underwent surgical treatment for middle ear cholesteatoma from August 2016 to March 2017 at the Department of Otolaryngology Head and Neck Surgery, The Second Xiangya Hospital of Central South University. Meanwhile, 15 normal skin samples (from incision either endaural or postauricular) were obtained to be used as controls. Middle ear cholesteatoma and normal skin samples were immediately preserved in liquid nitrogen for RNA microarray or validation. The study was approved by the Ethics Committee of The Second Xiangya Hospital of Central South University on October 10, 2014 (Number: 2014114), and informed consents were obtained from all patients.

MiRNAs expression profiling was conducted through the usage of the miRCURYTM locked nucleic acid (LNA) microarray platform (Exiqon, Denmark). After quality control, miRNA labelling was performed by applying the miRCURY™ Power labeling kit (Exiqon, Denmark) according to the manufacturer's guideline. Firstly, 1μLRNA in 2.0 μL of water was combined with 1.0 μL of calf intestine phosphatase (CIP) buffer and CIP (Exiqon, Denmark). The mixture was incubated for 30 min at 37°C. Then, the reaction was terminated by incubation for 5 min at 95°C. Subseqently, the mixture was combined with 3.0 μL of labeling buffer, 1.5 μL of fluorescent label (Hy3TM), 2.0 μL of DMSO, 2.0 μL of labeling enzyme. The labeling reaction was incubated for 1 h at 16°C. Then, after incubation for 15 min at 65°C, the labeling reaction was terminated. Hybridization was followed by the labeling procedure. In detail, the Hy3™-labeled samples were hybridized on the miRCURYTM LNA Array (Exiqon, Denmark) according to manufacturer's guideline. A mixture of 25 μL Hy3™-labeled samples and 25 μL hybridization buffer were firstly denatured for 2 min at 95°C, incubated on ice for 2 min, and then hybridized to the microarray for 16-20 h at 56°C in Nimblegen Systems (Madison, USA, http://www.nimblegen.com, RRID: SCR_008571). Consequently, the hybrid chips were achieved, and were washed with Wash buffer kit (Exiqon, Denmark). Finally, the Axon GenePix 4000B microarray scanner (Axon, USA) was used to scan the hybrid chips.

Clinical characteristics for the 20 patients with middle ear cholesteatoma were as follows. Of these 20 patients with middle ear cholesteatoma, 13 (65%) were male, and 7 (35%) were female. Patients varied in age from 13 to 59 years old, with a mean age of 32.5 years old. Meanwhile, the course lasted from 1 month to 40 years, with a mean duration of 12.6 years. Totally, 15 right ears and 5 left ears were included.

Differential expression of miRNAs in cholesteatoma and normal skin

To validate the miRNAs microarray results, qRT-PCR analysis of 15 cholesteatoma samples and 10 normal skin samples was conducted for part of differentially expressed miRNAs, including 4 upregulated miRNAs (miRNA-21-3p, miRNA-16-1-3p, miRNA-584-5p, miRNA-338-5p) and 1 downregulated miRNAs (miRNA-10a-5p). The qRT-PCR validation was accordance with the microarray results partly: miRNA-21-3p and miRNA-16-1-3p expressed significantly higher (P=0.000 and P=0.000, respectively) while miRNA-10a-5p exhibited an obviously decreased expression (P=0.000) in middle ear cholesteatoma tissues when compared with normal skin. However, an increased expression of miRNA-584-5p (P=0.431) and decreased expression of miRNA-338-5p (P=0.465) were demonstrated with no statistical significance (Figure 4).

Volcano plot of microarray data. Plot showed differences between middle ear cholesteatoma and normal skin. Differentially expressed miRNAs with a fold change ≥ 2 and P<0.05 between the two groups were showed in red. 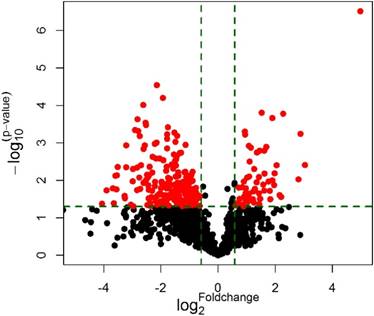 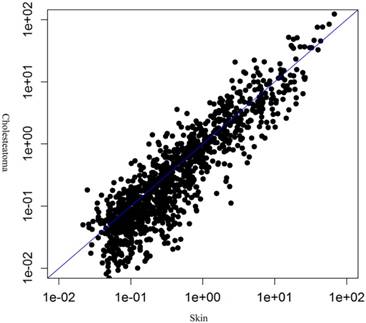 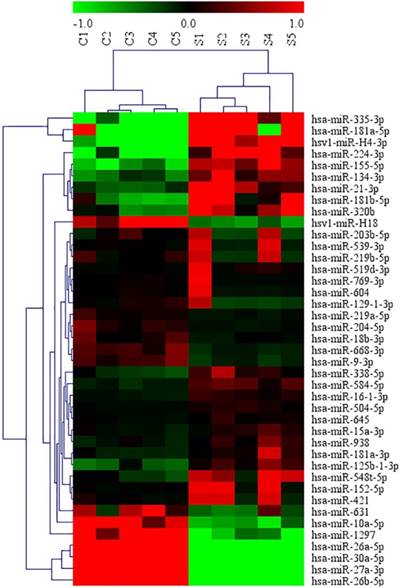 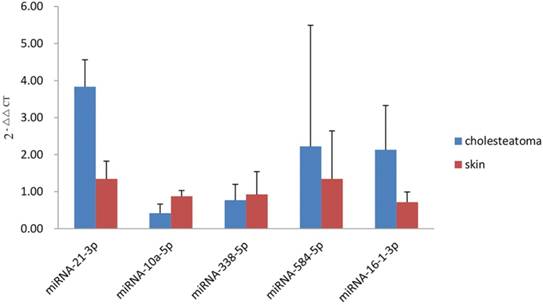 Venn diagram of target genes for candidate miRNAs. TargetScan and miRDB dababases were applied to predict target genes. The number in the intersection indicated there were 1058 target genes in total predicted by using these two databases together. 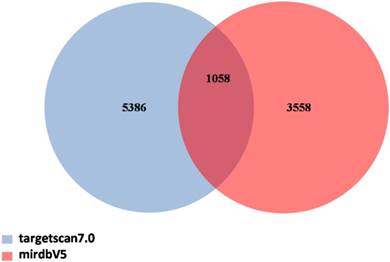 To further explore the potential functions of 19 differentially expressed miRNAs underlying biological processes in the etiopathogenesis of middle ear cholesteatoma, GO classification and pathway analysis were performed on presumptive target genes of these 19 miRNAs. The GO classification was grouped into 3 categories: molecular function, biological process and cellular component. In our study, regarding on molecular function, target genes were classified into 153 categories, playing roles in protein serine/threonine phosphatase inhibitor activity, glucocorticoid receptor binding, activin binding, and so on. While based on biological process, these target genes totally participated in 831 biological processes, including regulation by virus of viral protein levels in host cell, negative regulation of bone resorption, histone mRNA catabolic process, and so on. Moreover, categories on cellular component revealed that most target genes act as a portion of several complexes, such as Set1C/COMPASS complex, PRC1 complex, ESC/E(Z) complex, and so on (Figure 6). Additionally, the KEGG pathway analysis displayed that the putative target genes were involved in 39 signaling pathways totally, including p53 signaling pathway, PI3K-Akt signaling pathway, osteoclast differentiation, and so on (Figure 7). 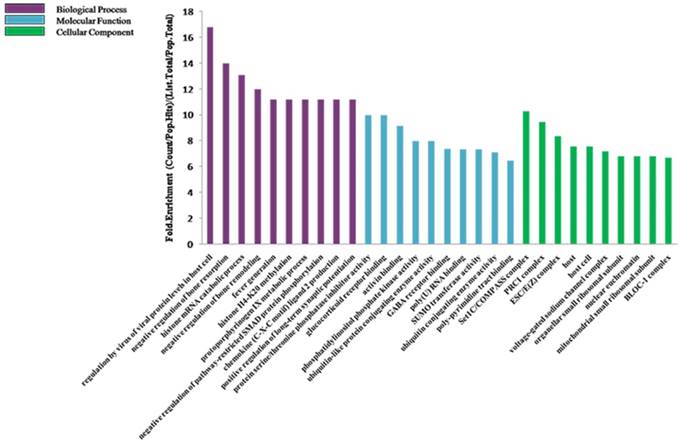 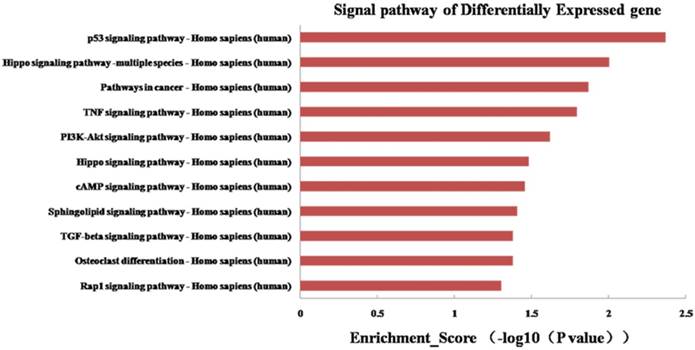 MiRNAs are endogenous non-coding small RNAs (containing about 20-25 nucleotides) found in animals, plants and viruses which play essential roles in post-transcriptional regulation of gene expression through targeting mRNAs [11]. In the current study, the miRNA microarray analysis was adopted to investigate the miRNA expression profiling in middle ear cholesteatoma. We totally identified 44 upregulated and 175 downregulated miRNAs in cholesteatoma tissues with statistical significance compared with normal skin. All these differentially expressed miRNAs are likely to significantly impact on gene expressions of middle ear cholesteatoma. Furthermore, to verify the microarray discoveries, qRT-PCR was conducted to detect the expression of 5 selected miRNAs, including 4 upregulated miRNAs (miRNA-21-3p, miRNA-16-1-3p, miRNA-584-5p, miRNA-338-5p) and 1 downregulated miRNAs (miRNA-10a-5p). The expression of miRNA-21-3p, miRNA-16-1-3p and miRNA-10a-5p was accordance with the microarray data, indicating that these three miRNAs might make great contribution to the etiopathogenesis of middle ear cholesteatoma. The discrepancy of expression of miRNA-584-5p and miRNA-338-5p between qRT-PCR validation and microarray analysis might result from the false positive results from microarray analysis. Moreover, a validation with a large sample size will be conducted in our further study.

In fact, researches on miRNA functions in the etiopathogenesis of middle ear cholesteatoma are rare so far, and the current researches mainly focus on miRNA-21, miRNA let-7a, and miRNA-802. Friedland et al. and Chen et al. [12, 13] detected the potential role of miRNA-21 in regulating growth and proliferation in acquired cholesteatoma. They postulated that the up-regulation of miRNA-21 could lead to suppression of PTEN and PDCD4, resulting in cholesteatoma keratinocytes proliferation and invasion. Similarly, Chen et al. [14] demonstrated that miRNA-21 was able to promote the proliferation and invasion of cholesteatoma keratinocytes. Consistent with the previous studies, the microarray data in our study showed that miRNA-21-3p was significantly upregulated with an average 7.03-fold change in cholesteatoma tissues compared with normal skin. Additionally, Chen et al. [13] found that miRNA let-7a was highly expressed in cholesteatoma tissues compared with normal skin especially in paediatric patients. However, the microarray data in our study demonstrated that the expression of miRNA-let-7a-3p and miRNA-let-7a-5p showed no statistical significance between cholesteatoma tissues and normal skin.

Middle ear cholesteatoma is characterized with bone resorption of the ossicular chain and bony labyrinth, which may result in hearing loss, vestibular dysfunction, facial paralysis, labyrinthine fistulae and intracranial complications. So far, the exact mechanism of bone resorption in cholesteatoma still remains unexplained. In the current study, GO classification revealed that differentially expressed miRNAs participated in negative regulation of bone resorption and remodeling biological processes, shedding light on the potential of miRNAs to be regarded as therapeutic targets in cholesteatoma. Recently, a majority of researchers hold the view that the osteoclast acts as a terminal function cell in the bone resorption process. The activation and maturity of osteoclast play a key role in the bone resorption and remodeling of middle ear cholesteatoma [15]. The KEGG pathway analysis in our study exhibited an involvement of osteoclast differentiation signaling pathway, indicating that miRNAs possessed the possibility of regulating bone resorption in cholesteatoma. Moreover, the regulatory function of miRNAs has been confirmed in some osteolytic diseases. Previous discoveries showed that osteoclasts were able to secrete miRNAs that modulated osteolytic tumor growth [16]. For instance, osteoclasts could secrete miRNA-21 that promoted tumor cell proliferation [17] and miRNA-378 that enhanced tumor growth, angiogenesis and cell survival [18]. Also, miRNA-338-3p was demonstrated to repress glucocorticoid-induced osteoclast differentiation and bone resorption through targeting on receptor activator for nuclear factor-κB ligand (RANKL) [19].

The authors declare that they have no conflict of interest.