Autophagy is a catabolic process that degrades damaged cellular proteins and organelles. It is essential for maintaining cellular homeostasis[1]. However, prolonged and excessive autophagy is maladaptive and can result in cell death[2]. Hypertrophic cardiomyocyte growth and dysfunction are associated with various forms of heart diseases, such as hypertension and coronary heart disease[3, 4]. Recently, accumulating evidence has revealed a tight link between cardiomyocyte autophagy and cardiac hypertrophy[5]. Excessive autophagy can occur in hypertrophied cardiac myocytes[6]. Thus, therapeutic strategies targeting autophagy for cardiac hypertrophy are attractive.

Hydroxymethylglutaryl coenzyme A reductase inhibitors (statins) have been shown to reduce cardiovascular-related mobility and mortality independently of their cholesterol-lowering function [7]. Simvastatin, a statin, has been shown to have pleiotropic effects, such as reducing cardiac hypertrophy [8, 9]. However, the effects of simvastatin on autophagy in the hypertrophied heart have not been clearly documented thus far.

Members of the 14-3-3 protein family regulate signal transduction, apoptosis, and checkpoint control pathways[10]. These proteins have been shown to modulate autophagy in cancers[11-13]. Recently, 14-3-3 proteins were indicated to play important roles in cardiomyocytes. Dominant-negative 14-3-3 promotes cardiac apoptosis [14]. 14-3-3 protects against diabetic cardiomyopathy [15]. Additionally, the 14-3-3γ protein attenuates lipopolysaccharide- induced cardiomyocyte injury through the Bcl-2 family pathway[16] and has a protective role against mitochondrion-mediated cardiomyocyte apoptosis [17]. Most previous studies were focused on the role of 14-3-3 in the diabetic heart, and less attention has been paid to the effects of the protein on cardiac hypertrophy.

The experimental protocol was implemented according to the tenets of the Declaration of Helsinki and the procedures involving animals were approved by the Animal Care and Welfare Ethics Committee of the Fourth Military Medical University (FMMU, Xi'an, China).

Male Sprague-Dawley (SD) rats were purchased from the Animal Center of the FMMU. Simvastatin was purchased from Merck, Sharp & Dohme Inc. Other chemicals were of laboratory grade. Forty rats (weight, 180-220 g; age, 9-12 weeks) were divided into four groups (n = 10): SHAM group, comprising rats in which surgery was performed without banding of the aorta; SHAM+SIM group, comprising SHAM rats treated with simvastatin (40 mg/kg·day); AAB group, comprising rats in which AAB was performed; and AAB+SIM group, comprising AAB rats treated with simvastatin 1 day before the AAB procedure. AAB was performed as previously described with minor modifications[18]. All rats were anesthetized with an intraperitoneal injection of 45 mg/kg pentobarbital sodium. In brief, after anesthetization, the rats were restrained and a midline abdominal incision was made under sterile conditions. The abdominal aorta above the renal arteries was dissected. A ligature (4-0 silk sutures) was positioned around the aorta along with a blunt 22-gauge needle, which was then withdrawn, leading to constriction (approximately 50%) of the aorta. After surgery, each rat received 30 kU penicillin intramuscularly as antibiotic therapy. Simvastatin was dissolved in 0.9% saline solution. The rats received placebo (0.9% saline solution) or simvastatin intragastrically every day for 7 weeks before surgery.

Adult rat ventricular cardiomyocytes were isolated as reported previously[20]. In brief, the rats were anesthetized with pentobarbital sodium 45mg/kg and the hearts were quickly removed from the chest; thereafter, retrograde aortic perfusion with a Ca2+-free bicarbonate-based buffer was performed at 37°C for 3 min. Enzymatic digestion was then initiated until the heart became swollen. The left ventricle was rapidly removed 5-10 min later, cut into several chunks, and further digested in a shaker for 10 min. The supernatant containing the dispersed myocytes was filtered, centrifuged at 500 rpm for 1 min , and re-suspended. Finally, the cardiomyocytes were plated on laminin-coated glass coverslips before measurements.

Confocal microscopy was used to detect 14-3-3 expression in adult rat cardiomyocytes as described previously [21]. Briefly, adult rat cardiomyocytes were isolated and plated on laminin-coated 4-well chamber slides (Lab-Tek). Expression of the 14-3-3 protein was detected using a primary mouse antibody (Santa Cruz, 1:100), and α-sarcomeric actinin was detected using a rabbit antibody (Sigma-Aldrich, 1:100). The secondary antibodies used were Alexa Fluor 594-labeled goat anti-mouse antibody and Alexa Fluor 488-labeled goat anti-rabbit antibody (Invitrogen, 1:500), and the mounting medium contained DAPI (Vector Laboratories). A Carl Zeiss 710 confocal microscope with ZEN software was used for visualizing 14-3-3, α-actinin, and DAPI. Total laser intensity and photomultiplier gain were constant for all the groups and settings, and data were verified by two independent observers who were blinded to the experimental group. A minimum of three coverslips was used for each experimental group, and at least three cell images were acquired from each coverslip.

The autophagy flux was measured as described previously[2, 21]. In brief, the NRCs were plated on coverslips and infected with an mRFP-GFP-LC3 lentivirus (Hanbio. Co. LTD, Shanghai, China) at a multiplicity of infection of 8. The NRCs were exposed to the virus overnight, after which media were aspirated and fresh media were applied. Then the NRCs were subjected to different treatments and fixed with paraformaldehyde in phosphate-buffered saline (PBS). After rinsing with PBS, the cells were permeabilized with 0.3% Triton X-100 in 10% normal goat serum blocking solution (Invitrogen, Life Technologies) for 60 min. Coverslips were mounted on slides with Hardset anti-fade mounting medium (Vector Laboratories), and confocal imaging was performed as described above (mRFP 594 nm ex., 667 nm em.; GFP 488 nm ex., 543 nm em.). The puncta of six cells in each experimental group were counted after obtaining digital images. The number of yellow puncta in the merged channel represented the number of autophagosomes. The number of autolysosomes (as a result of autophagosome-lysosome fusion) was represented by the number of red puncta.

Data are presented as the mean ± SEM. One-way ANOVA was used for statistical analysis and P<0.05 was considered statistically significant. 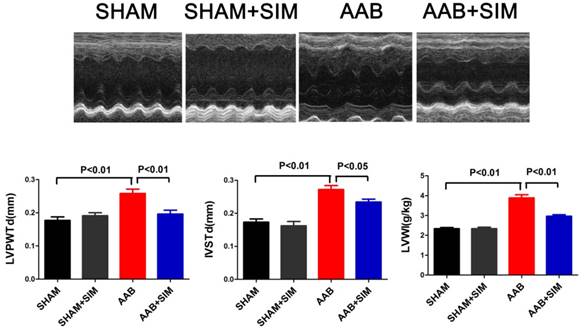 Simvastatin inhibited autophagy and preserved 14-3-3 expression in the myocardium of AAB rats. A, Representative western blots of proteins in the myocardium of the SHAM (n=3), SHAM+SIM (n=3), AAB (n=3), and AAB+SIM (n=3) groups. B-D, Quantitative analysis of 14-3-3, LC3, and p62 proteins levels in different groups respectively. β-Actin served as the loading control and data were normalized to the protein level measured under SHAM conditions. 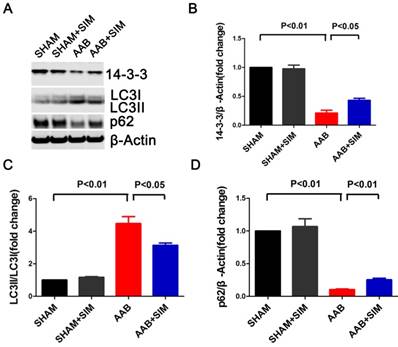 To confirm if simvastatin could manipulate 14-3-3 in NRCs when the cells were exposed to AngII, we measured the 14-3-3 protein level. As seen in Figure 4, AngII effected a significant decrease in 14-3-3 protein expression (0.17±0.02-fold change; P<0.01), whereas simvastatin substantially increased the protein level of 14-3-3 (0.87±0.03 fold change; P<0.01). The result was consistent with the results obtained in vivo, supporting the hypothesis that simvastatin could increase the level of 14-3-3 during cell stress induced by AngII. Interestingly, rapamycin, the activator of autophagy, directly decreased the protein level of 14-3-3 (0.24±0.03-fold change) compared to that in the CTRL group (Figure 4).

The beneficial effects of statins are far greater than those associated with cholesterol lowering alone, and they appear to afford cardiovascular protection at multiple levels, primarily as a result of their pleiotropic activity[27]. Simvastatin, a statin, has been shown to reduce cardiovascular-related morbidity and mortality independently of its cholesterol-lowering function in clinical trials. In our previous study, we reported that simvastatin inhibited AAB-induced left ventricular hypertrophy, which is an independent predictor of cardiovascular morbidity and mortality[9, 28]. Although it has been reported that statins inhibited autophagy by regulating the mTOR signaling pathway in diabetes [29], few studies have investigated whether simvastatin can regulate autophagy in cardiac hypertrophy. In the present study, simvastatin blunted left ventricular hypertrophy and reduced excessive autophagy, characterized by a high LC3 II/LC3I ratio and low p62 level in the myocardium of AAB rats. In addition, we found that 14-3-3 protein level significantly decreased in the myocardium of AAB rats. We also showed that simvastatin partially preserved 14-3-3 protein level in AAB rats. The present study indicates that 14-3-3 may be involved in the pleiotropic effects of simvastatin on hypertrophy, which is consistent with a previous study showing that 14-3-3 inhibits cardiomyocyte hypertrophy[24, 30]. In addition, as 14-3-3 inhibits autophagy in cancer cells, it may play a role in inhibiting autophagy in cardiomyocytes. Thus, simvastatin may regulate 14-3-3 protein expression, which could inhibit excessive autophagy and protect the heart against hypertrophy.

Autophagy is important in the heart for maintaining homeostasis, as modest autophagy can recycle proteins and nutrients in cells whereas excessive autophagy may lead to extreme degradation of critical cellular proteins and organelles, leading to cell death [2]. In the present study, in order to confirm that the alterations in the markers of autophagy in the myocardium are consistent with the changes in NRCs, we measured LC3 and p62 protein levels in NRCs exposed to AngII, which can induce cardiomyocyte hypertrophy[31]. AngII increased the LC3II/LC3I ratio and decreased the p62 protein level significantly in NRCs. Simvastatin blunted the effects of AngII on autophagy in NRCs. Furthermore, we also used an LC3 reporter system to measure autophagy. The system takes advantage of the fact that LC3I is post-translationally modified by a ubiquitin-like system that converts it to its lapidated LC3II form. LC3II is sequestered into autolysosomes in which it is degraded[32]. It showed that both autophagosomes and autolysosomes were induced significantly by AngII in NRCs, indicating excessive autophagy occurred, which is consistent with previous findings [2]. Simvastatin decreased autophagosomes and autolysosomes in NRCs exposed to AngII. In addition, AngII reduced 14-3-3 protein and simvastatin partially preserved 14-3-3 protein in NRCs. These results are consistent with the results in vivo.

Another interesting observation was that rapamycin, an autophagy activator, not only activated excessive autophagy but also inhibited 14-3-3 protein expression in NRCs in the present study. While rapamycin inhibiting 14-3-3 in myocytes has not been reported, the finding is consistent with those of previous studies demonstrating that 14-3-3 inhibits autophagy in cancer cells[10] and rapamycin induces autophagy by removing the inhibitory effect of mechanistic target of rapamycin (mTOR) on autophagy induction[33]. Thus, it appears that rapamycin can also activate autophagy by regulating the 14-3-3 protein (Figure 6). 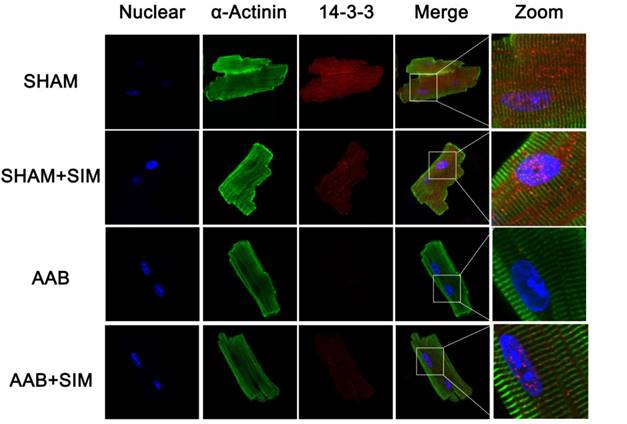 Despite successful efforts to prevent cardiac hypertrophy in different diseases, cardiac hypertrophy remains a major clinical problem that has failed to be influenced by multiple pharmacological approaches. The findings that simvastatin increased 14-3-3 expression and decreased excessive autophagy suggest that 14-3-3 and autophagy could serve as therapeutic targets for cardiac protection. Nonetheless, although increasing 14-3-3, inhibiting autophagy, or regulating both 14-3-3 and autophagy could protect cardiomyocytes against hypertrophy, these strategies have not resulted in medicines with safe therapeutic effects in vivo. Thus, mechanisms underlying the effects of statins on 14-3-3 and autophagy need to be evaluated. Hopefully, medicines that potentially modulate autophagy and 14-3-3 will be investigated for therapeutic purposes in the near future. 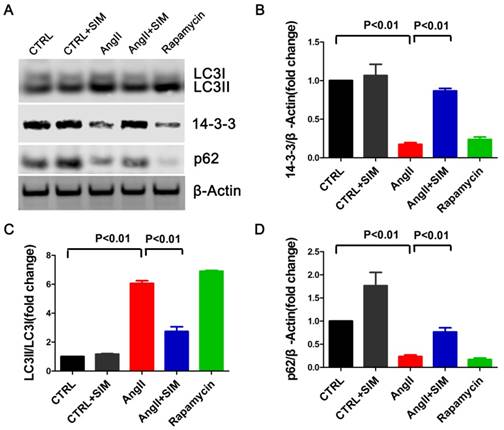 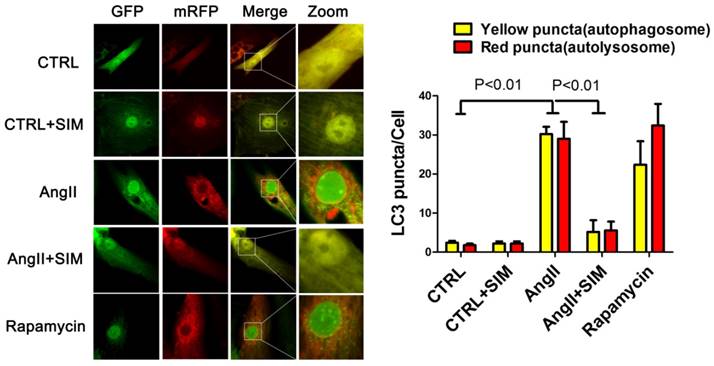 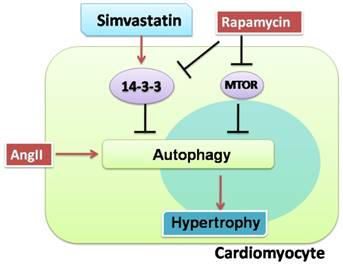 The present study was supported by the National Natural Science Foundation of China (Grant No. 81300077).