MicroRNAs, a class of short endogenous RNAs, acting as post-transcriptional regulators of gene expression, mostly silence gene expression via binding imperfectly matched sequences in the 3'UTR of target mRNA. MiR-17-92, a highly conserved gene cluster, has 6 members including miR-17, miR-18a, miR-19a, miR-20a, miR-19b-1 and miR-92a. The miR-17-92 cluster, regarded as oncogene, is overexpressed in human cancers. Lung cancer is the leading cause of death all over the world. The molecular mechanism of lung cancer has been partly known at the levels of genes and proteins in last decade. However, new prognosis biomarkers and more target drugs should be developed in future. Therefore, noncoding RNAs, especially miRNAs, make them as new potentially clinical biomarkers for diagnosis and prognosis. In this review, we focus the current progress of miR-17-92 cluster in lung cancer.

MicroRNAs (miRNAs), highly conserved small non-coding RNAs, cause degradation of target mRNAs or inhibition of translation by binding with 3'-untranslated regions (3'-UTR), thus regulate the expression of genes at the post-transcriptional level [1]. It has been found that there are a large number of miRNAs, often located in a polycistronic gene called miRNA clusters, which affect cell growth, cell cycle and cell differentiation through co-expression in different tissues. Additionally, they can participate in the occurrence and development of tumors as new oncogenes or tumor suppressor genes, then affect the recurrence and metastasis of tumors. A growing body of research shows that miRNAs participate in the development of lung cancer [2-4].

Lung cancer is the most common cancer in the world, whose incidence and mortality are among the top three. Lung cancer is divided into two main histological groups including non-small cell lung cancer (NSCLC, 85%) and small cell lung cancer (SCLC, 15%) [5]. NSCLC can be further subclassified into adenocarcinomas, squamous cell, large cell and bronchoalveolar carcinomas (BAC). NSCLC has slower cell proliferation and relatively late diffusion and metastasis comparing with SCLC [6]. The 5-year survival rate is only 17.4% after the diagnosis of lung cancer patients in the United States, while the average results in developing countries are even worse [7]. Till now, miR-17-92 cluster, is significantly up-regulated in various solid tumors and affects the development of tumors [8], especially in lung cancer. In this review, we focus the roles of miR-17-92 and advance in lung carcinogenesis.

Now more than 300 miRNA clusters are found in the human genome, including miR-183-96-182 cluster, miR-35-41 cluster, miR-17-92 cluster and so on. MiR-17-92 cluster is involved in the development of multiple organs in mammals and closely related to the development and occurrence of tumors, thus it receives widespread attention in the world [9]. The miR-17-92 cluster is a highly conserved gene cluster containing a polycistronic promoter, located on human chromosome 13q31.3 and the third intron of the C13orf25 gene [10], which is the first miRNA oncogene [11]. The precursor transcripts contain a tandem stem-loop hairpin structure, which ultimately produce mature miRNAs: miR-17, miR-18a, miR-19a, miR-19b-1, miR-20a and miR-92a [12]. The six miRNAs are divided into four groups based on their sequences compositions: miR-17 and miR-20, miR-18, miR-19, and miR-92 (Figure 1). Among them, miR-18 shares homology with the sequences of miR-17 and miR-20. The miR-17-92 cluster has two paralogous clusters: miR-106b-25 and miR-106a-363, which can be used to increase the complexity and diversity of miR-17-92 cluster in mammalian cells by gene duplication [13]. These two homologous clusters encode 15 different miRNAs, in which the miR-106b-25 cluster is located in the 13th intron region on human chromosome 7, encoding miR-106b, miR-93 and miR-25. The miR-106a-363 cluster is located on the X chromosome and encodes miR-106a, miR-18b, miR-20b, miR-19b-2, miR-92-2, miR-363. These miRNAs share similar highly conserved gene sequences with the miR-17-92 cluster. At the same time, the miR-17-92 cluster is overexpressed in various solid tumors, so it is regarded as 'Oncogene'.

The structure of miR-17-92 cluster 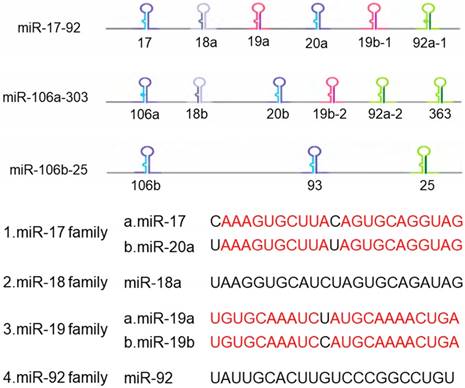 MiR-17-5p, the most prominent member in miR-17-92 cluster, is an essential regulator of fundamental cellular processes like proliferation, cell cycle, apoptosis, and autophagy, whose deficiency is lethal in the mouse. Large-scale miRNome analysis identifies miR-17-5p as an oncogene in tumors [40]. Moreover, serum miR-17-5p levels are inversely related to the survival of patients with lung cancer, that is, high levels correlated with shorter survival times [41]. In addition, inhibition of miR-17-5p by antisense oligonucleotides (ONs) can induce apoptosis selectively overexpressing miR-17-92 in lung cancer cells, suggesting the possibility of targeting an 'oncomiR addiction' to expression of these miRNAs in a subset of lung cancers. MiR-17-5p might also serve as a therapeutic target in lung cancer [42].

On the contrary, miR-17-5p is downregulated in NSCLC [43]. Moreover, downregulation of miR-17-5p upregulated BECN1, which resulted in apoptosis resistance of cancer cells via the treatment of paclitaxel [44]. In order to justify miR-17-5p can act as a tumor suppressor, a study proved that downregulation of miR-17-5p resulted in high expression of cyclin-dependent kinase inhibitor 1A (CDKN1A) and RAD21 cohesin complex component (RAD21) in cisplatin resistance of NSCLC [45]. In this case, miR-17-5p acts as a tumor suppressor.

Above all, miR-17-5p not only can act as an oncomiR, but also might also act as a tumor suppressor in lung cancer. The final effect of miR-17-5p seems to be highly context-dependent.

MiR-18a, as an oncogene, promotes the tumorigenesis and tumor angiogenesis [46, 47]. Besides, miR-18a promotes pathological angiogenesis by increasing VEGFA expression in hepatocellular carcinoma (HCC) [48]. In addition, some evidences have demonstrated that miR-18a promotes cell proliferation via stimulating CCND1 in oesophageal squamous cell carcinoma cells [49].

Previous study has already shown that upregulated miR-18a has a shorter survival in NSCLC patients [28]. In recent clinical studies, overexpression miR-18a is negatively associated with the clinical response of NSCLC via activating the serine/threonine-protein kinase 4 (STK4) pathway. Besides, miR-18a is also relevant to clinical tumor node metastasis (TNM) stage, tumor differentiation and regional lymph node metastasis (P < 0.005) [50]. Last but not least, our experimental data reveal miR-18a-5p can promote NSCLC by directly targeting IRF2 [3]. Further experiments indicated that IRF2 can promote cell apoptosis, inhibit cell proliferation and migration. Moreover, miR-18a-5p can active autophagy in NSCLC. Collectively, these results indicate that miR-18a-5p cannot only promote NSCLC via suppressing IRF2, but dysregulated miR-18a expression mediate oncogenes to affect tumorigenesis. It may be a convincing biomarker for the early detection of lung cancer [3].

MiR-20a can enhance cell proliferation and promote cell migration in various cancers, such as lung cancer, gastric cancer and hepatocellular carcinoma [56-58]. In addition, the upregulation of miR-20a promotes radio-resistance for NSCLC patients, which can be conductive to poor prognosis, as showed in other cancers [59, 60].

Likewise, previous reports have observed miR-17-5p and miR-20a target the transcription factor E2F1, a target of transcriptional regulator Myc-like (C-MYC) [61]. It is reported that all 3'UTR of E2Fs mRNA have miR-20a binding sites. Two functional E2F transcription factor binding sites are contained in the core promoter region of miR-17-92 cluster. E2Fs can directly activate transcription of miR-17-92 via binding the promoters and their effects similarly. However, miR-20a can reduce E2F1 expression, such a balance shift may be also contributed by MYC, which can trans activate E2Fs. E2Fs, MYC and miR-17-92 cluster together provide a complex regulatory for NSCLC cell proliferation and apoptosis [62-64].

It has been shown that miR-92a is also involved in the biology of tumors through a complex mechanism. Moderate overexpression of miR-92a causes a reduction of F-box and WD repeat domain containing 7 (FBXW7), resulting in cervical cancer proliferation and invasion [65]. In addition, according to the recent research, miR-92a plays an essential role in the development of colorectal cancer and may serve as a diagnostic and prognostic biomarker [66, 67]. Moreover, MiR-92a promotes the proliferation of gastric cancer stem cells [68]. Recent study demonstrates high expression of miR-92a in HCC [69]. MiR-92a partly promotes the migration and invasion of esophageal squamous cell carcinoma cells (ESCC) by inhibiting cadherin 1 (CDH1) [70].

Although a growing number of evidences mention the key role of miR-92a in tumor biology, its role is rarely reported in the development of lung cancer. Moreover, little is known about the relationship between the miR-92a and survival in patients with NSCLC. The results of these show that the mechanism underlying this relationship may be exported in the future. Our lab results showed miR-92a promoted the development of NSCLC via targeting sprouty RTK signaling antagonist 4 (SPRY4, under submitting). If miRNA-based therapeutics indeed become a reality, the miR-17-92 cluster and related miRNAs will undoubtedly be among the first to be targeted. Importantly, miR-17-92 cluster will play an irreplaceable role in lung cancer.

As modulation of miRNAs represents a novel approach for enhancing the therapeutic efficacies of cancer therapy, research efforts have been put forth to identify agents that induce or inhibit the expression of miRNA. The carcinogenic role of miR-17-92 cluster in different tumors has been confirmed [8].

At the first time, overexpression miR-17 promotes the proliferation and metastasis of hepatoma cells [71]. What's more, miR-17 promotes the progression of colorectal cancer via activating the Wnt/β-catenin pathway [72]. At the second time, miR-18a promotes the development of gastric cancer cells via inhibiting p53 and promoting the expression of signal transducer and activator of transcription 3 (STAT3) [73]. At the third time, high expression of miR-19 associates with TNM stage of lung cancer, which boosts to metastasis of lymph node [33, 53]. Besides, miR-19 promotes proliferation of esophageal cancer cells and prevents apoptosis of cancer cells via down-regulating the expression of TNF-α [30]; What's more, miR-20 promotes prostate cancer cells invasion and metastasis by targeting non-receptor tyrosine kinase ABL proto-oncogene 2, non-receptor tyrosine kinase (ABL2) [74]. Last but not least, miR-92, inhibiting PTEN, activating PTEN/PI3K/AKT signaling pathway, promotes invasion and metastasis in rectal cancer cells [75]. In summary, each member of the miR-17-92 cluster has a direct or indirect relationship with cancer, it can promote the occurrence and development of tumors by regulating the expression of genes.

In general, we have found that miR-17-92 cluster, as tumor promoter, has a measurable impact on the development of lung cancer upon most occasions. However, in any particular case, miR-17-92 cluster also can impress the development of lung cancer (Figure 2). Undoubtedly, this discovery opens up a new way for us to study the relationship between miRNA and tumorigenesis, it certainly highlights the import roles in cancer biology and there may be a more complex relationships at the same time. Moreover, it also supports the continued study promotes the further development of cancers in the clinical outcome. Further studies on it may provide new ideas for the study of tumors, find new biomarkers for the clinical treatment of cancers, and provide a better basis for the precise treatment of cancers.

The functions of miR-17-92 cluster in NSCLC 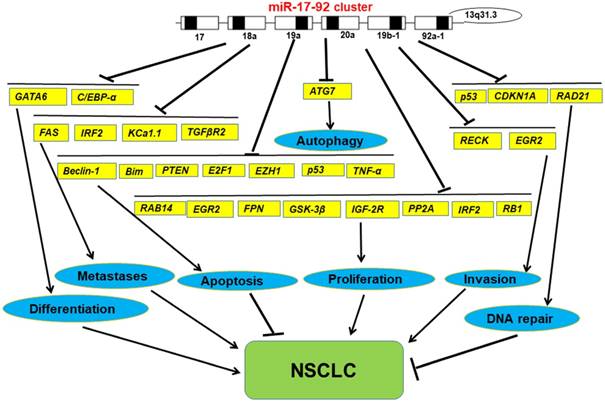 This study was funded by the National Natural Science Foundation (Grant no. 81572122).