Background: Through data mining from the public transcriptome of NPC, cyclin-dependent kinase inhibitor 3 (CDKN3) was identified as a significantly upregulated gene in NPC. CDKN3 functions as a key factor in cell cycle regulation. This study was aimed to investigate the expression of CDKN3 in NPC tissues and its prognostic significance.

Conclusion: High expression of CDKN3 was an independent negative prognostic factor for NPC and was associated with advanced disease status. It might serve as potential therapeutic target and aid in risk stratification for patients with NPC.

Cell proliferation is an essential mechanism for tumor growth. Dysfunction in cell cycle regulators may aid in carcinogenesis and disease progression. To investigate the role of cell cycle regulation in NPC, we analyzed the expression profiles of NPC transcriptome (GSE12452) from publicly available Gene Expression Omnibus (GEO) database with particular emphasis on genes which are related to the regulation of cyclin-dependent protein kinase activity (GO: 0000079) [5-7]. Cyclin-dependent kinase inhibitor 3 (CDKN3) was identified as the significantly upregulated gene that was associated with advanced disease status. CDKN3 encodes a protein belongs to the dual specificity protein phosphatase family. It functions as dephosphorylating CDK2 kinase at Thr160, and thus prevent the activation of CDK2 [8, 9]. As Thr160 phosphorylation is responsible for the CDK2 activation and cell cycle progression, overexpression of CDKN3 suppresses the G1-S phase progression [10]. Overexpression of CDKN3 has been found in numerous human cancer tissues and cancer cell lines, including hepatocellular carcinoma, lung adenocarcinoma, breast cancer, cervical cancer, ovarian cancer, gastric cancer and renal cancer [11-17]. CDKN3 had an oncogenic role in most of them. Interestingly, CDKN3 has been found to act as a tumor suppressor by controlling mitosis through CDK1 (also known as CDC2 in yeast) signaling axis [18]. In glioblastoma cells, CDKN3 could inhibit cell proliferation and migration via phosphatase-dependent inhibition of CDC2. These findings suggested that CDKN3 may have diverse biological function that can act as either an oncogene or tumor suppressor in different types of cancer cells. However, there is little evidence investigating the definite biologic role of CDKN3 in NPC.

The expression of CDKN3 has never been evaluated in a well-defined cohort of NPC patients. In this study, we tried to figure out the role of CDKN3 in NPC, with particular focus on its prognostic significance in NPC patients. The associations between CDKN3 expression and key clinicopathological parameters were also analyzed.

To find genes associated with the carcinogenesis of NPC, we analyzed the transcriptomic dataset deposited in the Gene Expression Omnibus database (GSE12452), consisting of 31 NPC tissues and 10 non-neoplastic nasopharyngeal mucosal epithelial tissues enriched by laser capture microdissection for cells of interest [7]. We used Nexus Expression 3 software (BioDiscovery) to analyze the raw CEL files of the Affymetrix HUMAN Genome U133 Plus 2.0 microarray platform. All probe sets were analyzed without pre-selection or filtering. We performed supervised comparative analysis to find genes that have significantly different expression, particularly focusing on those related to cyclin-dependent protein kinase activity (GO: 0000079). While comparing tumor versus non-tumor tissues or low-staged versus high-staged cases, those with P<0.01 and log2-transformed expression fold change >0.1 were selected for further analysis.

The procurement of formalin-fixed NPC tissue for this study was approved by the Institutional Review Board of Chi Mei Medical Center (IRB10203-001). Between January 1993 and December 2002, 146 NPC patients who received biopsy in Chi Mei Medical Center and with available paraffin-embedded tissue blocks were enrolled in this study. Twenty-two patients who could not fit the selection criteria were excluded, including ten patients diagnosed with systemic disease and another twelve who had not completed a standard course of therapy and/or loss of follow-up. Finally, there were 124 patients enrolled for further analysis. All these patients were free of distant metastasis at initial diagnosis. The histological parameters were reassessed by two pathologists (T.J.C & H.L.H) who were blind to the clinical information. The tumor staging was based on the 7th American Joint of Cancer Committee (AJCC) system [19]. Of these 124 patients, 114 were under regular monitor after radiotherapy until death or their last appointment. The mean follow-up duration is 67.0 months (range, 3-141). All patients received a complete course of radiotherapy with the daily fractionation of 180 cGy to 200 cGy, five fractions weekly, to achieve a total dose of no less than 7,000 cGy. As a rule, those with stage II-IV disease received at least three cycles of cisplatin-based chemotherapy. However, there was one patient with stage II and four with stage IV disease who received radiotherapy alone due to their poor performance status. Seven patients treated in the earlier phase of this cohort didn't have instantaneous image evaluation after therapy to evaluate treatment response. In total, there were 110 patients with complete response and seven with partial response.

Tissue sections of 3-µm thickness were cut from paraffin-embedded blocks, and routinely deparaffinized with xylene, rehydrated with ethanol, and heated by microwave for antigen retrieval in a 10 mM citrate buffer (pH 6) for 7 min. Endogenous peroxidase was quenched by 3% H2O2 treatment. Slides were washed with Tris buffered saline for 15 min and then incubated with a primary polyclonal antibody targeting CDKN3 (Rabbit polyclonal, 1:100; Abcam) for one hour. Primary antibodies were detected by using the EnVision system (DAKO, K5001, Carpinteria, CA). The slides were incubated with the secondary antibody for 30 minutes, developed with 3,3-diaminobenzidine for 5 minutes, and then counterstained with hematoxylin. Two pathologists (T.J.C & H.L.H), blind to the clinical and follow-up information, scored the CDKN3 staining using a multiheaded microscope to reach a consensus on the H-score. The expression of CDKN3 was quantized by using the following equation: H score = ∑Pi (i+1), where i is the intensity (ranging from 0 to 3), and Pi is the percentage of stained tumor cells varying from 0% to 100%. The median of H-score served as a cut-off value to sub-classify all cases into low and high expression of CDKN3.

The statistical significances of differences between CDKN3 expression and various clincopathological parameters were evaluated by Chi-square test. The endpoints for outcome measurement included disease-specific survival (DSS), distant metastasis-free survival (DMeFS), and local recurrence-free survival (LRFS). Above are calculated from the start date of radiotherapy to the date the event developed. These three survival endpoints were calculated by the Kaplan-Meier method and analyzed by the log-rank test. Multivariate analysis was performed by using the Cox proportional hazards model. All tests are two-sided, and P values less than 0.05 were considered statistically significant. Data analysis was performed using SPSS ver. 14 software.

To find genes associated with the carcinogenesis and progression of NPC, we analyzed the publicly available transcriptome (GSE12452) deposited in Gene Expression Omnibus (GEO) database, including 31 NPC cases and 10 normal reference samples. We focused on genes related to cyclin-dependent protein kinase activity and found that CDKN3 showed the greatest log2-transformed expression fold change when comparing tumor versus non-tumor (Log2 ratio=0.7035 and 0.9212; P=0.0008 and <0.0001, respectively) and high-staged (III-IV) versus low-staged (I-II) tumors (Log2 ratio=0.5747 and 0.6007; P=0.0046 and 0.0053, respectively). (Figure 1, Table 1). Thus, CDKN3 was selected for further study and analysis.

Summary of significant differentially expressed genes related to regulation of cyclin-dependent protein kinase activity (GO: 0000079) and associated with tumorigenesis and progression of NPC in the transcriptome of nasopharyngeal carcinoma (GSE12452).

Immunohistochemical study of CDKN3 expression. The protein expression of CDKN3 was not observed in the normal salivary glands (A1) and benign nasopharyngeal mucosa (A2). There were weak and strong cytoplasmic stainings of CDKN3 in representative low-staged (B) and high-staged tumors (C), respectively. 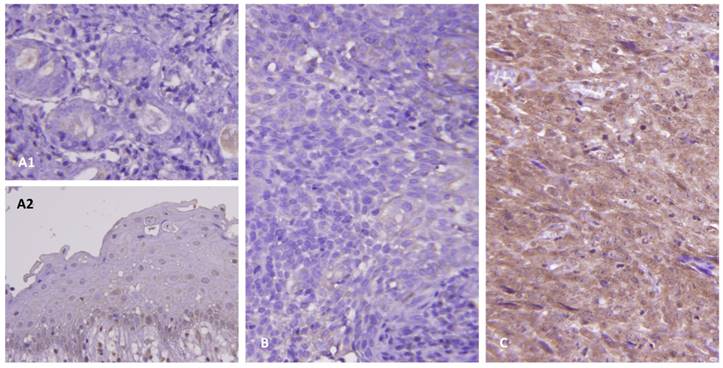 As shown in Table 2, this cohort included 95 males and 29 females with a mean age of 48.6 years (range, 20-83). Clinical stages of the 124 patients were stage I (n=7), II (n = 31), III (n=46), and IV (n=40). Histologic types of these patients were keratinizing (n=5), non-keratinizing, differentiated (n=54) and undifferentiated (n=65). All the tumors mentioned above were positive for EBER except for one keratinizing NPC. In the normal salivary glands (Figure 2A1) and nasopharyngeal mucosa (Figure 2A2), there was no expression of CDKN3. There were variable cytoplasmic stainings in the tumor samples with H-scores ranging from 110 to 380. A representative low-staged NPC showed weak cytoplasmic staining of CDKN3 in tumor cells (Figure 2B). Another one representative high-staged NPC showed strong cytoplasmic staining (Figure 2C).

Moreover, we tried to investigate whether there were correlations between CDKN3 expression and clinicopathological parameters. The result reveals that high expression of CDKN3 was significantly associated with higher primary nodal status (P=0.030) and higher TNM stage (P=0.019) (Table 2).

Associations between CDKN3 expression and other important clinicopathological variables.

CDKN3 overexpression is associated with poor survival in NPC

Survival analysis of NPC patients according to CDKN3 expression by using Kaplan-Meier estimator. The impact of CDKN3 expression on survivals was analyzed by log-rank test. High expression of CDKN3 was significantly associated with worse disease-specific (A), distant metastasis-free (B), and local recurrence-free survival (C).

In regard to the perception of CDKN3 as a tumor suppressor gene in human cancer, some possible assumptions for explaining CDKN3 overexpression in tumors are mutation or alternative splicing leading to aberrant CDKN3 transcripts that encode dominant-negative products of CDKN3. However, CDKN3 mutation or copy number alternation is rare in human cancers and aberrant CDKN3 transcripts occur infrequently and usually at lower levels [13]. These findings cannot explain overexpression of CDKN3 in a wide variety of tumors and question the perception of CDKN3 as a tumor suppressor. CDKN3 has the ability to bind to CDK1 and CDK2 and causes dephosphorylation of the activating residues, leading to suppression of the CDK activities [9, 10]. CDK-driven cell cycle is a major event for proliferation of cancer cells. Though CDKN3 functions as negative regulator of CDK1 and CDK2, we still cannot regard CDKN3 as a tumor suppressor since there are dynamic changes of CDK activities along the cell cycle. The regulation of cell cycle depends not only CDK activation but also CDK deactivation. The final effect of CDKN3 in cell proliferation, either stimulating or suppressing, in different types of cancers cannot be explained by its regulation in CDK alone. In our study, our result supported that CDKN3 has an oncogenic role, rather than acted as a tumor suppressor. More basic researches are needed to clarify the diverse biological function in different kinds of cancer.

In this study, we found that overexpression of CDKN3 was significantly associated with advanced disease status and worse survival, including DSS, DMeFS and LRFS. Our result supported the oncogenic role of CDKN3 in NPC. The molecular mechanism about the diverse functional properties of CDKN3 in different cancer needs to be further studied. In NPC, high expression of CDKN3 is a negative prognostic factor and may serve as a potential therapeutic target.

This study was supported by a grant from the Ministry of Health and Welfare (MOHW103-TD-B-111-05). The authors also thank Biobank and Translational Research Laboratory of Human Cancers at Chi Mei Medical Center for providing the tumor samples and technical supports.

3. Marks JE, Phillips JL, Menck HR. The National Cancer Data Base report on the relationship of race and national origin to the histology of nasopharyngeal carcinoma. Cancer. 1998;83:582-8

10. Poon RY, Hunter T. Dephosphorylation of Cdk2 Thr160 by the cyclin-dependent kinase-interacting phosphatase KAP in the absence of cyclin. Science. 1995;270:90-3