Morphine is the most effective drugs for attenuating various types of severe pain, but morphine abuse carries a high risk of systemic fibrosis. Our previous have indicated that systemic administration of morphine hinders angiogenesis and delays wound healing. Here we have explained the pathological mechanism underlying the effect of morphine on wound healing. To determine how morphine affects wound healing, we first created a wound in mice treated them with a combination of a low doses (5 mg/kg/day) and high doses (20 or 30 mg/kg/day) of morphine. An In vivo study revealed that high-dose morphine-induced abnormal myofibroblasts persist after the end of wound healing because of connexin 43 (Cx43) upregulation. High-dose morphine-induced Cx43 increased the expression levels of focal adhesion molecules, namely fibronectin and alpha-smooth muscle actin (α-SMA) through the activation of transforming growth factor (TGF)-β1 signaling. In addition, we found that Cx43 contributed to TGF-βRII/ Smad2/3 signaling for regulating the differentiation of fibroblasts into myofibroblasts during high-dose morphine exposure. In conclusion, the abnormal regulation of Cx43 by morphine may induce systemic fibrosis because of abnormal myofibroblast function.

Morphine is the most effective drugs for attenuating various types of severe pain. High doses of morphine are commonly used for controlling severe wound pain, such as in burn, cancerous wounds, and large surgical wounds [1]; however, complications and serious side effects of morphine use, including pulmonary fibrosis, lipid fibrosis and hepatic damage, have been reported after long-term morphine use [2, 3]. Although the pathological mechanism of high-dose morphine in inducing fibrosis remains unclear, our previous study suggested that the long-term use of high-dose morphine impaired angiogenesis, increased systemic oxidative stress, and hindered migration of endothelial progenitor cells [4]. Systemic sclerosis (SSc) is a systemic fibrosis disease that is characterized by deficient angiogenesis and increased oxidative stress with inflammatory response [5]. The symptoms of SSc cause systemic vascular resistance because of hypothermia in skin and pulmonary fibrosis [6, 7]. It implicates the high dose morphine facilitates the induction of not only pulmonary or lipid fibrosis but also systemic fibrosis.

SSc-induced fibrosis causes replacement of normal tissue architecture with excessive deposition of extracellular matrix (ECM) in response to inflammation in or damage to the skin [8]. The initial cellular moderators of SSc-induced fibrosis are collagen-producing myofibroblasts, which are activated by paracrine and autocrine signals, in response to fibroblasts injury [9]. Transforming growth factor-β (TGF-β) is the key regulator in SSc malignance. It disrupts the normal balance between matrix metalloproteinases (MMPs) and tissue inhibitors of metalloproteinases. It causes excessive synthesis of ECM and impairs ECM catabolism, thus leading to collagen accumulation and subsequent fibrosis [10]. Several molecules, such as alpha smooth muscle actin (ɑ-SMA) [11], fibronectin [11], S100A4, fibroblast specific protein 1 (FSP 1) [12] and connexins [13], are upregulated in myofibroblasts to regulate the pathological functions; either ɑ-SMA or fibronectin is involved in regulating focal adhesions in myofibroblasts, and both proteins play a crucial role in the development of fibrotic disorders [11]. S100A4 modulates cell shape and motility by interacting with components of the cytoskeleton; it is involved in the interconversions that occur between keratocytes, fibroblasts, and myofibroblasts during wound healing [12]. In addition, connexins, are believed to play a crucial role in governing and development of tissues. Connexin43 (Cx43) is the most widely expressed connexin, it is found in the endothelium and fibroblasts and is implicated in wound healing [14, 15]. Cx43 expression increases on wound closure and Cx43 levels control myofibroblasts differentiation [13]. Knockdown of Cx43 expression has recently been demonstrated to accelerate wound healing by reducing the number of α-SMA-positive myofibroblasts and inducing endothelial proliferation in vivo [16]. Long-term improvement of the rate of wound healing involved a significant reduction in the extent of granulation tissue deposition and subsequent formation of smaller and less distorted scars. Hence, studies have suggested that inhibition of Cx43 is a new therapeutic approach for prevention of fibrous membrane formation [17-20].

Our previous study revealed that morphine enhances accumulation of collagen in incisional wound tissues in a dose-dependent manner. Furthermore, in the study, the expression levels of TGF-β and MMP-2 proteins were significantly enhanced in morphine-treated mice [21]. We hypothesized that high-dose morphine induces systemic fibrosis through activation of the TGF-β signaling pathway. Cx43 causes Smad family signaling to mediate the differentiation of cardiac fibroblasts into myofibroblasts [22]. Thus, high-dose morphine activated Cx43 expression and further regulated α-SMA through the TGF-β signaling pathway, which induces myofibroblast formation. Our study indicated that high-dose morphine induces differentiation of fibroblasts into myofibroblasts through stimulation of α-SMA expression in Cx43-dependent TGF-β/Smad2/3 activation. Because the presence of α-SMA-positive myofibroblasts is a critical factor during wound healing, these findings indicate the role of Cx43 expression in morphine-induced systemic fibrosis.

Mice (C57BL/6J, 8-10 weeks old) were obtained from the Animal Center of the National Cheng Kung University (Tainan, Taiwan). Mice were dorsal shaved and sprayed with 70% ethanol. A full-thickness incisional wound (approximately 2 cm in length) was created by a surgical scissors and crack closure on the dorsum of anesthetized animals. The wound was closed by interrupted suture using a 4º- nylon thread. Mice were randomly assigned to control or morphine-treated group and received normal saline or morphine (5 or 20 mg/kg/d, i.p.) injection for 14 consecutive days, as described in our previous study. All procedures were performed in accordance with the guidelines of the Institutional Animal Care and Use Committee (The National Cheng Kung University College of Medicine, Tainan, Taiwan).

Human normal skin fibroblasts, WS1, were obtained from American Type Culture Collection (ATCC) and cultured in MEM-α with 10% FBS in a humidified 5% CO2 at 37°C.

Total RNA was isolated from WS1 cells with Trizol reagent (Invitrogen, Carlsbad, CA) and reversed transcribed into cDNA using Superscript III reverse transcriptase (Invitrogen, Carlsbad, CA). After reverse transcription, amplification of mRNA was done by PCR SuperMix from Invitrogen with specific primer under the following conditions: 1 cycle of 94 °C for 3 min, 28 cycles composed of 30 sec denaturation at 94 °C, 30 sec primer annealing at 57 °C, 1 min extension at 72 °C, and followed by 72 °C for the final extension for 7 min. PCR products were analyzed on 1.5% (w/v) agarose gel containing ethidium bromide and then visualized under ultraviolet light.

Commercialized custom Stealth™ RNAi for human Cx43 and scrambled negative control siRNA, which does not interfere with any known mRNA, were obtained from Invitrogen (Invitrogen, Carlsbad, CA). WS1 cells were transfected with 25

nM of the siRNAs using Lipofectamine RNAiMAX (Invitrogen, Carlsbad, CA) in accordance with the manufacturer's protocol. Briefly, gene-specific siRNA oligomers were diluted in Opti-MEM I reduced serum medium (Opti-MEM, Invitrogen, Carlsbad, CA) and mixed with transfection reagent. After 20 min incubation at room temperature, the complexes were added to the cells. Transfected cells were incubated at 37 ºC for 48 hours and harvested. Message RNA level was evaluated using RT-PCR.

Statistical comparisons were performed by means of a Student's t-test. The statistical significance was set at P values less than 0.05.

Morphine increased the expressions of Cx43 and focal adhesion markers in vivo. Western blot analysis for expressions of (A) Cx43, and α-SMA obtained from the wound tissue homogenates isolated from the control and morphine-treated (5 and 20 mg/kg/day) mice. Expression levels of Cx43 and α-SMA were quantified as shown in (B) and (C) respectively. (*, p < 0.05) (D) Expression levels of S100A4 and fibronectin were obtained from the control and morphine-treated (30 mg/kg/day) mice. Wound tissues were obtained on day 14 after creation of incisional wound. The expressions of S100A4 and fibronectin were quantified and are shown in (E) and (F), respectively. (**, p < 0.01; ***, p < 0.001) 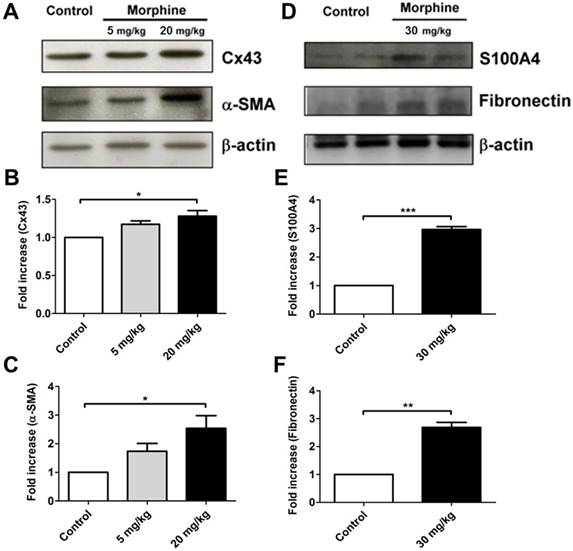 Myofibroblasts persisted after the end of wound healing in high-dose morphine treated mice. Wound tissues were obtained from the control and morphine-treated (30 mg/kg/day) mice on day 14 after creation of incisional wounds. Immunofluorescence staining in the wound tissue of (A) control group and (B) morphine-treated group; Cx43 and S100A4 exhibited conjugated green fluorescence and red fluorescence, respectively, which were co-localized and merged with yellow color in skin tissue after morphine treatment. The boxed region is magnified in the merged region arrows indicate the position of myofibroblasts. 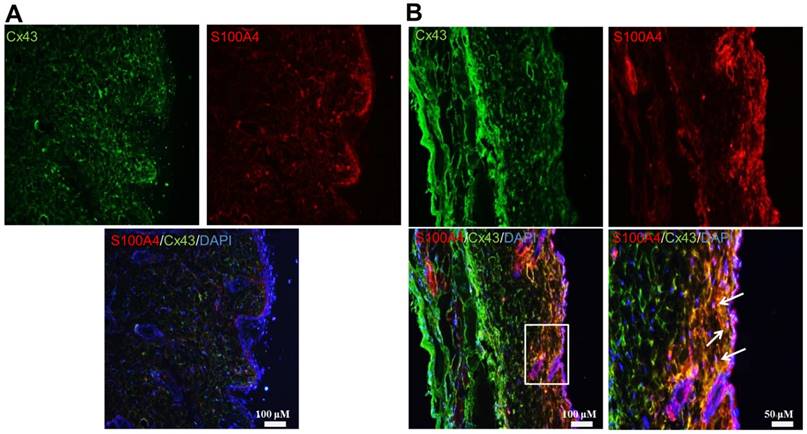 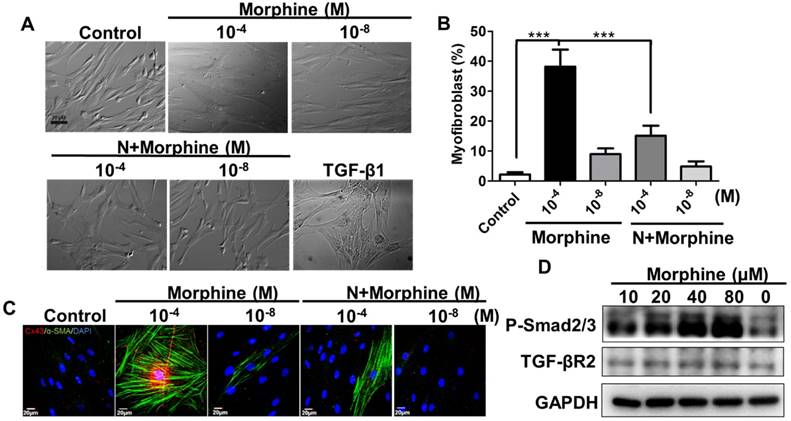 Our previous study demonstrated that systemic administration of high-dose morphine accelerates collagen accumulation in cutaneous tissues, thus increasing the tensile strength of incisional wounds [21]. The present results suggest that the pathological mechanism of the effects of high-dose morphine on incisional wounds involve the presence of myofibroblasts, which are differentiated from fibroblasts through the Cx43 activated TGF-βRII/ Smad2/3 signaling pathway. Cx43 plays a role in regulating wound closure, and controls myofibroblast differentiation; however, upregulation of Cx43 maintains myofibroblast existence after the end of wound healing (Fig. 1). The preservation of myofibroblasts implied that high-dose morphine facilitied induction of systemic fibrosis during wound healing. Furthermore, high dose morphine induced-Cx43 may be involved in the progression of epithelial mesenchymal transition (EMT), which is regulated by the TGF-β signaling pathway [32]. In this study, high-dose morphine upregulated Cx43 expression, thereby contributing to the modulation not only fibroblast differentiation but also endothelial cell function in wound repair. As shown in Fig. 1 and Fig 2, wound tissue analysis revealed that high-dose morphine also promoted Cx43 expression throughout the entirety of the skin. Thus, an increase Cx43 expression may promote EMT through transition of endothelial cells toward mesenchymal phenotypes (smooth muscle-like phenotype). EMT is a crucial contributor to vascular development and remodeling. MMP-2 has been proposed to play a vital role in the EMT process through removal of vascular endotelial-cadherin. Our future work will explain the mechanisms underlying morphine-induced fibrosis and EMT by assessing the tensile strength of wounds in morphine-treated mice to estimate th eextent of morphine-induced fibrosis.

Chronical morphine application can contribute to delayed wound healing [33]. High-dose morphine probably contributes to endothelial cell dysfunction. Gap junctions are crucial for regulating and coordinating vascular function through direct intercellular communication [34]. Overexpression of Cx43 interrupt intercellular communication by increasing the level of focal adhesion molecules, such as α-SMA or fibronectin, following upregulation of the endothelial marker CD31, which interferes with vascular development [35]. Notably, serum levels of soluble CD31in patients with SSc are higher than those of healthy controls [36], thus confirming that deficient angiogenesis is associated with dysfunctional endothelial cells in systemic fibrosis diseases. Furthermore, morphine-induced delay of wound healing may also be associated with endothelial cell growth arrest. TGF-β signaling promotes the differentiation of endothelial cells into smooth muscle-like cells and disrupts the proliferation of endothelial cells. Furthermore, cell-cell contact itself appears to be responsible for restraining endothelial proliferation and thus maintaining a mature endothelial monolayer in a non-proliferative state; however, upregulation of the cell-cell communication, such as Cx43, downregulates endothelial cell proliferation [37], and potentially impairs angiogenesis by dysfunctional endothelia cells.

2. Gottlieb LS, Trey C. The effects of fluorinated anesthetics on the liver and kidneys. Annual review of medicine. 1974;25:411-29

8. Jimenez SA. Role of endothelial to mesenchymal transition in the pathogenesis of the vascular alterations in systemic sclerosis. ISRN rheumatology. 2013;2013:835948

26. Kugler J, Hug P, Doenicke A, Spatz R, Zimmermann W. [The effect of the morphine antagonist naloxone on the effect of fentanyl]. Arzneimittel-Forschung. 1978;28:1532-3