In the head and neck region, autogenous bone grafting and artificial biomaterials are currently being used to treat bone defects due to trauma, tumor, or surgical invasion. However, bone tissue for autogenous bone grafting is limited, and there is a risk of infection or invasion to donor tissue. Thus, in recent years, treatment for bone defects using undifferentiated mesenchymal stem cells existing in vivo has attracted attention. In particular, among mesenchymal stem cells, bone marrow-derived stem cells are thought to be the major source of stem cells and are particularly attractive as donor cells in regenerative medicine because of their pluripotency. In vivo, bone marrow-derived stem cells have been reported to differentiate into various cells such as tracheal epithelium, intestinal mucosal epithelium, brain neurons, and salivary glands in normal tissues1,2. Further, bone marrow-derived cells can be recruited from bone marrow adjacent to wound tissue during the wound healing process3,4. Hence, it has become clear that bone marrow-derived cells are involved in the maintenance and repair of various organs. In vitro, recent studies have shown the existence of stem cells obtained by long-term culture of adherent cells from bone marrow cells5-7, and these cells differentiate into osteoblasts, chondrocytes, and adipocytes8,9. As described above, bone marrow-derived cells are deeply involved in tissue regeneration, and there are many reports of bone tissue regeneration using these cells10,11. However, the dynamics and role of bone marrow cells in vivo have not been fully elucidated.

Embedded tissues were fixed in 4% paraformaldehyde for 12 h and then decalcified in 10% EDTA for 3 weeks. Tissue was embedded in paraffin using routine histological preparation and sectioned to 5-μm thickness. The sections were used for hematoxylin-eosin (HE) staining and IHC.

IHC for GFP was carried out as follows. The sections were deparaffinized in a series of xylene for 15 min and rehydrated in graded ethanol solutions. Endogenous peroxidase activity was blocked by incubating the sections in 0.3% H2O2 in methanol for 30 min. Antigen retrieval was achieved by 0.1% trypsin treatment for 5 min. After incubation with normal serum, the sections were incubated with primary antibodies at 4°C overnight. Tagging of primary antibody was achieved by the subsequent application of anti-rabbit IgG (ABC kit; Vector Laboratories, Inc., Burlingame, CA, USA). Immunoreactivity was visualized using diaminobenzidine (DAB)/H2O2 solution (Histofine DAB substrate; Nichirei, Tokyo, Japan), and slides were counterstained with Mayer's hematoxylin. 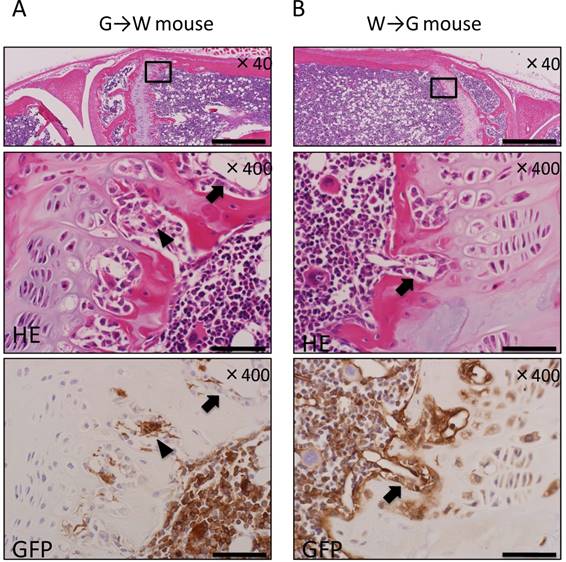 At POD 14, cartilage and bone formation were observed around the femur and muscle areas. In the femur area, cartilage formed at POD 7 was replaced with neonatal bone, and osteoblasts and osteoclast-like cells were present around neonatal bone (Fig. 4A). Further, in the muscle area, granulation tissue formation was observed between muscle fibers, and bone formation surrounded by osteoblasts was observed in contact with existing muscle tissue (Fig. 4B). Immunohistochemically, osteoblasts on neonatal bone as well as osteocytes were GFP-negative, whereas osteoclast-like cells were GFP-positive (Fig. 4A, B). Few round-shaped inflammatory cells, which were GFP-positive, migrated to the center of IBM (data not shown). 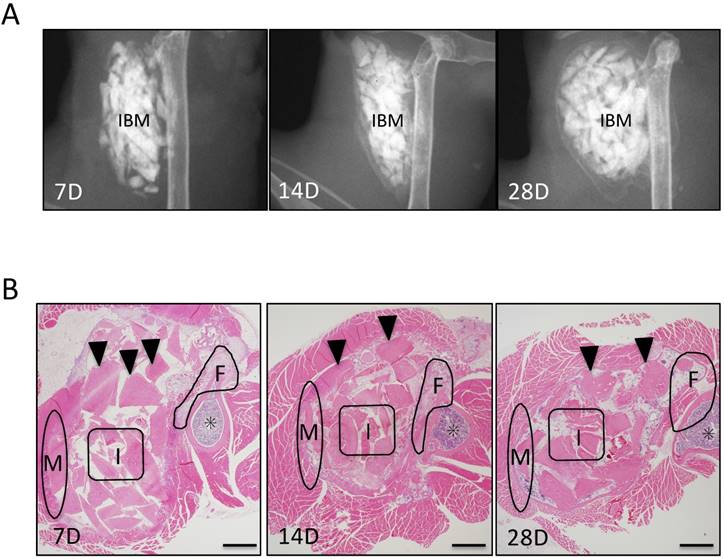 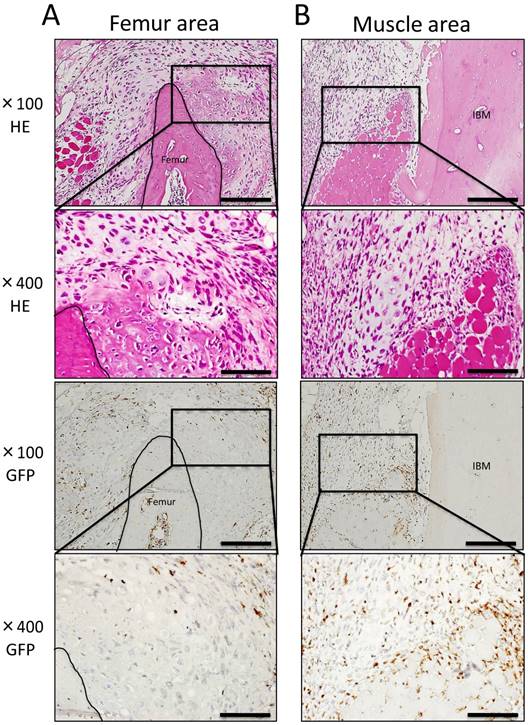 GFP-OC double-fluorescent IHC analysis showed that bone marrow-derived cells were not differentiated into osteoblasts. Therefore, to examine the influence of bone marrow-derived cells on ectopic bone formation, we focused on and analyzed the correlation between the number of GFP-positive cells and the area of formed hard tissue. We counted the number of GFP-positive cells around the existing femur and muscle and in the center of IBM. In addition, the formed hard tissue area including cartilage, bone, and bone marrow-like tissue was measured at the same three IBM sites. 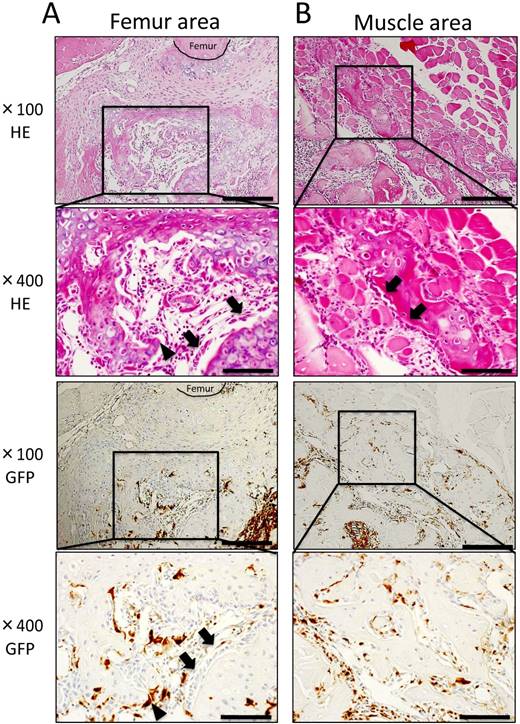 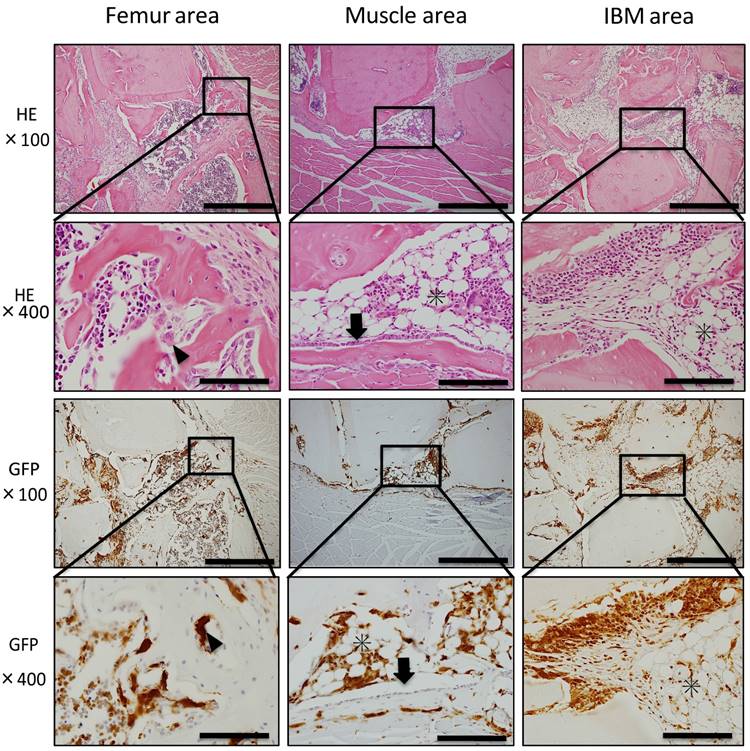 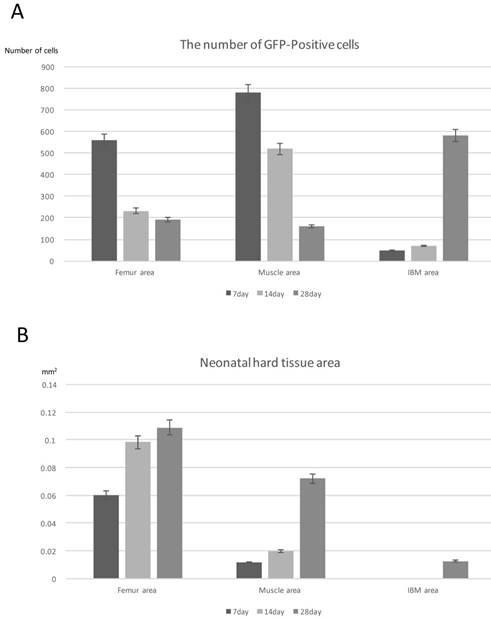