Chemotherapy is one of effective methods for the treatment of tumor. Patients often develop drug resistance after chemotherapic cycles. Salmonella has potential as antitumor agent. Salmonella used in tandem with chemotherapy had additive effects, providing a rationale for using tumor-targeting Salmonella in combination with conventional chemotherapy. To improve the efficacy and safety of Salmonella, a further understanding of Salmonella interactions with the tumor microenvironment is required. The presence of plasma membrane multidrug resistance protein P-glycoprotein (P-gp) is highly relevant for the success of chemotherapy. Following Salmonella infection, dose-dependent downregulation of P-gp expressions were examined. Salmonella significantly decreased the efflux capabilities of P-gp, as based on the influx of Rhodamine 123 assay. In addition, Salmonella significant reduced the protein express the expression levels of phosph-protein kinase B (P-AKT), phosph-mammalian targets of rapamycin (P-mTOR), and phosph-p70 ribosomal s6 kinase (P-p70s6K) in tumor cells. The Salmonella-induced downregulation of P-gp was rescued by transfection of cells with active P-AKT. Our results demonstrate that Salmonella in tumor sites leads to decrease the expression of P-gp and enhances the combination of Salmonella and 5-Fluorouracil therapeutic effects.

The proliferation of drug resistant tumor cells is believed to relapse in most patients after several cycles of chemotherapy. The growing evidences point out that the tumor microenvironment plays an important role in drug resistance [1]. P-glycoprotein 1 (P-gp) is the multidrug resistance protein 1 (MDR1) or ATP-binding cassette, sub-family B member 1 (ABCB1). The P-gp is an important protein of the cell membrane that pumps chemotherapeutic drugs out of cells [2]. Many tumors have higher levels of P-gp that correlates with drug resistance [3].

Salmonella targets to tumor sites and arrests tumor growth [4, 5]. The combination of Salmonella and chemotherapy acted additively to delay tumor growth and prolong the survival time of tumor-bearing mice [5- 7]. Previously, we have shown that Salmonella increases the efficiency of cisplatin via enhancement of gap junction [8]. Meanwhile, Salmonella can target to tumors and modulate numerous signaling pathways of tumor cells [9]. We hypothesize that Salmonella not only enhances drug diffusion via upregulation gap junction, but also decreases drug efflux through downregulation P-gp. This study provides evidence for the mechanism of the regulation of P-gp by Salmonella and validates the incorporation of Salmonella as a novel therapeutic strategy against tumor.

B16F10 or 4T1 cells were plated in 12 well culture plates for 24 h, and treated with various MOI of Salmonella for 4 h. The cells were washed with PBS and added the antibiotic medium. Retention of Rho-123 was measured to evaluate P-gp functional activity in B16F10 and 4T1 cells. Intracellular Rho-123 was determined from the fluorescence (Ex. 530nm Em. 590 nm) by spectrometer (BMG Labtech, Headquarters Germany). The accumulation of Rho-123 in cells was also analyzed using a fluorescence microscope. Cell proliferation was assessed by the colorimetric WST-8 assay (Dojindo Labs, Tokyo, Japan) according to the manufacturer's instructions [16].

Mice were inoculated subcutaneously (s.c.) with 106 B16F10 or 4T1 cells at day 0, and at day 7 nodules developed at all injection sites with approximately tumor volume of 80 mm3. Groups of tumor-bearing mice were injected intraperitoneally (i.p.) with Salmonella 2 ×106 colony-forming units (cfu) at day 7 followed by 5-FU (40 mg/kg) treatment on days 9, 11, and 13, or with either treatment alone. All of the mice were monitored for tumor growth as previously described [8].

The ANOVA was used to determine differences between groups. Any P value less than 0.05 is regarded statistically significant.

Salmonella (S.C.) regulated the expression of P-glycoprotein (P-gp), and AKT/mTOR signaling pathway. The expression of P-gp, AKT, mTOR, p70s6K was measured in B16F10 (A) and 4T1 (B) cells by Western blotting analysis. The β-actin expression served as loading controls for and total protein. Each experiment was repeated three times with similar results. 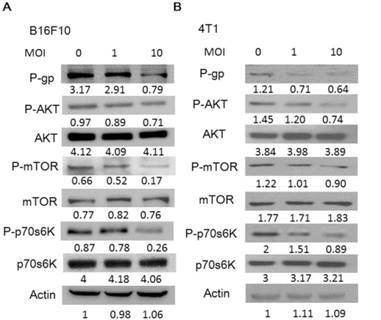 To gain insights into the role of P-gp on Salmonella infection, we used Western blotting analysis to study the correlation between P-gp and Salmonella infection. Fig. 2 shows that the protein levels of P-gp were decreased in Salmonella-treated tumor cells. Furthermore, the AKT /mTOR signaling pathway can promote P-gp protein synthesis through phosphorylation of p70s6K [17, 18]. In dose dependent manner, Salmonella significantly reduced the phosphorylation of AKT, mTOR, and p70s6K in B16F10 and 4T1 cells (Fig. 2). These results suggest that reduction of P-gp expression in tumor cells was associated with inhibition AKT/mTOR/p70s6K signaling pathway during Salmonella infection. 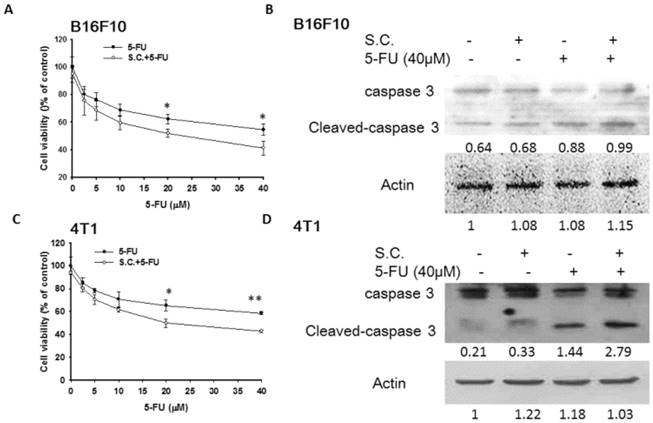 Constitutively active-AKT reduced the effects of Salmonella (S.C.). The B16F10 and 4T1 cells were transfected with constitutively active AKT plasmid (5 μg) for 16 h prior to treatment with Salmonella (MOI = 10) or not for 4 h. The expression of P-glycoprotein (P-gp), AKT, mTOR, p70s6K protein in B16F10 (A) and 4T1 cells (B) was determined. The β-actin expression served as loading controls for and total protein. Each experiment was repeated three times with similar results. 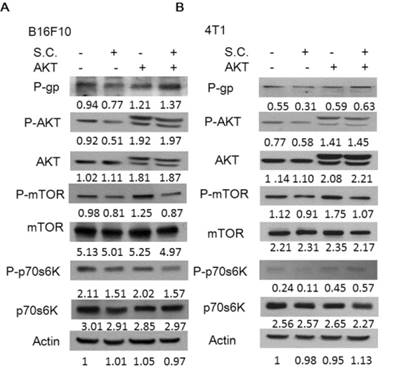 Constitutively active-AKT decreased the effects of Salmonella (S.C.) in combination with 5-FU. The B16F10 and 4T1 cells were transfected with constitutively active AKT plasmid (5 μg) for 16 h prior to treatment with Salmonella (MOI = 10) or not for 4 h. Salmonella-treated (MOI=10), or control cells were exposed to 5-FU (40 μM) for 48 h followed by determination of caspase 3 expression by the Western blot analysis in B16F10 (A) and 4T1 (B) cells. Multiplicity of infection (MOI). 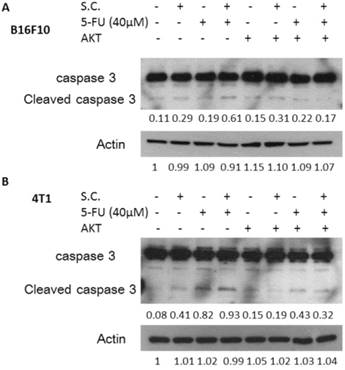 Salmonella in combination with 5-FU enhanced the antitumor activity

The effects of the combinational treatment of 5-FU and Salmonella in vitro and in vivo were determined by using mouse melanoma and breast tumor models. The combination of Salmonella and 5-FU inhibits tumor growth and tumor size compared to 5-FU alone, suggesting that Salmonella can increase the efficacy of 5-FU. However, the detailed mechanism of the combinational therapy remained uncertain. In this study, we used mouse tumor models to determine the mechanisms of Salmonella-induced signaling and the consequences of the combination therapy. Salmonella was demonstrated the ability to decrease the expression of P-gp through posttranscriptionally regulated [19]. Some studies also demonstrated downregulation of p-gp expression via inhibition of AKT/mTOR pathway [17]. There is a growing evidence that an increase in chemotherapy-mediated response to P-gp downregulation [20]. There is extensive literature of tumor-targeting Salmonella increasing the efficacy of chemotherapy [21-24]. Salmonella recruited peripheral immune cells to the tumor by upregulating interferon γ and T cells are also involved in the modulation of Salmonella-induced host immunity [25, 26]. Thus, some studies may suggest that tumor necrosis factor α is response for main cells infiltrating Salmonella-treated tumors [27]. Salmonella has been used as an antitumor agent that specifically proliferates within tumors and inhibits their growth [28]. In addition, Salmonella cannot disperse throughout the tumor and this is the disadvantage for its use as an anticancer agent [28]. Our previous studies suggested that Salmonella disperses within tumors and inhibits tumor growth when combined with chemotherapy [7, 8]. There is a significant increase of apoptosis in 5-FU-treated cell. Cell proliferation analysis and Western blotting assay showed a significant increase in cell death of Salmonella combined with 5-FU treated tumors compared to control. Downregulation of P-gp may allow high intracellular cytotoxic drug concentrations in tumor cells. The P-gp expression in tumor cells may influence the clinical response to chemotherapy. To show the results, Salmonella manipulate P-gp in conjunction with 5-FU treatment may provide new insights for tumor therapy. The 5-FU is one of the most commonly used drugs to treat cancer including breast, colon and some skin cancers. Therefore, the major limiting factor in the use of 5-FU is the side effects in normal tissue including diarrhea, month ulcers, and hair thinning. This would allow the use of lower 5-FU concentration, thus decreasing the side effects. Salmonella provides to accelerate cell death in tumor cells while decreasing P-gp expression. Recent studies revealed that resveratrol decreases in P-gp expression is regulated by AKT/mTOR signaling pathways [29]. Previously, we demonstrated that AKT/mTOR signaling is involved in the cell-defense elimination of Salmonella. The AKT/mTOR signaling pathway negatively regulates some protein syntheses that are critical for tumor cell survival [11, 16]. We determined that the levels of phosphorylated AKT, mTOR, and p70s6K were significantly decreased in Salmonella-treated cancer cells. Herein, we investigated the effect of Salmonella on P-gp expression and function. We found that Salmonella-inhibited activation of AKT/mTOR pathway and are thought to play an important role in the downregulation of P-gp. By using of the cytoxicity effect of 5-FU and the pleiotropic activities of Salmonella, we suggest that Salmonella combining with 5-FU appears to aim at reversing cancer drug resistance.