Methods: We completed retrospective obstetric record reviews on 3172 pregnant Japanese females (parity = 0, n = 1047; parity = 1, n = 1083; parity ≥ 2, n = 1042), aged 20 to 39 years old at delivery, with pregravid body mass indices of less than 30. All patients underwent spontaneous deliveries with term, singleton, cephalic and live newborns of appropriate-for-gestational age birthweight, without adverse neonatal outcomes. We characterized labor progression patterns by examining the relationship between elapsed times from the full dilatation and cervical dilatation stages, and labor durations by examining the distribution of time intervals from one cervical dilatation stage, to the next, and ultimately to the full dilatation.

Conclusions: Active labor may not start until 5 cm of dilatation. At the beginning of the active phase, cervical dilatation was slower than previously described. These results may reduce opportunities for obstetric interventions during labor progression.

Cervical dilatation curves serve as clinical reference for appropriate management of labor progression. Inaccurate diagnosis of protracted or arrested labor may lead to inappropriate obstetric interventions including cesarean section (CS) deliveries. Considering risks associated with primary CS and adverse CS-related implications for subsequent pregnancies, primary CS should be avoided if possible [1]. Friedman was the first to depict the preliminary labor curve [2], and two landmark labor curves of primiparas and multiparas which showed definite criteria for labor progression and duration [3, 4]. However, abnormal labor progression and obstetric interventions were included in these previous, widely-used cervical dilatation curves.

Past theories on labor progression and duration may no longer be applicable to those in current obstetric practice [5]. Friedman established mean labor curves that considered various exogenous, and endogenous, maternal and fetal factors. Besides changes in maternal and fetal characteristics, obstetric interventions and statistical procedures have improved [3, 4]. Recent labor curves by Zhang et al. and Suzuki et al. markedly differ from Friedman's labor curves, featuring slower cervical dilatation in the acceleration phase and lack of the deceleration phase [6, 7]. Their study designs also included variations in maternal and fetal backgrounds, and included abnormal labor progression and obstetric interventions.

Clinical definitions were as follows: Gestational age was determined from the first day of the patient's last menstrual period, and reconfirmed with fetal crown-rump length, measured by transvaginal ultrasound in the first trimester. Fetal presentation was assessed before and at admission by transabdominal ultrasound. Onset of labor was defined as onset of labor pains, which continued to delivery, with ≤ 10 minutes interval between contractions, or ≥ 6 times the number of contractions per hour. Midwives and obstetricians performed cervical dilatation measurements in centimeters, commonly at onset of labor pain, not during intervals between labor pains, as directed by institution care standards or guided by obstetric events such as admission, rupture of the membranes, intensive constructions, fetal heart rate pattern changes, breathing changes, or spontaneous pushing. However, we could not completely clarify whether all pelvic examinations were taken at onset of labor pain. Non-pharmacological approaches (e.g., nipple stimulation, castor oil and herbs) were not conducted. Episiotomy required maternal or fetal indications. There was no major difference in the management of labor among the study centers and during the study period.

We analyzed the normality of continuous variables using the Shapiro-Wilk W-test. Medians and 95% confidence intervals were calculated for non-normally distributed continuous variables. Statistical differences in maternal characteristics and perinatal outcomes between primiparas and multiparas (parity = 1 and ≥ 2) were analyzed using the Mann-Whitney U-test or Kruskal-Wallis test for non-normally distributed continuous variables and the χ2 test for categorical variables. Differences of P < 0.05 were considered significant. We used the JMP® 12.0 software (SAS Institute Japan Co., Ltd, Tokyo, Japan) for statistical analyses.

Table 1 and Table 2 show maternal characteristics and perinatal outcomes of the primiparas and multiparas. Maternal age at delivery and body mass increased with increasing parity. Premature rupture of the membranes was associated with primiparas. Labor durations decreased with increasing parity [median (95%tile) 7.75 (18.71) vs. 4.07 (10.07) vs. 3.75 (9.91) hours at the first stage and 0.72 (2.34) vs. 0.20 (0.75) vs. 0.15 (0.55) hours at the second stage for parity = 0, 1 and ≥ 2]. Median cervical dilatations at admission were 4 cm (primiparas) and 5 cm (multiparas). Neonatal body size increased with increasing parity. Although several newborns showed low umbilical artery pH and low Apgar scores at 1-minute, no newborns were admitted to NICU and no adverse neonatal outcomes were observed. 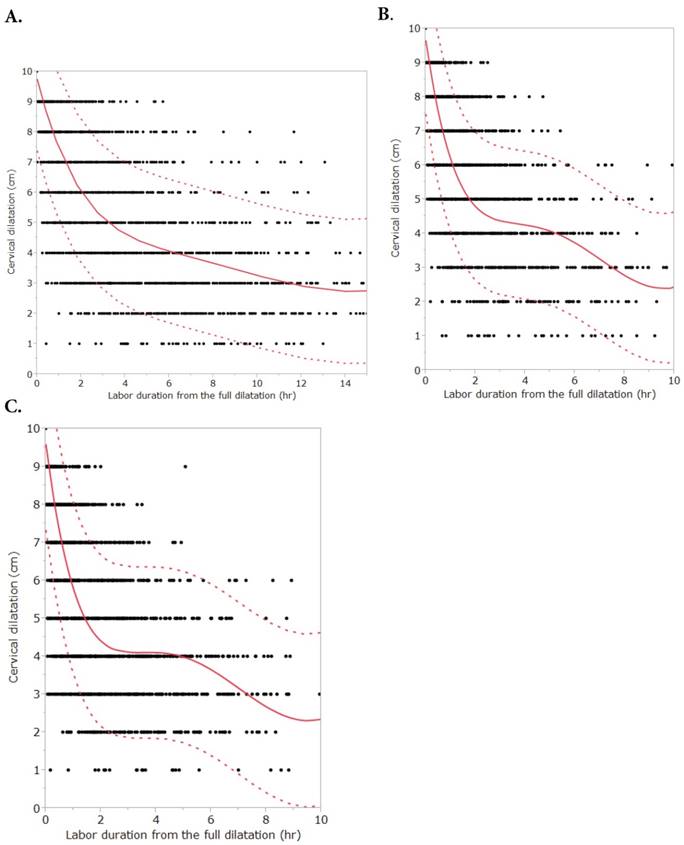 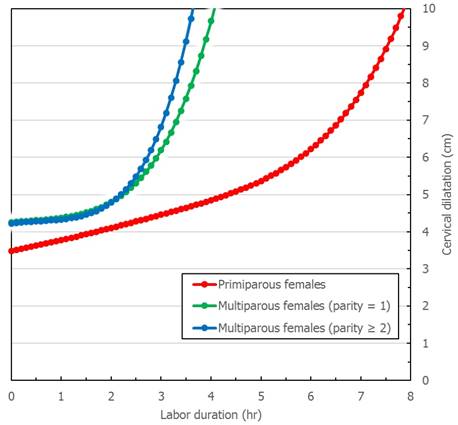 Expected time intervals, from one cervical dilatation stage to the next, for primiparous and multiparous females.

Time to the full dilatation, by cervical dilatation stages, for primiparous and multiparous females.

We examined pregnant Japanese females without abnormal labor progression and obstetric interventions to describe cervical dilatation curves that characterized normal labor progression. Our results demonstrated that labor progression was faster with increasing parity and the active phase of labor may not start until 5 cm of dilatation. The results also suggested that at the beginning of the active phase, cervical dilatation was slower than previously described, and at the end of the active phase, no deceleration phase was observed. These findings may provide useful information for obstetric management, potentially reducing the need for medical intervenetions during labor.

Fastest cervical changes occurred at 6 cm (primiparas) and 5 cm (multiparas) of dilatation. These results were different from Friedman's curves with definite inflection points around 4 cm [2-4]. Friedman's study included many abnormal labor progression and obstetric interventions; e.g., in the primiparas, 20.8% exhibited malrotation and 51.2% required vacuum extraction delivery [3]. Furthermore, labor curve synthesis methods were not clearly described [2-4]. Peisner and Rosen analyzed 1060 primiparas and 639 multiparas and reported that non-complicated patients with 5 cm of dilatation should be in the active phase [14]. This finding agrees with our data. Patients enter the active phase at different stages, and with different rates. Due to interpersonal variation, the average labor curve tends to appear flattened [6]. Consistent labor progression patterns in the active phase were not observed, particularly among the primiparas, and our labor progression was slower than those reported by Friedman [3, 4]. Zhang et al. analyzed 62415 deliveries, from 2002 to 2008, and reported that primiparas and multiparas seemed to progress at a similar pace, before 6 cm, and cervical dilatation rate accelerated after 6 cm [5]. Another study of 26838 deliveries, from 1959 to 1966, revealed that multiparas consistently seemed to progress at a faster pace than primiparas [15]. Demographic transition might affect labor progression and duration [3, 4, 8-13]. Epidural analgesia and weak pains during oxytocin use may lengthen the active phase [2-4, 12]. Because Zhang's study included a substantial number of participants with oxytocin use and epidural analgesia [5], their labor progression developed more gradually than our labor progression.

The 95%tile of labor progression took over 3 hours to progress from 6 cm to 7 cm (primiparas), and over 2 hours to progress from 5 cm to 6 cm of dilatation (multiparas). Considering labor augmentation in the active phase, cervical dilatation of ≤ 1.2 cm/hr and ≤ 1.5 cm/hr for primiparas and multiparas were defined as protracted disorders of labor [3, 4]. Previously in Japan, 2-hour and 1-hour thresholds were usually used for diagnosing arrested disorders of labor, for primiparas and multiparas, after 4 cm, which was considered as “in the active phase” in Friedman's curves [3, 4]. These criteria may be too short before 6 cm [15], considered as “in the latent phase” in present curves [6, 7]. Our participants achieved spontaneous deliveries even if their labor durations exceeded the 95%tile of expected time intervals, which exceeded those thresholds. Diagnosis of protracted or arrested labor should be based, not only on research definitions, but also on maternal and fetal conditions [5]. Offering reassurance of maternal and fetal statuses, within a normal labor duration range, may allow patients to continue spontaneous labor progression. To optimize the opportunities for appropriate management of labor and improve perinatal prognoses, prospective studies are needed to establish clinical thresholds for diagnosing protracted or arrested labor. The upper limit of the normal range, i.e., the 95%tiles of expected durations, may be the useful reference for these types of prospective studies.

The 5%tile of traverse times to the full dilatation, during the active phase, was less than 1 hour (primiparas) and 0.5 hours (multiparas). Natural history of the normal active phase, during the first stage of labor, predicted labor progression. Recent reports of labor curve creation [6, 7] included inclusion criteria of cervical dilatation < 7 cm at admission and labor duration, from admission to delivery, of > 3 hours. Based on these criteria, most precipitate labors could be excluded. Sheiner et al. observed no significant differences in perinatal complications, but higher rates of maternal complications, associated with precipitate labor [16]. During precipitate labor progression, newborns may fall onto hard surfaces, or suffer unexpected injuries without the benefit of delivery assistance. Intense contractions may cause other perinatal complications. In our study, the prevalence of precipitate labor was 21.3% (4.4% vs. 29.6% for parity = 0 and ≥ 1), which was higher than 14.3% (6.9% vs. 21.5% for parity = 0 and ≥ 1) reported from a prior Japanese study [17]. These prevalence rates were markedly higher than 2.1%, reported in a study out of the United States [18]. As mentioned above, in Japan, onset of labor is defined as the presence of regular contractions separated by ≤ 10 minutes, as reported by the patient. Suzuki noted that the high incidence of precipitate labor may result from differing definitions, or from diagnosis of regular contractions by clinical monitoring devices, and not the patient's declaration [17].

This study had a number of limitations. First, we did not determine the reliability of intrapersonal and interpersonal cervical dilatation measurement, and prospective, hourly vaginal examinations were not performed, as described by Friedman [2-4]. Second, because constructions were assessed by the attending obstetricians and midwives, the reliability of intrapersonal and interpersonal labor diagnosis was not assessed. Third, we acknowledge that selection bias, related to the exclusion criteria, might underestimate the normal ranges, i.e., the 5%tile and 95%tile of various measurements. Finally, the current database likely reflects a comparatively urban Japanese population. However, we believe that our results accurately depict the cervical dilatation curves, of spontaneous deliveries in pregnant Japanese females. These curves provide useful information for obstetric management and may reduce the need for obstetric interventions during labor progression.