Objective: To classify the infants into 9 blocks based on the deviation of both placental weight (PW) and fetal/placental weight ratio (F/P) Z score and compared the incident rate of perinatal death in each of the small for date (SFD) vs. appropriate for date (AFD) vs. heavy for date (HFD) groups.

Methods: The study population consisted of 93,034 placentas/infants from women who vaginally delivered a singleton infant. They were classified into 3 groups according to infants' weight: SFD (n=3,379), AFD (n=81,143) and HFD (n=8,512). The population was classified into 9 blocks according to the combination of i) low vs. middle vs. high placental weight (PW: a sex-, parity- and gestational-age-specific placental weight) and ii) low vs. middle vs. high F/P. In both i) and ii), ± 1.28 standard deviations in the in the Z scores was used for classifying low vs. middle vs. high, with 3x3 making 9 blocks. We then determined whether or not the perinatal death in each block differed among the three groups (SFD vs. AFD vs. HFD).

Placental weight (PW), which is closely related to fetal growth, has been reported to change according to various pregnancy-related conditions. Reports have shown that a lower PW is associated with chronic hypertension/preeclampsia, whereas a higher PW is associated with maternal anemia, gestational diabetes, and fetal growth restriction [1-3]. PW may reflect the maternal and fetal environment, and, therefore may be employable to detect it. The fetal/placental weight ratio (F/P) has attracted obstetricians' attention, as it may indicate certain underlying conditions associated with some placental disorders, especially in relation to growth-restricted fetuses. This parameter has therefore been discussed in relation to adverse perinatal outcomes, such as perinatal death, non-reassuring fetal status and low Apgar scores [2, 3].

In addition, a Norwegian birth cohort study found that infants with a decreased F/P at birth were more likely to develop certain cardiovascular events in adulthood; therefore, PW and F/P may be important not only in evaluating individual patients but also from the perspective of the developmental origins of health and disease (DOHaD) [6]. Endemic nomograms of PW and F/P have been established for some ethnic groups and used in birth-cohort analyses [7, 8]. The lack of data on PW and F/P in Asian populations prompted us to create nomograms for PW and F/P in the Japanese population and Z scores for PW and F/P [9].

An unduly heavy placenta [10], i.e., heavier than expected from the infant's weight [11], has been reported to be associated with adverse pregnancy outcomes. In complicated pregnancies associated with a low birth weight, the placenta was relatively heavy compared with the birth weight [12]. Such an unduly heavy placenta is here referred to as 'inappropriately heavy placenta'. Similarly, an unduly light placenta is referred to as 'inappropriately light placenta”. Both have not yet been fully characterized by simple assessment by F/P.

Some reports have indicated the potential limitation of simple F/P assessment because normal F/P 'ratio' might be reflected from the results of both normal, both low, or both high of BW and PW [5] [10]. Hutcheon et, al. demonstrated that placental weight is the independent predictor for the neonatal and infantile morbidity as well as mortality [5]. Therefore, we focused on the possibility that the simultaneous assessment of F/P and PW might be useful as well as reliable for assessing pathophysiology for adverse outcomes in comparison with the simple assessment by F/P.

The study protocol was reviewed and approved by the Ethics Committee of International University of Health and Welfare. (Date of approval: 2015/02/14, reference number: 13-B-99) Individual data were collected from the Japan Perinatal Registry Network database 2013, which is managed by the Japan Society of Obstetrics and Gynecology. The characteristics of this database were previously reported [4, 13, 14]. The exclusion criteria included the following: gestational week at delivery over 42 weeks, multiple pregnancy, fetal hydrops, congenital fetal/neonatal anomaly, and cases with unknown or missing data for parity, gestational age at delivery, birth weight (BW), PW, or the infant's gender.

As described previously [4], after manually removing blood clots, the untrimmed placenta together with the membranes and umbilical cord was weighed by the midwife. In more detail, the placenta was weighed without drainage within 2 h after delivery using standardized scales of medical devise grade. In case of a fragmented placenta, all fragments were collected and weighed. The F/P was calculated by dividing the BW by the PW in grams, and was rounded off to three decimal places [9].

The neonatal growth chart (New Japanese neonatal anthropometric chart) in general use in Japan, published by Itabashi et al. in 2010 [15], was generated based on data from vaginal deliveries, as the BW of infants from cesarean deliveries was significantly lighter during the preterm period. Thus, in this study, the PW and F/P were analyzed only in placentas/infants delivered vaginally. The study population consisted of 93,034 placentas/infants from women who vaginally delivered a singleton infant between 22 and 41 weeks of gestation. Four sets of groups were constructed according to the infants' gender and the mothers' parity (nulliparous or multiparous): Group A: male, nulliparous (n=25,261), Group B: male, multiparous (n=22,562), Group C: female, nulliparous (n=24,273), and Group D: female, multiparous (n=20,938). (Figure 1)

The standard curves of the PW and F/P were constructed by the LMS method (described later) according to fetal gender (male or female) and maternal parity (nulliparous or multiparous), and were represented as the 10th, 50th, and 90th percentiles for every gestational week and day. The LMS method was used to calculate three sets of values for each gestational day: skewness (L), median (M), and coefficient of variation (S), using Box-Cox transformation [16]. Each Z score of the PW and F/P was then calculated by the formula; Z = [(sample data/M) L -1]/ (L x S). 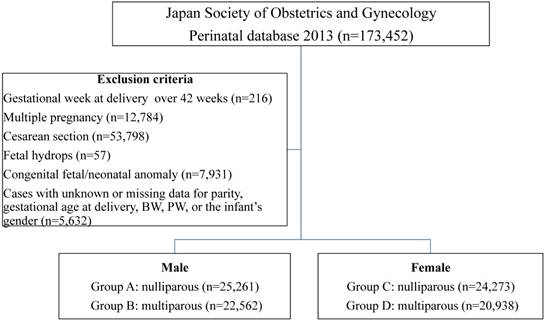 Poor perinatal outcomes (cases) were defined as perinatal death consisting of intrauterine fetal death (IUFD) and neonatal death. We determined whether the characteristics, including perinatal death and gestational weeks at delivery, of each block differed among the SFD vs. AFD vs. LFD groups.

The results were expressed as the means ± SD or median (range). The statistical analyses were performed using the SAS 9.1 software program (SAS Institute, Cary, NC, USA). An analysis of variance for continuous variables, confirmed by Dunnet's method, and the chi-square test for categorical variables, confirmed by Dunnet's method, were used for the statistical analyses. A p-value <0.05 was considered significant. 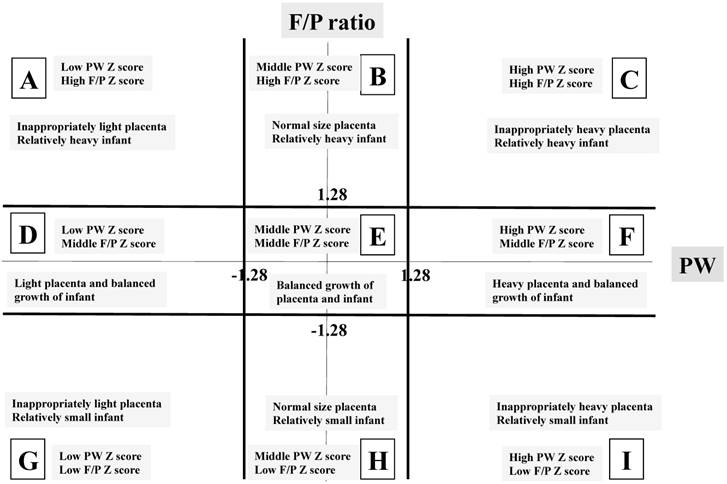 Clinical background in the present study

Summary of the statistical differences: Comparisons of gestational age at delivery and birth weight in each block with 'block E' within the corresponding groups

Distribution of SFD infants (n=3,379) The percentage of each block is shown. 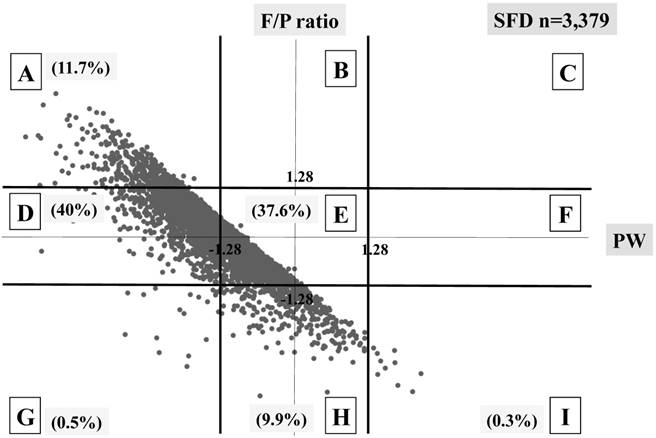 Distribution of AFD infants (n=81,143) The percentage of each block is shown. 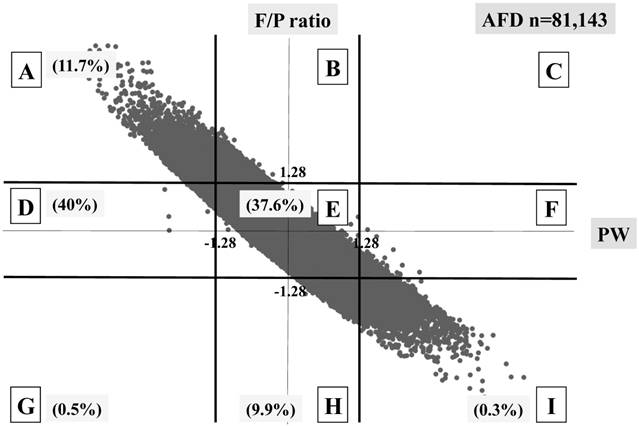 Distribution of HFD infants (n=8,512) The percentage of each block is shown. 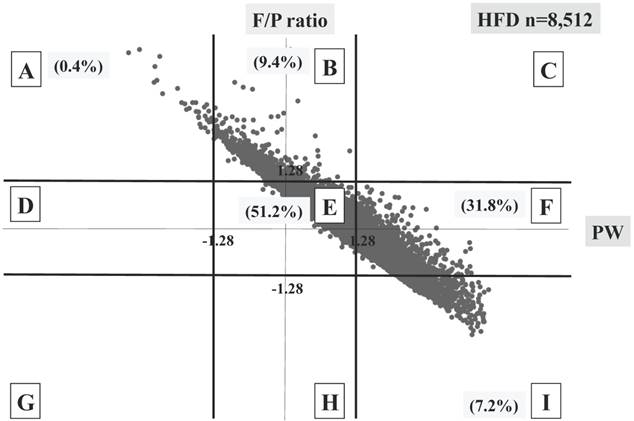 Contrary to the significant higher incidences of perinatal deaths in the blocks A, D, G, and H compared to block E in the SFD group, significant differences were observed between blocks A and E and between blocks I and E in the AFD group. These tendencies were almost the same in the cases of IUFD.

Using a sex-, parity- and gestational-age-specific PW and F/P Z scores in Japanese vaginally-delivered singleton population, we made the following findings for the first time: (1) the distribution of 9 blocks, based on PW and F/P Z scores (3 x 3 = 9 blocks), differed among the SFD, AFD, and HFD group. (2) An 'inappropriately heavy placenta' in the SFD group and 'inappropriately light placenta' in the HFD were very rare. (3) Each block was related to perinatal death.

p value of perinatal, intrauterine fetal, and neonatal deaths to block E in each block in the three groups

REF: reference for other blocks

We believe that the F/P should be established in an individual population and updated. The secular trends in neonatal anthropometric measurements at birth are associated with changes not only in antenatal management and maternal age and size but also in socioeconomic or environmental conditions. Neonatal growth charts should therefore be updated to reflect these changes [17]. This may also hold true for the F/P. The major previous reports on F/P were from 1970's [18], 1980's [10] or 1990's [19, 20]. In addition, these reports have issues with ethnicities (multiracialities), and, thus, studies on the F/P in single ethnicity populations are needed. Fortunately, more than 95% of the present study population consisted of single ethnicity (Japanese), so these present data overcame the issue of heterogeneous ethnicities in previous studies. While other reports have described the F/P of Japanese population, these values were derived from a small sample size (n=3,434) at a single institute [21]. We believe that the present data, at least in part, provided fundamental data of F/P of a single ethnicity based on a large sample size.

McNamara et al. [3] analyzed the Z score in complicated pregnancy and showed that the Z score was able to predict maternal complications, such as chronic hypertension or preexisting diabetes. In the present study, the block-classifications based on both the PW and F/P Z scores were well correlated with fetal/neonatal death.

This study has some limitations. First, the study population was limited to vaginally delivered placentas/infants, excluding those abdominally delivered; despite the latter being more frequently associated with adverse perinatal outcomes, we did not provide data on this clinically significant fraction. Second, the present data were mainly obtained from secondary and tertiary obstetric institutes and may therefore not represent the entire Japanese population.

It would be further interesting study to investigate the relationship between each block (group) and maternal risk factors such as smoking habit, diabetes or hypertension in pregnancy and, to apply the 9-block categorization to retrospective reanalysis of the ongoing birth cohort in search of predictive factors of long-term developmental prognosis of the offspring.

We thank Mr. Norio Sugimoto for his statistical help. This work was supported in part by Grants-in-Aid for Scientific Research from the Ministry of Education, Science, Culture and Sports of Japan (Nos. 15H04882 and 16K15703).

12. Eskild A, Romundstad PR, Vatten LJ. Placental weight and birthweight: does the association differ between pregnancies with and without preeclampsia?. American journal of obstetrics and gynecology. 2009;201:595.e1-5

14. Hayashi M, Nakai A, Satoh S, Matsuda Y. Adverse obstetric and perinatal outcomes of singleton pregnancies may be related to maternal factors associated with infertility rather than the type of assisted reproductive technology procedure used. Fertility and sterility. 2012;98:922-8