Background: The study examined the difference in the expression of the receptor for activated C kinase 1 (RACK1) between anaesthesia with propofol and isoflurane in rats with myocardial ischemia-reperfusion injury (IRI).

Methods: Male Sprague-Dawley rats were studied. Anaesthesia was induced with xylazine 20 µg/g by intraperitoneal injection and maintained with propofol or isoflurane. Myocardial IRI was induced by ligating the left anterior descending artery for 1 hour. Reactive oxygen species (ROS), cardiomyocyte apoptosis, the expression of RACK1 and toll-like receptor 4 (TLR4), and the heart injury score were compared between the two groups.

Conclusion: There were significant differences in inflammation and apoptosis, including the expression of RACK1 and TLR4, after myocardial IRI between the propofol and isoflurane groups. However, both groups had similar heart injury scores.

Ischemia-reperfusion injury (IRI) is defined as the tissue damage caused when the blood supply returns to a tissue after ischemia [1, 2]. The restoration of circulation after the absence of oxygen and nutrients from blood during the ischemic period paradoxically induces pathophysiological processes that include the accumulation of reactive oxygen species (ROS) and release of inflammatory cytokines, resulting in cell apoptosis [3-6]. Consequently, myocardial IRI produces cardiac injury, cardiac contractile dysfunction, and increased myocardial infarct size.

Recently, the receptor for activated C kinase 1 (RACK1) was reported to perform an anti-apoptosis role in cardiomyocytes after myocardial IRI [7-9]. It mediates protein kinase C (PKC) signal transduction in cardiomyocytes and its over-expression results in the suppression of apoptosis [10, 11].

The study was approved by the Konkuk University Institutional Animal Care and Use Committee (KU16071-1). Male Sprague-Dawley (SD) rats 6-8 weeks in age and weighing ~200 g were purchased from Orient Bio (Seongnam, Korea). The animal experiments followed the National Institutes of Health guidelines for care, and all animals were handled for 7 days before starting the experiments. Anaesthesia was induced by intraperitoneal injection of xylazine 20 µg/g (Rompun®, Bayer Korea, Korea). Anaesthesia was assessed by pinching the hind foot. Tracheal intubation was performed at surgery. A heating pad was placed on the surgery platform to maintain the rat body temperature during surgery. With the rat in a supine position, it was fastened to the platform with tape, and its tongue was pulled out with forceps. Intubation was performed using a 1.77-inch-long 16 gauge catheter (BD, USA) inserted through the larynx to the bronchus. The correct position of the intubation catheter was confirmed by checking for symmetric chest expansion. A ventilator (Harvard Apparatus, Holliston, MA, USA) was connected to the intubation catheter and set to 1) a fraction of inspired oxygen (FiO2) of 0.5, 2) an inspiratory flow rate of 170 mL/minute, 3) a tidal volume of 6 mL/kg, and 4) a respiratory rate of 80 breaths/minute [15]. The rats were randomly divided into propofol and isoflurane groups, in which anaesthesia was maintained with propofol or isoflurane, respectively. For propofol (Dongkook Pharmaceutical, Korea), a 10 mg/mL solution in a 50 ml syringe was continuously administered using an infusion pump (Masterflex L/S peristaltic pump with Masterflex L/S easy load pump head and L/S tubing, Cole-Parmer Instrument, Vernon Hills, IL, USA) at 5 µL/g/ hour (50 µg/g/ hour) via a tail vein. The isoflurane (JW Pharmaceutical, Korea) was administered using a vaporiser at 3% volume via the intubation catheter.

One hour after inducing anaesthesia, the rat was carefully turned so that it was lying on its right side and facing its left side. The chest was shaved and alcohol and povidone (Firson, Korea) were applied to prevent contamination of the surgical field. A left thoracotomy was performed between the 3rd and 4th ribs, and the skin and muscle were dissected carefully. A chest retractor was placed in the incision and the pericardium was picked up gently with forceps. The left anterior descending artery (LAD) was identified between the pulmonary artery and left auricle and ligated with 4-0 silk (Covidien, Dublin, Ireland). The cardiac ischemia was evaluated as successful when the colour of the territory of the LAD changed to light red after ligation. The retractor was removed and the surgical field was covered with wet gauze for 1 hour. Then, the ligature around the LAD was released to allow reperfusion. Reperfusion was confirmed when the colour in the territory of the LAD changed to dark red. The surgical field was covered with wet gauze for 4 hours under anaesthesia and the rats were sacrificed. After laparotomy, a 3 mL blood sample in an ethylenediaminetetraacetic acid (EDTA) tube was obtained from the hepatic vein to measure the ROS level. The heart was extracted to obtain cardiomyocytes and for histology and immunohistochemistry.

The blood in the EDTA tube was transferred to a conical tube and diluted to 10 mL with phosphate-buffered saline (PBS; Gibco, USA). Peripheral blood mononuclear cells (PBMCs) were isolated from the blood using density-gradient centrifugation over a Biocoll gradient solution (Biochrom, German). The PBMCs were washed with fluorescence activated cell sorter (FACS) buffer [1% bovine serum albumin (BSA) and 0.01% NaN3 in PBS]. After washing the PBMCs, they were stained with 2',7'-dichlorofluorescein diacetate (H2DCFDA, Life Technologies, USA), changing from non-fluorescent into fluorescent on oxidation, to detect intracellular ROS. The staining was performed for 30 minutes in the dark at room temperature and the sample was analysed on a flow cytometer. The data were analysed using FlowJo software (Tree Star, USA).

To confirm apoptosis and the expression of RACK1, cardiomyocytes were cultured. Heart tissue was digested with Hanks balanced salt solution (HBSS; Gibco, USA) and incubated in a conical tube with an enzyme solution in a 37°C water bath for 30 minutes. The enzyme solution consisted of 0.1% collagenase type 2 (Sigma-Aldrich, USA) and 0.5% trypsin (Gibco, USA) in HBSS. After incubation, the supernatant was collected. The cells from the supernatant were harvested using a centrifuge at 700 g for 10 minutes and suspended in Dulbecco's modified Eagle's medium F-12-1 (DMEM F-12-1, Gibco, USA) containing 5% foetal bovine serum (FBS; Thermo Fisher Scientific, USA), heat-inactivated horse serum (HS; Vector, USA), and 1% penicillin-streptomycin (Gibco, USA). After centrifugation, the pellet was plated on a 100 mm dish and incubated for 1 hour at 37°C in a carbon dioxide incubator. After incubation, the supernatant in the dish was harvested and seeded on another dish with DMEM F-12-1. After cardiomyocytes were obtained via cell culture, as described above, cardiomyocyte apoptosis was evaluated using flow cytometry. The cultured cardiomyocytes were stained with tetramethylrhodamine, methyl ester, perchlorate (TMRM; Thermo Fisher scientific, USA), and annexin-V (BioLegend, USA). The staining was performed for 30 minutes in the dark at room temperature and the sample was analysed using flow cytometry. The data were analysed with FlowJo software.

To confirm the expression of RACK1, immunohistochemistry and Western blotting were performed.

Immunohistochemical staining for RACK1 (Abcam, USA) and toll-like receptor 4 (TLR4, Abcam, USA) was performed using 4-μm tissue slices, which were deparaffinised and prepared for epitope retrieval using citrate buffer at pH 6. The slices were incubated in blocking solution for 1 hour. After incubation, they were reacted with primary antibody against mouse-RACK1 (Abcam, USA) overnight at 4°C. Then, they were incubated for 1 hour with diluted biotinylated secondary antibody. After reacting with the secondary antibody, avidin-biotin complex reagent (Vector, USA) was applied for 1 hour at room temperature and followed by 3,30-diaminobenzidine reagent (Vector, USA). The slices were stained with haematoxylin as a counter stain, rehydrated, and cover-slipped using mounting medium (Vector, USA).

Heart tissue was fixed overnight at room temperature in 4% paraformaldehyde solution (PFA; BIOSESANG, Korea). After washing the heart tissue, it was embedded in paraffin blocks. The tissues were cut in 4 μm slices using a microtome and stained with haematoxylin (Vector Laboratories, USA) and eosin (Sigma-Aldrich, USA). The sliced tissues were examined by light microscopy. The heart injury score was determined in sections containing the right and left ventricles using a semi-quantitative scale from 0 to 4, as follows: 0 = no injury, 1 = isolated myocyte injury, 2 = one focal area of injury, 3 = two or more areas of injury, and 4 = diffuse areas of damage compromising more than 50% of the myocardium.

The differences between groups were analysed using an unpaired t-test using GraphPad Prism 5.01 (GraphPad Software, USA). Statistical significance was set to less than 0.05. The sample size was calculated with the “resource equation method”. A sample size of 10 animals per group was calculated, as needed, to show a significant difference. The data are presented as the means ± SD. 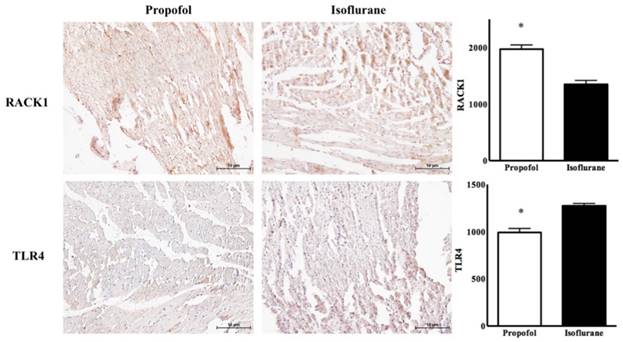 The massive burst of ROS released during myocardial IRI results in cardiac injury and contractile dysfunction with increased infarct size [16, 17]. By contrast, the small releases of ROS before an ischemic event may have a beneficial effect on the heart at myocardial IRI [18]. In terms of ROS, propofol protects the heart against myocardial IRI via its ROS scavenging activity. It enhances the endogenous cardiac anti-oxidant capacity and ultimately attenuates IRI [19]. In comparison, inhalation anaesthetic agents provide protection against myocardial IRI by stimulating the release of small amounts of ROS, which triggers and enhances the production of endogenous anti-oxidant enzymes and activates mitochondrial KATP channels, limiting myocardial infarction [20]. The significant lower expression of ROS in the propofol group in our study was reasonable.

Nevertheless, our result for isoflurane should be considered. First, the cardioprotective effect of isoflurane on myocardial IRI is initiated by the small amount of ROS released, not resulting in injury. Therefore, cardiomyocyte apoptosis would differ significantly between the two groups. Second, we could not assess the cardioprotective effect of isoflurane in myocardial IRI without a control group. Our results were a simple comparison between two groups. If rats without any anaesthetic agent were included, the results would be more concrete. However, ethical principles have to be considered. Third, the superiority of the cardioprotective effects of propofol and isoflurane could differ with the concentrations of anaesthetic agents, duration of the ischemic event, and other factors [33, 34].

Interestingly, the similar histological findings in the heart were remarkable. This meant that the significant differences in inflammation and apoptosis between the two groups were not sufficient to have a different effect on the injury. It also means that the myocardial function would be similar after myocardial IRI, although it was not evaluated in this study.

In conclusion, there were significant differences in inflammation and apoptosis, including the expression of RACK1 and TLR4, after myocardial IRI between the propofol and isoflurane groups. However, both groups had similar heart injury scores. These findings indicate that propofol and isoflurane have similar effects on myocardial IRI, despite the different mechanisms involved.

This research was supported by Basic Science Research Program through the National Research Foundation of Korea (NRF) funded by the Ministry of Science, ICT and future Planning (Grant number: 2015R1A2A2A01006779, 2015).

This study was supported by the National Research Foundation of Korea (NRF) grant funded by the Korea government (NRF-2016R1A5A2012284).

This paper was written as part of Konkuk University's research support program for its faculty on sabbatical leave in 2017.