Metastasis is one of the hallmarks of cancer cells and involves a series of complex processes of cancer cells. These processes include the acquisition of motility, local invasion and entrance into the systemic blood circulation, survival in circulation, and subsequent extravasation and growth at distant organs [1]. Additionally, extracellular protease secretion and degradation of the extracellular matrix (ECM) play an important role in cancer invasion. Among these proteases, matrix metalloproteinase (MMP)-2, MMP-9, and urokinase-type plasminogen activator (u-PA) play the most important roles in tumor cell invasion and metastasis.

Chemoprevention is the single or combined use of natural or synthetic agents to prevent, delay, reverse, or reduce the tumorigenic process. This therapy is a promising area of current cancer research. C. cassia is a common food spice and presents medicinal properties, such as antiviral [2], antioxidant [3], and anti-tumorigenic [4] activities. Earlier reports have indicated that C. cassia primarily contains vital oils and other derivatives, such as cinnamaldehyde, cinnamic acid, cinnamyl alcohol, cinnamate and coumarin [5-7]. C. cassia essential oil could inhibit cell proliferation and induce apoptosis in human oral cancer HSC-3 cells [4]. However, the effect of C. cassia on the metastasis and invasion of lung cancer cells and the underlying mechanisms of such effect remain unclear. In this study, we proposed that C. cassia may affect lung adenocarcinoma cells to exert anti-cancer effects. Metastasis is caused by numerous factors. Thus, additional experiments were designed to clarify the detailed mechanism of C. cassia in inhibiting the invasion and migration of lung cancer cells.

We determined whether CCE could alter the migration of A549 and H1299 cells. We plated 1.0×104 A549 or H1299 cells in six-well plates for 24 h. The cells were wounded by scratching with a pipette tip, then incubated with DMEM containing 0.5% FBS, and treated with different concentrations of CCE for 0, 24, and 48 h. Cells were photographed using a phase-contrast microscope (×100) as described elsewhere [9, 10].

Cells were seeded onto 24-well plates at a density of 3×104 cells/well and treated with CCE at a concentration of 0-60 μg/mL at 37℃ for 24 and 48 h. After the exposure period, media were removed and cells were washed with phosphate-buffered saline followed by incubation with 0.5 mg/mL MTT in culture medium for an additional 4 h. The blue formazan crystals of viable cells were dissolved and measured spectrophotometrically at 570 nm [11].

After pre-treatment with CCE for 24 h, the cells were harvested and seeded to the Boyden chamber (Neuro Probe, Cabin John, MD) at 1.5×104 cells/well in serum-free medium and then incubated for another 24 h at 37 °C. For the invasion assay, 10 µL of Matrigel (0.5 mg/mL) was applied to polycarbonate membrane filters (8 µm pore size), with the bottom chamber of the apparatus containing standard medium (10% FBS DMEM medium). The invaded cells were fixed with methanol and stained with Giemsa. Cell numbers were counted using a light microscope, whereas motility assay was performed as described for the invasion assay, without Matrigel coating [12].

After treatment with CCE for 24 h, the cells were placed on 24-well dishes coated with collagen type I or gelatin (10 μL/mL). The cells were washed by phosphate-buffered saline to remove nonadherent cells. After staining with 0.1% crystal violet, fixed cells were lysed in 0.2% Triton X-100, and the absorbance was measured at 550 nm [12].

Determination of MMPs and u-PA by zymography

Cells were treated with CCE (0, 20, 40, and 60 μg/mL) for 24 and 48 h. After indicated treatments, the conditioned media were collected, centrifuged to remove any cellular contaminants and stored at -80℃ until use. Collected media were prepared with sodium dodecyl sulphate (SDS) sample buffer without boiling or reduction and subjected to gelatin zymography and casein zymography analysis to determine the MMPs and u-PA, respectively. For gelatin zymography, collected media were subjected to 0.1% gelatin-8% SDS polyacrylamide gel electrophoresis to determine the MMPs. The gels were washed with 2.5% Triton X-100 after electrophoresis and then incubated in the reaction buffer. The gel was then stained with Coomassie brilliant blue R-250, and u-PA activity was visualized by casein zymography [9, 10, 13]. 2% w/v casein and 20 μg/mL plasminogen were added to 8% SDS-PAGE gels. u-PA activity of cells treated or untreated with CCE was measured as described in the gelatin zymography.

After treatment with different concentrations of CCE for 24 h, the total cell lysates were prepared as described elsewhere [11]. The total cell lysates were incubated with the p-FAK, total-FAK, p-ERK1/2, total-ERK1/2, PI3K and RhoA primary antibodies (Cell Singling Technology, Inc., Danvers, MA, USA), washed, and monitored by immunoblot assays using specific secondary antibodies. The relative photographic densities were quantified by scanning the photographic negatives using a gel documentation and analysis system (Alpha-Imager 2000, Alpha Innotech Corporation, San Leandro, CA, USA). After measuring the intensity of each band by densitometry, relative intensities were calculated by normalizing to GAPDH from the corresponding sample.

CCE (up to 60 μg/mL) significantly attenuated cell migration dose-dependently in A549 (Figure 1E) and H1299 (Figure 1F) cells in the wound healing assay.

CCE inhibits A549 and H1299 cells invasiveness and motility

CCE decreases FAK and ERK1/2 phosphorylation of A549 cells

Western blot analysis was performed to investigate the molecular mechanisms. Compared with the control group, CCE significantly reduced p-FAK Tyr397 and p-FAK Tyr925 expression, but had no effect on t-FAK expression (Figure 4E). These results indicated that p-FAK and p-ERK1/2 could mediate the anti-metastasis mechanism of CCE in A549 cells. The signaling transduction proteins ERK1/2 were investigated to confirm whether the expression of FAK downstream was altered. Consequently, expression of phosphorylated ERK1/2 were markedly reduced by CCE in A549 cells, while total protein expression of ERK1/2 was unchanged (Figure 5A). These results suggested the involvement of FAK and ERK1/2 signaling pathways in the role of CCE on A549 cells. 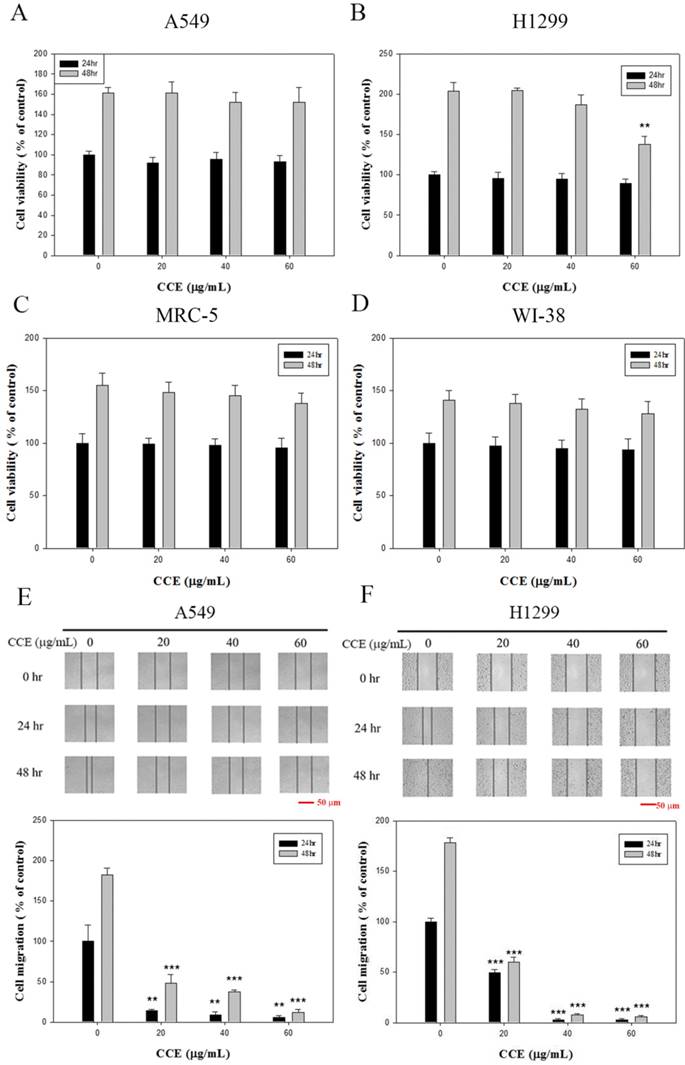 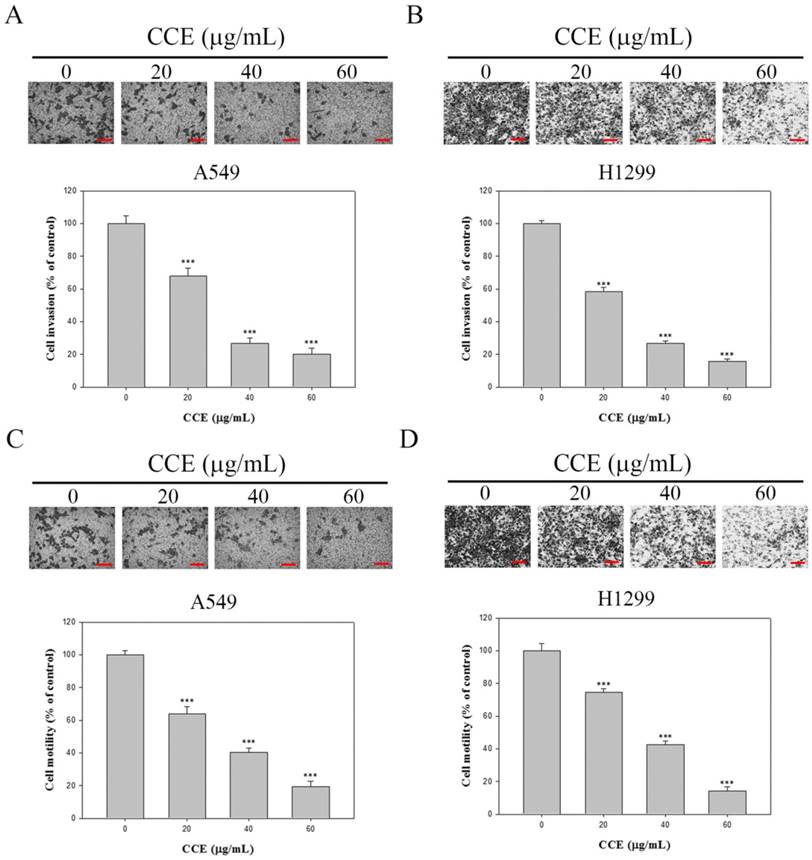 In-depth investigation of the molecular mechanisms revealed that CCE reduced the expression of RhoA but had no obvious influence on the expression of PI3K in A549 cells (Figure 5B). These results suggest that RhoA may have crucial roles in CCE inhibition of A549 cells motility, migration, and invasion.

In summary, these findings suggested that CCE could inhibit the invasion and migration via downregulation of the phosphorylation of ERK1/2 and FAK and activities of MMP-2 and u-PA in human lung A549 and H1299 cells (Figure 6).

Metastasis of lung cancer is the most important cause of patient death, and various treatments have targeted the prevention of metastasis. This study investigated the anti-cancer effects of CCE on lung cancer. We provided clear evidence that CCE, at concentrations without cytotoxicity (up to 60 μg/mL for 24 h), suppressed tumor cell migratory, motility, and invasiveness potential in A549 and H1299 cells. Tumor cell invasion requires cell invasion and digestion of the basement membrane and the extracellular matrix by MMPs and u-PA [14-16]. Thus, we hypothesized that CCE could affect one of these mechanisms in lung adenocarcinoma cells. CCE suppressed the u-PA and MMP-2 activities in both cell lines. 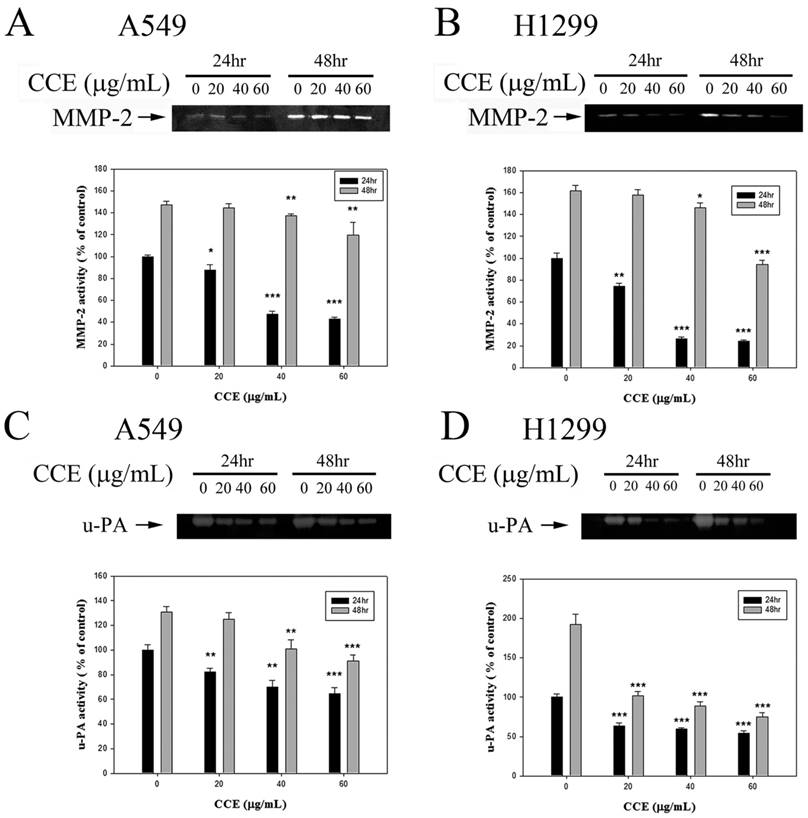 Effects of CCE on cell-matrix adhesion in the human lung cancer cells. The adhesion on (A and B) gelatin and (C and D) collagen type 1 of A549 and H1299 cells was assayed after the cells were treated with different concentration (0, 20, 40, and 60 μg/mL) of CCE for 24 h. Similar results were obtained from three repeated and independent experiments using one-way ANOVA with post hoc Dunnett's test (*, P<0.05; **, P<0.01). 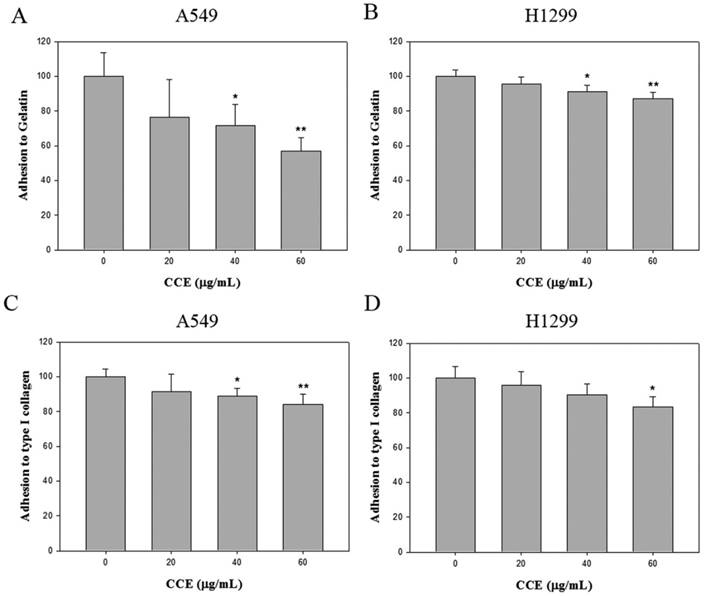 Effects of CCE on the expression of FAK and ERK1/2 in the human lung cancer cells. Expression levels of (A) FAK, ERK, (B) PI3K, and RhoA and their phosphorylation after CCE treatments of A549 cells were measured by Western blot analysis, with GAPDH as the internal control. Similar results were obtained from three repeated and independent experiments using one-way ANOVA with post hoc Dunnett's test (*, P<0.05; **, P<0.01). 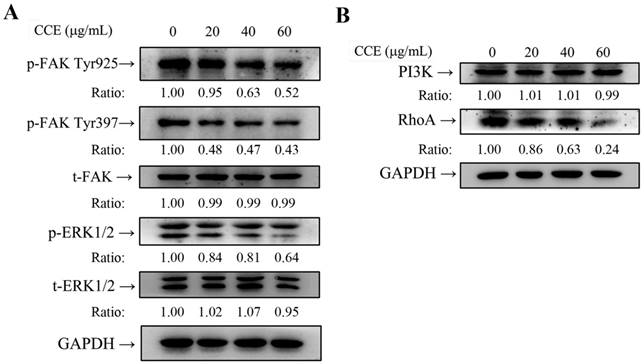 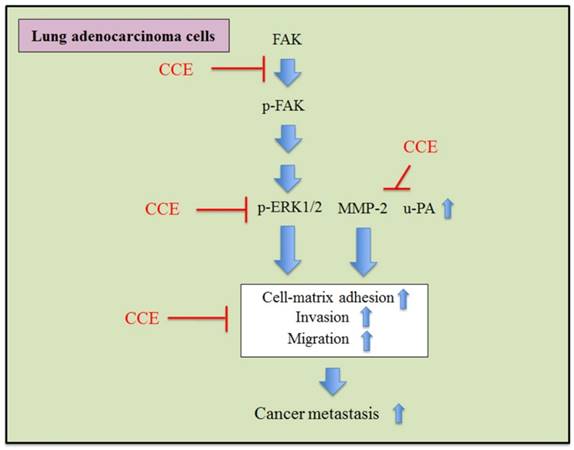 FAK is a focal adhesion-associated protein tyrosine kinase, and the activated p-FAK stimulates the signaling transduction pathway and modulates cancer cell proliferation, survival, motility, adhesion, migration, and invasion [17, 18]. In the present study, we demonstrated that CCE downregulated phosphorylation of FAK and ERK1/2 in A549 cells, which are essential molecules in MMP production to regulate the degradation of ECM and enhance cell invasion [19, 20]. These results indicated that p-FAK could mediate the anti-metastasis mechanism of CCE via the ERK1/2 and FAK pathways in A549 cells. RhoA can promote cell proliferation, invasion, and metastasis in some tumors [21]. Interestingly, we observed the downregulation of the RhoA protein expression by CCE in A549 cells, targeting the actin cytoskeleton to further exert anti-metastatic properties.

Chemotherapy has benefits, but the systemic toxicity and side-effects can be traumatic to patient. Thus, the reduction in anticancer drugs-caused systemic toxicity has been a major challenge in maximizing the beneficial outcome of this therapy for cancer. Phytotherapeutic agents with high anti-tumor effect and less toxicity to normal tissues have been suggested as possible candidates for their capability to improve the efficacy of chemotherapeutic agents [22]. In this study, CCE has anti-invasion and anti-migration effects of highly metastatic human lung carcinoma cells, while CCE exerts no cytotoxicity of normal human lung cell lines as a combination medication with adjuvant chemotherapy on human lung cancer patients.

In conclusion, CCE inhibited the phosphorylation of ERK1/2 and FAK and also downregulated MMP-2 and u-PA to inhibit the metastasis of human lung A549 and H1299 cells. The results confirm the hypothesis that CCE possesses anti-cancer properties on lung adenocarcinoma cells, elucidating the mechanism responsible for these effects. This study may also facilitate the identification of a novel therapeutic agent for human lung adenocarcinoma.

16. Voulgari A, Pintzas A. Epithelial-mesenchymal transition in cancer metastasis: mechanisms, markers and strategies to overcome drug resistance in the clinic. Biochim Biophys Acta. 2009;1796:75-90