Aims: Mechanical dyssynchrony has been reported in heart failure with preserved ejection fraction (HFpEF), with a majority of patients having a narrow QRS complex; however, whether any benefit is observed with restoration of dyssynchrony remains unclear. We sought to assess left ventricular (LV) dyssynchrony and function in HFpEF and elucidate the underlying mechanisms that may account for HFpEF.

Heart failure with preserved ejection fraction (HFpEF) now accounts for approximately half of chronic heart failure (HF) patients and carries a dismal prognosis [1]. Multiple complex pathophysiological mechanisms have been described and, clinically, many patients will present with a narrow QRS complex [2]. Left ventricular diastolic dysfunction (LVDD) has long been considered as the main cause of HFpEF, however, large previous clinical trials failed to improve the prognosis of HFpEF by restoring LV diastolic function[3,4,5]. Therefore, new pathophysiologic paradigms with the goal of developing novel therapeutic regimens in HFpEF arose.

Speckle tracking echocardiography (STE) is a robust assessment tool of mechanical dyssynchrony derived from the regional timing of contraction and relaxation of the myocardium [1, 12]. In the present study, we hypothesized that LV systolic dyssynchrony accounted for the underlying mechanisms of HFpEF, which may provide further insight into the understanding of this complex disorder and spearhead the exploration of more patient-specific therapeutic strategies. For this, we comprehensively assessed the mechanical dyssynchrony and function in HFpEF with a narrow QRS by STE and compared these to patients with HFrEF with a narrow QRS, asymptomatic LVDD patients, and normal healthy subjects with the aim of validating the hypothesis.

A total of 107 patients including 29 asymptomatic patients (14 males and 15 females), 47 patients with HFpEF (20 males and 27 females) and 31 patients with HFrEF (17 males and 14 females) were included for this study conducted in the First Hospital of China Medical University (Shenyang, Liaoning Province, China). HF was diagnosed according to the current recommendations [13], and LVDD was distinguished according to the latest American Society of Echocardiography (ASE) criteria [14]. The HFpEF group had a LVEF >50% while the HFrEF group had a LVEF <50% [14]. Patients with rhythms other than sinus and those with a QRS duration of >130 ms, in addition to those with valvular heart disease, cardiomyopathy, severe pulmonary disease, constrictive pericarditis, LV systolic dysfunction, other associated systemic diseases, and poor echocardiographic views were excluded from this study.

Forty-five healthy volunteers (22 males and 23 females) comprising of medical students and members of the local community with no history of cardiovascular or systemic diseases, abnormal echocardiographic findings, or HF symptoms were enrolled as normal controls (control group). The study protocol was approved by the ethics committee of China Medical University and written informed consent was obtained from all participants.

Standard echocardiography with Doppler studies was performed using a Vivid 7 Dimension ultrasound system (GE Healthcare, Waukesha, WI, USA) equipped with a 2-4 MHz phased array probe. All images and measurements were acquired from standard views, and digitally stored for offline analysis. LV diameters, volumes, mass of hypertrophic LV, LVEF, LA volume, and LV diastolic function were measured in accordance with the ASE guidelines[15] The left atrial diameter (LAD), LV end-diastolic and systolic dimension (LVEDD and LVESD), interventricular septal and posterior wall thicknesses (IVSD and PWD), and LV mass index (LVMI) were measured and calculated. The LVEF was measured using the biplane modified Simpson's method. Peak early (E) and late (A) diastolic velocities across the mitral valve were measured, and the E/A ratio were calculated. The peak early diastolic mitral annular velocity (e') was measured at the levels of the mitral septal annulus (e'sep) and lateral annulus (e'lat) with an apical four-chamber view, and the E/e' ratio was calculated. The LV end-diastolic pressure (LVEDP echo) was estimated at 11.96 + 0.596 * E/e' [16].

For LV strain and strain rate analysis, dynamic two-dimensional ultrasound images of three cardiac cycles from long-axis, apical four-chamber, and two-chamber views were acquired at a frame rate of 57-72 frames per second. The images were analyzed using customized software with the EchoPAC work station (GE Healthcare). The endocardial LV boundary was delineated manually and then the software automatically drew the epicardial boundary. The widths of the regions of interest were manually adjusted to match the actual endocardial and epicardial boundaries. An automatically generated region of interest was divided into six segments. The LV peak longitudinal systolic strain (LS), LV peak LS rate (LSrS), early diastolic strain rate (LSrE), and late diastolic strain rate (LSrA) were calculated. The final strain parameters were the averages of the values obtained from the three apical views. The times to LS (Ts) and LSre (Te) of every segment were measured with reference to the QRS complex. LV systolic and diastolic dyssynchrony were calculated as the standard deviations of the Td (Te-SD) and Ts (Ts-SD) values of all LV segments [17, 18].

Statistical analysis was performed using SPSS version 17.0 software (SPSS Inc., Chicago, IL, USA). Descriptive data are summarized as the percentage frequency for categorical variables and the mean±standard deviation (SD) for continuous variables. Continuous variables between two groups were analyzed using the unpaired Student's t-test or Mann-Whitney U-test, and categorical data were analyzed using the Fisher exact test or chi-squared test, as appropriate. Differences between multiple groups were compared using one-way analysis of variance with LSD correction for the least significant difference. The Pearson coefficient was used for correlation analysis. Receiver-operating characteristic (ROC) curve analysis was employed to identify parameters that were best associated with HF symptoms. Optimal cut-off values were selected at the highest sum of sensitivity and specificity. A two-tailed probability (p) value < 0.05 was considered statistically significant. intra- and inter- observer variability was determined by calculating the coefficients of variation, which were calculated as the standard deviations of differences between repeated measurements divided by the average value of those measurements and expressed as percentages.

Comparison of clinic characteristics of HF patients with study controls

The LV function and dyssynchrony values are summarized in Table 3. The LV global LS, LSrS, and LSrE values were significantly decreased in patients with HFpEF than in normal controls and asymptomatic LVDD patients, which were even more decreased in HFrEF patients (p<0.05). However, there was no difference in global LS and LSrS values in asymptomatic LVDD patients compared to normal controls. Although Te-SD and Ts-SD were significantly more prolonged in the HFpEF and the HFrEF groups than in the control group (p<0.05), however, Ts-SD was shorter in the HFpEF group than the HFrEF group (Figure 1).

Comparison of conventional echocardiography of HF patients versus study controls

Comparison of left ventricular function and dyssynchrony between groups 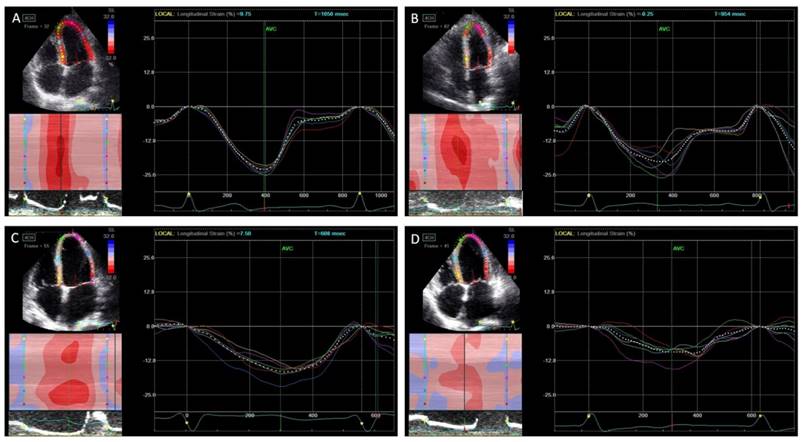 HFpEF accounts for approximately 50% of all HF patients, which is characterized by the presence of LVDD evident from slow LV relaxation and increased LV stiffness [19]. However, restoring LV diastolic function failed to improve the prognosis of HFpEF as previously mentioned [3, 4, 5]. Moreover, LVDD is not unique to patients with HFpEF; previous studies reported that LVDD also occurred in HFrEF, and correlated well with symptoms than LVEF [20, 21]. Therefore, the underlying pathophysiology of HFpEF is still debated despite diverse mechanisms including pulmonary hypertension, reduced peripheral oxygen utilization, and increased arterial stiffness [1]. Additionally, there is no evidence-based management for improving mortality in HFpEF patients.

The majority of HFpEF patients have a narrow QRS, although diastolic and systolic dyssynchronies are very common [2]. In the present study, we found the diastolic and systolic dyssynchronies in the HFpEF and the HFrEF groups were significantly increased compared to normal subjects despite the narrow QRS complex, however, we didn't find any correlation between the width of QRS and dyssynchrony, indicating that electromechanical coupling delay is not a major factor for the observed LV dyssynchrony. The underlying causes of HFpEF, including hypertension, type 2 diabetes mellitus, and coronary artery disease, which first damage the most susceptible subendocardial myocardial fibers [23], may account for the increased mechanical dyssynchrony in HFpEF patients as we demonstrated in this study. 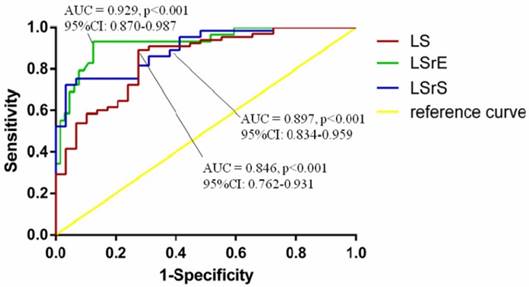 Diastolic dysfunction has long been considered as a key pathophysiologic mediator of HFpEF; the characteristics of concomitant systolic dysfunction has not been well defined, although longitudinal dysfunction resulting from comorbidities such as diabetes, coronary artery disease and hypertension have been shown to play an important role in patients with HFpEF [27]. Physiological studies also suggested that mechanical dyssynchrony impairs LV ejection efficiency [10, 28]. In the present study, apart from the prolonged diastolic and systolic dyssynchrony in HFpEF and HFrEF, a decreased LV longitudinal diastolic and systolic dysfunction was observed in those groups, and LV dyssynchronies correlated well with LV dysfunction. Therefore, LV dyssynchronies may be partly responsible for the LV dysfunction. Moreover, global LS, LSrS, and LSrE could efficiently differentiate HF symptoms from asymptomatic LVDD patients, indicating the LV dysfunction potentially contribute to the presence of HF symptoms. Therefore, treatment destined to improve LV diastolic and systolic function might be of great importance in the treatment of HFpEF to prevent the occurrence of HFrEF.

The major limitation of this study was the lack of a prospective evaluation to assess the prognostic differences between asymptomatic LVDD, HFpEF, and HFrEF. Long-term follow-up is needed to verify the prognostic value of LV dysfunction and dyssynchrony in HFpEF. Moreover, we only included HFpEF with a narrow QRS complex because the majority of our patients had a narrow QRS; further research should focus on the differences between HFpEF with both narrow and wide QRS complexes. Furthermore, the sample size was relatively small because it was difficult to recruit a sufficient number of HF patients from a single hospital. Hence, further multicenter studies with larger numbers of patients are needed to validate these findings.

In this study, we found the systolic dyssynchrony was shorter in patients with HFpEF than in HFrEF with narrow QRS, suggesting that resynchronization might not be a suitable management option for such patients. Moreover, the LV systolic function was significantly reduced in patients with HFpEF and HFrEF with a narrow QRS, and decreased LV diastolic and systolic function could effectively differentiate HF from asymptomatic LVDD patients. Therefore, management with the goal of improving LV diastolic and systolic function instead of resynchronization may be considered a possible therapeutic pathway for HFpEF.

The study was supported by National Natural Science Foundation of China (NO. 81401413) and Scientific Research of The First Hospital of China Medical University (Number:fsfh1312).

14. Nagueh SF, Smiseth OA, Appleton CP. et al. Recommendations for the Evaluation of Left Ventricular Diastolic Function by Echocardiography: An Update from the American Society of Echocardiography and the European Association of Cardiovascular Imaging. J Am Soc Echocardiogr. 2016;29:277-314