It is now well-established that malignant tumors are generated and maintained by a small group of cancer cells capable of self-renewal and multipotential differentiation. Such cells are referred to as CSCs or tumor-initiating cells, which are closely related to tumor onset, progression, metastasis, as well as resistances to chemotherapy and radiotherapy. Self-renewal is not only one of the most important characteristics differentiating CSCs from common cancer cells, but also the root cause for CSCs to maintain their “stemness” and for inducing metastasis and recurrence eventually. However, the regulatory mechanism for CSC self-renewal has not been fully clarified hitherto. Thereby motivated, we herein studied the molecular mechanism by which miRNA-19b/20a/92a promoted the self-renewal and proliferation of GCSCs.

This study has been approved by the ethics committee of our hospital. All experimental animals were given humane care to minimize their suffering.

Paraffin samples of gastric cancer and paracancerous tissues were preserved by Department of Pathology of our hospital. The patients with gastric cancer were followed up at regular intervals.

Gastric cancer cell lines SGC7901 and MKN28 were cultured in RPMI 1640 medium containing 10% FBS (v/v) in an incubator with 5% CO2 at 37°C. The above cells were digested with trypsin, and washed with PBS and serum-free DMEM. Then 1000 cells were collected, placed into a low-adhesion flask and cultured in serum-free high-glucose DMEM (including EGF and bFGF). The culture was terminated on Day 7, and then the cells were observed under an inverted microscope.

The tumor sphere cells that had been cultured for seven days were centrifuged, washed, and cultured in ordinary medium and medium containing FBS respectively. Afterwards, the adherent cells cultured for 8 h, 24 h and 72 h were digested and collected.

Small RNA was isolated from total RNA by microcentrifuge spin column. A poly (A) tail was added to its 3'-end and then ligated with an oligonucleotide tag. Hybridization reaction was conducted in 6× SSPE buffer containing formamide, after which monitoring was conducted using Cy5 fluorescent dye. Images were collected by a laser scanner to perform digitalized conversion using the Array-Pro image analysis software.

Lentiviral vector Pgcsil-008 (kl1496) was subjected to NheI digestion. Primers were synthesized. Target genes were amplified by PCR and competent cells were prepared. The PCR product was inserted into linearized lentiviral vectors for transformation, cloning and sequencing. Transient transfection was made for the prepared cell suspension.

The cells with stable expressions of miRNA were cultured and centrifuged to prepare a single cell suspension which was cultured in serum-free DMEM (including EGF and bFGF). The cells were added with 5-fluorouracil on the second day of culture and dimethyl sulfoxide on the second day of treatment, and detected after culture by a microplate reader.

The transiently transfected cells were collected by centrifugation, washed with PBS, incubated with 20 μL of antibody, and washed again with PBS before detection.

SGC7901-Luc cells stably expressing miRNA were digested, centrifuged, washed twice with PBS, once with serum-free culture medium and once with serum-free DMEM containing 20 ng/ml EGF and 10 ng/ml bFGF. Then 1000 cells were counted, added in low-adhesion culture plates, and cultured in serum-free DMEM containing 20 ng/ml EGF and 10 ng/ml bFGF for one week. Afterwards, the cells were collected by centrifugation, of which 2000 were injected into the back of NOD-SCID mice to observe tumor growth. Every three days, the tumor fluorescent intensity was observed by using IVIS 100 Imaging System 2 min after 100 mg/kg D-luciferin was injected.

The cells in logarithmic growth phase were cultured in culture plates (1000 cells per well), and transient transfection was conducted 24 h later. After 24 h of transfection, dimethyl sulfoxide was added to the wells every day for 30 min-4 h of culture, and then they were detected by a microplate reader.

One hundred cells were seeded in 6-well plates and cultured until typical colonies formed. The cell colonies were counted under an inverted microscope after fixing and staining (a colony contained over 50 cells).

Primers for the 3' untranslated regions of HIPK1 and E2F1 were designed. The PCR-screened primers were ligated to the p GL3 luciferase reporter gene vector.

The cells were digested with trypsin, spread evenly into 6-well culture plates by using siPORT transfection reagent (Ambion, USA), miRNA precursor and miRNA inhibitors according to the technical manual.

Cells in the logarithmic growth phase were inoculated into 24-well plates at the density of 5×105 and cultured to 80% confluence. Subsequently, each well was added successively with 0.2 μg, 0.4 μg, 0.8 μg plasmids, 100 ng PM, 5 ng PRL-TK internal reference vector, 2 μL of LipofectaminTM and 200 μL of serum-free culture medium. Forty-eight hours after transfection, the supernatant was aspirated and each well was washed with PBS. Afterwards, 200 μL of lysis buffer was added into each well and centrifuged at 12,000 rpm for 10 min, and the supernatant was collected into a clean centrifuge tube. Then 20 μL of supernatant and 100 μL of luciferase assay reagent II (LARII) were mixed to detect the firefly luciferase activity on TD-20/20 Luminometer. The Renilla luciferase activity was detected after addition of 100 μL Stop & Glo™ reagent. All activities were normalized based on the Renilla luciferase activity. Average of the activities of three samples was used, and each experiment was repeated twice.

Protein samples were mixed with a quarter of volume of 4× SDS loading buffer, and denatured at 95°C for 10 min. Then 20 μL of protein sample per lane was loaded for SDS-PAGE.

After the electrophoresis, the gel was equilibrated in transferring buffer for 10 min and thereafter transferred onto the NC membrane with the semi-dry method at 0.8 mA/cm2 for 20-30 min. Subsequently, the membrane was stained with Ponceau staining solution. After the positions of target protein bands were marked with a marker pen, the staining solution was rinsed with deionized water. The membrane was then blocked in TBS containing 10% skimmed milk (10 mmol/L Tri-base, 150 mmol/L NaCl) for 1 h at room temperature, and incubated with rabbit anti-human E2F1 polyclonal antibody (1:1000 diluted by TBS containing 10% skimmed milk), mouse anti-human β-actin monoclonal antibody (1:10000), mouse anti-human HIPK1 monoclonal antibody (1:500) and mouse anti-human β-catenin monoclonal antibody (1:2000) overnight at 4°C. Then the membrane was washed with TBST (10 mmol/L Tri-base, 150 mmol/L NaCl, 0.1% Tween20, pH 8.0) 5 times by shaking at room temperature (5 min each time), incubated with HRP-labeled secondary antibody that had been diluted with TBS containing 10% skimmed milk for 2 h at room temperature, washed with TBST 5 times by shaking (5 min each time), color-developed using an ECL system and developed by developing device. The gray values of protein bands were detected by Quantity One (BioRad, USA), with the ratio of the gray value of a target band to that of β-actin as the index to compare the target protein expressions.

All data were analyzed by SPSS 20.0. The continuous variables were compared by analysis of variance. The inter-group differences with significant variance homogeneity were detected by Mann-Whitney U and Kruskal-Wallis H tests.

As listed in Table 1, the expressions of miRNA-19b, miRNA-92a and miRNA-20a, the members of miRNA-17-92 gene cluster, gradually decrease along with the adherence and differentiation of tumor spheres.

Overexpression of lenti-miRNA-19b/20a/92a significantly boosted the ability of GCSCs to form tumor spheres in which the number of cells evidently increased (Figure 2).

CSCs can resist chemotherapeutic agents, leading to multi-drug resistance and secondary recurrence. After treatment with anti-gastric cancer drug 5-fluorouracil, the survival of lenti-miRNA-19b/20a/92a-infected cells was prolonged compared with that of control (Figure 3). 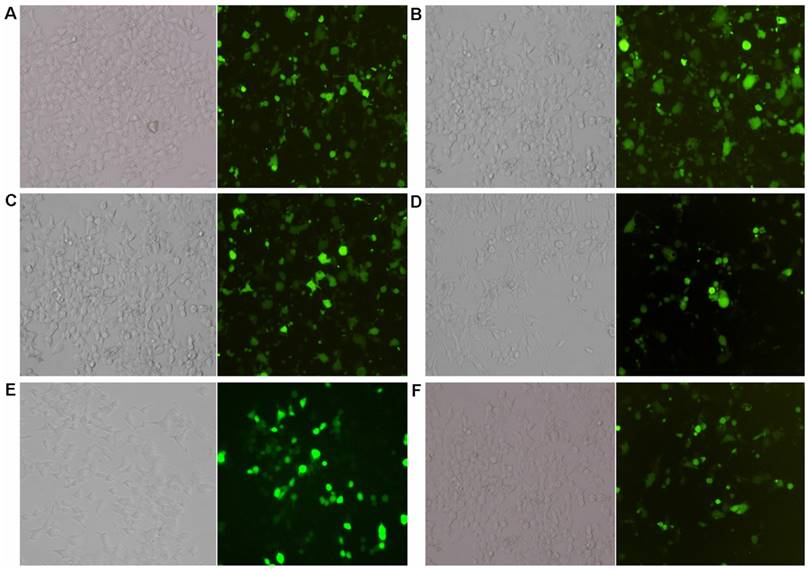 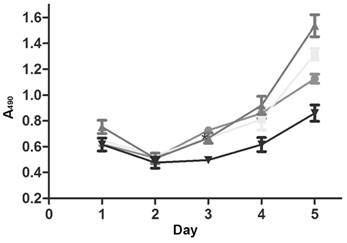 Twenty-eight days after injection of lenti-miRNA-19b/20a/92a-infected cells, each mouse formed tumor in the back, as evidenced by the fluorescence signals (Figure S2). In contrast, only one mouse in the lenti-NC group did so (P<0.05). 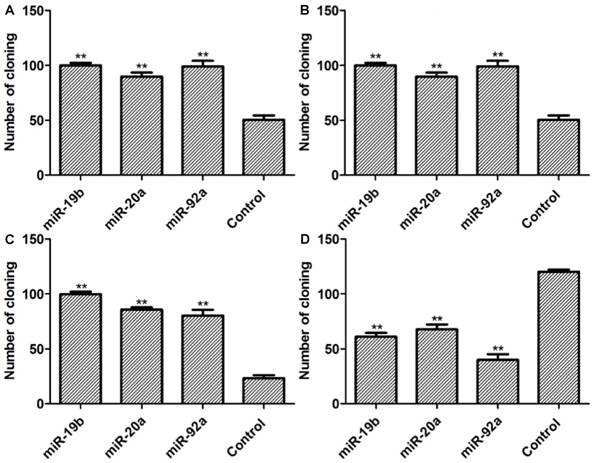 We also evaluated the effects of miRNA-17-92 on the proliferation of GCSCs in vivo. The mice injected with miRNA-19b/20a/92a had significantly higher tumor formation capacities than those of NC mice (Figure S3). 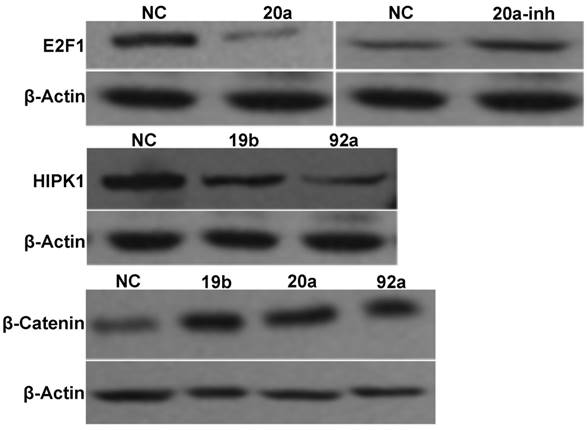 Malignant tumor tissue, as a heteroplasmon, consists of cells at different stages of differentiation, of which there are a small number of stem cell-like cells with renewal and differentiation potentials, referred to as CSCs. CSCs are typified by specific markers within tumors, which can form xenografts in immunodeficient mice [10]. Han et al. [11] cultured gastric cancer cells and isolated those with specific markers, which were subcutaneously implanted into rats to form tumors, suggesting the existence of GCSCs.

Until now, gastric cancer still cannot be well treated mainly because some GCSCs escape chemotherapy drugs, which has become one of the main reasons for recurrence and metastasis [12]. Targeted therapy provides new hope for gastric cancer patients, and eligible drugs should be able to inhibit the damage to GCSCs without affecting normal cells. Whether GCSCs markers can become suitable targets needs further studies [13, 14]. Yashiro et al. [15] found that inhibition of c-met gene increased the sensitivity of GCSCs to chemotherapy. GCSCs are also closely related to the prognosis of gastric cancer, and high expression of CD44+ stem cell-like cells can predict biological invasion behaviors, also as an independent predictor for treatment outcomes [16]. Golestaneh et al. [17] reported that GCSCs had different mRNA expression levels in the tumorigenic process, and that these mRNAs were involved in the biological regulation of cancer cells [18-20].

In addition, bioinformatics analysis revealed another inhibitory molecule of the Wnt/β-catenin pathway, HIPK1, which was also a potential target gene of miRNA-17-92 gene cluster. HIPK1 can suppress the activation of Wnt/β-catenin in embryonic kidney cells. Moreover, many Wnt/β-catenin-related genes need the activation of HIPK1 in the development of the stomach. In this study, we not only proved by the reporter gene assay and Western blot that HIPK1 was a target gene of miRNA-17-92, but also found that transfection with precursors elevated the expression of β-catenin. Based on this, we hypothesized that miRNA-17-92 gene cluster may indirectly activate the Wnt/β-catenin pathway through directly targeting E2F1 and HIPK1, increasing the number of EpCAM+ GCSCs simultaneously. Indirectly activating Wnt/β-catenin and increasing the number of EpCAM+ GCSCs may be one of the mechanisms by which miRNA-17-92 promotes the self-renewal of GCSCs, so in-depth studies are still in need.

In summary, miRNA-19b/20a/92a genes were continuously deleted during the differentiation of GCSCs, and miRNA-17-92 gene facilitated their renewal and proliferation. Meanwhile, miRNA-19b/20a/92a promoted GCSCs self-renewal by targeting E2F1 and HIPK1 at the post-transcriptional level and activating the β-catenin signaling pathway. The expressions of miRNA-20a and miRNA-92a in gastric cancer samples were negatively correlated with the prognosis of patients. miRNA-92a was an independent factor and index predicting the prognosis of gastric cancer.