Our study provided several potential therapeutic targets for triple negative and BRCA1 mutated breast cancers. It seems that migration and mesenchymal properties acquisition of basal-like breast cancer cells is a key functional pathway in these tumors with a high metastatic potential.

Basal like breast cancers (BLBC) represent between 10 and 20% of breast cancers. They are associated with an aggressive phenotype, high histological grade, poor clinical behavior, and high rates of relapse (1). This cancer subgroup is characterized by lack of estrogen receptor (ER), progesterone receptor (PR), and HER2 amplification (TNBC: triple-negative breast cancers) with expression of basal cytokeratins 5/6, 14, 17, epidermal growth factor receptor (EGFR), and/or c-KIT. Currently, BLBC lack any specific targeted therapy, due to the fact that they do not express ER or HER2 and thus are typically refractory to endocrine therapy and to trastuzumab, a humanized monoclonal antibody that targets HER2.

The identification of new markers and therapeutic targets is thus necessary for this bad prognosis cancer type. First, BRCA1-associated BC are mostly BLBC (2) and sporadic BLBC (occurring in women without germline BRCA1 mutations) often show dysfunction of the BRCA1 pathway. The characteristics of hereditary BRCA1-associated BC found in sporadic BLBC cancers have thus been termed «BRCA-ness» with potential clinical implications (3). As BRCA1 pathway may be deficient in BLBC, these tumors may respond to specific therapeutic regimens, such as inhibitors of the poly (ADP-ribose) polymerase (PARP) enzyme (4). Cells deficient in BRCA1 have indeed a defect in the repair of DNA double strand breaks which could make them particularly sensitive to the chemotherapy drugs that generate such breaks, such as inhibitors of PARP enzyme. However, not all BLBC are associated with BRCA1 inactivation.

All these subclassification of triple negative breast cancers were identified by studying transcriptomic profiles. Epigenetic modifications in breast cells could also allow identifying characteristics of these breast cancers. Roll et al. reported a hypermethylator phenotype in BLBC, characterized by methylation-dependent silencing of CEACAM6, CDH1, CST6, ESR1, GNA11, MUC1, MYB, SCNN1A, and TFF3 genes that are involved in a wide range of neoplastic processes relating to tumors with poor prognosis (8).

Our results of Methyl-Seq did not confirm this hypermethylator phenotype but we could not identify hypermethylated BLBC specific genes. On the other hand the RNA-Seq data allowed us to identify antioxidation and cell migration as specifically activated pathways in basal-like breast cancer cells.

The main characteristics of the cell lines used are presented in table 1. MDA-MB-231 and HCC1937 human breast cancer cell lines were purchased from the American Type Culture Collection (Rockville, MD, USA) and were grown in RPMI medium supplemented with 10% foetal calf serum, 2 mM L-glutamine and 20 μg/ml gentamicin. SUM149 and SUM1315 human breast cancer cell lines were obtained from Asterand (Hertfordshire, UK) and grown in Ham's F12 medium according to the manufacturer's instructions. SUM1315MO2 cells were transfected with a pLXSN plasmid containing the full-length BRCA1 cDNA using Fugene 6 transfection reagent (Roche Molecular Biochemicals). Control cells were transfected with the pLXSN empty vector. After selection in 721.5 µM G418 (Sigma Aldrich), clones were tested for BRCA1 expression by Western blotting (9). All cell lines were grown at 37˚C in a humidified atmosphere containing 5% CO2. All our cell lines are stored and managed by the CJP Biological Resources Center (BB-0033-00075).

Cells were fixed in Preservcyt solution (Thinprep) and cytoblocks were prepared with Shandon Cytoblock kit (Thermo Scientific). Hormone receptors (ER and PR), HER2, EGFR and cytokeratin status were studied as already described (5). The immunostainings were scored semi-quantitatively by an expert pathologist under a light upright microscope.

Main characteristics of the cell lines.

Sequence reads were aligned on the human genome (hg19) with GS Reference Mapper software (Roche) and mapped on the human exome using a home-made software named AGSA. Data was then normalized by calculating the 'reads per kilo base per million mapped reads' (RPKM) for each gene. When the RPKM value was below the threshold of 0.3, then it was considered as background noise and replaced by zero.

Validation of gene regulation by q-RT-PCR

Sequence reads were aligned on the human genome (hg19) with GS Reference Mapper software (Roche) and mapped on the human proximal promotors using a home-made software named AGSA. Data was then normalized by calculating the 'reads per million mapped reads' (RPM) for each gene. When the RPM value was below the threshold of 0.3, then it was considered as background noise and replaced by zero.

Both clinical and RNA sequencing data (Illumina HiSeq RNAseq Version 2 data) of invasive breast cancers were downloaded from The Cancer Genome Atlas (TCGA) database. A total of 449 patients with information on ER, PR and HER2 status were selected to compare the expression profiles of genes in the respective tumors. 71 cases were found to have a negative ER, PR end HER2 phenotype (i.e., triple-negative), whereas 371 cases were positive for at least one of these receptors.

Data standardization. The distribution of transcriptome and methylome data are represented in boxplot. For most of the cell lines, the distribution has many values ​​close to zero and a minority of extreme values. 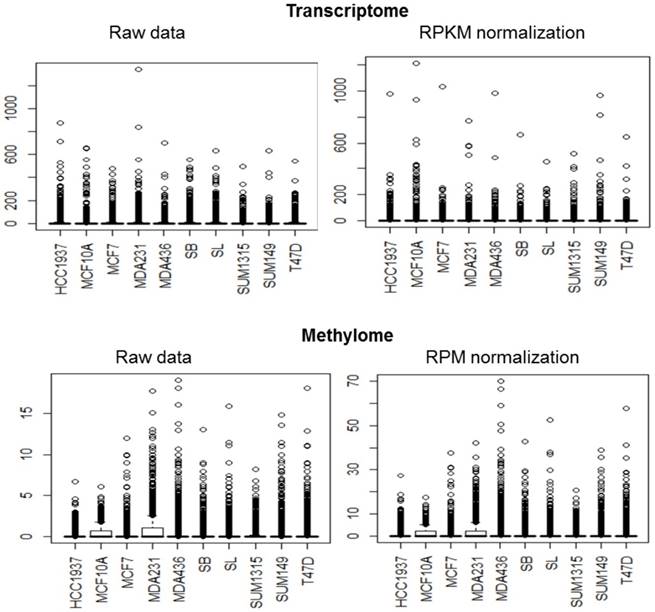 Summary of transcriptome and methylome data.

First we investigated how breast cancer cell lines clustered by RNA-Seq and Methyl-Seq.

For RNA-Seq, a hierarchical clustering on the RPKM normalized RNA-Seq data was generated from Euclidean distances according to Ward's method (Fig 2). This hierarchical clustering was performed for the base matrix (Fig 2A), the log normalized data (Fig 2B), the standardized data (Fig 2C) and the log-standardized data (Fig 2D). This showed that whatever the normalization, the SUM1315 lines, SB and SL are always classified together, like the two luminal T47D and MCF7 cell lines. As already observed with RNA microarrays, transcriptomic analyse by RNA-Seq thus allowed to separate luminal and basal-like breast cancer cells.

In contrast, the benign MCF10A line appears to be different from the tumor lines only for the base matrix (Fig 2A). This is in agreement with the fact that this cell line was classified as basal-like in several studies (6,11).

For Metyl-seq, a hierarchical clustering on the RPM normalized Methyl-Seq data was generated from Euclidean distances according to Ward's method (Fig 3). This hierarchical clustering was performed for the base matrix (Fig 3A), the log normalized data (Fig 3B), the standardized data (Fig 3C) and the log-standardized data (Fig 3D). Metyl-seq data were neither massively influenced by breast cancer subtype nor by BRCA1 mutation. It seems like MDA231 and MDA436 present a hypermetylated phenotype. These two cell lines have thus a higher mean of methylation (1.535 and 1.343 versus 0.7 to 0.95 for all the other cell lines).

Search for genes most significantly regulated

To determine whether the data are normally distributed, a Kolmogorov-Smirnov test was performed by taking as reference the normal distribution on basic matrix (data), normalized log (data log), centered reduced (data C & R) and centered reduced normalized log (log data C & R). For transcriptome and methylome data, the p-value was less than 2.10-16 for the four matrices. Thus, the p-value is very significantly lower the first degree risk α, set at 0.01. It is recognized that the data does not follow a normal distribution. Wilcoxon non-parametric statistical test was thus performed for each gene to select genes significantly regulated between two groups of cell lines. 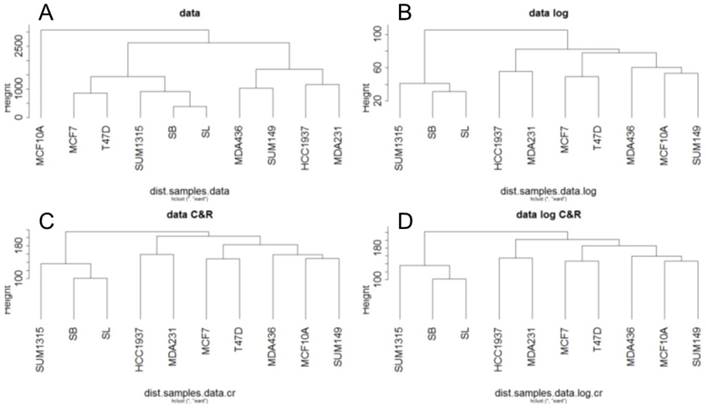 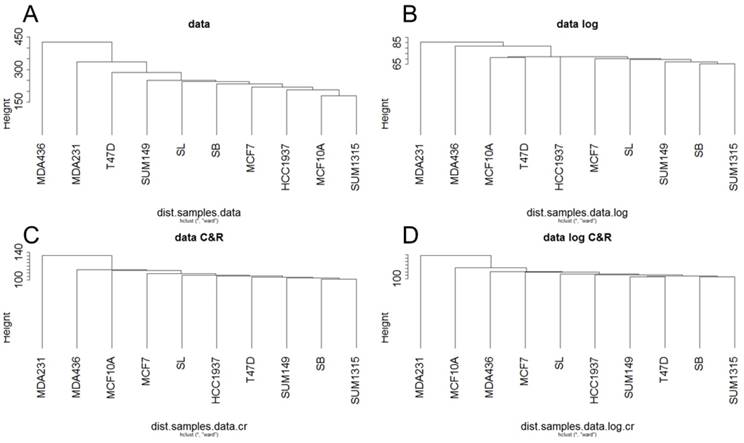 Comparison of RNA-Seq and immunohistochemistry data.

For the genes used for clinical classification of basal-like breast cancers, we could compare our RNA-Seq data to immunohistochemistry results (Table 3). A very good correlation was observed between mRNA expression analysed by RNA-Seq and protein expression studied by immunocytochemistry.

With the objective of identifying new therapeutic targets for basal-like breast cancers, we selected genes that were highly expressed (>10 RPKM) and significantly up-regulated in basal cell lines. This reduced the list to 77 candidate genes (Table 4). Thanks to the expression data extracted from the TCGA project "Breast Invasive Carcinoma", we confirmed significant overexpression for 48 genes of this list in triple negative breast tumors compared to non triple-negative breast tumors. Among them, some have already been described as basal-like markers, such as Annexin A1 (12,13) and Vimentin (14,15).

# : genes that are significantly overexpressed in triple negative breast cancers in the TCGA RNAseq data.

We found 9 genes that were overexpressed both in basal-like cell lines compared to luminal cell lines and in BRCA1 mutated (SL) compared to BRCA1 restored (SB) cell lines (Fig 5A). We performed q-RT-PCR experiments in order to validate these overexpressed genes. For 7 of these genes, we could validate higher expression in basal-like cell lines (Figure 5B) and in BRCA1 mutated cell line (Figure 5C). These 7 genes can be considered as basal-like biomarkers and potential therapeutic targets, particularly in BRCA1-mutated cancers. Above these genes, four are linked to cytoskeleton and could thus be implicated in epithelial cell migration: VIM, ITGB1, RHOA and TUBB6.

Our study tested RNA-Seq and Methyl-Seq as sensitive methods to categorize breast cancer tumor cells. We found that Methyl-Seq is not an appropriate method to differentiate breast cancer subtypes. The weak quantity of data generated with our technology is a limit that could probably be overcome with the latest generations of sequencers. Nevertheless it seems that the subtypes of breast cancers do not broadly influence genome methylation. Among the genes published by Roll et al.(8), only ESR1 was found to be methylated in the MDA-MB-231 and MCF10A cell lines. We also observed a specific profile of the MDA-MB-231 and MDA-MB-436 cell lines, which appear to be globally hypermethylated. Deeper study will be needed to understand why these cell lines are hypermethylated. 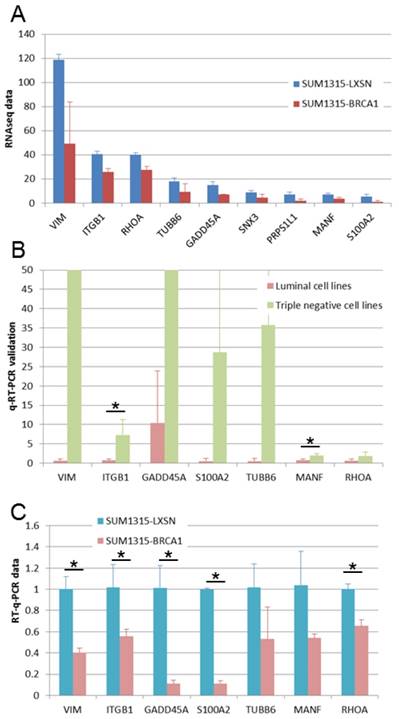 By contrast, RNA-Seq was proven as a reliable method for breast cancer classification. We showed that different subtypes could be separated by global gene clustering. Moreover transcript expression analyzed by RNA-Seq was shown to correlate with protein expression evaluated by immunohistochemistry. With the steady decrease in sequencing prices, RNA-Seq could become the standard method for the molecular characterization of breast tumors. This could make it possible to propose a personalized treatment according to the therapeutic targets overexpressed in the tumor.

Furthermore, genes involved in cell oxidation regulation were also found to be overexpressed in basal-like breast cancers. GPX1 codes for glutathione peroxidase 1 that protects cells against oxidative stress. A polymorphism of this gene has been associated to breast cancer risk (19). The PARK7 gene (also known as DJ-1) is involved in neuron protection against oxidative stress and cell death. It was recently shown to interact with HER3 receptor (20). For these two genes, our results showed at least a 3 fold overexpression in basal-like breast cancer cell lines but in TCGA triple negative breast tumors this overexpression was not confirmed. For SOD1, PRDX1 and MGST3, triple negative cell overexpression was observed both in our cell lines and in TCGA tumors. MGST3 is another gene belonging to antioxidant system shown to be overexpressed in some melanomas (21). Superoxyde dismutase 1 is an enzyme coded by the gene SOD1. It has already been suggested as a potential anti-cancer drug (22,23). At last, PRDX1 has a controversial role in oxidization-reduction balance and its expression seems to be up-regulated in breast cancer tissues (24). Oxydative stress could thus be targeted in basal-like breast cancers. This therapeutic strategy has already been proposed in other types of cancer (25,26).

The results published here are in part based upon data generated by the TCGA Research Network: http://cancergenome.nih.gov/. We used the PANTHER classification system to analyze RNA-Seq data (10).