Postoperative immune suppression particularly a loss of cell-mediated immunity is commonly seen after surgery due to an increased release of immune suppressing hormones such as catecholamines, prostaglandins and cortisol depending on the amount of surgical stress and tissue damage [1, 2]. Blood transfusion, hypothermia, dehydration and anesthetics can further attenuate immunity [3-6]. An impaired immunity after surgery is associated with worse outcome, i.e. delayed wound healing, infections, sepsis, multiple-organ failure and cancer recurrence [1, 7-12]. In particular, postoperative immunosuppression comprises decreased numbers of natural killer (NK) cells, T lymphocytes, as well as an impaired function of T lymphocytes and monocytes including a suppressed expression of human leukocyte antigen-D related on monocytes (mHLA-DR) [1, 13-19]. B lymphocytes seem to be less effected [1, 20]. Furthermore, increasing numbers of T regulatory (Treg) cells and neutrophils often occur after surgery [13, 21]. While major surgery may suppress cellular immunity for several days, humoral immunity remains relatively intact [8]. However, the recovery of immune cells focusing on differences between innate and acquired immunity during severe postoperative immunosuppression has not been investigated, yet.

This retrospective subgroup analysis of a previously published study of our research group [22, 23] investigated innate and acquired immune cells as well as monocytic and T cell immune function during severe postoperative immune suppression (mHLA-DR ≤ 10,000 antigens per cell on pod1) that were measured in 10 out of 20 patients of the placebo group of the bigger cohort until pod5 after elective esophageal or pancreatic resection (measurement had to be stopped after 10 patients for economic reasons, no selection of the patients; Figure 1). All patients received guideline-based anesthesiological and surgical treatment according to our standard operating procedures [24].

Measurement of parameters of immune function

Consort diagram. 10 patients of the placebo group were analyzed in this subgroup analyses: immune cells and functional parameters were determined in these patients without any prior selection. 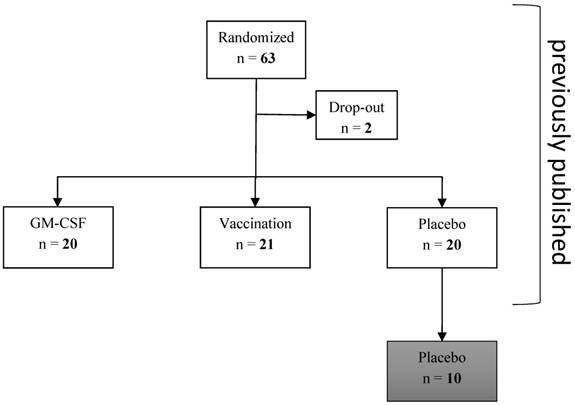 Data were expressed according to their scaling as arithmetic mean ± standard deviation (SD), median [25%, 75% quartiles], or frequencies [%]. After exploratory data analysis, all tests were accomplished by means of non-parametric exact statistical tests. Longitudinal data were analyzed using nonparametric univariate procedures. For each immune parameter, we first tested over all six time points (od until pod5). In a second step, we determined the first significant postoperative alteration by comparing postoperative and presurgical values. The specific time point was then compared with further time points to determine the recovery of immune parameters, i.e. a significant decrease respectively increase after a significant postoperative alteration. A two-tailed p-value < 0.05 was considered statistically significant. All tests should be understood as constituting exploratory data analysis, so that no adjustments for multiple testing have been made. Numerical calculations were performed using IBM© SPSS© Statistics, Version 23.

Basic patient characteristics, intraoperative- and outcome parameters are shown in Table 1. Some of the results were already shown to analyze group differences after postoperative immune stimulation [23].

The major finding of this subgroup analysis is that innate immunity recovered earlier than acquired immunity during severe postoperative immunesuppression. To the best of our knowledge, no other study has investigated differences in recovery between innate and acquired immune cells during severe postoperative immunosuppression after major cancer surgery, yet. 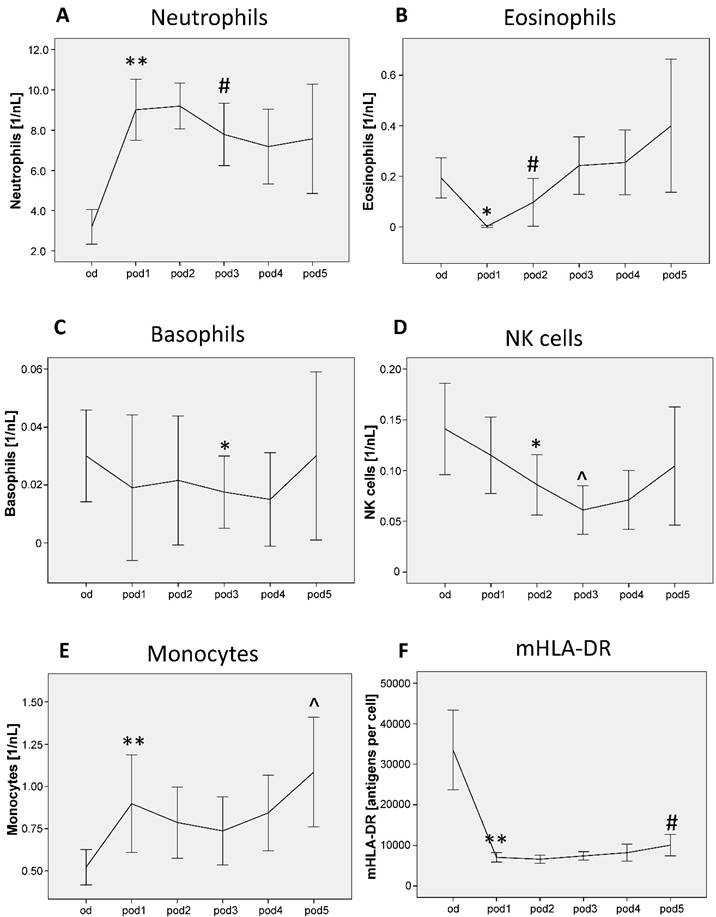 TNF-α and IL-10 release of LPS-stimulated monocytes from day of surgery before surgery (od) until day 5 after surgery (pod5). TNF-α decreased on pod2 and recovered on pod5, IL-10 decreased on pod3 and recovered on pod5. *P<0.05 represents the first significant differences between pre- and postsurgical values. #P<0.05 represents recovery, i.e. the first significant in- respectively decrease after significant postoperative alteration. Error bars with 95% confidence intervals.

In general, innate and acquired immune defense play a key role in eliminating of infective pathogens and malignancies. When stimulated by pathogens, immune cells of the innate immune system produce cytokines and other co-stimulatory molecules, whereas the adaptive immune system is essential for immunologic memory and release of antibodies for more specific immune responses [26]. Interactions between innate and acquired immunity, i.e. monocytes and T lymphocytes with antigen presentation and consequent T cell response are essential for adequate immune function [27]. Particularly in postsurgical patients, profound immune alterations occur with a highly attenuated and restricted immunity [1], which can be measured by a decreased mHLA-DR [12].

We included immune suppressed patients with a mHLA-DR concentration not higher than 10,000 antibodies per monocyte on day one after surgery, which indicates a highly suppressed immune function. Therefore, all patients showed a postoperative immune suppressed state: counts of basophils, eosinophils, NK cells, lymphocytes except of B cells, as well as function of monocytes (mHLA-DR, TNF-α and IL-10 release of LPS-stimulated monocytes) and T cells (IFN-γ release after stimulation) decreased, whereas counts of neutrophils and monocytes increased. Immune alterations during the postoperative period are well described and in accordance with our findings [1, 13-19].

The exact pathological mechanism for an impaired postoperative immune function is still speculative. Perioperatively secreted catecholamines and prostaglandins are assumed to be a major cause of postoperative immune suppression following anesthesia [2, 6]. Latest research suggests that so-called alarmins released depending on tissue damage might lead to a pronounced pro-inflammatory response [28]. The initial pro-inflammatory response aims to activate immunity to the site of injury and induces a systemic anti-inflammatory state whose physiological effect should prevent the formation of inflammatory tissue and organ damage with the negative effect of leading to a pronounced postoperative immunosuppression [29].

We found an earlier recovery of innate immune cells compared to acquire immune cells. Concretely, innate immune cells recovered on pod2 (eosinophils), pod3 (neutrophils) and pod5 (monocytic function), whereas counts of acquired immune cells (lymphocytes, T cells, T helper and cytotoxic T cells) did not recover until pod5. B cells did not decrease postoperatively. In the present study, we additionally investigated changes in lymphocyte subsets in patients with postoperative immunosuppression. Our findings suggest that the homeostasis of T cells is perturbed in immune suppressive patients after surgery. The decreased numbers of T cells in peripheral blood of immunosuppressed patients may reflect an increased rate of apoptosis of these cells. Clinical research showed an influence of surgical procedures on circulating blood lymphocyte apoptosis [30]. Considering functional parameters of T cells, Th1 specific cytokines were decreased and Th2 specific cytokines were unchanged on day one after surgery, which suggests an anti-inflammatory state immediately postoperatively. The imbalance of Th1 and Th2 cytokines is associated with an increased susceptibility to postoperative infections [31]. Our results therefore suggest that particularly acquired immune cells are highly vulnerable to postoperative immunosuppression, and compared to innate immune cells remain suppressed for a longer period of time.

It is of major importance to minimize postoperative immunosuppression due to its high impact on outcome regarding sepsis and cancer recurrence [8, 9, 11]. Adequate perioperative pain control particularly epidural analgesia was shown to reduce postoperative immune suppression after major abdominal surgery [32]. Furthermore, perioperative hypothermia must be avoided [5]. Another approach might be postoperative immune stimulation, which was shown to reduce infection days [22]. The impact of this stimulation on cancer metastases and recurrence is unknown and should be further investigated. 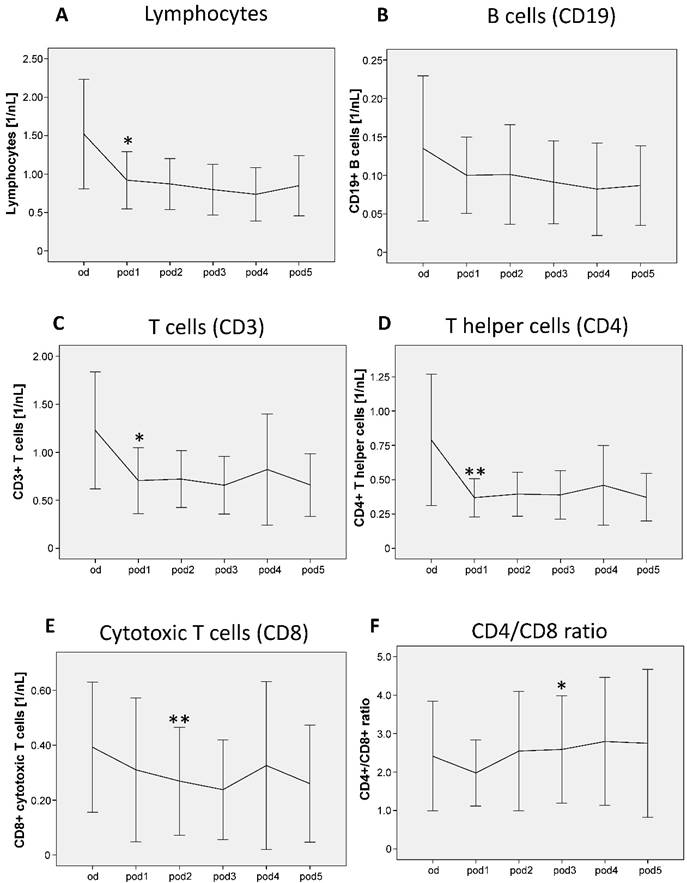 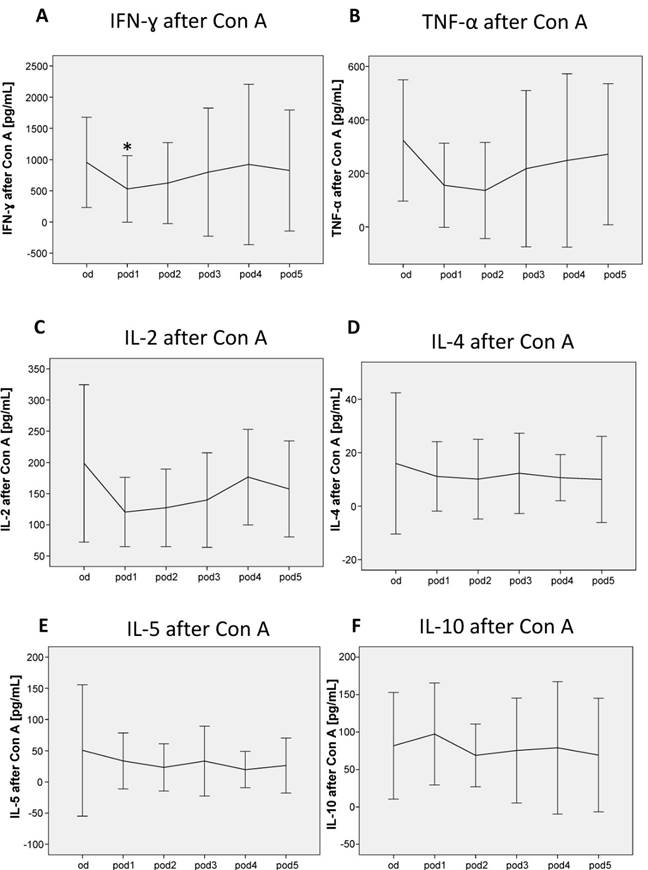 This study reveals several limitations. First of all, it is a retrospective subgroup analysis. Secondly, we analyzed only a small sample size of 10 patients, i.e. some results might possibly be not significant. Thirdly, patients were analyzed only until pod5. The course of immune cells and function after this period is unknown. Finally, the optimal threshold level for mHLA-DR (≤ 10,000 mAb/cell in our study) used to stratify patients with severe surgery-induced immunosuppression is unclear. Studies suggest values between 5,000 and 10,000 mAb/cell as indicator of severely impaired immune function in critically ill patients [25, 33, 34].

Con A: Concanavalin A

We are very grateful to Kathrin Scholtz for monitoring this study, to Anja-Vanessa Philippeit, Dominik Stöber, Julia Schäfer, Carolyn Geipel and Kay Dittrich for data acquisition and help with the database. We thank Victoria Windmann for her help with the manuscript.

This clinical trial was approved by the Ethics Committee of the Landesamt für Gesundheit und Soziales Berlin (LaGeSo), Germany (ref ZSEK15287/08) on September 01, 2008. The study further meets the requirements set out by the ICH-GCP, Declaration of Helsinki and the German Drug Law (AMG). Written informed consent was obtained from the patients.

Due to legal restrictions imposed by the Ethics Committee of the Landesamt für Gesundheit und Soziales Berlin (LaGeSo) and the data protection commissioner of the Charité, public sharing of study data with other researchers or entities is not allowed. Requests may be sent to dai-researchdata@charite.de.