Lung cancer is the leading cause of cancer-related mortality worldwide, particularly in highly developed counties [1]. It has been classified histologically into two major groups: small-cell lung cancer and non-small-cell lung cancer (NSCLC). Adenocarcinoma, squamous cell carcinoma, bronchioalveolar carcinoma, and large cell carcinoma are the subtypes of NSCLC. More than 80% of NSCLC cases are of the adenocarcinoma subtype (AC-NSCLC), whose incidence rate has steadily increased over the past decade. Approximately 65% of these cases are diagnosed at an advanced stage [2]. The standard therapies for lung adenocarcinoma include epidermal growth factor receptor (EGFR) mutation targeted therapy and conventional chemotherapy, such as platinum- and pemetrexed-based chemotherapies.

Several biomarkers have been used to predict treatment responses, such as the EGFR mutation status for targeted therapy or the excision repair cross-complementation group 1 (ERCC1) and thymidylate synthase (TS) expression for conventional chemotherapy [3-8]. Mutations in the EGFR tyrosine kinase (TK) domain were first reported in 2004 [9], and were found in approximately 50% of Asian patients with NSCLC [10]. With the introduction of personalized treatments, molecular target agents, such as EGFR-TK inhibitors (TKIs) have been used in clinical practice for the treatment of advanced NSCLC. Many randomized controlled trials of patients with active EGFR mutations have demonstrated the superiority of the TKI therapy over conventional cytotoxic drug treatments in terms of progression-free survival, the objective response rate, and overall survival (OS) [11-15]. In the Iressa Pan-Asia study (iPASS), the first-line EGFR-TKIs treatment was found to have a significant OS benefit to unselected patients with NSCLC, compared with those who received conventional chemotherapy [16]. Therefore, EGFR-TKIs have been used as the standard first-line treatment for patients with NSCLC, particularly for AC-NSCLC with active EGFR mutations. However, the subgroup analysis in the iPASS revealed that conventional chemotherapy exhibited surprisingly good efficacy in the active EGFR mutation group [16]. Therefore, conventional cytotoxic drug-based chemotherapies have become the standard second-line treatment for patients with lung adenocarcinoma after TKI therapy failure.

Platinum-based chemotherapy is a DNA damage therapy for NSCLC. ERCC1 is a rate-limiting factor of the nucleotide excision repair (NER) system, which is involved in the repair of cytotoxic platinum-DNA adducts [17]. Therefore, high ERCC1 expression has been associated with resistance to platinum-based chemotherapy in various tumors, including NSCLC [18-20], whereas ERCC1-negative NSCLC has been associated with higher survival rates after platinum-based chemotherapy [21]. TS is an enzyme that catalyzes the conversion of deoxyuridine monophosphate to deoxythymidine monophosphate. Pemetrexed is a folate antimetabolite that is chemically similar to folic acid and inhibits enzyme activity, and thus contributes to DNA damage. High TS expression is involved in a resistance mechanism and may be a predictive biomarker of pemetrexed sensitivity in NSCLC [22, 23]. Pemetrexed-based chemotherapy is used as a first-line treatment and has been currently approved as the first-line treatment for patients with nonsquamous cell histology in combination with platinum [24]. However, the association of ERCC1 and TS expression with the prognosis of AC-NSCLC with different EGFR mutation statuses is yet to be elucidated.

To understand the clinical significance of these biomarkers, including the EGFR mutation status and TS and ERCC1 expression, in terms of treatment outcomes, 131 patients with AC-NSCLC who received the TKI therapy and pemetrexed- and platinum-based chemotherapies were evaluated. The correlation between treatment response as well as OS and the three biomarkers, was also investigated.

In total, 131 patients with AC-NSCLC were enrolled. First, patient clinical information, including age, sex, smoking status, and the order of receiving TKI therapy and conventional chemotherapies, was collected. The EGFR mutation status of all patients was evaluated before initiation of the TKI therapy or chemotherapy, and therapy was provided according to their EGFR mutation status. Specifically, patients with positive EGFR-mutated AC-NSCLC received the TKI therapy as the first-line treatment and pemetrexed- and platinum-based chemotherapies as the subsequent second-line treatment after TKI therapy failure. By contrast, patients with negative EGFR-mutated AC-NSCLC were administered the pemetrexed- and platinum-based chemotherapies as the first-line treatment followed by EGFR-TKI targeted therapy as the second-line treatment. To evaluate patients' OS, chest computed tomography was performed every 3 months. The treatment response was evaluated according to the guidelines of Response Evaluation Criteria in Solid Tumors (version 1.1) [25]. OS was defined as the period from the initiation date of TKI therapy or chemotherapy to the date of death or last patient contact. This study was approved by the Institutional Review Board of Show Chwan Memorial Hospital (IRB No. 1030110), and all experiments, procedures, and methods were performed in accordance with the IRB-approved guidelines and regulations.

All tumor DNA samples were obtained and extracted from paraffin-embedded blocks prepared on initial diagnosis. The DNA sequences of exons 18-21 of EGFR were determined by direct sequencing of the polymerase chain reaction (PCR) product as previously described [26, 27]. EGFR positive mutation results were confirmed by sequencing an independent PCR product. In the present study, the absence of EGFR mutation was defined as “negative,” whereas all EGFR alteration types, including L858R and exon 19 deletion, were defined as “positive.”

Scoring of TS and ERCC1 expression

A chi-squared test was performed to assess the correlation between clinical parameters and the EGFR mutation status and ERCC1 and TS expression; specifically, the Fischer exact test was used because of the small sample size. Survival curves were plotted using the Kaplan-Meier method, and statistical significance was determined using the log-rank test. Cox proportional hazards regression analysis and all statistical analyses were performed using SPSS for Windows (version 12; SPSS, Inc., Chicago, IL, USA). A two-sided p value of < 0.05 was considered statistically significant. 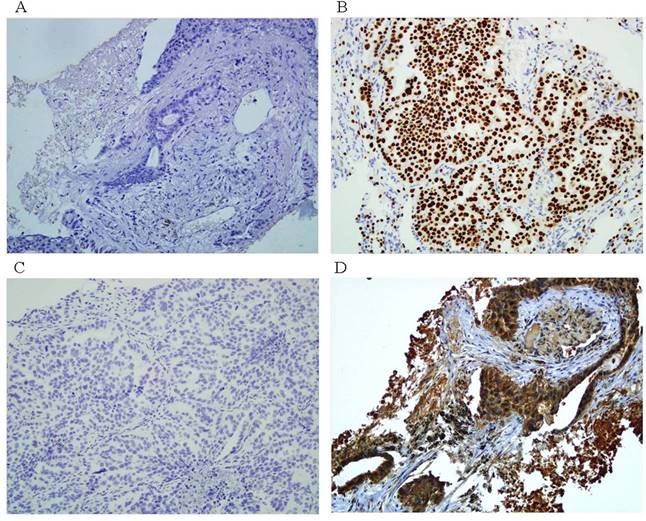 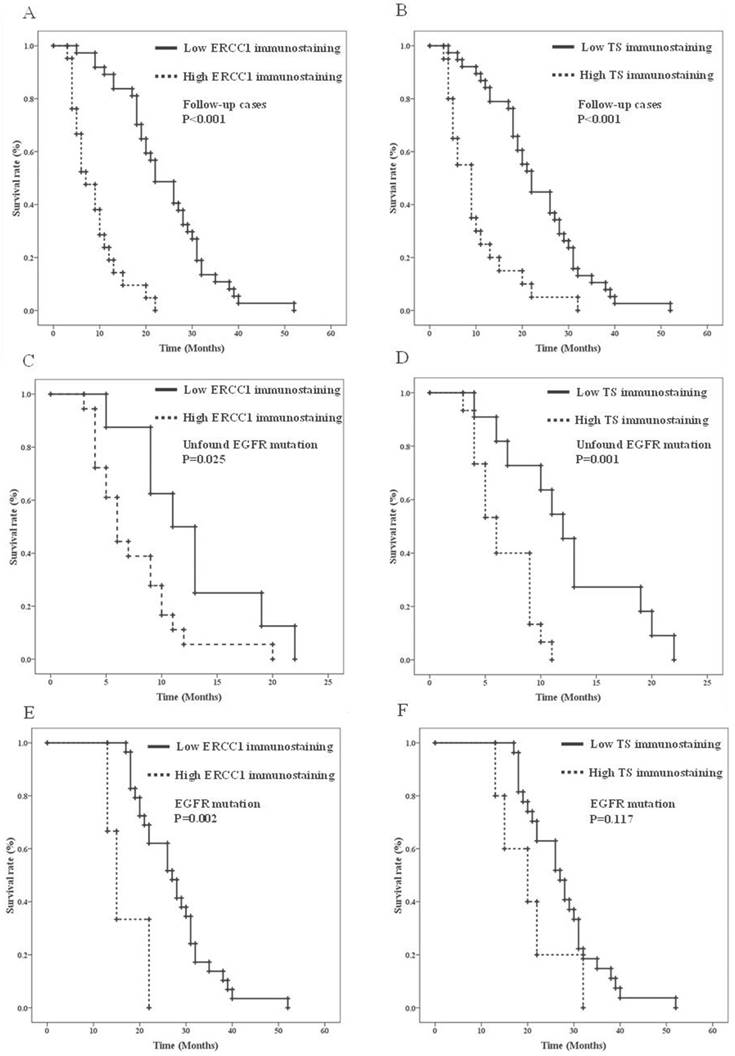 Nevertheless, several of the results merit further discussion. First, TKI therapy (gefitinib or erlotinib) was provided as the first-line treatment for 32 patients with AC-NSCLC and somatic mutations at the EGFR TK domain, such as exon 19 and 21. After TKI therapy failure, pemetrexed- and platinum-based chemotherapies were administered. For the patients with negative EGFR-mutated AC-NSCLC, pemetrexed- and platinum-based chemotherapies were provided as the first-line treatment, and the TKI therapy was administered after chemotherapy failure. Active EGFR mutations have been confirmed as the predictive biomarkers for EGFR-TKI targeted therapy in patients with advanced NSCLC. Additionally, pemetrexed- and platinum-based chemotherapies results in the formation of DNA monoadducts and interstrand crosslinks [31]. The elimination of DNA adducts is mainly dependent on the NER pathway [32]. However, until now, the prognostic value of ERCC1 and TS expression for AC-NSCLC was unclear. Most studies have revealed that ERCC1 expression is correlated with resistance to chemotherapy. In one, adjuvant cisplatin-based therapy achieved prolonged OS in ERCC1-negative tumors but not in ERCC1-positive tumors [33]. Elsewhere, patients with low or median TS and ERCC1 expression had survival benefits after pemetrexed- and platinum-based chemotherapies [34, 35]. Additionally, the DNA repair biomarker, ERCC1, was determined to have a significant predictive value in squamous cell carcinomas [36]. However, the readout ERCC1 IHC data were unreliable to consider ERCC1 as a prognostic marker of NSCLC in another study [37]. He et al. [38] also reports that chemotherapy based on ERCC1 expression did not have significant impact on disease-free survival of patients with NSCLC. TS expression, rather than ERCC1 expression, was found to be the only independent prognostic factor in malignant pleural mesothelioma [39]. Furthermore, TS expression was higher in nonadenocarcinomas (non-AC-NSCLC) than in AC-NSCLC, and high TS expression was a powerful prognostic predictor of poor outcomes in resected AC-NSCLC [30].

In conclusion, despite the small sample size of the present study, our findings indicate that the EGFR mutation status is the main biomarker for treatment outcomes following second-line treatment. Our study suggests that the EGFR mutation status and ERCC1 and TS expression are useful biomarkers for evaluating the OS of patients with positive or negative EGFR-mutated AC-NSCLC. However, this observation is merely a hypothesis at present, and requires further validation.