Although autophagy has been proposed to play an emerging role in diabetic neuropathy, autophagy and its possible role remains unclear. Moreover, only few studies about diabetes have explored the autophagy mediated by heat shock protein beta-8 (HSPB8) and Bcl-2 associated athanogene 3 (BAG3). In the present study, we examined the autophagy induced by high glucose levels in an in vivo rat model of diabetes induced by streptozotocin (STZ) and an in vitro model of retinal ganglion cell-5 (RGC5) cells under high glucose conditions. In the spinal cord tissues of the STZ-induced diabetic rats, the levels of light chain 3 (LC3) and Beclin-1-marked autophagy rose with increasing HSPB8 and BAG3 levels. By confocal immunofluorescence, HSPB8 and LC3 were observed to be co-localized in the spinal cord tissues. In the RGC5 cells, high-glucose stimulation upregulated the expression of LC3-Ⅱ, Beclin-1, and HSPB8 in a dose-dependent manner. When the RGC5 cells were subjected to high-glucose conditions, HSPB8 overexpression, along with upregulated LC3-Ⅱ and Beclin-1 expression, increased the autophagic rate, whereas siRNA-silenced HSPB8 decreased the autophagic rate. Furthermore, in GFP-mRFP-LC3 probe experiments, HSPB8 overexpression promoted autophagosome-lysosome fusion, whereas HSPB8 silencing disrupted this process. In the cells treated with HSPB8 and siRNA, the fusion was impaired, as indicated by the elevated p62 expression. HSPB8 overexpression can partly rescue the blocking of the autophagy flux with chloroquine through the reduction of p62 expression level. Our study demonstrated that HSPB8 is involved in the high glucose-induced autophagy under the in vivo and in vitro conditions and critically participated in the autophagosome-lysosome fusion during the autophagy flux.

Autophagy is emerging as an important pathway in diabetic neuropathy. Hyperglycemia associated with diabetes impairs cellular autophagic pathways by driving the quality control of proteins and cellular organelles. Autophagy undergoes the following two steps: autophagosome formation, autophagosome-lysosome fusion [1]. Autophagy is regulated by a set of conserved genes named as the autophagy-related genes (Atg) [2]. Beclin 1, the first identified mammalian Atg, is an essential autophagy inducer [3]. Beclin 1 forms a regulatory complex with class III phosphatidylinositol-3-kinase which is important in initiating autophagy [4]. Meanwhile, microtubule-associated protein light chain 3 (LC3), which exists on autophagosomes, is a mammalian homolog of yeast Atg 8. Autophagosome formation involves the conversion of LC3-I to the lipidated form LC3-II. This conversion from LC3-I to LC3-II is a common indicator of autophagy [5]. Therefore, LC3 serves as a widely used marker for autophagosomes [6]. The p62 proteins can directly bind to LC3 proteins via a specific sequence motif and can be degraded by autophagy in the lysosomes. If autophagy is inhibited, the p62 proteins will accumulate. Therefore, the increasing of p62 proteins can be used as the marker of autophagy flux inhibition [7].

An emerging role of autophagy in diabetic neuropathy has been recently proposed [8]. However, the role of autophagy in diabetic neuropathy is unclear and extremely complicated. Diabetic rats induced by streptozotocin (STZ) exhibits increased levels of autophagy in their dorsal root ganglia [9]. Notably, a clinical study on young patients with type 1 diabetes mellitus who died from diabetic ketoacidosis and brain edema reported that the pathogenesis of the neuronal deficits was associated with increased macro-autophagy levels [10].

Heat shock proteins (HSPs), also called stress proteins, contain singular conserved structures. HSPs maintain chaperone and kinase activities, and protect against apoptosis and cell impairment [11, 12]. HSPB8, which belongs to a superfamily of small HSPs, functions as a chaperone interacting with Bcl-2 associated athanogene 3 (BAG3) during autophagy [13]. The BAG family of proteins functions as co-chaperones by assisting molecular chaperones to recruit target proteins [14]. The BAG3 protein belongs to the BAG family, which interacts with the ATPase domain of the HSPB8 to regulate autophagy [15]. HSPB8 has been reported to be closely associated with motor neuron diseases, such as Huntington's and Parkinson's diseases and distal hereditary motor neuropathy [16]. HSPB8 is also mutated in clinical diseases, such as hereditary nerve ending disease and Charcot-Marie-Tooth disease [17, 18]. These findings indicate the important role of HSPB8 in neuropathy. Recent studies have reported the involvement of HSPB8 in diabetes. HSPB8 expression levels were decreased in the gastrocnemius muscles of diabetic rats upon fluoride exposure [19]. Therefore, HSPB8 may be involved in the pathogenesis of diabetic neuropathy through the effects on autophagy.

The current study aims to determine the role and mechanism of HSPB8 in autophagy and flux through in vivo and in vitro experiments. We used retinal ganglion cell-5 (RGC5) cells which is a human neuroblastoma cell line in the in vitro experiment.

Male Sprague-Dawley rats (200-250 g) were provided by the Laboratory Animal Center of Ningxia Medical University. Diabetes was induced by intraperitoneal injection of STZ (55 mg/kg body weight) in sodium citrate buffer. Meanwhile, control rats were injected with sodium citrate buffer alone. All the rats were raised for 4 weeks in accordance with the guidelines of the Institutional Animal Care and Use Committee procedures of Ningxia University. The investigation conformed to the United States National Institutes of Health Guide for the Care and Use of Laboratory Animals.

The rats were anesthetized and perfused through the ascending aorta with 0.9% NaCl and 4% paraformaldehyde for 1.5 h. After the perfusion, spinal cords were dissected and fixed in 4% paraformaldehyde for 4 h. Then, sucrose (20%-30%) was used to dehydrate the spinal cords. The dehydrated samples were cut into 8-μm-thick frozen slices (cross-sections) in a microtome-cryostat. The cross-sections were subjected to double immunofluorescent staining. The primary antibodies utilized were as followed: HSPB8 (1:150; mouse monoclonal), LC3B (1:200; rabbit monoclonal), and BAG3 (1:200; rabbit monoclonal). FITC- and TRITC-conjugated secondary antibodies (1:100) were obtained from ZhongshanGoldbridge Biotechnology (Beijing, China). Immunofluorescence was observed through confocal microscopy (Olympus, Tokyo, Japan).

Spinal cord tissues from the diabetic rats were homogenized, lysed, and then mixed with 50 μl of protein A sepharose beads. Next, the mixture was incubated on a rotary mixer for 30 min at 4 °C with pre-clearing lysates. HSPB8 antibody (2 μg) (R&D Systems, Minneapolis, MN, USA) or control immunoglobulin M (ProteinTech Group, Chicago, IL, USA) was used for co-immunoprecipitation. The resulting solutions were incubated at 4 °C overnight. The solutions were then centrifuged, and the resulting beads were washed with TBST containing a protease inhibitor for three to four times. Approximately 80 μl of supernatant was obtained after the last centrifugation. The pellet was resuspended with 20 μl SDS sample buffer, and then heated at 95-100 °C for 5 min. Western blot was subsequently performed using anti-BAG3 (ProteinTech Group ,Chicago, IL, USA) and anti-HSPB8 (R&D Systems, Minneapolis, MN, USA) antibodies.

pcDNA3.1-mRFP-GFP-LC3 plasmids were transfected into the RGC5 cells. The HSPB8-pcDNA3.1 plasmid and the siRNA-HSPB8 were transfected simultaneously. The cells were then fixed in 4% paraformaldehyde for 30 min and observed under a confocal microscope.

All data were presented as means ± standard deviations. Student's t-test was used when two groups were compared, and multivariate ANOVA was used to compare more than two groups. A p value of less than 0.05 was considered statistically significant. The statistical analysis was performed on SPSS 17.0 software (IBM SPSS, Inc., Chicago, IL, USA).

Overall, our data revealed a significant correlation between HSPB8 and Atgs LC3 and Beclin-1.

To confirm whether HSPB8 is involved in the autophagic process, we performed gain-of-function and loss-of-function experiments on the overexpressed HSPB8 and siRNA vectors. We observed that HSPB8 overexpression increased, whereas the siRNA silencing of HSPB8 decreased the Beclin-1 expression levels (Fig. 2A). Notably, BAG3 exhibited the same results as those of Beclin-1. Thus, HSPB8 can promote the autophagy induced by high-glucose stimulation, whereas HSPB8 silencing can at least partly inhibit the autophagic process.

Electron micrograph images showed that typical autolysosomes were present in the cells overexpressing HSPB8 (Fig. 2B). Meanwhile, enlarged lysosomes (indicated by arrows) were observed in the siRNA-HSPB8 cells, suggesting the fusion between the autophagosomes and lysosomes was inhibited. Overall, HSPB8 was a key regulator for the autophagosome-lysosome fusion. The fusion was retarded or blocked without HSPB8.

HSPB8 participated in the autophagosome-lysosome fusion in the RGC5 cells

HSPB8 affected the autophagy flux in the chloroquine-treated RGC5 cells 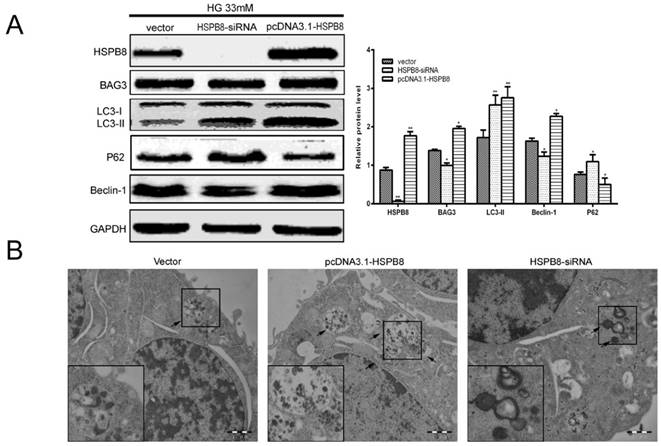 Tandem GFP-mRFP-LC3 probe analysis of the autophagosome-lysosome fusion. Yellow dots represent the unfused autophagosome, whereas red dots denote the fusion, wherein autolysosomes are formed. The RGC5 cells had been transfected with GFP-RFP-LC3 probes for 32 h. In the HSPB8 siRNA treated cells, an elevated number of yellow dots were observed. 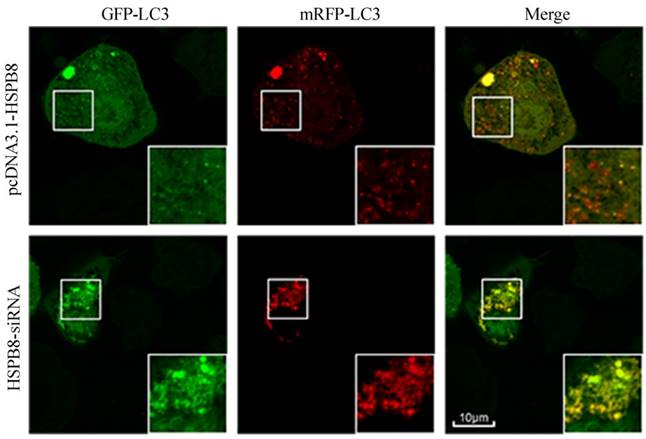 In this current study, autophagy occurred intensively in the spinal cord of STZ-induced diabetic rats. The in vitro studies on the RGC5 cells supported the hypothesis that autophagy responds to high glucose. Persistently high glucose caused imbalances on the cell antioxidant capacity and thus promoted oxidative stress-mediated injury and the accumulation of dysfunctional organelles or aggregated proteins within the cells [21]. Hyperglycemia and high-glucose stimulus may activate autophagy through protein aggregation. Studies in Zucker diabetic fatty rats demonstrated that high blood glucose levels stimulate protein aggregation in the brain. The brains extracted from these rats displayed considerably increased levels of protein aggregation, fibronectin expression, protein glycosylation, and mTOR and S6 ribosomal protein phosphorylation [22].

The autophagy mediated by the HSPB8-BAG3 complex can recognize and bind misfolded proteins. As such, the complex can prevent protein aggregation and distinguish the substrates of renaturation from those of proteasomal degradation. HSPB8 is responsible for recognizing the misfolded proteins, whereas BAG3 recruits and activates the macro-autophagy machinery near the chaperone-loaded substrates [23]. Our data demonstrated that the high glucose-induced upregulation of HSPB8 and BAG3 expression was dose-dependent. Along with the autophagy marker LC3 and Beclin-1, the HSPB8-BAG3 complex levels increased in vitro and in vivo. These data suggest that autophagy occurred in the diabetic spinal cord and was mainly caused by the misfolded protein aggregates. The HSPB8-BAG3-mediated autophagy possibly acted as a protective mechanism in response to the high glucose levels. This result was consistent with those of other studies, where autophagy protected against the stress caused by protein aggregation in other nerve-related diseases, such as amyotrophic lateral sclerosis and Parkinson's disease [24].

Autophagy is a dynamic process that involves three steps: autophagosome formation, autophagosome-lysosome fusion, and degradation. Some studies have established the role of HSPB8 as co-chaperon during autophagy flux, where HSPB8 binds with protein aggregates and promotes pre-autophagosome formation [25]. The results of our gain-or-loss-of-function experiments supported this hypothesis. When HSPB8 was overexpressed, high-glucose-induced autophagy intensified, the LC3 expression levels increased, whereas p62 expression levels decreased. However, when HSPB8 expression was decreased by the siRNA, the autophagy flux was impaired, and p62 levels increased evidently, suggesting blocked autophagosome-lysosome fusion. The increased p62 level could not be cleared immediately by the lysosome. Meanwhile, the confocal images of LC3 showed numerous red dots in the HSPB8-overexpressed cells. Notably, HSPB8 overexpression partly rescued the chloroquine's blocking effect on autophagy. Overall, HSPB8 is necessary during the autophagosome-lysosome fusion step in the autophagy flux.

In conclusion, hyperglycemia can augment autophagy levels and upregulate HSPB8 and BAG3 expression in vivo and in vitro. Moreover, HSPB8 plays a critical role in autophagosome-lysosome fusion. Autophagy is particularly important in protecting against diabetic complications including diabetic neuropathy [21], We hypothesize that increasing autophagy in neuronal cells may help these cells ameliorate the bioenergetic crisis, necrosis, and apoptosis associated with diabetic neuropathy. In our study, HSPB8 enhanced the autophagy flux, which indicates that HSPB8 may have protective effects. This study provided a potential target for therapeutic intervention in diabetic neuropathy, or at the least a mean to impede the progress of diabetic neuropathy.