Effects Of Oral Glutamine on Inflammatory and Autophagy Responses in Cancer Patients Treated With Abdominal Radiotherapy: A Pilot Randomized Trial

Background and Aims: Abdominal radiotherapy (RT) causes harm to the mid gastrointestinal mucosa by release of pro-inflammatory cytokines and promotes autophagic changes in tumor cells. This study was aimed to measure the effect of glutamine administration on markers of inflammation and autophagy in cancer patients treated with RT.

Methods: In this double-blind, randomized, controlled pilot trial 43 patients under abdominal RT diagnosed of pelvic or abdominal malignancies receiving glutamine (30 g/d) or placebo (casein, 30 g/d). Patient recruitment took place in the Complejo Asistencial Universitario of León (CAULE), Spain. Patient evaluation took place at three different time points during the study: before RT (pre-treatment), in the middle of the RT period (mid-treatment), and after finishing RT (post-treatment). Data were compared by analysis of variance and the Newmann Keuls test. Significance was accepted at p < 0.05.

Conclusions Findings provide evidence that glutamine decreases the inflammatory response and abolishes the changes of the autophagy machinery in patients receiving abdominal RT. The protective effect of glutamine must continue being investigated to disclose further molecular pathways.

Inflammatory effects significantly contribute to the disorders associated with abdominal radiotherapy (RT) for malignant diseases. Different studies have shown that after the administration of RT, inflammatory cytokines including IL-1β, TNF-α, and IL-6, are released from the epithelium and the adjacent connective tissue [1], playing a key role in the development of RT-induced gastrointestinal mucositis [2]. Many inflammatory responses, particularly in the gut, are mediated by the activation of transcription factors nuclear factor kappa B (NF-κB) and activator protein 1 (AP-1) [1]. NF-κB is a key factor in the inducible expression of many pro-inflammatory genes, which is known to be activated by RT and may play a role in the development of radioresistance [3].

Autophagy is an evolutionary conserved response to metabolic stress that recycles cellular proteins and organelles [4] and has a controversial role in relation to stress induced by radiation in tumor cells. Up-regulation of autophagic genes induced by radiation has been considered a cytotoxic mechanism which contributes to cancer cell death [5]. However, it is known that autophagy inhibition increases cancer cell sensitivity to chemotherapy or radiation [6], and it has been reported that the combination of autophagy inhibition with radiation therapy would enhance the efficiency of anti-tumor treatment [7].

Glutamine is ubiquitous, being the main source of amino acids for the intestinal mucosa. Glutamine is largely metabolized by enterocytes and immunocytes [8]. This amino acid has been used in many clinical conditions with high nitrogen losses, trauma, burns, prolonged fasting, chemotherapy, etc. [9]. Glutamine may be beneficial in RT-treated patients. A retrospective research has reported its efficacy in the prevention of acute radiation induced esophagitis [10]. In patients with enteritis due to abdominal and pelvic RT, a previous study has observed lower rates of acute and chronic diarrhea [11], while in a more recent randomized clinical trial no apparent beneficial effects were reported in terms of stool frequency [12]. It is also known that patients with esophageal cancer receiving a combination of omega-3 fatty acids, glutamine, and arginine show reduced levels of inflammatory cytokines [13].

This double blind, placebo controlled pilot study was aimed to investigate whether the use of glutamine prevented the inflammatory response and the autophagic process in cancer patients treated with abdominal radiotherapy.

The glutamine group received 30 g/d of oral glutamine (Glutamina NM; Nutrición Médica, Madrid, Spain). This dose of glutamine was selected following previous studies [12, 14]. The placebo group was given 30 g/d of pure whole casein (Proteína NM; Nutrición Médica). Both glutamine and placebo were administered in nonlabeled sachets containing 10 g of product. 3 sachets/d, were prescribed from 3 days before starting abdominal RT until the end of treatment. Each sachet was dissolved in 200 mL of water and administered postprandially. Glutamine and placebo were identical in taste, texture and color before and after dissolution. The level of compliance was evaluated by counting the empty sachets retrieved from patients.

The study followed the Declaration of Helsinki, was evaluated by the Research Ethics Committee of the Complejo Asistencial Universitario of León (CAULE) (March 29, 2011; reference number 1128), and was registered with Clinical Trials (ref. no. NCT00828399). All patients received verbal and written information about the purpose and methodology of the research and were included after signing the informed consent document.

Results were expressed as mean values and SEM. Data were compared by analysis of variance and the Newmann Keuls test. Significance was accepted at p < 0.05. Values were analyzed using SPSS version 19.0 (IBM Corp, Armonk, NY, USA).

Final analysis was carried out in forty three patients out of the patients included for the pilot trial. Eleven patients dropped out (five glutamine, six placebo). The two groups did not significantly differ in terms of patient characteristics (Table 2). No glutamine related toxicity was reported by any patient included in the study. No difference in body weight change was observed among glutamine and placebo groups. 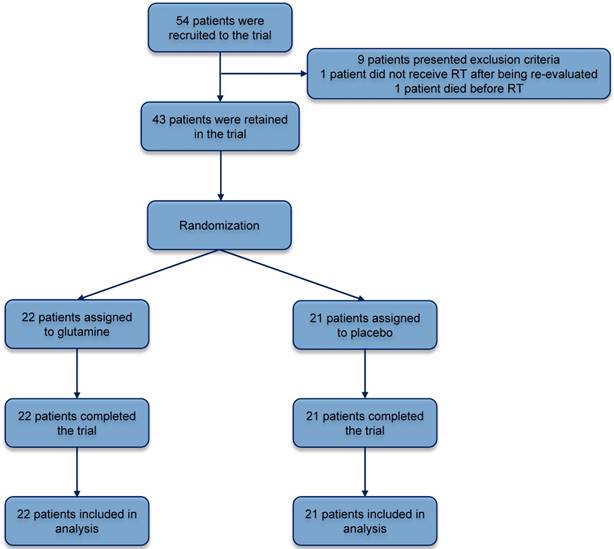 Results from the patients in the placebo group showed that abdominal RT enhanced the expression of the transcription factors NF-κB (p50 and p65) and AP1 in the mid-treatment period, with values returning to normal after treatment (Figure 2). Moreover, mRNA levels were significantly lower in the glutamine group compared with placebo during mid-treatment. 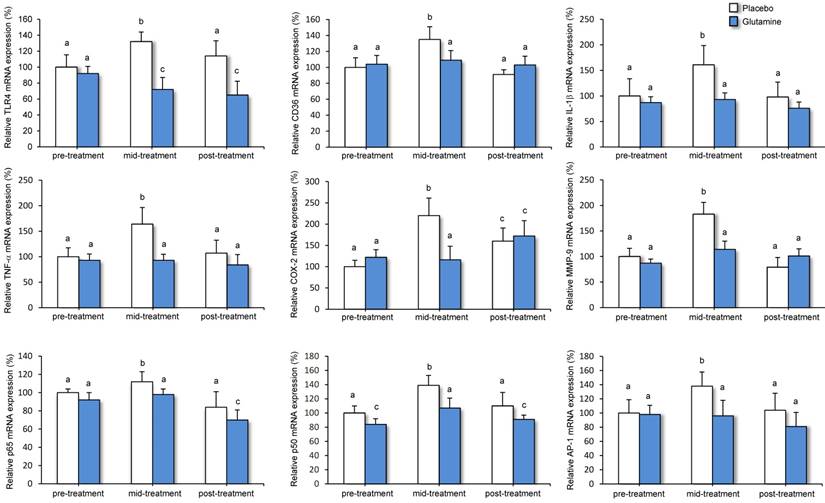 Effects of abdominal RT and glutamine on markers of autophagic response

Finally, mRNA expression of different markers of autophagy was measured in whole blood from both placebo and glutamine groups (Figure 3). In the placebo group transcript levels of beclin-1, UVRAG, Atg5, LC3-II, p62 and LAMP-1 were significantly higher in the mid-treatment period compared with the period prior to treatment. Following abdominal RT mRNA levels of beclin-1, UVRAG, Atg5 and LC3-II have returned to pre-treatment levels. When patients were given glutamine, the different autophagy genes showed lower transcript levels compared with the placebo group during the mid-treatment period. P62 and LAMP-1 expression was also significantly lower in glutamine groups compared with placebo group following abdominal RT.

When glutamine falls markedly over time in patients with cancer, glutamine-dependent organs and tissues may be impaired. The extent of radiation damage may be partially prevented in presence of normal glutamine stores. Recent reports indicate that glutamine supplementation minimizes radiation induced dermatitis in breast cancer [16], and decreases the severity of mucositis or esophagitis induced by chemo-radiotherapy in cancer patients with head and neck cancer [8, 17]. Glutamine is essential to maintain a normal gut under radiation. An early inflammatory phase may induce the pathologic progression of radiation toxicity in many tissues. For this reason, a first objective of the present study was to assess the efficacy of oral glutamine in the prevention of radiation-induced inflammation in patients with abdominal cancer. 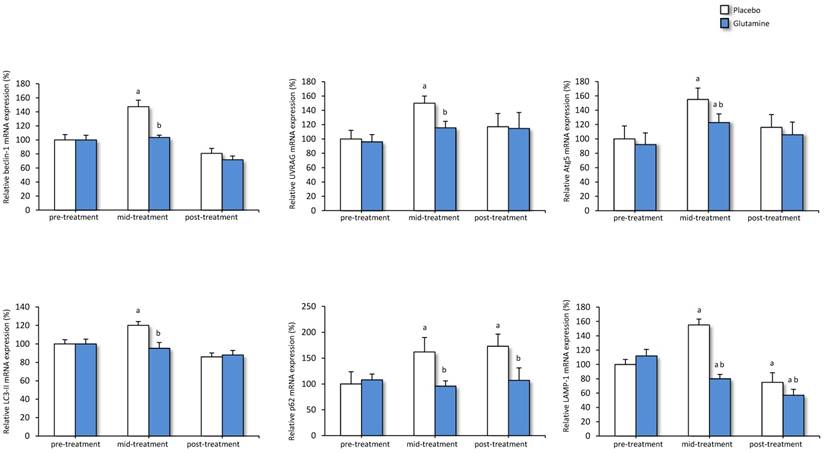 NF-κB and AP-1 are transcription factors which play critical roles in the generation of cytokines and other molecules involved in the inflammatory response. Activation of NF-κB pathway by irradiation is known to stimulate inflammatory cytokine expression, whereas activation of AP-1 pathway promotes MMP production [21]. Elevated levels of pro-inflammatory cytokines following RT correlate with histological evidence of intestinal mucositis and peak expression of NF-κB [22], while antioxidants inhibit irradiation-induced inflammatory cytokine and MMP production by suppressing the NF-κB and AP-1 signaling [23]. Moreover, it is known that activation of the TLR4/NF-κB signaling pathway may contribute to radiation resistance, while sensitivity is boosted by the combination of radiotherapy with NF-κB activity-inhibiting drugs [24]. In our study, activation of both AP-1 and NF-κB resulting from abdominal RT was significantly abolished by glutamine administration, in parallel to TLR4, CD36, MMP-9, and cytokine down-regulation. Taken together data obtained indicate that the application of glutamine could be useful for the weakening of inflammation associated to abdominal RT in cancer patients.

Autophagy is a dynamic pathway responsible for the degradation of organelles and proteins which affects cell metabolism in two opposite ways: either protecting the cell or killing it [4]. Many anticancer agents, tamoxifen, arsenic trioxide, rapamycin, temozolomide, histone deacetylase inhibitors, radiation, vitamin D analogues, and etoposide have been reported to induce autophagy. However, it is highly controversial whether autophagy has a positive effect in cancer therapy [25]. Autophagy acts in two ways in tumor cells. It may act as a tumor suppressor mechanism, promoting cancer cell proliferation and tumorigenesis, but it may also favor cell survival under oxygen/nutrient deprivation or in response to deleterious effects by chemotherapeutic drugs or ionizing radiation [26].

The role of autophagy in the resistance of cancer cells to RT is still controversial. Nevertheless, it has been shown that pharmacological and/or genetic inhibition of autophagy favors the lethal effects of tumor cells in several therapeutic circumstances. This suggests that intervention in the autophagic pathway may be an alternative in cancer treatment [27]. Inhibition of autophagy has been recently shown to significantly increase both in vitro and in vivo the radiosensitivity of esophageal squamous cell carcinoma [28]. In this context, new autophagy inhibitors that are anticipated to have superior pharmacokinetic properties as well as clinical efficacy are currently under development [29].

Although with the limitation of being a pilot study, this is the first human research to examine the impact of the use of glutamine on autophagy in cancer patients treated with RT. The autophagosome is a double-membrane-bound vacuole which engulfs fractions of the cytoplasm through different autophagy adaptors, such as p62/SQSTM1. This mechanism results in the autophagic degradation of ubiquitinated protein aggregates in lysosomes. The first step in the autophagic process, the nucleation of the autophagosomal membrane, is under the control of a molecular complex containing beclin-1. Several interacting proteins participating in this complex include positive factors such as UVRAG. The elongation step requires two distinct ubiquitin-like conjugation systems. The first system involves conjugation of Atg12 to Atg5. In the second conjugation system LC3-I conjugates with phosphatidylethanolamine to LC3-II, which localizes to the autophagosomal membrane [4]. Data from the present study indicate that RT coursed with an increase in beclin-1 mRNA levels in parallel to changes in both ubiquitine systems (Atg and LC3-II). This effect was associated with an increased expression of UVRAG, which interacts with beclin-1 in the early steps. Autophagosome maturation would subsequently activate autophagy.

These results should be analyzed with caution. LC3 protein may accumulate as a result of either higher autophagic flux by increased formation and processing of autophagosomes or blocking of autophagy caused by an absence of autophagolysosomal processing [30]. In the present research the lysosomal marker LAMP-1 was also increased by abdominal RT, which suggests reduced lysosomal consumption. In addition, the higher expression of p62/SQSTM1 could be associated to deceleration of recycling of the major carrier of material to autophagosomes and a lower autophagic degradation of ubiquitinated protein aggregates in lysosomes [31]. In any case, all the described effects of abdominal RT on the different autophagy markers were significantly abrogated by glutamine. These open the possibility to further studies aimed to investigate whether glutamine actions on autophagy induced by radiation can be of therapeutic benefit.

In summary, the present results shed new light into the role of glutamine in human, indicating that it decreases the expression of inflammatory mediators during abdominal RT-induced healing response and abolishes autophagic changes associated with RT. Identification of glutamine actions may contribute to a better understanding of its use in cancer patients.