Psoriasis is a common inflammatory skin disease characterized by abnormal keratinocyte inflammation and differentiation that has a major impact on patients' quality of life. IL-36γ, a member of IL-36 cytokine family, is highly expressed in psoriasis and plays an important role in inflammation response and differentiation. However, the function of IL-36γ in differentiation and inflammation of keratinocyte in psoriasis has not been clearly identified. Thus, this study aimed to investigate the role of IL-36γ on differentiation and inflammation in HaCaT cells. HaCaT cells were divided into three groups: (1) Control group; (2) IL-36γ (100 ng/mL) group; (3) IL-36γ (100 ng/mL) + IWP-2 (1μM) group. Real time PCR was used to detect gene expression; the inflammation cytokines were examined by ELISA. We showed that treatment of HaCaT cells with IL-36γ significantly upregulated the expression levels of β-catenin, cyclin D1, and ki-67. IL-36γ also promoted the production of the inflammatory cytokines IFN-γ, IL-1β and IL-6, suppressed the expression of filaggrin, involucrin, keratin 1 and keratin 5. Meanwhile, we demonstrated the role of IWP-2, an inhibitor of the Wnt signaling pathway, in IL-36γ-treated HaCaT cells. Collectively, our findings suggest that IL-36γ inhibits differentiation and induces inflammation of keratinocyte via Wnt signaling pathway in psoriasis, this indicated that downregulation of IL-36γ may be a potential therapeutic option in psoriasis.

Psoriasis is a common, chronic skin disease, affecting approximately 2%-3% of the population[1]. The disease is usually characterised with raised, well-demarcated, erythematous plaques with adherent silvery scales[2]. The scales are a result of hyperproliferation and aberrant differentiation of keratinocytes and infiltration of inflammatory cells, such as dendritic cells, macrophages, and T cells in the dermis and neutrophils, with some T cells in the epidermis[3,4]. The inflammatory infiltrate indicates that cytokines plays an important role in the pathogenesis of psoriasis, and interesting therapeutic targets could be identified, such as drugs targeting TNF-α, IL-17, IL-22, IL-23 and GM-CSF[1,5]. However, the exact mechanisms regulating these abnormal differentiation and immunological dysfunction remain largely unknown.

The IL-36s are primarily expressed by keratinocytes in a restricted manner. IL-36 expression in keratinocytes can be enhanced by IL-1α, TNF-α, and IL-17[9,10]. Furthermore, IL-36 was able to induce its own expression and various pro-inflammatory cytokines as well as augmented IL-17-mediated production of antibacterial peptides. In addition, IL-36 cytokines also have synergistic effects on the induction of antimicrobial peptides by IL-17A or TNFα. These all indicate that other pro-inflammatory cytokines and IL-36 can reinforce each other and cause similar responses in keratinocytes[11]. Especially, IL-36γ appears to have a central amplifying position in pro-inflammatory pathways at the interface between innate and adaptive immunity. Increased levels of IL-36 cytokines were observed in lesions of human psoriatic skin and confirmed in mouse models of psoriasis-like diseases. IL-36γ is highly expressed and specific for psoriatic inflammation but only weakly expressed in other inflammatory skin diseases, such as atopic dermatitis, lichen planus and eczematous diseases[9,11]. These features highlight IL-36γ may be a valuable future biomarker in psoriasis patients, however, the exact mechanisms responsible for the effect of IL-36γ on keratinocyte are still unclear.

The Wnt signaling pathway plays a vital role in a variety of biological activities, such as cell proliferation, cell-fate determination, and differentiation during adult homeostasis[12]. Previous studies have demonstrated membranous β-catenin expression was significantly decreased in the control group in comparison to the lesions of active psoriasis. Nuclear β-catenin expression was significantly increased in lesions of psoriasis in comparison to the control cases[13]. These suggest that β-catenin may play an important role in keratinocyte differentiation.

Conditioned media collected from treated cells and untreated cells were centrifuged to remove cell debris, and the supernatants were collected. The IFN-γ, IL-1β and IL-6 concentrations in the supernatants were measured using ELISA kits (NeoBioScience Technology Company, Shenzhen, China). The optical density was measured with Thermo Scientific Varioskan Flash (Thermo Fisher Scientific, Waltham, MA, USA) at 450nm wavelength. The protein concentration was determined by comparing the relative absorbance of the samples with the standards.

Exposure to IL-36γ for 24 h and 48 h resulted in increase of β-catenin. Treatment with Wnt signaling pathway inhibitor IWP-2 blunted the increase expression of β-catenin (Fig.4). 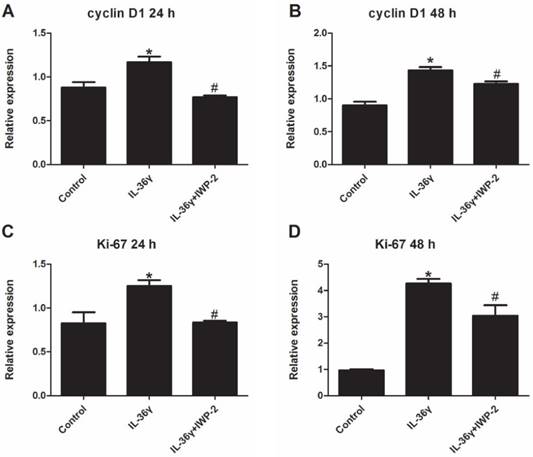 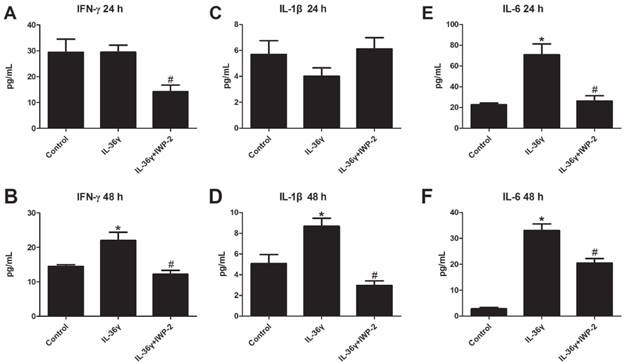 In recent years, major issues in elucidating the molecular mechanisms of psoriasis remain unresolved, including the autoimmune cause of the inflammatory process, the relevance of cutaneous versus systemic factors, and the role of genetic and environmental influences on the pathogenesis of the disease[14]. Previous studies have demonstrated that expression of IL-36γ is upregulated in colonic epithelial cells from patients with inflammatory bowel disease (IBD) [15,16], whereas in the lung, IL-36γ expression is strongly induced in various models of asthma can be produced by bronchial epithelium exposed to viral infection, smoke or inflammatory cytokines[17,18]. In the present study, we also found that a single exposure to IL-36γ impaired the normal function of HaCaT keratinocyte, suggesting that IL-36γ may play a role in the development of psoriasis skin lesion.

Skin inflammation that seen in psoriasis results from the multipartite interactions of, at least, KC, T cells, antigen presenting cells (APC), fibroblasts and endothelial cells. The hypothesis that a cytokine network in psoriasis proposed a central role of pro-inflammatory cytokines has been validated by the clinical success of anti-TNF and anti-IL-17A therapy in the treatment of psoriasis[23]. In psoriasis, the keratinocyte actively participates in a multicellular, multimolecular network coordinated by cytokines. Psoriatic keratinocytes are a rich source of antimicrobial peptides, including LL-37, β-defensins, and S100A7 (psoriasin), which show the effects of chemotaxis and shape immune-cell function[24,25]. They can response to dendritic cell and T-cell-derived cytokines, including interferons, TNF, interleukin-17, and so on. In turn, keratinocytes will produce pro-inflammatory cytokines (interleukin-1, interleukin-6, interleukin-8, TNF-α and so on)[1,11,26]. Many of the inflammatory mediators induced by IL-36 have been demonstrated to be over-expressed in psoriatic skin lesions and their continued action appears important in maintaining the lesional phenotype suggesting that IL-36 may contribute to the chemokine environment of inflamed skin[27]. Previous studies have suggested that increased expression of IL-36γ cytokines in in human psoriatic lesional skin as well as psoriasis-like mouse skin lesions[9]. However, there is little knowledge about the function of IL-36γ in the inflammatory response of keratinocytes in psoriasis. In our study, we found that treated HaCaT cells with IL-36γ can mimic the inflammatory process in psoriasis and found that IWP-2 suppressed the production of the inflammatory factors IL-1β, IL-6 and IFN-γ, implying a pro-inflammatory role of IL-36γ in HaCaT cells.

Wnt signaling pathway has an important role in embryonic development and homeostatic self-renewal in adult tissues, besides it exerts both anti-inflammatory and pro-inflammatory functions depending on the conditions and regulated through different mechanisms[12]. The β-catenin is the key regulatory factor in the Wnt signaling pathway activation. Previous studies have suggested that IL-22 promote bony proliferation in the paws of this experimental mouse model of spondyloarthropathy via Wnt signaling pathway [28,29]. In another report, the authors revealed that the β-catenin expression in synovium sample from patients with RA was significantly higher than that of trauma samples[30]. In a study focus on the role of β-catenin in the inhibition of epithelization and wound healing, did not find any nuclear β-catenin in normal epidermis. Decreased membrane staining and increased cytoplasm/nuclear β-catenin staining in the lesions of patients with active psoriasis have been reported[13]. The downregulation of membranous β-catenin in lesional psoriatic skin might be used as phenotypic marker of hyperprolifration of keratinocytes in psoriasis[13,31]. Thus, to improve the related mechanisms that involved in IL-36γ-regulated differentiation and inflammation, the Wnt signaling pathway is explored in the present study, we found that Wnt signaling pathway is a crucial pathway in IL-36γ-regulated differentiation and inflammation of HaCaT cells, suggesting that IL-36γ may play a critical role in suppressing the differentiation and encouraging inflammatory response by association with Wnt signaling pathway. However, additional studies are necessary to understand more clearly the role of IL-36γ in keratinocyte of psoriasis.

Overall, the present study showed that in HaCaT cells, IL-36γ can suppress the differentiation and promote the inflammatory response by the Wnt signaling pathway. These findings suggest that IL-36γ may represent potential targets for the treatment of psoriasis.

The present study was supported by grants from Capital Health Development Research Fund of China (2016-2-4018).

5. Gudjonsson JE, Johnston A, Ellis CN. Novel systemic drugs under investigation for the treatment of psoriasis. J Am Acad Dermatol. 2012;67:139-147