Hypoxia is an important factor in tumor angiogenesis, metastasis, and resistance to chemotherapy or radiotherapy, and may be an indicator of poor prognosis. The transcription factor hypoxia-inducible factor 1 (HIF-1) is the key regulator of the hypoxic state. This study was designed to evaluate the prognostic value of HIF-1α expression in small cell lung cancer (SCLC). Forty-three paraffin-embedded biopsy materials were examined using immunohistochemistry. Our results indicated that the expression of HIF-1α was high in males, and patients with poor Eastern Cooperative Oncology Group (ECOG) performance status and metastases. To elucidate the prognostic value of HIF-1α expression, Kaplan-Meier analysis was carried out and the results showed that patients with high HIF-1α expression had a poorer prognosis than patients with low expression of HIF-1α. After adjusting clinical parameters by the Cox proportional hazards model, our results demonstrated that high HIF-1α expression is an independent prognostic factor for SCLC with a 39.2-fold risk of death (p<0.003). In conclusion, we have provided evidence that HIF-1α expression has significant value in predicting survival of patients with SCLC and is an independent prognostic factor beyond ECOG performance and metastasis status.

Lung cancer is the leading cause of cancer-related death worldwide. Human lung cancers are classified into small cell lung cancer (SCLC) and non-small cell lung cancer (NSCLC) groups, the latter consisting of adenocarcinoma, squamous cell carcinoma, bronchioalveolar carcinoma, and large-cell carcinoma. Despite advances in lung cancer therapy, the average 5-year survival rate is only 18% [1]. Between 15% and 25% of all lung cancer cases are classified histologically as SCLC, which is characterized by rapid growth and a high metastatic potential [2]. The natural history of SCLC reveals earlier dissemination and higher mortality than that of NSCLC. In general, SCLC is considered to be a systemic disease, even if SCLC appears to be confined to the chest at the time of diagnosis. Patients with SCLC have decreased longevity and are rarely cured with the currently available therapies.

According to the two-stage system of the Veterans Administration Lung Cancer Group (VALG), SCLC is classified as extensive (ED-SCLC) and limited disease (LD-SCLC). The pre-treatment prognostic factors that consistently predict prolonged survival include good performance status, female gender, and LD-SCLC. The median survival for untreated LD-SCLC and ED-SCLC patients is 4-6 months and 5-9 weeks, respectively. Of note, the survival of SCLC patients could be improved significantly with effective therapy [3].

Hypoxia is a critical factor that impacts cell proliferation, survival, angiogenesis, immunosurveillance, metabolism, tumor invasion, and metastasis, and is associated with a worse prognosis for cancer patients [4-7]. Transcription factor hypoxia-inducible factor 1 (HIF-1) is the key regulator responsible for the induction of genes that facilitate adaptation and survival of cells, and the entireorganism, from normoxia (~21% O2) to hypoxia (~1% O2) [8, 9]. There are two main characteristics of solid tumors (neovascularization and increased glycolysis), which represent adaptations to a hypoxic microenvironment and are correlated with tumor invasion, metastasis, and lethality. HIF-1α overexpression has been previously reported to be associated with a poor prognosis in breast, oropharyngeal, and cervical cancers [10-13]. Moreover, the correlation between the presentation of HIF-1α and the prognosis of NSCLC has been analyzed [14-16]. Specifically, Giatromanolaki showed that HIF-1α is associated with VEGF expression, but is not significantly correlated with NSCLC prognosis [14], and Swinson had revealed that HIF-1α expression is associated with a poor prognosis [15]. Moreover, a systematic review also reports that HIF-1α might serve as important factors in evaluating prognosis of lung cancer [16]. There are no data, however, showing an association between HIF-1α expression and SCLC prognosis. In the current study, we examined HIF-1α protein expression in 43 SCLC specimens using immunohistochemistry and evaluated the role of HIF-1α in influencing the prognosis of SCLC.

The original biopsy materials were obtained from bronchoscopic or computer tomography-guided needle specimens. Archival paraffin-embedded biopsy materials from 43 SCLC (all patients received at least 2 courses of chemotherapy with cisplatin [25 mg/m2/day] and etoposide [100 mg/m2/day] for 3 days monthly) were retrieved and 4-μm tissue sections were cut on slides. Histologic diagnoses were made using hematoxylin and eosin (H&E) staining. The Institutional Review Board of Show Chwan Memorial Hospital approved the study proposal (IRB No. 1000909).

Slide sections were dewaxed with xylene and rehydrated through a gradient concentration of alcohol. After the sections were microwaved, the primary monoclonal HIF-1α antibody (SC-53546, dilution 1:50; Santa Cruz Biotechnology, Inc., Santa Cruz, CA, USA) was applied as described previously [17]. The secondary antibody was applied at room temperature for 15 min after twice-washing in water and Tris buffer for 5 min. Then, the slide was washed again using the abovementioned procedures. The slides were then incubated with avidin-HRP for 30 min and washed again. The color was developed with 3, 3'-diaminobenzidine solution (DAB) for 5 min. Gill's hematoxylin was used for counterstaining and the staining time was < 1 min. The stained slide was immersed in 95% alcohol, then in absolute alcohol for 5 min. Negative controls were not exposed to primary antibody. The stained slides were cover-slipped and observed under light microscopy at an optical power of × 40.

Forty-three SCLC patients were included in this retrospective study (Table 1). The median age of the patients was 70 ± 9.82 years (range, 47-87 years), and male patients were predominant (95.3%). Of the patients, 93% were smokers or ever-smokers. The Eastern Cooperative Oncology Group (ECOG) performance status score of all patients was ≤ 3. As expected, a high distant metastases rate was common at the time of diagnosis of SCLC (83.7%). 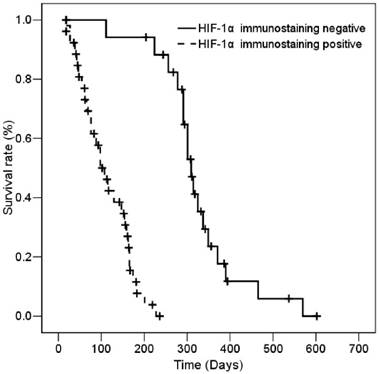 This study was supported by the grant from Chang Shan Medical University and Hospital (CSH-2011-C014).

The authors have declared that no competing interests exist.