Methods: Medical records of 135 subjects with neck pain (CR, n = 67; without CR, n = 68) who had undergone cervical spine magnetic resonance imaging and been referred to the pain clinic between September 2014 and August 2015 were reviewed. Both the Spurling test and NTT were performed in all patients by expert examiners. Sensitivity, specificity, and accuracy were compared for both the Spurling test and the NTT.

Conclusions: The NTT is more sensitive with superior diagnostic accuracy for CR diagnosed by magnetic resonance imaging than the Spurling test.

Cervical radiculopathy (CR) is defined as pain in a radicular pattern in one or both upper extremities related to compression and/or irritation of one or more cervical nerve roots [1] and is commonly caused by posterolateral herniation of a cervical disc, degeneration of a disc causing decreased height of the neural foramen, and cervical spondylosis. When pain radiates in the arm and is associated with sensory and motor disturbances, CR is suspected [2]. CR is a common diagnosis, with an age-adjusted incidence of 83 cases per 100,000 persons [3].

When patients with neck or arm pain visit a pain clinic, physical examinations are performed to screen CR before spine MRI or CT because MRI is expensive and CT scan has radiation hazard. A number of provocative tests and signs described in the literature can be used as a screening test of CR [4] before using spine MRI or CT, and the Spurling test is one of them (Figure 1). However, despite its high specificity (92%-100%), its sensitivity is only low to moderate (30%-60%), depending on the study [5, 6-10]. We hypothesized that the low to moderate sensitivity was because the compressive force used to exacerbate the encroachment of the exiting nerve roots was only applied at a single direction (Figure 2) [6]. Thus, we designed a new physical examination that would apply compressive force at all angles by rotating the neck in a 180° tornadic pattern while pressure is applied, the neck tornado test (NTT) (also denominated as “Choi's test” after the name of the originator, Dr. Jong Bum Choi) (Figure 3 and 4).

The Spurling test. Neck extension and lateral bending were performed.

The force to exacerbate the encroachment of the exiting nerve roots was only applied at a single direction. The Spurling test was negative in (A) and (C) and positive in (B).

This research introduced the cervical spine examination, the NTT. To evaluate the usefulness of the NTT, its sensitivity, specificity, PPV, NPV, and accuracy were compared with those of the Spurling test. This retrospective study was approved by the Institutional Review Board and the ethics committee of our hospital (Approval No. 3-2015-0260).

Force is applied at all angles by rotating the neck in a 180° tornadic pattern. 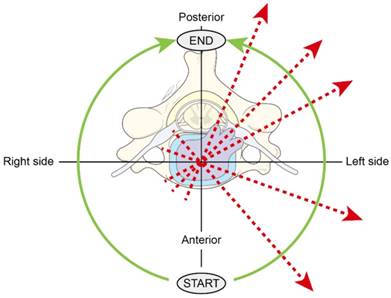 Medical records of 135 subjects with neck pain who had undergone cervical spine MRI and been referred to the pain clinic of our hospital between September 2014 and August 2015 were reviewed. Demographic data are given in Table 1. CR was defined as the expression of typical symptoms of CR such as arm pain, neck pain, scapular or periscapular pain, paresthesia, numbness, sensory change, weakness, or sign of abnormal deep tendon reflex in the arm, with cervical disc herniation or other lesions that decrease the dimensions of the foramen on MRI studies [5]. CR was confirmed by a pain clinician with a 10-year experience by considering the MRI findings and CR symptoms after the Spurling test and the NTT. Patients with neck pain who had undergone cervical spine MRI were included in the study. The exclusion criteria were pregnancy and/or history of cervical spine surgery, inflammatory disease such as rheumatoid arthritis, or previous nerve block for CR.

Physical examinations were performed on all patients. One examiner examined the consecutive 135 subjects. The Spurling test was performed during history taking and examination, 10 minutes before the NTT, and was initiated by neck extension, rotation, and downward pressure on the head [11].

The NTT was performed in the same position, with the patient seated and the same examiner standing behind the patient, as in the Spurling test. Light vertical pressure is applied by the examiner's one hand on the patient's vertex while the neck is relaxed. The body of patient is fixed by the other hand and cannot be influenced by the NTT. During the NTT, light vertical pressure is applied to the cervical spine continuously. Rotation of the neck is initiated, with the patient's neck flexed maximally from the vertical axis. The neck is rotated toward the direction of the pain site, progressing to full lateral bending and full extension of 180°, in a tornadic pattern (Figure 3). The results of both the Spurling test and the NTT were scored as either positive or negative, with reproduced or aggravated radicular pain or tingling in the ipsilateral shoulder or upper extremity indicating a positive sign [7]. Reproduced or aggravated signs in the contralateral side of the physical examination were ignored and recorded as negative.

The Results of Spurling test

The Results of NTT

The ROC curves were generated and used to compare these two tests (Figure 5).

Comparison of the results of the Spurling test and the NTT. 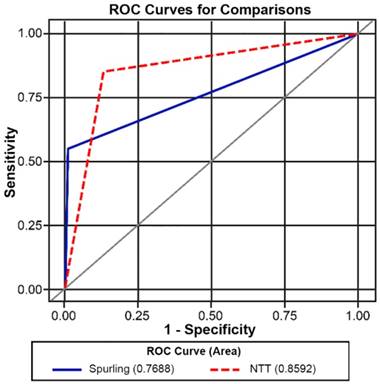 While CR remains largely a clinical diagnosis, diagnostic imaging (myelogram, CT, or MRI) and electrophysiological studies (electromyography and nerve conduction studies) are commonly used to diagnose CR. Although these are considered the most accurate means of diagnosis available, each modality has inherent weaknesses: low cost/benefit ratio, discomfort, and often-lengthy waiting lists, with insufficient evidence to make a recommendation for or against the use of each diagnostic test [5, 12-15]. Asymptomatic radiological abnormalities are commonly seen in MRI, myelography, and CT of the cervical spine [16, 17]. The false-positive rate of imaging studies generally increases with advancing age and ranges from 20% to 50% [16, 18-20]. The evidence is insufficient to make a recommendation for or against the use of electromyography in patients in whom the diagnosis of CR is unclear after clinical examination and MRI [12, 21]. Therefore, a combination of clinical and radiological examinations should form the basis for the diagnosis of a significant root compression.

The Spurling test is designed to exacerbate the encroachment of exiting nerve roots by decreasing the dimensions of the foramen at a certain axis where compressive force is applied [6]. We speculated that this was the reason why the Spurling test yielded only low to moderate sensitivity (Figure 1 and 2) and designed a new physical examination that would supplement the weaknesses by applying compressive force while rotating the neck in a 180° tornadic pattern (Figure 3). Because it is nearly impossible to pinpoint the exact location of the encroached exiting nerve root with the axis where compressive force should be applied to maximize the decrease in the dimension of the foramen, applying force at all angles appears to be a reasonable and an uncomplicated approach (Figure 4). Thus, the NTT is thought to be a simple and effective screening test in CR.

This study was limited by several factors. First, the patients were enrolled from just only one university hospital. The data may not be as accurate in a primary care clinic or other clinical settings. Second, different studies have used different criterion standards to diagnose CR, and the diagnostic accuracy may vary accordingly. Tong et al. [9], using electrodiagnostic studies as a criterion standard in 224 patients, reported a sensitivity of 30% and specificity of 93% for the Spurling test. Uchihara et al. [22], using spinal cord deformity on MRI as the criterion standard in 65 patients, reported a sensitivity of <28% and a specificity of 100% for the Spurling test. Our study used cervical disc herniation or other lesions that decrease the dimension of the foramen on MRI or CT as a criterion standard. When different criterion standards are used, the diagnostic accuracy of the NTT may subsequently be different from our results. Third, observer blinding was not applied when Spurling and NTT test were performed, i.e., the examiner knew the result of the Spurting test before the NTT test was undertaken. Fourth, reproducibility or interrater/intrarater reliability were not examined in this study due to retrospective research. Further study will be needed to increase interrater/intrarater reliability. Lastly, the NTT should be compared with various compression tests used to examine the cervical spine in CR, such as the Spurling test, as originally described by Spurling and Scoville [23], Jackson's neck compression test, in which the neck is flexed laterally then compressed [24, 25], and the neck compression test, in which the neck is only rotated then compressed [25]. Some clinicians also advocate that axial pressure should not be applied to the spine because this may be provocative and can exacerbate CR if present [9].

With the above limitations acknowledged, these data can serve as a rough guide on interpreting the Spurling test and the NTT in the clinical setting. The NTT is not as specific as the Spurling test, but it is a sensitive test with superior diagnostic accuracy for CR diagnosed by MRI. Therefore, the NTT can be useful clinically as a screening test and can help confirm CR along with the Spurling test.

This retrospective study was approved by the Institutional Review Board and the ethics committee of Gangnam Severance Hospital, Seoul, Korea (Approval No. 3-2015-0260).

Consent was not required since the study was based on medical records of patients. The persons in the photographs (Figure 1 and 4) are first author Juyeon Park (green gown), and the corresponding author Jong Bum Choi (white gown) who are demonstrating the tests.