Culture and standard susceptibility testing to antimicrobial agents should be performed in populations with a high clarithromycin resistance rate if standard clarithromycin-containing therapy is being considered [5]. However, culture and antibiotic resistance testing methods have many disadvantages, including requirements of time and laboratory equipment as well as strong technology and heavy workloads, limiting their widespread application in clinical practice. When standard susceptibility testing based on H. pylori isolation is not possible, molecular tests, such as polymerase chain reaction (PCR) or real-time PCR, can be used to detect H. pylori infection and clarithromycin resistance using gastric biopsy samples [8,9]. As H. pylori has a focal distribution in different parts of the gastric mucosa, false-negative results often occur with single-site gastric biopsy-based detection. In contrast, gastric juice, which contains constantly shed gastric epithelial cells and bacteria from the entire stomach, should be more suitable for detecting actual H. pylori infection [10].

Point mutations in the peptidyl transferase region of the 23S rRNA gene frequently confer macrolide resistance. The most common point mutations are A2143G (69.8%) and A2142G (11.7%), which account for more than 80% of clarithromycin resistance [11]. Other mutations, such as A2142C, A2115G, G2141A, T2717C, A2115G, G2141A and A2142T, are rarely observed [12, 13]. Another important effect on eradication may be polymorphisms of the cytochrome P450 (CYP2C19) gene, the genotype of which determines the metabolic rate of PPI in the human liver. For example, the CYP2C19 wild-type allele (CYP2C19*1) has high enzymatic activity compared to the mutant-type CYP2C19*2 and CYP2C19*3 alleles. CYP2C19*2 and CYP2C19*3 are located in the fifth (G681A) and fourth (G636A) exons, respectively. Accordingly, the CYP2C19 phenotype has been classified into three groups: homozygous extensive metabolizers (Hom-EMs), heterozygous extensive metabolizers (Het-EMs) and poor metabolizers (PMs) [14,15].

In this study, we established an easy and accurate diagnostic technology based on gastric juice to identify H. pylori infection, H. pylori clarithromycin susceptibility and CYP2C19 gene polymorphisms in patients.

A total of 44 DNA samples, including 28 samples from common non-H. pylori bacteria isolated from the gastric mucosa, 15 enterobacterial samples and one human tissue sample, were provided by the Department of Communicable Disease Diagnostics, National Institute for Communicable Disease Control and Prevention, Chinese Centre for Disease Control and Prevention (see the supplement, Table S1).

Patients at Peking University Third Hospital with dyspeptic symptoms were enrolled from January 2013 to November 2014. In total, 178 patients were randomly selected in this trial, including 105 cases that were both rapid urease test (RUT) strongly positive (becoming red within 2 min) and histology test (Warthin-Starry silver staining) positive and 73 cases that were negative for both RUT (no colour change within 2 hours) and histology. We considered the 105 cases as the HP-positive group and the remaining 73 cases as the HP-negative group. Of the subjects, 90 were women and 88 men, with ages ranging from 19 to 68 years (mean±SD, 41.6±12.8). Four gastric mucosa biopsies and 5-10 mL of fasting gastric juice specimens were collected by gastrointestinal endoscopy examination. None of the patients received any H. pylori eradication therapy, including antibiotics and acid-suppressive drugs (PPIs, H2-receptor antagonists, bismuth agent, or antacids). For details, refer to the supplementary information (Table S2).

The study was approved by the independent Ethics Committee of Peking University Health Science Centre (IRB00001052-0709) and by the Research Ethics Committee of the National Institute for Communicable Disease Control and Prevention (No: ICDC-2013001) and was performed in accordance with the ethical guidelines of the Declaration of Helsinki, Good Laboratory Practices and Good Clinical Practices. Written informed consent was obtained from each patient prior to study enrolment.

One piece of a gastric biopsy sample was homogenized using a sterile glass homogenizer. Half of the gastric biopsy tissue homogenate was directly used for DNA extraction. Approximately 1 mL of gastric fluid was neutralized with an equivalent amount of Tris-HCl (0.67 mol/L, pH 7.4). The mixture was mixed well and centrifuged at 13,000 rpm for 10 minutes. The supernatants were removed, and the pellets were reserved. Genomic DNA was extracted using the QIAamp DNA Mini Kit (QIAGEN, Germany).

The other half of the homogeneous solution was uniformly coated onto the surface of a Karmali agar plate supplemented with 7% defibrinated sheep blood (Biotek Medical Device Co., Ltd., Beijing, China) and an appropriate H. pylori selective supplement (OXOID, England). The plates were incubated for 2-7 days in a microaerophilic environment (5% O2, 10% CO2 and 85% N2) at 37°C. The isolates were identified by Gram staining, and positivity was confirmed by urease, oxidase and catalase traits. Clarithromycin susceptibility was assessed by the E-test, with the addition of 200 μL of inoculum onto plates, which was equivalent to the McFarland 2 opacity standard (8.8 ×107), and incubation for 2 days in a microaerophilic environment at 37°C. Isolates were considered resistant when the minimal inhibitory concentration (MIC) value was more than 2 μg/mL.

Four pairs of specific primers focused on target genes were used to confirm the presence of H. pylori, H. pylori 23S rRNA gene mutations and CYP2C19*2 and CYP2C19*3 genotypes in the gastric biopsy specimens. The primer sequences are shown in table 1. All of the PCR reactions were performed in a 25-µL volume containing 12.5 μL 2× Easy Taq® PCR SuperMix (Transgene, Beijing, China), 0.5 μL forward and reverse primers (2 μL each), 2 μL template DNA and 9.5 μL nuclease-free water. The PCR amplifications were performed under the following conditions: denaturation at 94°C for 5 min, 40 cycles of denaturation at 94°C for 30 seconds, annealing at 55°C for 30 seconds, and extension at 72°C for 30 seconds, and a final extension at 72°C for 7 min. The amplification products were analysed by 1.5% agarose gel electrophoresis. Positive products were sequenced using both forward and reverse primers.

Five primers and nine matching Taqman probes targeting the H. pylori cagH and 23S rRNA genes and the human RnaseP, CYP2C19*2 and CYP2C19*3 genes were designed for this assay. All sequences obtained from NCBI Entrez Nucleotide Database (http://www.ncbi.nlm.nih.gov/nuccore) were aligned using Vector NTI alignment software (http://www.lifetechnologies.com/cn/zh/home/life-science/cloning/vector-nti-software.html). The primers and probes were designed using Primer Express 3.0 software (Applied Biosystems). The sequences of the primers and probes used in this study are summarized in table 2.

The specificity of the cagH probe in the real-time PCR was assessed using bacterial DNA from 28 common bacteria in addition to H. pylori from gastric mucosa and 15 enterobacteria.

To assess the sensitivity of this assay, we constructed recombination plasmids containing a target gene or point mutation from the reference strains. To evaluate the detection limit of each probe in this assay, a series of 10-fold dilutions of the recombination plasmids ranging from 1×109 copies/μL to 1×100 copies/μL were used as the template. Simultaneously, the correlation coefficient R and amplification efficiency of each primer/probe were determined using standard curves based on 10-fold serial dilutions of the recombinant plasmids.

To evaluate assay precision, the intra- and inter-assay variability were evaluated to reveal the corresponding repeatability and reproducibility, respectively. High, medium and low plasmid concentrations (1×107 copies/μL, 1×105 copies/μL, and 1×102 copies/μL, respectively) were used as the template. To estimate intra-experimental variation, nine positive standard plasmids with different copy numbers were detected three times in the same experiment. To determine inter-experimental variation, the same plasmids were tested on different days in three different experiments. All 178 gastric juice samples were detected by this multiple real-time PCR approach, and the results were compared with those obtained by culture and gastric biopsy-based PCR.

A P value <0.05 was considered significant. All statistical tests and figures in our study were prepared using R statistical software version 3.3.1 (http:// www.r-project.org/).

In the H. pylori-positive group, the positive rates obtained using culture, PCR, and gastric biopsy- and gastric juice-based real-time PCR assays were 90.48% (95/105), 92.38% (97/105), 97.14% (102/105) and 100% (105/105), respectively. The consistency rate for all four H. pylori infection diagnostic methods was 89.52% (94/105). Four discrepancies occurred between the culture and PCR methods, including three cases with positive PCR results but negative culture results and one case with a positive culture result but a negative PCR result. Ten false-negative results were found by cultures, eight by PCR and three by gastric biopsy-based real-time PCR.

Comparison of the performances of culture, PCR and real-time PCR for the diagnosis of H. pylori infection

For these false-negative cases, both the H. pylori-specific ureB and the 23S rRNA gene fragments could be amplified from the corresponding gastric juice specimen, and these PCR products were confirmed by nucleotide sequencing. In the H. pylori-negative group, no false-positive results were found in the gastric biopsy or gastric juice samples by PCR or real-time PCR. The significance levels for sensitivity, specificity, positive predictive value (PPV) and negative predictive value (NPV) among the different methods are displayed in table 3. 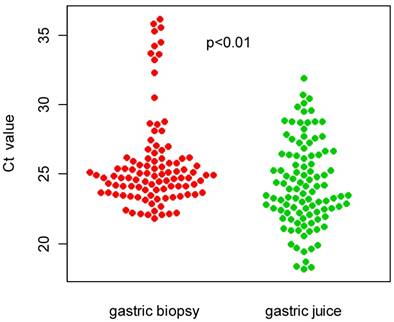 Regarding clarithromycin susceptibility, we found 82.98% (78/94) concordance among the different methods for the 94 H. pylori-positive cases, which consisted of 40 clarithromycin-susceptible cases and 38 clarithromycin-resistant cases. The discrepancies accounted for 15.24% (16/94) of the discordance among the methods. These discrepancies suggest inconsistency between the genotype and phenotype. In three cases, both resistant and susceptible genotypes were detected simultaneously by PCR and real-time PCR using both gastric biopsy and gastric juice specimens, whereas E-test results showed only phenotypic resistance or susceptibility. The resistant-to-susceptible ratios detected by real-time PCR for gastric juice were 1.16, 3.44, and 8.26.

Because tailored treatment based on 23S rRNA mutations and CYP2C19 polymorphisms yield a higher H. pylori eradication rate than the empirical standard triple therapy, H. pylori susceptibility to clarithromycin and the human CYP2C19 genotype should be evaluated. Culture and the E-test are often employed to determine the clarithromycin susceptibility phenotype, whereas PCR with nucleotide sequencing is used to identify 23S rRNA and CYP2C19 genotypes. However, these classic genotype methods are usually time-consuming and have notable laboratory equipment requirements, which are not applicable in daily clinical practice. In our study, the gastric juice-based real-time PCR was completed within 1 hour and 40 minutes (not including DNA extraction). We found 82.97% (78/94) concordance and 17.02% (16/94) discordance among the three methods using gastric biopsy or gastric juice samples. These discrepancies were most likely because the A2142G to A2143G ratio accounts for approximately 80% of all mutations causing clarithromycin resistance. The results are in agreement with the results reported in the literature [11]. Additionally, three mixed infections of susceptible and resistant strains were simultaneously detected by real-time PCR and PCR, whereas one infection was classified as susceptible and another two as resistant by culture. The resistant-to-susceptible ratios tested by real-time PCR were 1.16, 3.44, and 8.26. Thus, resistant strains play a major role in the entire gastric microenvironment, and we should avoid using clarithromycin when devising an administration scheme.

Despite the superior performance of our gastric juice-based real-time PCR, inevitable shortcomings exist. Some hot-spot mutations associated with clarithromycin resistance should be added to improve the detection accuracy. To enhance patient compliance and reduce discomfort, the string test can be adopted, instead of endoscopy, for collecting gastric juice. Indeed, obtaining gastric fluid specimens using the string test is suitable for large-scale population screening.

In summary, we established a gastric juice Taqman-MGB-based real-time PCR method that could conveniently and accurately determine the A2142G or A2143G mutation associated with clarithromycin resistance and the human CYP2C19 genotype. In this manuscript, we show that our method can overcome many flaws and deficiencies compared to the use of gastric biopsy specimens tested using various traditional detection methods. Four obvious advantages were observed: ① higher sensitivity of H. pylori diagnosis; ② low false-negative results caused by focal distribution; ③ precise instructions to assess H. pylori clarithromycin susceptibility, especially for coinfections with clarithromycin-resistant and susceptible strains; and ④ easier operation and a shorter time requirement. This gastric juice-based real-time PCR method demonstrated better performance than culture and gastric biopsy-based PCR. Thus, gastric juice-based real-time PCR is a more accurate method that can be used to guide individualized H. pylori eradication.