Methods: This was a multicenter, randomized, open-label, parallel-group trial in 15 clinical sites. Patients with stable angina, taking low-dose β-blockers (equivalent to metoprolol succinate 23.75-47.5 mg/day), and having a resting HR of ≥ 65 bpm were enrolled and randomized to either the metoprolol 95-mg group or the 190-mg group. The change in 24-h average HR from baseline recorded by Holter monitoring and the percentages of patients with resting HR controlled to ≤ 60 bpm were compared between the two groups.

Conclusions: The metoprolol succinate dose of 190 mg is superior to the 95 mg dose in terms of HR control, in Chinese patients with stable angina, low-dose β-blocker use and unsatisfactory HR control. Both doses were well tolerated.

Elevated heart rate (HR) is an independent risk factor for all-cause death and cardiovascular events in the general population [1,2] and in patients with various cardiovascular diseases, including hypertension [3] and coronary artery disease [4]. Current guidelines in China [5] and abroad [6] recommend that the objective of stable angina treatment is to reach a target resting HR of 55-60 bpm, if tolerated, or 50 bpm for patients who have severe angina without symptoms of bradycardia.

However, HR is not optimally controlled in patients with coronary heart disease (CHD) in clinical practice. According to the Prospective Observational Longitudinal Registry of Patients with Stable Coronary Artery Disease, 44.0% of the total 33,438 CHD patients and 41.1% of the 24,910 patients receiving various doses of β-blockers had a resting HR of > 70 bpm [7]. In China, the management of HR among CHD patients is also barely satisfactory; one national survey found that the average resting HR of patients with chronic angina pectoris who were on and off β-blockers was 75 bpm and 73 bpm, respectively [8].

β-blockers are among the most effective therapies for CHD. The clinical benefit and improvement in prognosis following β-blocker treatment in CHD patients have been associated with a reduction in resting HR [9]. In patients who have stable angina without contraindications, β-blocker therapy is recommended as a strategy to improve disease outcome and symptoms. Although β-blockers have been widely available in China for many years for the treatment of cardiovascular diseases, they are underused among CHD patients in common clinical practice. According to the Prospective Urban Rural Epidemiological study, only 6.8% of CHD patients in China had been prescribed β-blockers, which was far lower than the rate in the United States and in European countries (45.5%) [10]. On the other hand, a national survey conducted mostly in tertiary hospitals revealed a more favorable finding, wherein 61.1% of all patients were on β-blockers [8].

Physicians' knowledge and experience in using β-blockers can have some impact on the underutilization of these drugs and, consequently, on the incidence of elevated HR. A possible reason for their lack of prescription is the concern that Chinese patients may not have the same tolerance of the higher dose of β-blockers recommended in Western countries. However, these concerns are mostly based on personal experience rather than verified evidence. Thus, a study to address the issue of β-blocker underuse and poor HR control in Chinese CHD patients is warranted.

We report herein the findings of our study involving Chinese patients with stable angina and elevated HR who were taking a low dose of β-blockers. The patients were administered different doses of metoprolol succinate (95 mg vs. 190 mg), and their HR as well as other safety parameters were assessed.

This multicenter, randomized, open label, parallel group study was reviewed and approved by the Ethics Committee of Peking University First Hospital. The study was performed in accordance with the principles of the Declaration of Helsinki. Patients were enrolled into the study from October 2010 to September 2011.

The inclusion criteria of study were: 1) provision of informed consent prior to participation in the study; 2) Chinese patients aged 18-75 years; 3) resting HR ≥ 65 bpm; 4) diagnosed with stable angina for at least 1 month and with stable angina pectoris symptoms within 2 weeks prior to enrollment; 5) left ventricular ejection fraction (LVEF) ≥ 50% according to echocardiography; 6) on β-blockers for at least 4 weeks at a dosage equivalent to metoprolol succinate 23.75-47.5 mg/day. This population was intended to simulate the patients we commonly encounter in clinical practice who have been prescribed a low dose of β-blockers and yet exhibit elevated HR.

To determine the difference in 24-h average HR between the two treatment groups after two and eight weeks' treatment, a mixed model of repeated measures analysis was performed on the change in 24-h average HR. This approach assumed that missing observations were missing at random, and utilized all the available data for analysis. The model included treatment, study center, baseline 24-h average HR, visit, and treatment-by-visit interaction as explanatory variables. The study center was regarded as a random effect, while all other variables were treated as fixed effects. To model the covariance structure, an unstructured covariance matrix was used. If the algorithm did not converge for the data set, a first-order autoregressive covariance structure was employed. The primary contrasts of interest were the treatment differences between the 95-mg and 190-mg groups during the eight weeks of treatment.

For comparisons of continuous variables within groups, the paired t-test was used. Other continuous safety parameters were analyzed using the same method as used for analyzing the change in the 24-h average HR.

The percentage of patients whose resting HR was controlled to ≤ 60 bpm was analyzed in both intent-to-treat (ITT) and per-protocol populations for the two treatment groups after two and eight weeks of treatment. The comparisons were performed using a logistic regression model with factors fitted for treatment, treatment center, and baseline HR, and were presented as odds ratios (OR) with 95% confidence intervals (CIs). For comparisons within groups, McNemar's test was used.

Categorical variables were summarized by frequency and percentage of population. The incidence and severity of AEs were analyzed for each body system and preferred term for both treatment groups. All other safety data, including physical examination, vital signs, and laboratory data, were analyzed using descriptive statistics and frequency distributions.

There were no significant differences in the baseline data between the two treatment groups (Table 1). 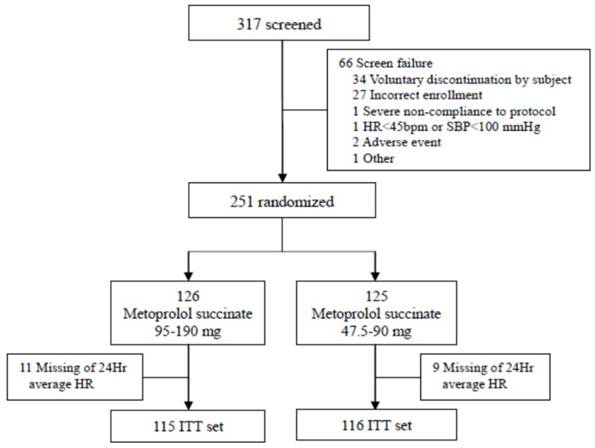 Characteristics of ITT patients in the two treatment groups

There was no significant difference between the two groups in the changes in fasting plasma glucose, total cholesterol, and triglyceride levels from baseline (Table 4).

Changes in blood chemistry from baseline after 8 weeks' treatment

The association between increased HR and overall cardiac mortality or other adverse outcomes in CHD patients has been well established by previous studies [4, 11-13]. A sub-analysis of the BEAUTIFUL study [14] showed that HR reduction by medication is related to better clinical outcomes in selected patients with CHD. Furthermore, a meta-regression analysis [15] demonstrated a statistically significant relationship between resting HR reduction by β-blockers and clinical benefits, including reductions in cardiac death (p < 0.001), all-cause death (p = 0.008), sudden death (p = 0.015), and recurrent non-fatal myocardial infarction (p = 0.024). Each 10 bpm reduction in HR is estimated to reduce the relative risk of cardiac death by 30%.

Researchers have long discussed the ideal range for target HR. The Framingham Heart Study showed that CHD mortality rates rose considerably with increasing HR, with the lowest mortality rate observed in patients with an HR < 65 bpm[16]. Moreover, according to an analysis of the Treating to New Targets (TNT) study based on a Cox proportional hazard model, a nadir HR of 52.4 bpm was associated with the lowest rate of AEs [17]. Based on established clinical evidence, the guidelines for the treatment of stable angina recommend a target resting HR of 55-60 bpm [4, 5]. Hence, we set the target HR at 60 bpm in the present study.

The effectiveness of β-blockers in controlling HR is well established. According to one report, atenolol, bisoprolol, and metoprolol were more effective than other β-blockers in managing resting HR in CHD patients [9]. Previous studies of multiple patient groups have demonstrated that changes in both 24-h average HR and resting HR were related to the dosage of β-blocker administered [18, 19]. In a study involving Chinese CHD patients who were β-blocker-naive, 42.5% and 79.4% of the patients achieved a HR of less than 70 bpm after one and two months of metoprolol succinate treatment, respectively [18]. Baseline HR and metoprolol succinate dosage were independent predictors of the resting HR two months after β-blocker therapy. The present study revealed that 190 mg metoprolol succinate has a better effect in reducing HR than a 95 mg dose, as seen by both the 24-h average HR and the percentage of patients with resting HR < 60 bpm after eight weeks of treatment. In general, the higher dose of the drug was well tolerated by patients. Although the data exhibited the same trend seen in earlier studies, the decrease in HR induced by the drug was less than previously reported values.

The change in HR following metoprolol succinate treatment observed in this study was relatively small, especially in the 95-mg group. There may be several reasons why the drug was less effective in these patients. Firstly, to simulate the common clinical population of patients who are on low-dose β-blocker medication and have an elevated HR, only patients who were on β-blocker therapy at a dose equivalent to 23.75-47.5 mg metoprolol succinate with HR ≥ 65 bpm were included in the present study. For these patients, who can tolerate a low dose of metoprolol succinate well, a higher dose of the drug may be needed to better block the β-receptors. It has been shown that the cardiac autonomic nervous system is impaired in CHD patients who have increased sympathetic nerve excitability [20]. Secondly, a higher dose of metoprolol succinate may result in a higher threshold for angina, allowing for increased physical activity and thus a higher daytime HR, which will increase the 24-h average HR. Moreover, as suggested by the MERIT-HF study [21], the dose-response relationship of metoprolol succinate may exhibit an exponential correlation, which partly explains the lack of efficacy of the 95 mg dose.

The possible difference in β-blocker tolerability between patients from China and Western countries is one of the reasons why physicians are reluctant to prescribe a high dose of these drugs in China. In the present study, metoprolol succinate was well tolerated by the majority of patients, without extreme HR reduction. Furthermore, patients treated with the higher dose of metoprolol succinate did not report additional AEs. The incidence of AEs during the study was comparable to that at 12 weeks of treatment with 5-7.5 mg ivabradine b.i.d or 12.5-25 mg atenolol b.i.d in Chinese patients with stable angina, where the reported incidence of all AEs was 27.4% [22], further supporting the proposition that 190 mg metoprolol succinate can be safely prescribed for Chinese patients.

There are several limitations to our investigation. Although this study was innovative in using the 24-h average HR as the primary outcome parameter, unlike previous studies it was not designed to obtain detailed HR information during the day. Additionally, β-blockers have different effects on resting and exercise HR; thus, the efficacy and tolerability of different drug doses would be better measured with additional parameters, such as the lowest and highest HR during the 24-h period. Furthermore, a group of patients who can tolerate only a low dose of β-blockers was not included in this trial. There may be differences in the effect of β-blockers on patient outcomes between those who are sensitive to these drugs and those who are not, independently of HR control. Hence, further studies are needed to address these questions.

A metoprolol succinate dose of 190 mg was superior to a 95 mg dose in controlling the HR of stable angina patients with elevated HR who were on a low-dose β-blocker therapy; the treatment was well tolerated by these patients. Only the administration of 190 mg metoprolol succinate achieved the treatment goal of controlling HR to ≤ 60 bpm in this patient population. Close follow-up and careful dose titration will be needed to achieve the goal for HR control in these patients.

The study is supported by AstraZeneca and there is no other competing interest.