AIM: To compare the clinicopathological features of pancreatic intraepithelial neoplasias (PanINs) and intraductal papillary mucinous neoplasms (IPMNs), and to investigate the role of hsa-miR-96 and hsa-miR-217 in these two lesions.

Conclusion: IPMN associated carcinomas were in a statistically earlier stage than PanIN- PDAs at the time of operation. Abnormal expression of hsa-miR-96 and of hsa-miR-217 was observed in premalignant lesions (PanINs and IPMNs) of pancreatic carcinoma and down-regulated with increasing grades of PanINs and IPMNs. These microRNAs may serve as potentially early biomarker and act as tumor suppressor genes.

Pancreatic ductal adenocarcinoma (PDA) is one of the most fatal of all human cancers, characterized by rapid progression and early metastasis. Pancreatic intraepithelial neoplasias (PanINs) and intraductal papillary mucinous neoplasms (IPMNs) are the most common premalignant lesions of PDAs [1]. IPMNs are grossly and radiographically visible tumors with the diameter of more than 1 cm, whereas PanINs are usually less than 0.5cm and must be diagnosed microscopically [2].

PanIN, as spectrum of ductal proliferative lesions, is graded on a three-tiered scale: PanIN-1, PanIN-2, and PanIN-3. Generally, PanIN-1 is considered to be a low-grade lesion, whereas PanIN-2 and PanIN-3 are considered to be high-grade lesions. High-grade PanINs and PDAs have been reported to display similar genetic alterations, including KRAS mutation and the silencing or inactivation of tumor suppressor genes such as p16, p53, SMAD4, and cyclin D1 [3-5] . Low-grade PanINs may present telomere shortening and some gene mutations, such as KRAS, prostate stem cell antigen (PSCA), mucin 5, and fascin.

IPMNs are slow-growing cystic tumors with a favorable prognosis, characterized by intraductal papillary proliferation of mucin-producing cells. IPMNs tend to progress from adenomatous lesions (IPMN with low- and intermediate- grade dysplasia) to high-grade dysplasia, and finally to invasive carcinomas (IPMN-associated carcinomas), which exhibit the highest degree of architectural and cytological atypia. Genetic studies have established that mutations of KRAS, PI3KCA, STK11/LKB1 were the most common molecular alterations in IPMNs [6, 7].

MicroRNA (miRNA) is an endogenous non-coding single-stranded small RNA of 19 to 24 nucleotides (nt) in length that regulate gene expression at the post-transcriptional level. By complementary base pairing with the 2-8 nt seed sequence at 5' end, mature miRNA binds to the 3'-untranslated region (3'-UTR) of the target mRNA sequence, suppressing its translation and/or leading to its degration. The resulting inhibition of gene expression plays a role in the regulation of oncogenes or tumor suppressor genes [8, 9]. In human body, 20% to 30% of protein-encoding genes are regulated by miRNAs [10]. Together with the corresponding human genes and proteins, miRNA forms a complex and precise regulatory network. In recent years, many studies have confirmed that various tumor tissues show changes in their miRNA expression profiles [11]. A growing body of literature has confirmed that miRNA have tumorigenic or tumor suppressor functions. Recent studies also identified a large number of abnormally expressed miRNAs in PDAs [12-14], for example, has-miR-96 and has-miR-217, targeting KRAS, have been proved to be down-regulated by microarray technology and quantitative PCR [12, 15, 16]. Considering KRAS is the only mutated gene found in both panINs and IPMNs, we choose these two microRNAs as our study objects.

To address the potential role of hsa-miR-96 and hsa-miR-217 in the carcinogenesis of PDA, we analyzed their expression in premalignant lesions including IPMNs and PanINs, as well as associated PDAs using the method of locked nucleic acid in situ hybridization (LNA-ISH).

Patients who underwent partial or total pancreatectomy at Peking Union Medical College Hospital were enrolled. 45 PDAs, 58 PanINs (23 PanIN1, 17 PanIN2, 18 PanIN3) and 57 IPMNs were selected. Of the 58 PanINs, 11 PanIN1, 16 PanIN2 and 18 PanIN3 were in the adjacent normal tissue of PDAs. The other PanIN2 was selected from non-tumor tissue of acinar cell carcinoma. The other PanIN1 were selected from 6 cases of chronic pancreatitis, 5 cases of mucinous cystadenomas, and 1 case of solid pseudopapillary neoplasm. All tissues were treated by 10% neutral formalin fixation for 8-24 hours, paraffin embedding, sectioning, and hematoxylin & eosin (H&E) staining. All sections were reviewed by two pathologists according to the diagnostic criteria proposed by the 2010 edition of the WHO classification system for digestive neoplasms. The cases with disagreement were consulted to a third expert pathologist.

After the 4 μm paraffin sections were incubated at 60 ℃ for 1 hour, they were deparaffinized, and washed with DEPC-treated PBS. The slides were then incubated with 10 μg/ml of proteinase K at 37 ℃ for 10-20 minutes to remove the proteins and expose the RNA. They were next washed with PBS containing 0.2% glycine for 30 seconds to terminate the digestion and fixed with 4% paraform aldehyde for 10 minutes. Subsequently, the slides were pre-hybridized in hybridization buffer without probe for 2 hours at the probe Tm of 21 ℃. The probe was diluted to 20-60 nM in a hybridization buffer, and 20 μl of hybridization solution containing probe was added onto each slide. The slide was covered with a special cover-slip, and the edges were sealed to prevent drying. The hybridization time was 20.5 hours. After stringent washing with 2×SSC and 2×SSC containing 50% acrylamide at the hybridization temperature, the slides were blocked with a blocking buffer (PBST containing 2% goat serum and 2 mg/mL bovine albumin) for 1 hour. After the blocking solution was removed, one drop of anti-DIG-AP Fab antibody was added, and the slides were incubated overnight, followed by staining with NBT/BCIP at room temperature in a moist chamber for approximately 24 hours and routine dehydration and mounting. The slides were observed under a microscope. The U6 probe was applied to calibrate the system. The scrambled probe served as negative control, and the expression of normal pancreatic tissue served as positive control.

Positive miRNA in situ hybridization was evidenced by the appearance of blue or purple granules in the cytoplasm and the nucleus of pancreatic acinar and ductal cells, serving as positive internal control. U6-positive staining was observed in the nucleus. Scramble-miRNA, serving as negative control, did not show positive staining. A semi-quantitative integration method was used to determine the results. The LNA-ISH results were scored based on the intensity of hybridization as 0 (no expression or weak expression), 1 (moderate expression), and 2 (strong expression). The scoring of the number of positive cells was designated as 0 (positive cells <1%), 1 (1%-50% positive cells), and 2 (positive cells ≥ 50%) [17]. The above two scores were multiplied, and a product of 0 indicated negative expression, 1 indicated weak positive expression, and 2-4 indicated strong expression.

All results were analyzed using SPSS statistical software. The differences between groups were compared using the χ2 test. P value < 0.05 was considered as statistically significant.

We compared the clinical and pathological features of PanIN-PDAs and IPMN with an associated carcinoma in Table 2. PanIN-PDAs demonstrated more aggressive behavior, as measured by higher percentage of outside-pancreas invasion (p=0.033), increased rate of lymph node metastases (p=0.0004) and a higher percentage of poorly differentiated carcinoma (p<0.001). There were no statistical differences in patients' sex or age between two groups. In addition, PDAs tend to be present at an advanced stage, with only 2/45 cases in AJCC I, comparing to 11/26 of IPMN associated carcinomas (p=0.0018).

The clinical and pathological features of PanIN-PDAs and IPMN associated carcinomas.

Expression of hsa-miR-96 and hsa-miR-217 in PanINs 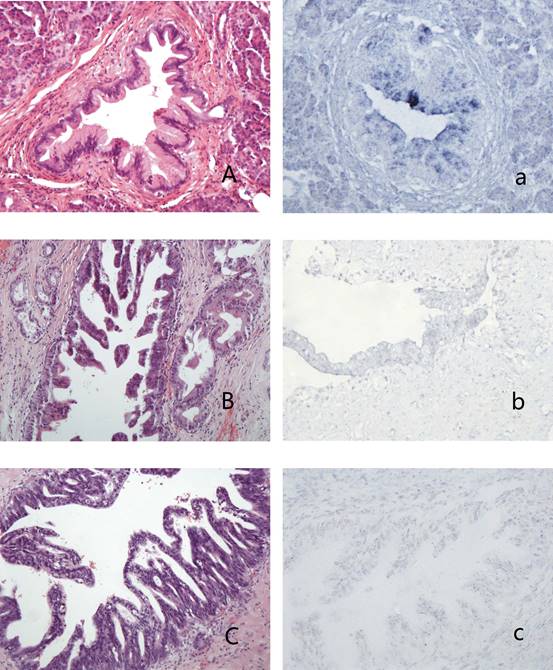 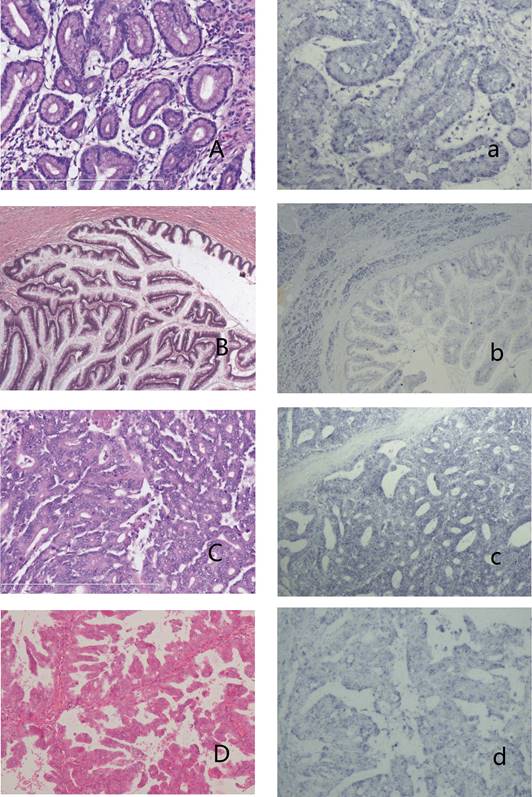 PanINs and IPMNs are the most common premalignant lesions of PDAs, playing an important role in early diagnosis and treatment. PanINs are relatively common incidental finding. More than 30% elderly people, especially those over 60s [18], have foci of PanINs in their pancreas. In addition, foci of PanINs can be found in more than 80% individuals with PDAs and 60% individuals with chronic pancreatitis [19]. PanIN3 are accompanied with pancreatic carcinoma, and do not present in pancreas without invasive carcinoma. PanIN2 can occasionally be found in pancreas without cancer. Intraductal lesions of the pancreas are being detected much more frequently. IPMNs currently account for approximately 8-20% of all resected pancreatectomy specimens [20-23], and the incidence is rising. Traditionally, PanINs are supposed to be originated from the intralobular and interlobular ductus, while IPMNs come from main duct and branch ducts. The epithelium lining small ducts and large ducts are similar in morphological features. However, the small duct-derived PanINs and the large duct-derived IPMNs show different molecular alterations. Whether there are differences in miRNAs expression between these two lesions is worth investigating.

Many studies focusing on microRNAs in pancreatic tumors have confirmed that pancreatic cancers exhibit abnormal expression of miRNAs [24], including up-regulated miR-21, miR-155, miR-221, and miR-210 [25-27], as well as down-regulated miR-148a/-148b, hsa-miR-96, and hsa-miR-217 [15,16,28]. There are more and more microRNAs with established functions and known related genes and proteins. MiR-21 and miR-155, showing aberrant expression in PanINs and IPMNs, have been widely studied. They contribute to the aggressive behavior and poor prognosis of PDAs, and may act as a marker for early detection [25, 29].

It is difficult to detect miRNA through in situ hybridization methods, particularly in paraffin-embedded tissues. Locked nucleic acid oligomers may provide high-sensitivity probes to detect miRNA [30]. LNA-ISH combined with the NBT/BCIP staining system is proved to be a useful technique for identifying of miRNA expression in formalin-fixed, paraffin-embedded (EFPE) tissues [31]. LNA-ISH becomes a useful tool to study miRNA expression in pancreatic carcinomas.

To date, a few studies of hsa-miR-96 and hsa-miR-217 in PDAs have been conducted. By miRNA microarray hybridization and quantitative PCR, our previous studies confirmed that the expression of hsa-miR-96 and hsa-miR-217 in pancreatic cancer tissue and cell lines was significantly reduced comparing with normal pancreatic tissue [15, 16]. Szafransk et al. also demonstrated that hsa-miR-217 was down-regulated in cell lines and pancreatic cancer tissues using Quantitative RT-PCR and TaqMan real-time PCR [12, 32].

The expression of hsa-miR-217 and hsa-miR-96 in PanIN3 showed no significant difference from PDAs, but decreased significantly in PanIN2 and PanIN1, indicating high-grade dysplasia share more similarities with carcinoma. This finding is in agreement with gene expression profile. Significant decline of miRNA-217 expression was observed with increasing degree of cell atypia in PanINs, but not in IPMNs with different degree of dysplasia.

The expression of miRNA-96 was significantly different between IPMN and IPMN associated carcinoma (p=0.009), suggesting that it may be a potential marker to distinguish benign and malignant intraductal lesions before operation, though further studies are expected. No difference was observed of miRNAs in the same grade cell atypia between PanINs and IPMNs, raising the possibility that its expression may not be associated with different histological type, but with different degree of cell atypia instead.

Previous studies revealed that hsa-miR-96 and hsa-miR-217 may regulate the expression of K-RAS [15, 16]. K-RAS mutations are detected in more than 90% of human pancreatic cancers [17], and at the early stage of PanINs and IPMNs. Therefore, it is considered to be one of the earliest genetic changes and a key factor in the progression of PDAs [33-36]. We had expected to establish a connection between miRNAs and k-ras protein level, by detecting the changes of k-ras protein expression between different grades of PanINs using immunohistochemical staining. However, no good k-ras antibody was available for a credible result.

In conclusion, with the LNA-ISH system, we found that hsa-miR-96 and hsa-miR-217 were down-regulated in PanIN1 and IPMAs, with a decline during the transition from premalignant lesions to PDAs. Therefore, hsa-miR-96 and hsa-miR-217 may play a potential tumor suppressor role in the development of PDA and may serve as biomarkers for the detection of early lesions of PDA.