Objectives: To determine whether the soluble programmed cell death ligand 1 (sPD-L1) levels in patients with chronic hepatitis C (CHC) are associated with the clinical features of the disease and the efficacy of treatment, including interferon (IFN)-α.

Methods: We investigated the sPD-L1 levels in the sera of 80 genotype 1b Japanese patients with CHC who underwent 12 weeks of telaprevir (TVR)- or simeprevir (SMV)-based triple therapy followed by 12 weeks of dual therapy with pegylated IFN-α plus ribavirin. Serum was also obtained from 22 patients with chronic hepatitis B (CHB) and from 10 healthy donors (HC). The sPD-L1 levels were measured using an ELISA kit. In addition, we examined the PD-L1 expression on the cell surface of immortalized hepatocytes (HPT1) after incubation with cytokines, including IFN-γ.

Conclusions: In this study, we first found that sPD-L1 was increased in patients with CHC. Our results indicate that the level of serum sPD-L1 might be associated with the progression of CHC and the generation of hepatocellular carcinoma.

Chronic hepatitis C virus (HCV) infections affect approximately 130-170 million people worldwide and are associated with a greatly increased risk of developing liver cirrhosis and hepatocellular carcinoma (HCC) [1, 2]. Dysfunction of virus-specific CD8+ cells was demonstrated to be a fundamental property of persistent viral infections, such as HCV [3, 4]. In chronic viral infection, the persistent exposure to high concentrations of viral antigens leads to various degrees of T-cell functional impairments called T-cell exhaustion [5-7]. Previous studies have indicated that the interaction between programmed cell death-1 (PD-1) and its ligands plays a critical role in T-cell exhaustion [8]. PD-1 has been shown to be upregulated in HCV-specific CD8+ cells, indicating that PD-1 upregulation may be an essential mechanism for viral immune escape in chronic HCV infections [9-11].

PD-1 is a key immune-checkpoint receptor expressed by activated T cells, B cells, and myeloid cells, and it delivers inhibitory signals by interacting with its two major ligands: programmed cell death ligand-1 (PD-L1) and -2 (PD-L2) [12]. PD-L1 (B7-H1) is largely expressed in both hematopoietic and parenchymal cells, and PD-L2 (B7-DC) is mainly expressed in macrophages and dendritic cells [13]. In tumor tissues, activated T cells can encounter the immunosuppressive PD-L1 and PD-L2, and both ligands are expressed by tumor cells and microenvironment, as described for lymphoproliferative diseases [14]. Recent studies have shown that antibody-mediated interference with PD-1 caused the regression of several tumor types, including melanoma, renal cell carcinoma (RCC), and non-small cell lung cancer, in some patients [3]. The expression of PD-L1 is induced by inflammatory cytokines, such as interferon (IFN)-γ or interleukin-10 [16]. Moreover, it has been shown that a soluble form of PD-L1 (sPD-L1) can be detected in the sera of patients, which correlates with the amount of PD-L1 expressing cells [16].

An increase of sPD-L1 was reported in patients with malignancies, including multiple myeloma (MM) [17], RCC [18], and diffuse large B-cell lymphoma (DLBCL) [12]. Moreover, a recent study showed that a high sPD-L1 level was a possible prognostic indicator for a poor outcome in hepatocellular carcinoma (HCC) patients [15]. Although the PD-1/PD-L1 inhibitory pathway was shown to be associated with the T-cell dysfunction seen in chronic HCV infection [3], the involvement of sPD-L1 in the immunopathogenesis of CHC has yet to be determined. Therefore, we hypothesized that the level of sPD-L1 might be associated with clinical features, such as the severity of inflammation, the progression of fibrosis, carcinogenesis, and especially the efficacy of treatment including IFN-α, which has been shown to induce the expression of PD-L1, in patients with CHC.

Before the introduction of direct-acting antiviral agents (DAA), pegylated IFN (PegIFN)-α and ribavirin (RBV) were the standard treatments for HCV genotype 1 infections. However, with the approval of telaprevir (TVR), an HCV non-structural 3/4A (NS3/4A) protease inhibitor, the TVR-based triple therapy has led to an improved sustained virological response (SVR) rate compared with PegIFN-α monotherapy and PegIFN-α plus RBV dual therapy [19, 20]. However, the TVR-based triple therapy is associated with an increased severity and rate of adverse events, including skin rash, pruritus, anemia, and anorectal diseases [20, 21]. Simeprevir (SMV) is a second-generation oral HCV NS3/4A protease inhibitor with antiviral activity against HCV genotype 1, 2, 4, 5, and 6 infections [22]. The SMV-based triple therapy showed a favorable efficacy without inducing severe dermatologic and hematologic toxicities [23]. In the present study, we aimed to determine whether the sPD-L1 levels in patients with CHC were associated with clinical features of the disease and the efficacy of TVR- and SMV-based triple therapies, including IFN-α. Moreover, the expression of PD-L1 in hepatocytes was examined after stimulation with IFN-γ.

This study enrolled two groups of 40 HCV genotype 1b Japanese patients who received 12 weeks of TVR-based or SMV-based triple therapies, followed by a 12-week dual therapy that included PegIFN-α and RBV. The median age was 63 years (range: 28-84 years). Twenty-two patients with chronic hepatitis B (CHB) (11 male and 11 female, median age 57 (30-76) years) and 10 healthy donors (5 male and 5 female, median age 64 (50-71) years) were used as controls. Serum samples were collected from each patient or healthy donor.

According to the prior treatment response, relapse was defined as undetectable HCV during and at the end of treatment, with HCV RNA positivity occurring later. A non-responder was defined as detectable HCV RNA for more than 24 weeks. Patients with decompensated liver cirrhosis, HCC, co-infection with hepatitis B virus or human immunodeficiency virus, autoimmune hepatitis, primary biliary cholangitis, hemochromatosis, or Wilson's disease were excluded from the study. Patients with uncontrollable hypertension or diabetes mellitus, chronic renal failure, depression, and those with a history of alcohol abuse, were also excluded. Information regarding the patient profiles is shown in Tables 1 and 2.

The baseline and follow-up tests for HCV viremia were performed using a real-time polymerase chain reaction (PCR) assay (COBAS TaqMan HCV test, Roche Diagnostic, Tokyo, Japan) with a lower limit of quantitation of 15 IU/mL and a linear dynamic range of 1.2-7.8 log IU/mL. The core amino acid substitutions at positions 70 and 91 of the HCV genome were determined by direct sequencing, as reported previously [24].

Serum levels of sPD-L1 were examined using a specific enzyme-linked immunosorbent assay (ELISA) kit from Cusabio Biotech (Wuhan, China) according to the manufacture's protocol. Each sample was tested in duplicate. The detection limits for ELISA was 3.9 pg/ml.

Continuous data from patients are expressed as the median with the interquartile range. The significance of differences was analyzed statistically with the Chi-square, Fisher's exact test, or the Mann-Whitney U test, as appropriate, using SPSS software (Ver.18, SPSS Inc., Chicago, IL, USA). Correlations between parameters were determined by linear regression analysis. In all cases, the level of significance was set as P <0.05.

The patient characteristics in the CHC, CHB, HC, TVR, and SMV groups are summarized in Tables 1 and 2. The analysis of the pretreatment factors revealed that serum asparate aminotransferase (AST), alanine aminotransferase (ALT), and alpha-fetoprotein (AFP) in the patients with CHC were significantly high compared with HC, although there were no significant differences in the serum ALT levels between the patients with CHC and CHB (Table 1). Among the patients with CHC, the baseline hemoglobin level and the number of patients infected with HCV with a mutation at position 91 of the HCV core protein were significantly higher in the TVR group compared with the SMV group (P = 0.034 and 0.012, respectively), but there was no significant difference in the other examined factors between the TVR and SMV groups (Table 2). 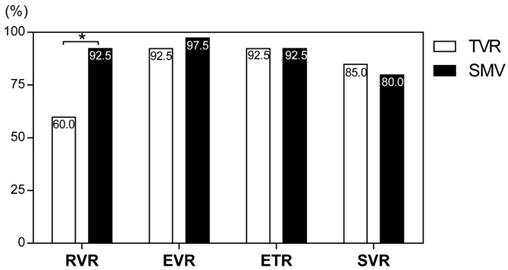 Induced expression of PD-L1 on hepatocytes 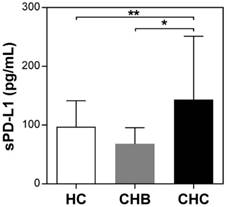 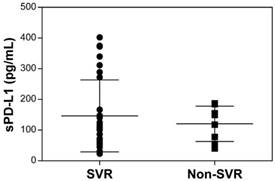 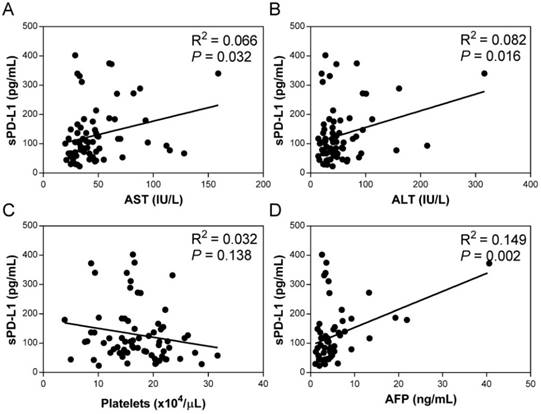 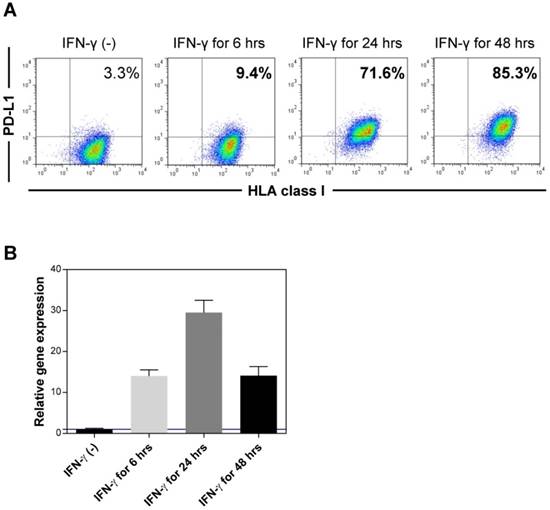 An increase of sPD-L1 was reported in patients with several malignant diseases, MM [17], RCC [18], and DLBCL [12]. Wang et al. reported that patients with MM had higher sPD-L1 concentration than healthy controls, and higher sPD-L1 levels were an independent prognostic factor for shorter progression-free survival [17]. In the patients with RCC, higher preoperative sPD-L1 levels were reported to be associated with lager tumors, tumors of advanced stage and grade, and tumors with necrosis [18]. Rossille et al. reported that among the patients with DLBCL, elevated sPD-L1 was associated with a poorer prognosis, and the sPD-L1 levels dropped back to a normal value after complete remission [12]. These reports may suggest that sPD-L1 could outline T-cell inhibitory signals and therefore mirror the anti-immune response of the diseases.

An increase in serum sPD-L1 was also reported in patients with non-malignant diseases such as systemic sclerosis [28] and type 2 diabetes mellitus (DM) [29]. Yanaba et al. reported that serum sPD-L1 levels positively correlated with the severity of skin sclerosis in the patients with systemic sclerosis [28]. Shi et al. reported that the levels of sPD-L1 in patients with type 2 DM were higher compared with healthy donors and that the increase in sPD-L1 was closely associated with the severity of diabetic atherosclrelotic macorovasucular diseases, especially acute coronary syndrome [29]. Therefore, they speculated that sPD-L1 may contribute to continuous T cell activation and development of diabetic macrovascular diseases [29]. Abnormal increase of sPD-L1 may intervene in the PD-1/PD-L1 inhibitory pathway and participate in the chronic autoimmune response and pathological progress of inflammation [29]. Considering the positive correlation between the sPD-L1 and ALT levels, the increase of sPD-L1 may also contribute to T-cell activation in patients with CHC, which results in an increase in the ALT levels.

We found that the expression of PD-L1 was induced on immortalized hepatocytes by IFN-γ, which was consistent with previous reports that describe how PD-L1was induced in primary human liver cells and hepatoma cells by viral infection and by IFN-α and -γ [30]. Mühlbauer et al. also reported that the PD-L1 expression on hepatocytes induced apoptosis in T cells by in vitro coculture of hepatocytes with T cells, and the authors speculated that the PD-L1 expression in hepatocytes may contribute to hepatic tolerance induction by deletion of activated T cells through the induction of apoptosis [30]. Although we did not examine the sPD-L1 in the supernatant of immortalized hepatocytes, Chen et al. reported that the existence of sPD-L1 was associated with PD-L1 expressed on the cell surface and that the release of sPD-L1 was, at least in part, associated with matrix metalloproteinase [16]. Therefore, we speculated that the increase of sPD-L1 in the patients with CHC might result from the induction of PD-L1 in hepatocytes due to inflammatory cytokines including, IFN-γ.

In conclusion, we first found that sPD-L1 was increased in the sera of patients with CHC, although no association between the sPD-L1 levels and the efficacy of TVR- or SMV-based triple therapy was defined. Our results indicated that the level of serum sPD-L1 might be associated with the progression of CHC and the generation of hepatocellular carcinoma. Although the particular role of sPD-L1 requires further investigation, this study suggested that sPD-L1 might be involved in the immune pathogenesis of CHC.

This word was supported by Grants-in-Aid for Scientific Research (C) (15K08991 to S.Y.) and (B) (26293175D to S.T.) from Japan Society for the Promotion of Science (JSPS) and the Project Promoting Clinical Trials for Development of New Drugs and Medical Devices (Japan Medical Association) (15bm05040003h0205 to S.T.) from Japan Agency for Medical Research and Development, AMED.